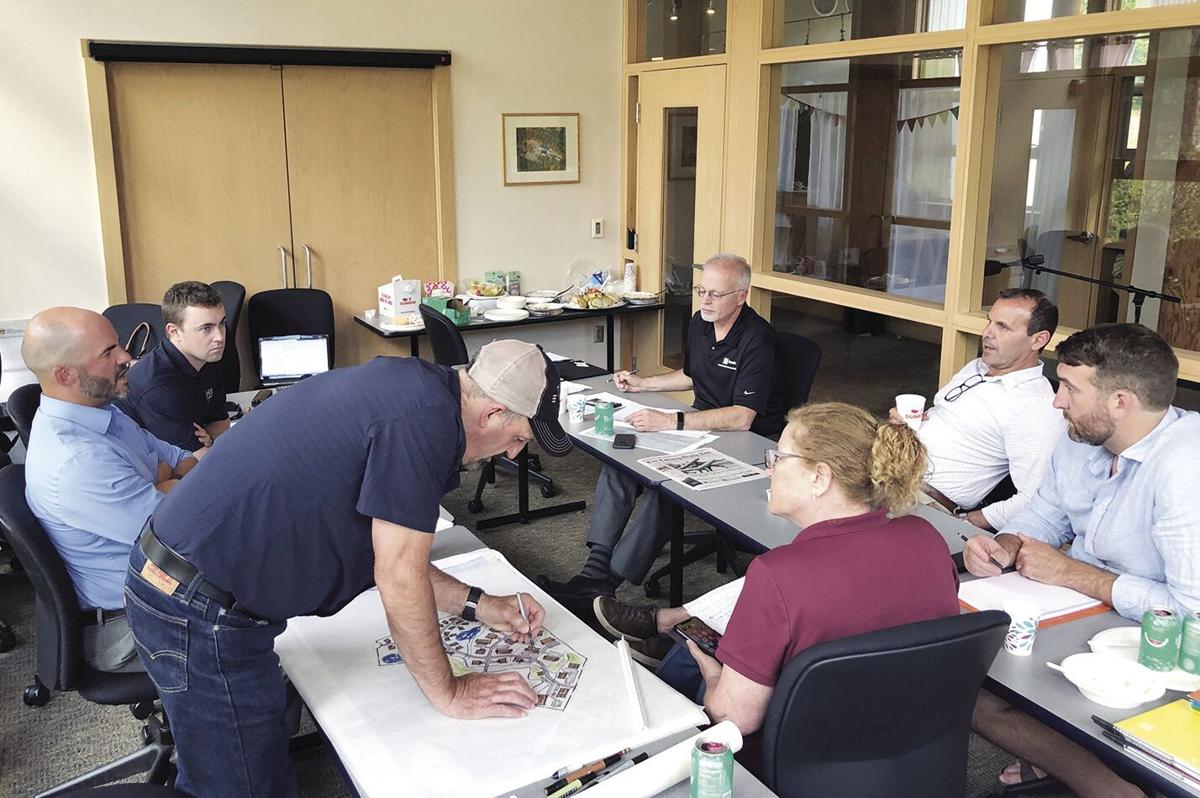 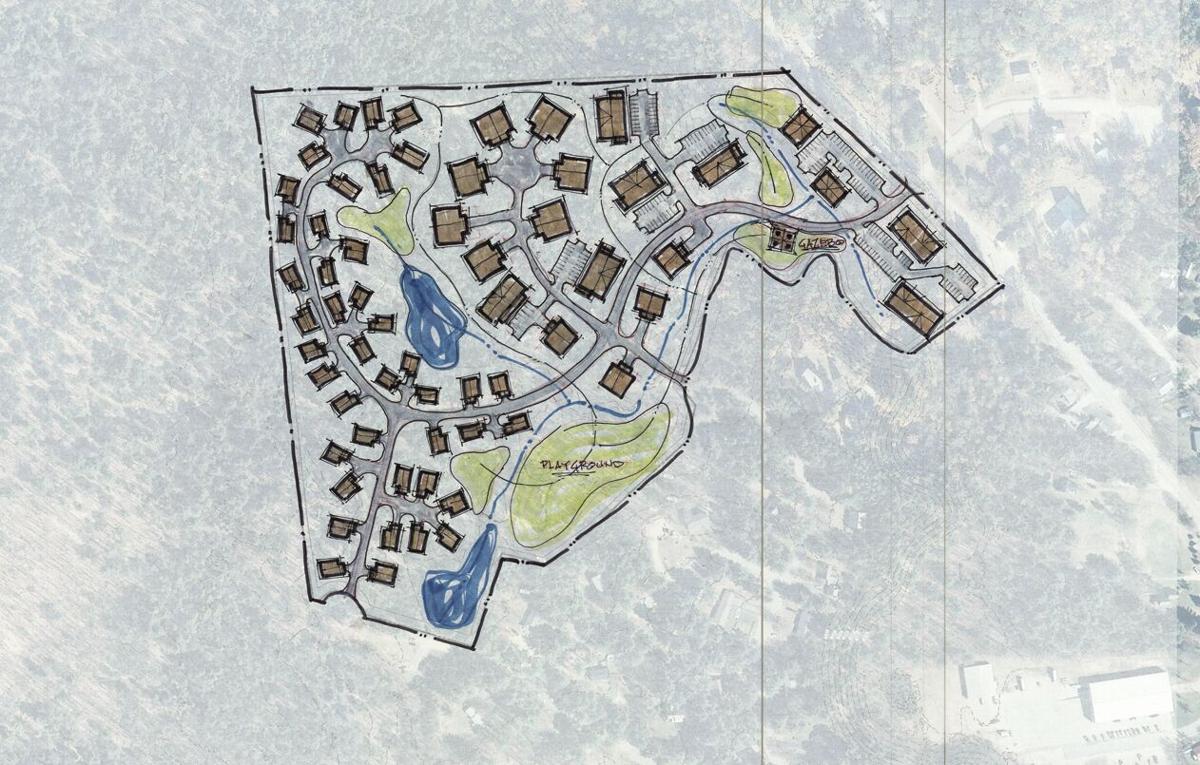 A map shows the plan created by the charrette for the development of a hypothetical affordable housing project  off the Kancamagus Highway in Conway. (COURTESY IMAGE)

A map shows the plan created by the charrette for the development of a hypothetical affordable housing project  off the Kancamagus Highway in Conway. (COURTESY IMAGE)

CONWAY — The public is invited by the Mount Washington Valley Housing Coalition to attend a Zoom webinar at 5:30 p.m. today or watch livestreamed coverage on the coalition’s Facebook page of its design reveal for a hypothetical affordable housing project at the Conway end of the Kancamagus Highway.

The design reveal follows a planning forum, or charrette, held by the coalition last month. First, a public input session took place June 15 at the North Conway Community Center attended by about 20 people. Following that, a design session was held by a team of local professionals at the Technology Village in Conway.

For tonight’s reveal, “we’re going to have a brief introduction on the charrette process and then will show a video that was filmed by Chris Proulx of Borealis Productions on the public input session and the design team’s work,” Harrison Kanzler, executive director of the MWV Housing Coalition, said Tuesday.

“It’s a half-hour documentary on the process.”

After the video is shown, Kanzler said a panel of three design team members — engineer Dan Lucchetti of HEB Engineers, past coalition president and current board member Evelyn Whelton of Bank of New Hampshire and Realtor Josh Brustin, president of Pinkham Real Estate of North Conway — will explain the project.

“We’ll then take questions as well as cover questions presented by the design team members,” said Kanzler. “Questions we don’t get to will be documented and we will get answers to them after the fact.”

One issue that Kanzler said the speakers will address concerns accessory dwelling units.

“We designed this project with the idea that new housing could be built with ADUs into some detached family units that are allowed under Conway’s zoning as a way make some of these units more affordable to first-time buyers,” said Kanzler.

He said the project also was designed to take advantage of the greater density that was passed by Conway voters last year.

Based on public input received at the June 15 listening session, the designers placed a commercial set of stores at the entrance to the site of the hypothetical build, located across from Morrell Drive, a Habitat for Humanity cluster of affordable homes off the Kancamagus.

Above those storefronts would be 20 or so rental units in the plan — which Kanzler asserted is a very possible and doable plan.

“What’s interesting about this

charrette is that Conway has done such a good job with its zoning in trying to create affordable housing that this is not pie in the sky — we utilized the density zoning that voters passed last year and the only major hiccup in this between our zoning and reality is that this would have mixed use between commercial and residential,” Kanzler said.

“The commercial aspect for the storefronts is one of only four phases we came up with, so even if we eliminated that one rental phase, this could still be done,” he added.

The rest of the subdivision would consist of town houses, condominiums and single-family structures.

Kanzler said the 39-acre lot could, under current regulations, have more than 300 units but the charrette team designed it for just under 200 units.

“Based on community feedback, we did not want a bunch of apartment buildings and condos,” Kanzler said.

“So, we went with what the community said and went for more single-family-style units, which cut us back to just shy of 200 units when we finished our design,” he said, adding, “We were able to get 50 percent o the units at an affordable rate — over 50 percent for-purchase units would be under $267,500.”

The other units at market rates would still be affordable to local professionals, he said.

According to Kanzler, U.S. Housing and Urban Development sets the affordability rates for Carroll County and defines an affordable rent for a one- bed apartment as $960 per month, including utilities; $1,152 for a two-bedroom; $1,331 for a three-bedroom; and $1,485 for four bedrooms. An affordable home would sell for under $267,500, according to HUD.

“They did some very serious number crunching at the design session. They really put everything into it, so it was very impressive to watch as we all are working to come up with solutions to this pressing problem,” said Kanzler after last month’s sessions.

The goal is to show that the project could be done by a developer, without grants, though obtaining government grants would add to a project’s viability, Kanzler noted.

The 39-acre site used for the charrette exercise has access to municipal water and sewer, and is owned by Stan Szetela of Glen and a partner. It is currently listed for $495,000 by Pinkham Real Estate.

The property is described as having potential “to be developed for multiple housing units or used for a few houses to maintain privacy yet be close to town or to build your private estate.”

Kanzler noted this week that the lack of affordable housing in Mount Washington Valley was a topic of discussion at a recent forum he attended in Manchester at a restaurant owned by developer Dick Anagnost, who is to open a new Greek restaurant with charitable gaming operations at the former Shurfine grocery store in Conway this fall.

“Everyone was talking about the valley’s housing issues,” said Kanzler.

For more information about today’s online charrette reveal, call Kanzler at (603) 452-7414 or go to mwvhc.org.