The eastern elevation of the proposed Viewpoint hotel presented in to Conway Planning Board last week shows a three -story structure. (COURTESY IMAGE)

The latest plans submitted to the planning board, dated July 30, are for a 98-room hotel totaling 59,412 square feet. (COURTESY IMAGE) 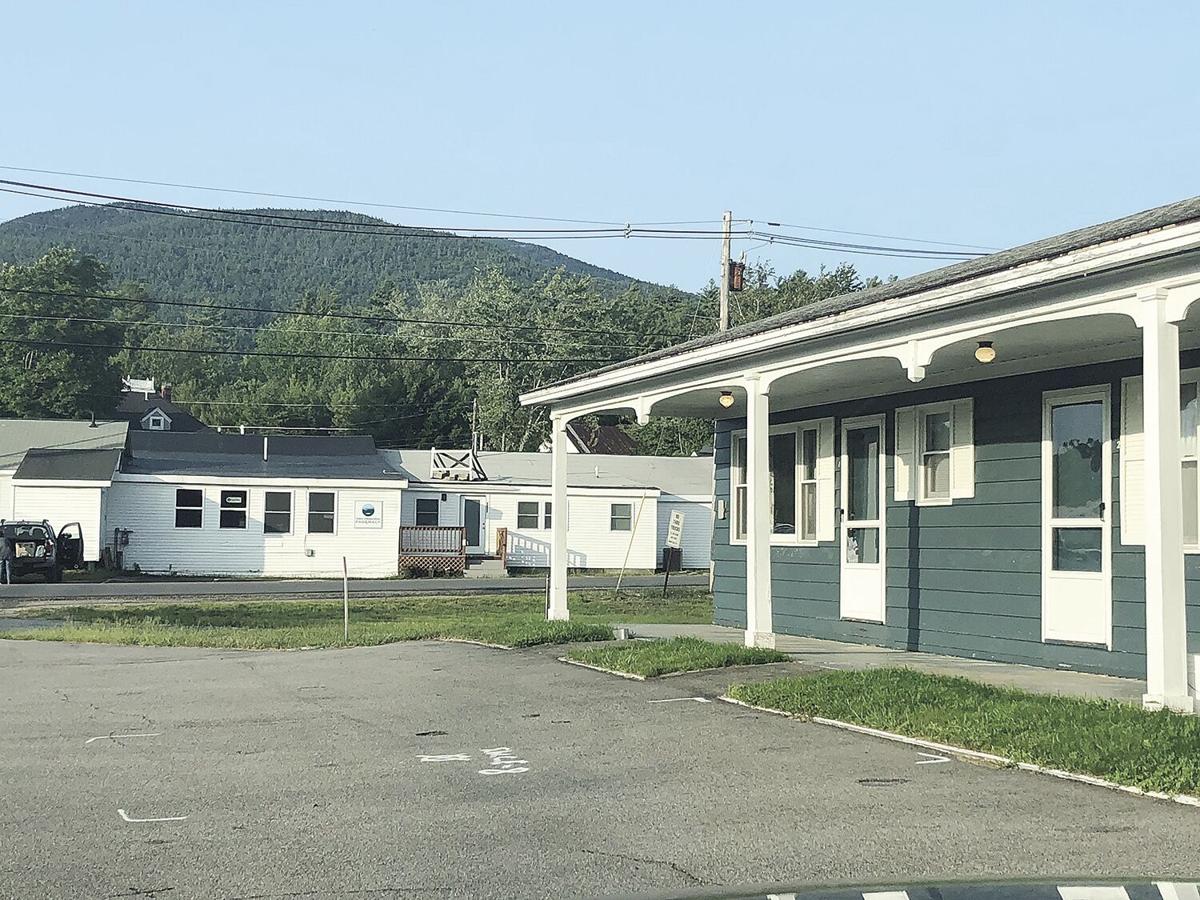 The now closed Intervale Motel (right), with Cannell's Old Fashioned Country Store and related businesses and Mount Kearsarge North in the backgorund.Developers of a proposed four-story hotel for the site are to return to the Conway Planning Board Aug. 26. (TOM EASTMAN PHOTO)

The eastern elevation of the proposed Viewpoint hotel presented in to Conway Planning Board last week shows a three -story structure. (COURTESY IMAGE)

The latest plans submitted to the planning board, dated July 30, are for a 98-room hotel totaling 59,412 square feet. (COURTESY IMAGE)

The now closed Intervale Motel (right), with Cannell's Old Fashioned Country Store and related businesses and Mount Kearsarge North in the backgorund.Developers of a proposed four-story hotel for the site are to return to the Conway Planning Board Aug. 26. (TOM EASTMAN PHOTO)

CONWAY — It probably won’t be enough to satisfy abutters, but revised plans submitted to the Conway Planning Board for its Aug. 26 meeting show Viewpoint North Conway LLC proposal for a new hotel across from the Intervale Scenic Vista has been scaled back from four stories to three.

The scope of that proposal engendered concerns from the community, with many calling for a smaller hotel.

Abutters hired a lawyer. Judging by recent letters to the editor, they also are not happy with a traffic study conducted by Vanasse Hangen Brustin, Inc. of Bedford and South Portland that concludes that “vehicular trips associated with the proposed (105-room, now 98-room) hotel would have negligible impacts to the adjacent roadway system."

The 3.66-acre parcel and Intervale Motel were sold by the John R. Cannell Revocable Trust to Viewpoint North Conway LLC, a Massachusetts group of investors headed by P.J. Patel last December for $1.4 million.

McAllister said this week after listening to input from the planning board and the public last spring, he consulted with the Viewpoint principals and they came up with the revised plan.

“The view is going to change (for the abutters)," McAllister said. "We’re talking about going from a one-story closed motel that is in dilapidated shape to a multistoried buiding that will impact the viewshed depending on where you are standing — it will be different from (how it is today), but everything we are proposing is allowed in the highway commercial zone."

The original proposal was for a structure height of 55 feet. That has been reduced by “5 to 6 feet” over the “wings of the hotel.”

The plans for a rooftop lounge and separate restaurant have been changed. Under the new proposal, the lounge will now be for guests only and the ground-floor restaurant has been eliminated.

“It will be for hotel guests only — it will not generate any more traffic,” said McAllister.

He said he has been made aware that abutters are circulating a notice, informing residents of the upcoming planning board meeting.

In a letter to the editor, Intervale resident Nancy Goyette questioned the validity of the traffic study, noting, “It is common sense that a large hotel/restaurant development will impact this area significantly."

Rob Forsman of Intervale in another letter asked developers to spare the large maple in front of the motel, but McAllister told the Sun the tree will not be left standing due to the location of the proposed winged building.

“That maple tree is not proposed to be saved," McAllister said.

McAllister said his clients will be seeking two waivers, as they were when they first came before the board: to not require a connecting drive with the abutting Starlight Lodge as it would impact a trail connection for the MWV Ski Touring and Snowshoeing Association and another for street trees due to setback limitations from Route 16.

When the project first came before the planning board last February, then board member Earl Sires IV said the projectwould not meet the spirit of the town’s master plan for that section of the northern gateway to the community.

Sires called for the planning board to spend time making sure the town’s zoning ordinances met the intent and goals of the master plan — something that has been taken up by board members as a goal for the coming year when time permits.

Some members such as Eliza Grant and selectmen’s representative Steve Porter have suggested that perhaps the town ought to be considering lower height limitations in a different commercial zone that could be proposed by the board and enacted by voters from the “railroad tracks in North Conway” on Route 16 just north of White Mountain Oil & Propane to the Intervale railroad tracks just north of the state’s Scenic Vista.

Porter has said that the proposed Viewpoint Hotel would fit in well on the commercially zoned Route 16 strip, but that at four stories it would be too large for the Intervale area.

The Conway Planning Board meets at 7 p.m. Aug. 26 at Town Hall in Conway Village.

"Sires called for the planning board to spend time making sure the town’s zoning ordinances met the intent and goals of the master plan — something that has been taken up by board members as a goal for the coming year when time permits."

Maybe the Planning Board needs to put a moratorium into effect that would suspend all new development until they publicly present a completed/revised Master Plan for everyone to see and vote on.

If the MWV is currently struggling to find people to fill service industry jobs, just where do they think these people will come from to operate a new Hotel? Also, has there been any kind of study that shows there is a demand for more Hotel space? Or are we just competing for the same dollars from existing Hotels?

Conway residents are sure engaging in every form of 'not in my backyard', aka NIMBYism. It is allowable under building plans so avoid the costly court actions and let it go.

I think that would require people to be saying ‘not in my backyard’ to a hotel, which according to the article (reading is hard!) neighbors are not saying. Seems like they are asking for something scaled back. Although this says it’s 3 floors so … what are we calling that fourth level with a roof and a door…?