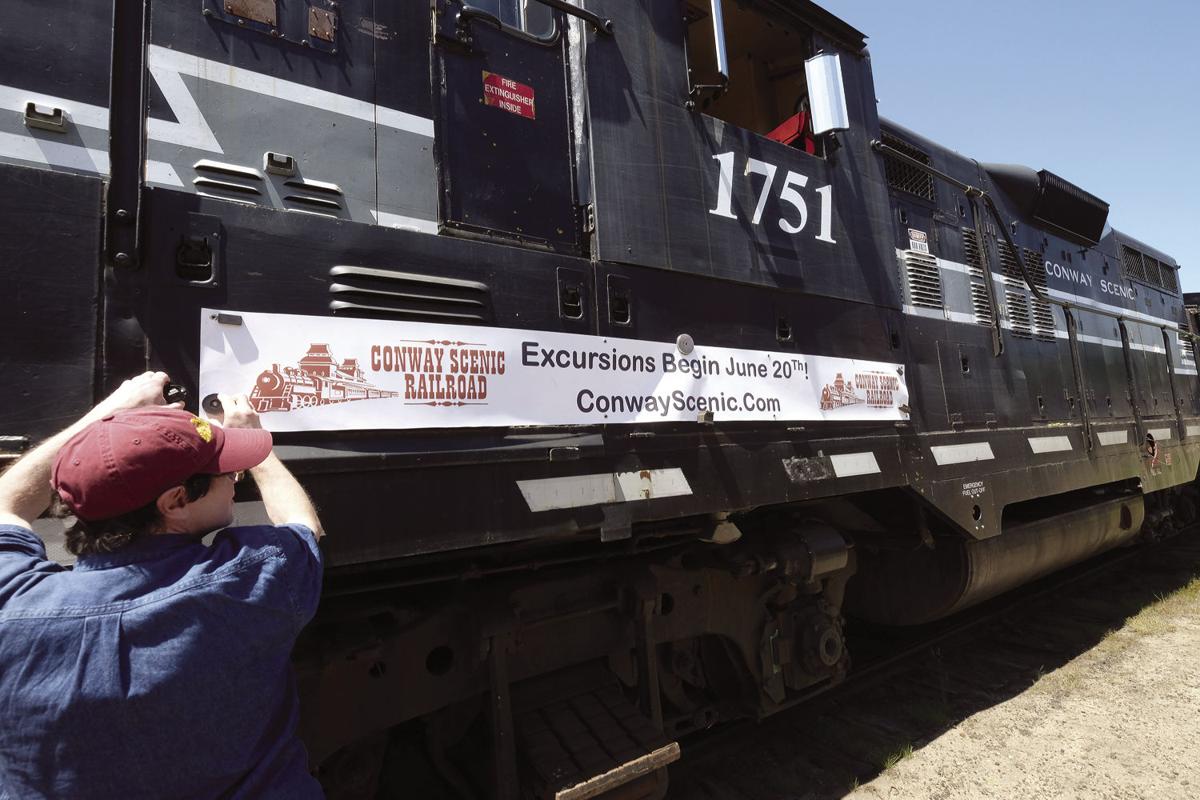 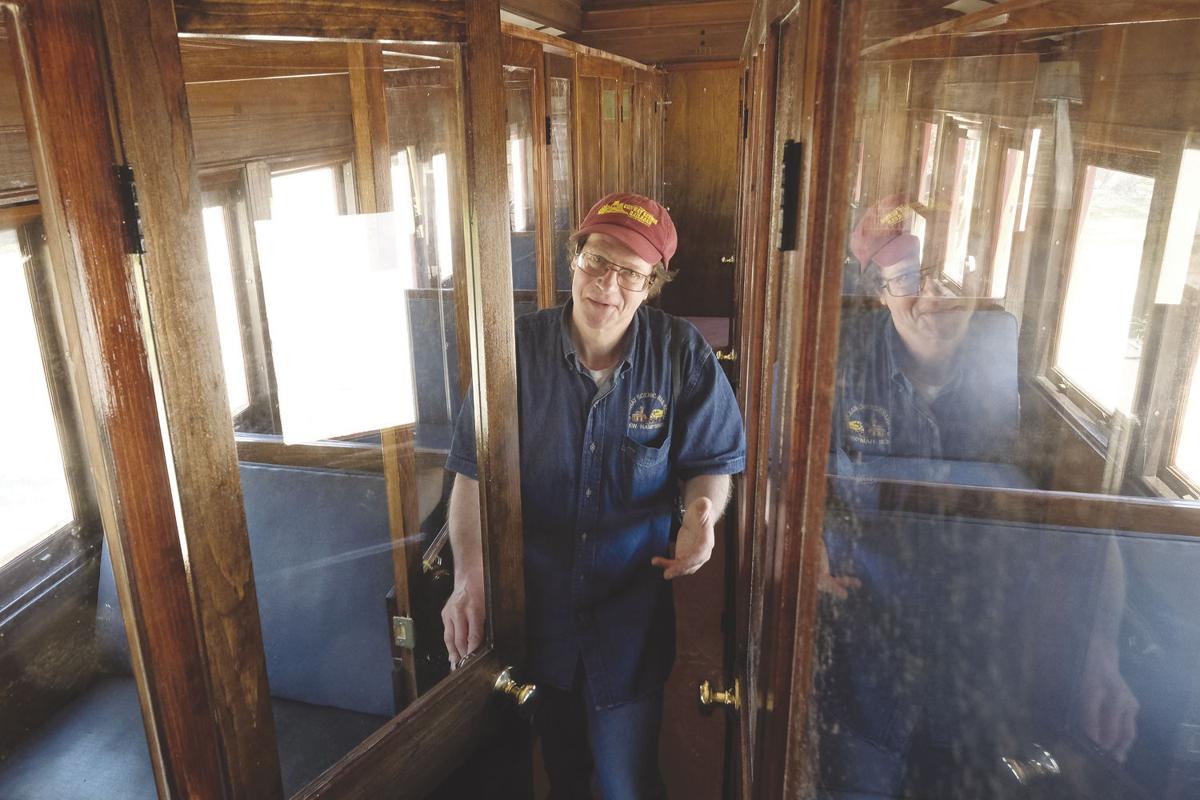 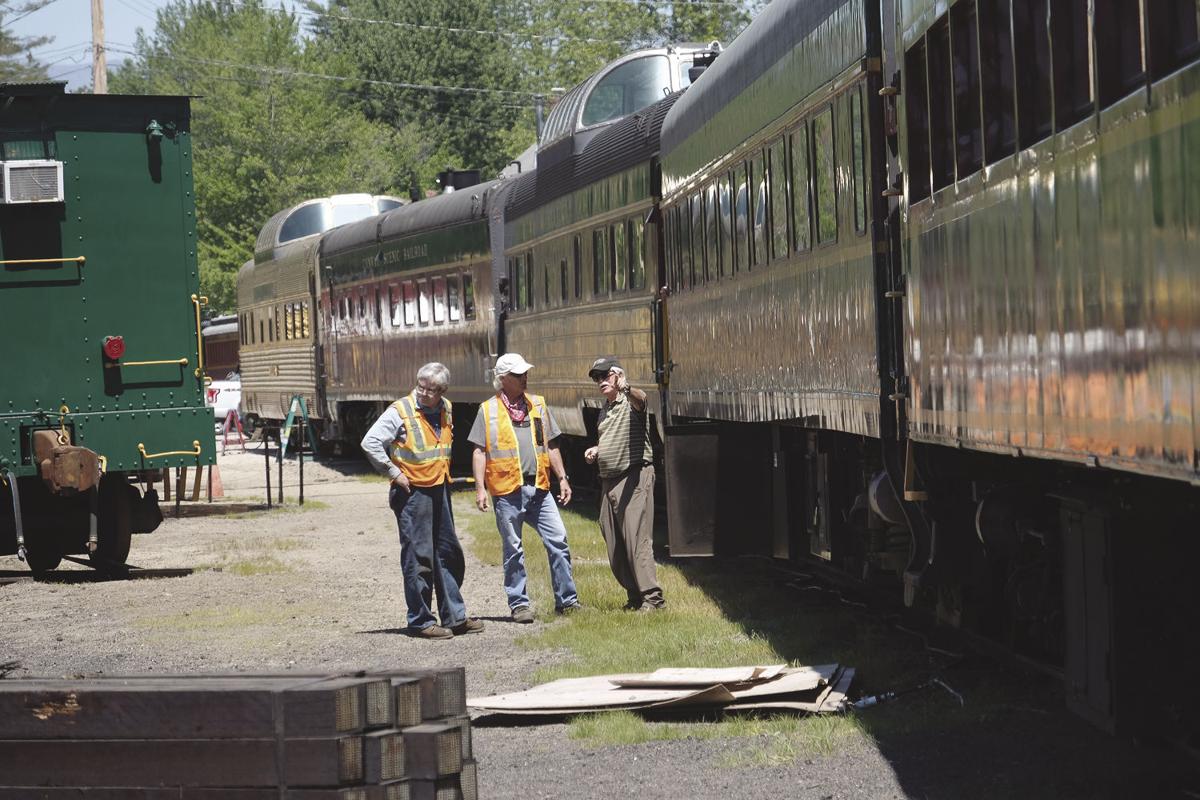 From left: Conway Scenic Railroad engineers Wayne Duffett and Tom Carverronie with Train Master and Road Foreman of Engineering Mike Lacey checks out the some of the coach cars for the Mountaineer on Tuesday while crews prepare for opening day.  Operations begin Saturday. (JAMIE GEMMITI PHOTO)

From left: Conway Scenic Railroad engineers Wayne Duffett and Tom Carverronie with Train Master and Road Foreman of Engineering Mike Lacey checks out the some of the coach cars for the Mountaineer on Tuesday while crews prepare for opening day.  Operations begin Saturday. (JAMIE GEMMITI PHOTO)

CONWAY — After a delayed start to its season due to the COVID-19 pandemic, the Conway Scenic Railroad will get its excursion trains rolling again Saturday, just in time for Father's Day weekend.

It will incorporate new social distancing measures including old-fashioned train compartments for one special train that customers are bound to like a lot, say railroad owner/manager David Swirk and marketing/events manager Brian Solomon.

“We’re looking forward to seeing everyone again,” said Swirk, who with wife Rhonda purchased the 1974-founded tourist railroad in 2018 from Russ and Dot Seybold.

Gov. Chris Sununu last week lifted the restrictions on tourist railroads such as the CSRR, allowing them to open June 15.

But Swirk and Solomon said they opted to delay their start until this Saturday to give time for training (no pun intended) railroad employees on new prodcedures under the new COVID-19 social distancing guidelines.

In terms of losing business this spring, Swirk said, “There’s no question there was a financial impact.

"Just like any business that was ordered to close, we lost months of income," he said. "But on the other side of it, we had a group of very talented people come onto the property (I had to get special approval from the state for that), and we got a lot of maintenance done in that time."

Another upside, he said, is "it’s also making the railroad a better place for the future. It cost us some money, but at the end of the day I think we are better off for it.”

Swirk said the CSRR will start out with fewer excursions until they can gauge how quickly the public will return to taking runs.

“We can add runs (as demand warrants),” said Swirk.

Cars will be run at about 30 percent capacity to allow for social distancing between groups of at least 6 feet, with assigned seating, said Swirk and Solomon.

Groups and families who arrive together may be seated together but the 6-foot social distancing restrictions will otherwise be in effect, they said.

Face masks will be required of all employees and also are required for passengers when boarding and disembarking as well as when they get up to use the restroom during their train ride.

Passengers will not be allowed to walk the train other than using the restroom.

In addition, one car on the Valley Train has been retrofitted for those with underlying conditions and special health concerns regarding the COVID-19 virus.

Master carpenter George Small has spent the spring working on the car by adding wooden compartments, similar to what one might find on The Orient Express, with plexiglass partitions that allow passengers in their compartments to look outside through windows that open to bring in the fresh air.

“Most of the compartments are able to hold up to four passengers of a group. There will be no mix-and-matching,” said Solomon.

They both said the biggest change under the new COVID-19 era is that boarding times are key for passengers to allow railroad crews to seat passengers in accordance with the social distancing guidelines.

The boarding is more complex because of the new assigned seating now in effect.

"We encourage people to book ahead, but we can take people up to about half an hour before departing," said Solomon.

Another new change is rechristening the formerly called Notch Train as “The Mountaineer,” its traditional name for the joint Boston & Maine's Maine Central service through Crawford Notch.

A rededication of the Mountaineer under its new (old) name is set for June 27, with a special run at noon through Crawford Notch (boarding time, 11:30 a.m.) for a five-hour up-and-back trip, including a half-hour ribbon-cutting ceremony at the start.

The Mountaineer in summer will run Tuesdays and Saturdays at noon with an 11:30 a.m. boarding time for four-hour runs departing North Conway.

The layover time at Crawford Depot has been shortened to 35 minutes, Solomon said.

“We will add Mountaineer runs on Thursdays after that as business grows and then more after that,” said Swirk.

Because the Mountaineer cars are physically longer, Swirk says although they will not be equipped with a special compartmentalized car, they will be able to "reliably offer adequate social distancing."

In addition, he said, the CSRR is making dividers — but not compartments — for the its Mountaineer dining cars, the domed Rhonda Lee and the Hattie Evans, and the Valley Train dining car, the Chocorua (dining is tentatively slated to start on all trains June 27).

“On the dining cars, we are making these nice glass-and-wood dividers, and as long as we’ve got this COVID thing to deal with, we’re using an industrial strength shower curtain for the dining cars," said Swirk.

"Yeah, it’s not the greatest thing, but it allows our guests to be protected in a reasonable fashion,” said Swirk, saying the railroad has based its improvements on those used by the restaurant industry during these pandemic times.

In other new developments, the Conway Scenic got conditional approval from the Conway Planning Board on June 11 for a new 4,840-square-foot storage structure off West Main Street in Conway Village at the railroad’s southern terminus that will not only be used to house historic railroad equipment during the winter, but will also be used to store equipment for special events that the tourist railroad plans to bring to that end of town.

The plan is to build it this summer, according to Swirk and project consultant Shawn Bergeron of Bergeron Technical Services of Conway, who accompanied Swirk at last Thursday’s planning board, held at the Marshall Gym at the Conway Recreation Department inside Kennett Middle School.

Two trains can fit inside the approved new building, but Swirk imagines it could also be used for special events such as wedding rehearsals or themed parties or corporate events, once those restart.

“We will be stopping at various hotel properties along the railroad where we can put together the hotel room, the train thing as one ticket. The new building will look old, so it will look like it matches the Freight House next to it, but across the tracks. There will be very little parking required as again, all of the participants will arrive by train,” said Swirk.