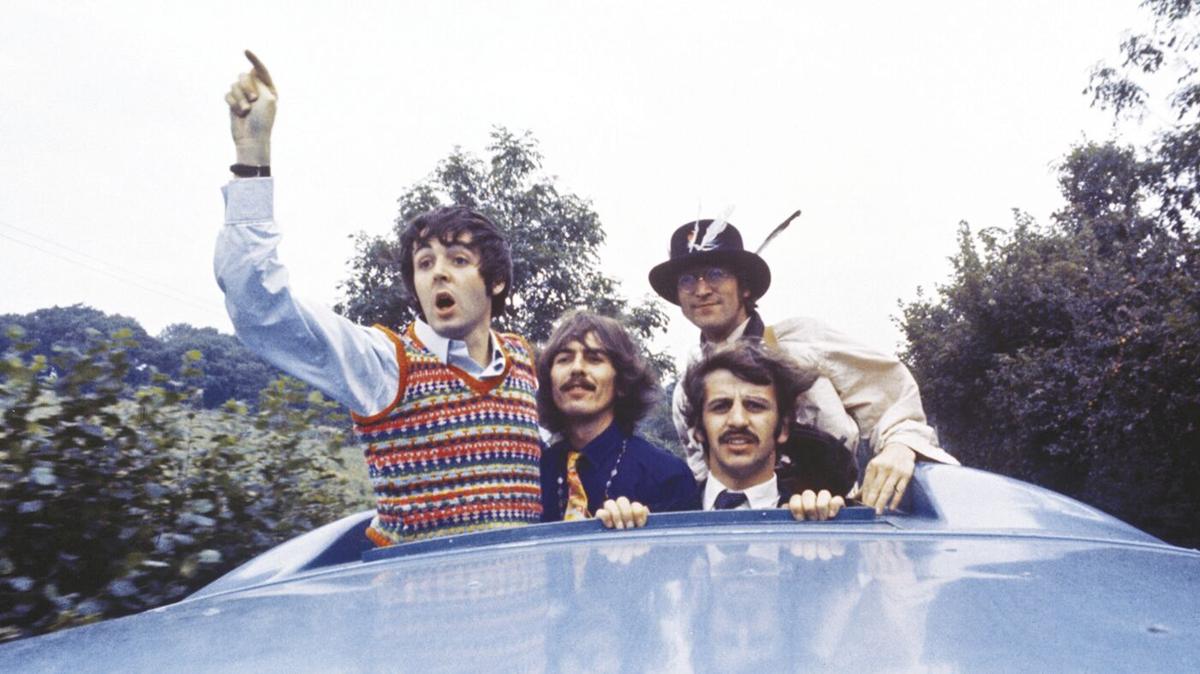 The Beatles in the TV special "Magical Mystery Tour," the only film project they wrote and directed. (COURTESY of APPLE CORP) 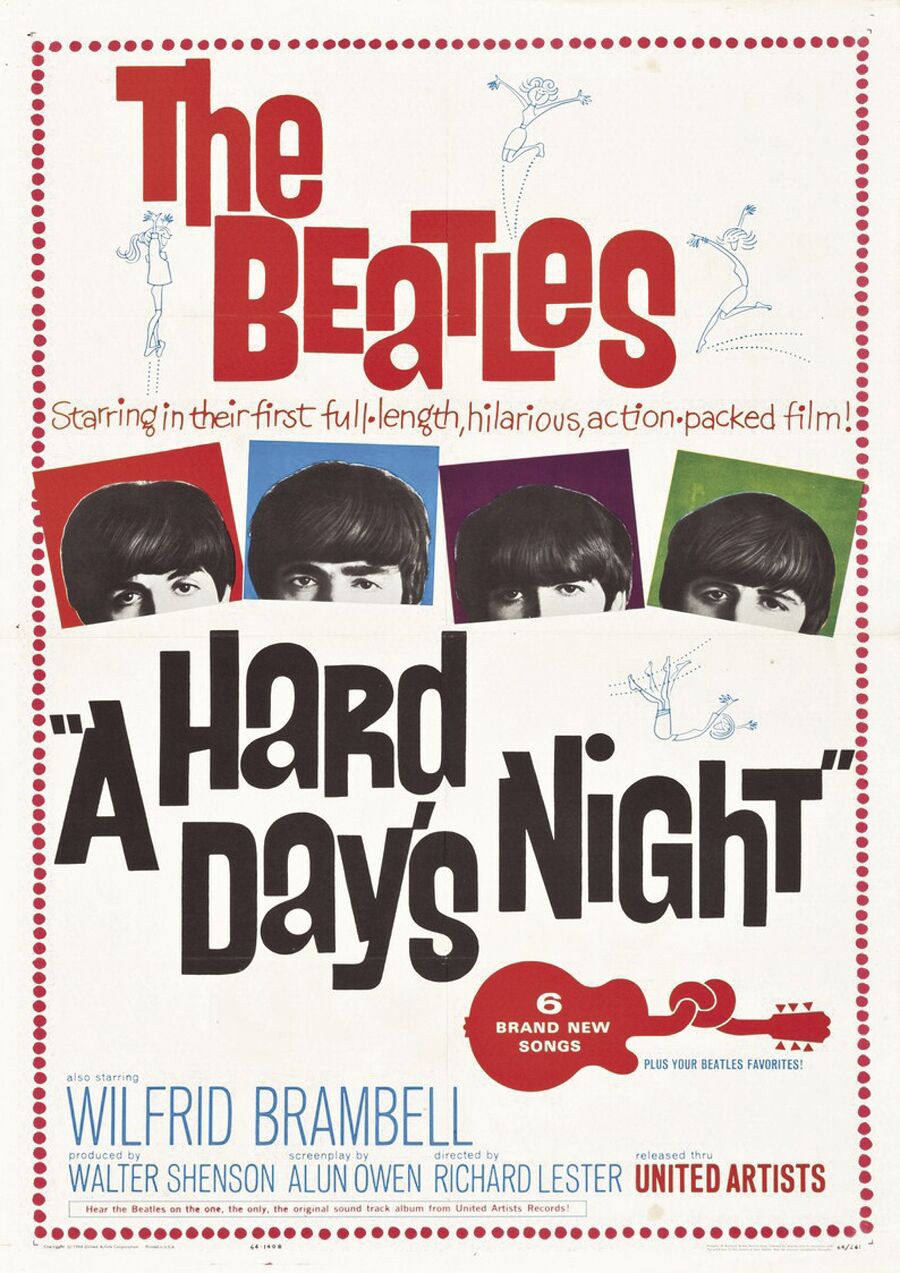 The Bealtes made their film debut in "A Hard Day's Night" in 1964. (COURTESY OF APPLE CORP) 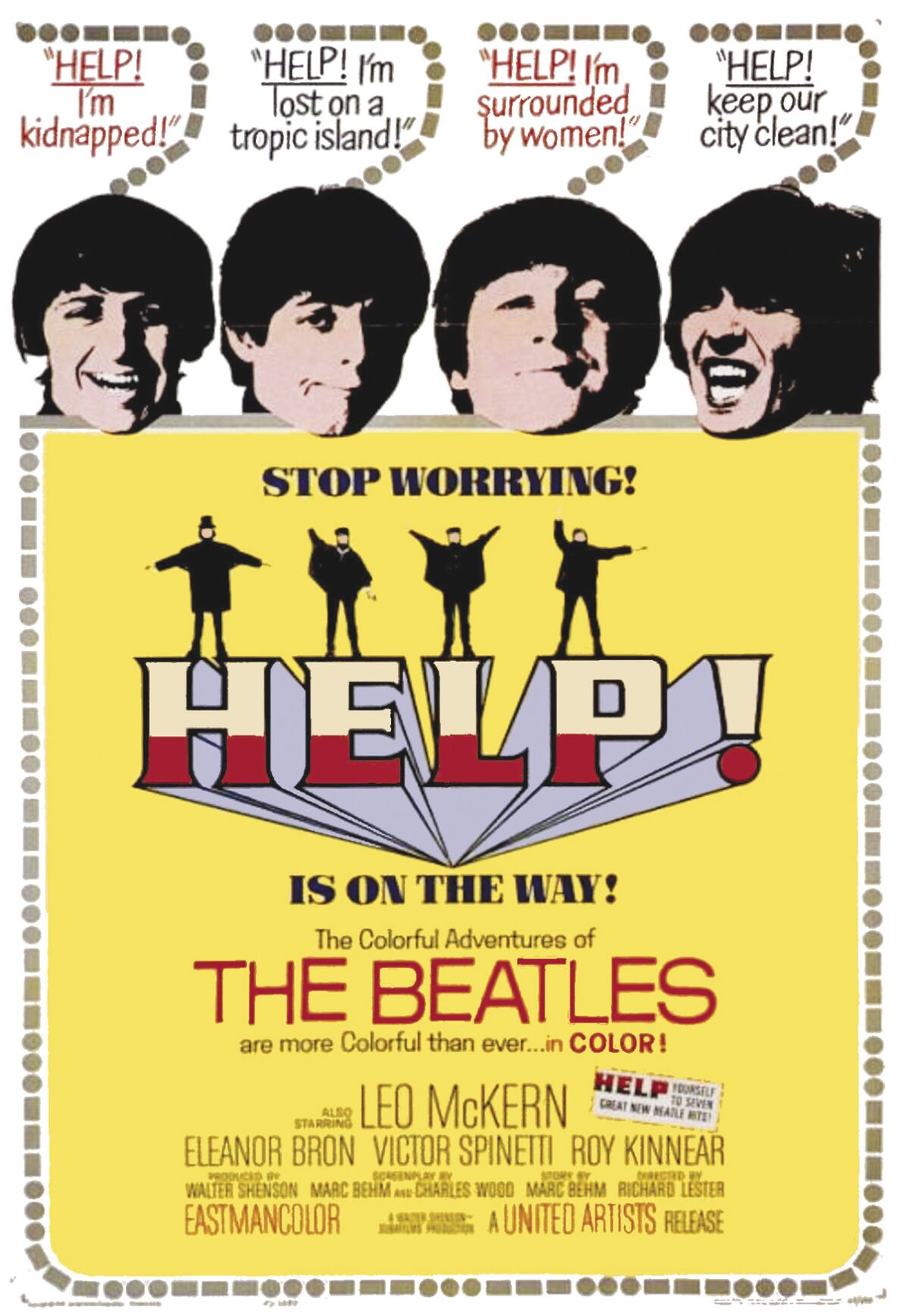 "Help!" was The Beatles' second film. (COURTESY OF APPLE CORP) 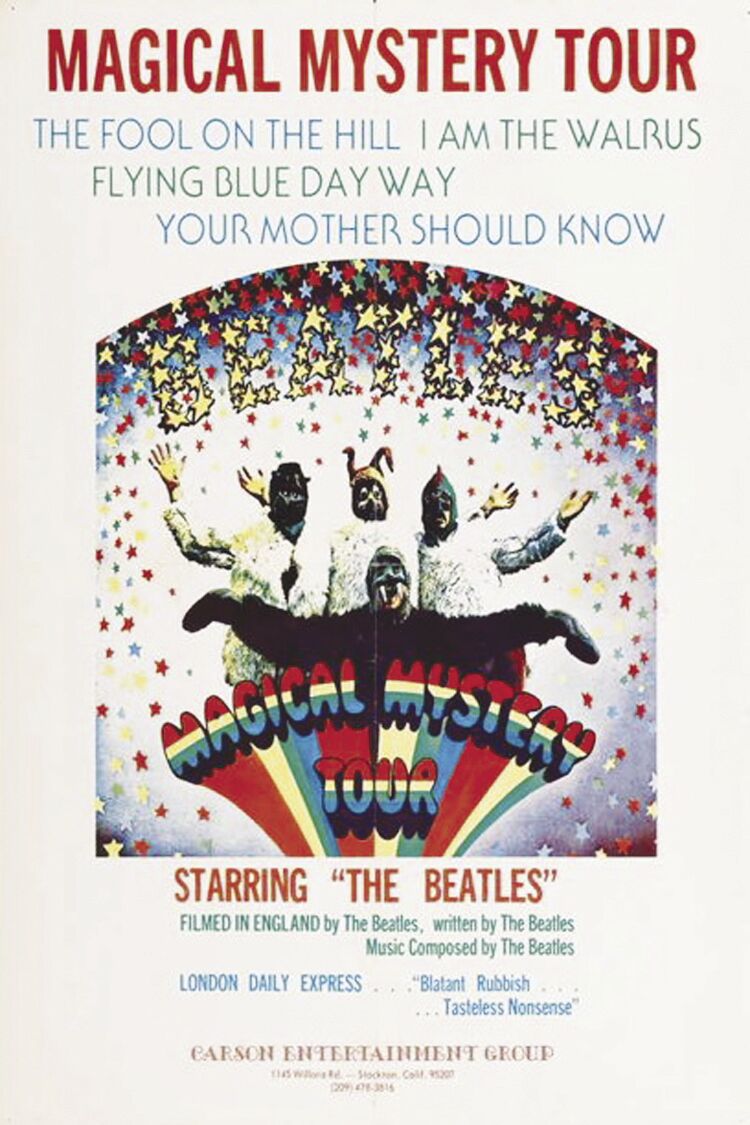 The 1967 TV special "Magical Mystery Tour" was the only project written and directed by The Beatles. (COURTESY OF APPLE CORP) 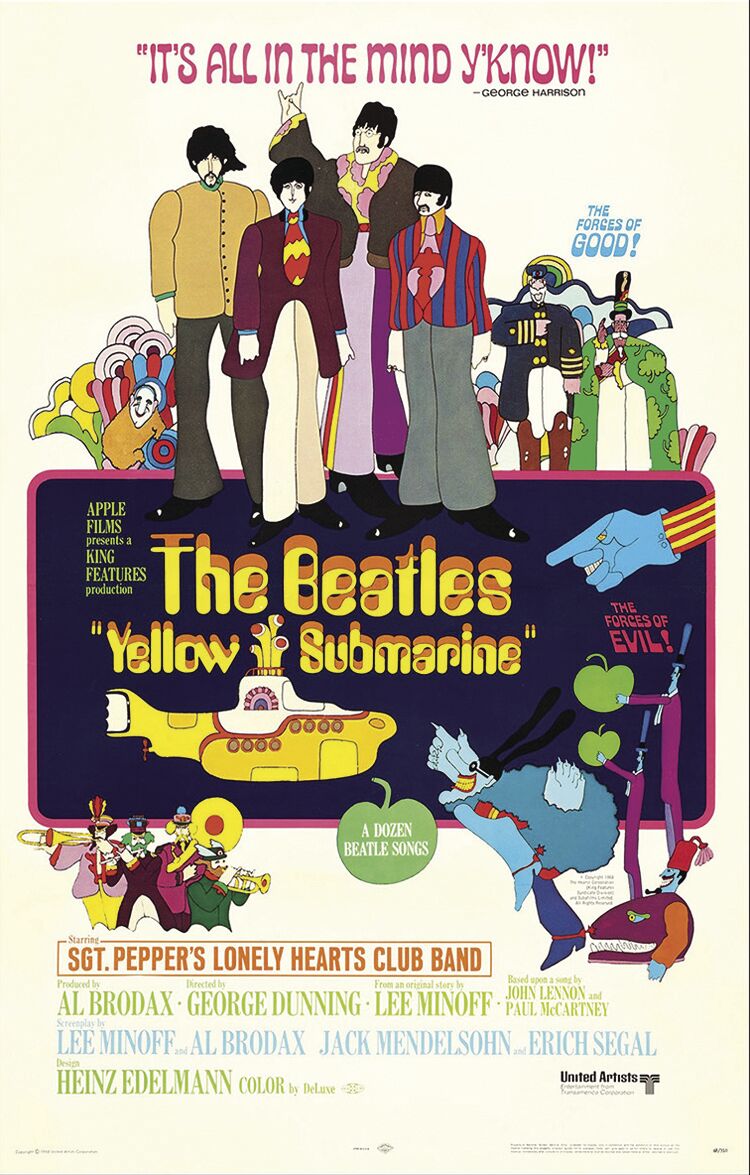 The animated "Yellow Submarine" was released in 1968. (COURTESY OF APPLE CORP) 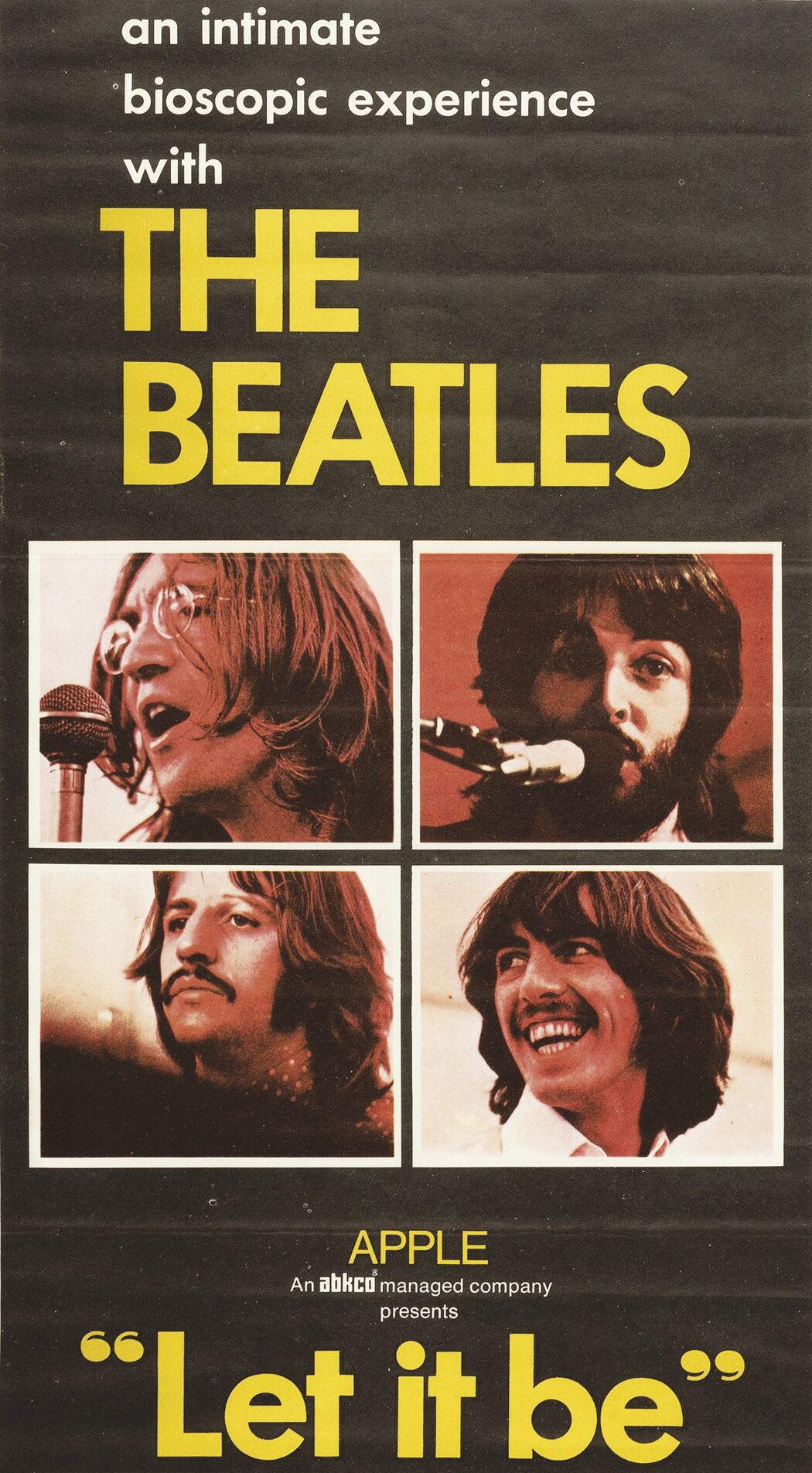 The documentary "Let it Be" chronicled the rehearsal and recording process for the album of the same name. Peter Jackson's "The Beatles: Get Back" expands this film into a three-part, six-hour docu-series. (COURTESY OF APPLE CORP)

“The Beatles: Get Back,” a three-part documentary series directed by Peter Jackson, will debut on Disney+ on Nov. 25-27. The series is culled from 55 hours of footage and 140 hours of audio from the original “Let It Be” documentary project that was released in 1970.

In honor of the release, it seems like a good time to revisit films The Beatles starred in.

A mob of screaming girls chase after four young Liverpudlian lads in the opening shots of “A Hard Day’s Night.” It remains one of the most iconic images of movie history, but this film is much more than its opening.

Director Richard Lester crafted a vehicle for The Beatles’ music and personality that reigned in John Lennon, Paul McCartney, George Harrison and Ringo Starr, but didn’t restrict them. We see a fictionalized, manufactured version of The Beatles, with actors playing Paul’s mischievous grandfather (Wilfrid Brambell) and the band’s exasperated handlers (Norman Rossington and John Junkin), but their loopy sense of humor comes through as being all their own.

Screenwriter Alun Owen spent time with the Fab Four and distilled their essence while also positioning them as a Marx Brothers-esque unit. They all toss out one-liners, but John gets the majority making him the rebellious Groucho Marx force of the film. Ringo becomes Harpo Marx in a sequence where he roams the streets snapping shots with his camera. The segment is a throwback to silent film slapstick.

With its mix of documentary-style footage and narrative filmmaking, the film has a French or Czech New Wave feel. Its beautiful, crisp black-and-white aesthetics revolutionized how a band could be shot. Lester utilizes close ups, low and high angles, and even allows for a lens flare. These “imperfections” are what make this movie unique.

While its predecessor was shot quickly and on a low budget, returning director Lester chose a different approach for his second Beatles’ film. The success of “A Hard Day’s Night” guaranteed Lester a bigger budget, and he took full advantage of it.

“Help!” is a madcap parody of jet-setting spy movies. The plot has The Beatles on the run from a religious cult and a pair of mad scientists who want a sacred ring that refuses to come off Ringo’s finger.

Lester uses a bright color palette, clever transitional titles, as well as angles and perspectives that are even more radical than those in “A Hard Day’s Night.” The appearance of a dreamlike intermission feels like a precursor to Monty Python’s absurdist anarchy. It is not surprising that George would go on to work closely with the Monty Python troupe in his post-Beatles years.

The musical set pieces, especially “Ticket to Ride,” with the Fab Four skiing in the Alps, and “I Need You,” with the band performing surrounded by tanks and British military, are extraordinary. There are some equally fabulous comic set pieces, most memorably a sequence in which a shrunken Paul takes an orange soda bath in an ashtray.

This isn’t a movie, but rather a TV special that debuted on the BBC in December 1967 to dismal ratings and reviews.

The project was the first and only film production written and directed by The Beatles. It leans further into the surreal comedy bits that were hinted at in “Help!” but with even less plot and focus. Things are tied together by the band driving around in a painted tour bus.

Clocking in at 55 minutes, “Magical Mystery Tour” is essentially a series of music videos strung together. It is likely that even if you haven’t seen the full special you’ve seen some of the musical segments, including “I Am the Walrus,” which does include someone dressed as a walrus and John as the “eggman.”

Most of the connecting material doesn’t work nearly as well as “A Hard Day’s Night” and “Help!” but the music segments are well-presented. The beautifully shot “The Fool on the Hill” portion is a particular standout.

After the critical and public lambasting of “Magical Mystery Tour TV,” the group lost interest in films. As they were still under contract, the idea of an animated Beatles film came to life.

The Beatles wanted little to do with the project — even their speaking voices were done by impersonators. In the end, they were thrilled with the final product and made a live-action cameo. “Yellow Submarine” is an audacious piece of pop-art animation that captures the essence of the psychedelic free-love era.

While it is clearly from a specific moment in time, “Yellow Submarine” has a timelessness quality that stems from the music, but also from its story, which plays like a fairy tale filtered through Lewis Carroll’s looking glass. The Beatles travel to Pepperland to do battle with the authoritarian Blue Meanies who hate music and happiness.

It is all an excuse to preach the message that “All You Need Is Love,” but it is done with an endearing childlike innocence spiked with cheeky Beatle-isms like, “Must be very tiring being time … it's a 24-hour day.”

Unlike “Magical Mystery Tour,” the film’s surreal visuals don’t feel dated. The animation by director Heinz Edelmann is so artfully rendered and perfectly meshed with the songs that the music and visuals almost seem to be feeding off of each other, especially and most brilliantly on “Eleanor Rigby.”

The Beatles needed one more film to honor their contract with United Artists, so it was decided to film their rehearsal and recording process for what would become their final album. With a short 80-minute length, “Let It Be” is a frustrating brief window of a tumultuous time for the band. “Get Back” will hopefully give us a more complete picture of this time period.

The legend around this era was that the band was in the midst of infighting and some of that comes through in “Let it Be” with George at one point pleading to Paul: “I'll play whatever you want me to play or I won't play at all if you don't want me to play, you know. Whatever it is that'll please you, I'll do it.”

In a press statement about “Get Back,” Jackson said that he was “relieved to discover the reality is very different to the myth. ... Sure, there's moments of drama but none of the discord this project has long been associated with.”

“Let It Be” concludes with the infamous rooftop concert, the band’s first live performance in three years, and captures the Beatles magic. Director Michael Lindsay-Hogg goes down to the streets and inter-cuts hilarious reactions from the unsuspecting bystanders.

The last official release of “Let It Be” was in the early ’80s on VHS and laserdisc, but bootleg copies have been floating around ever since.

With the long-awaited sequel "Bill and Ted Face the Music" set to be released Sept. 1, I've been discussing fictional bands from movies and TV…