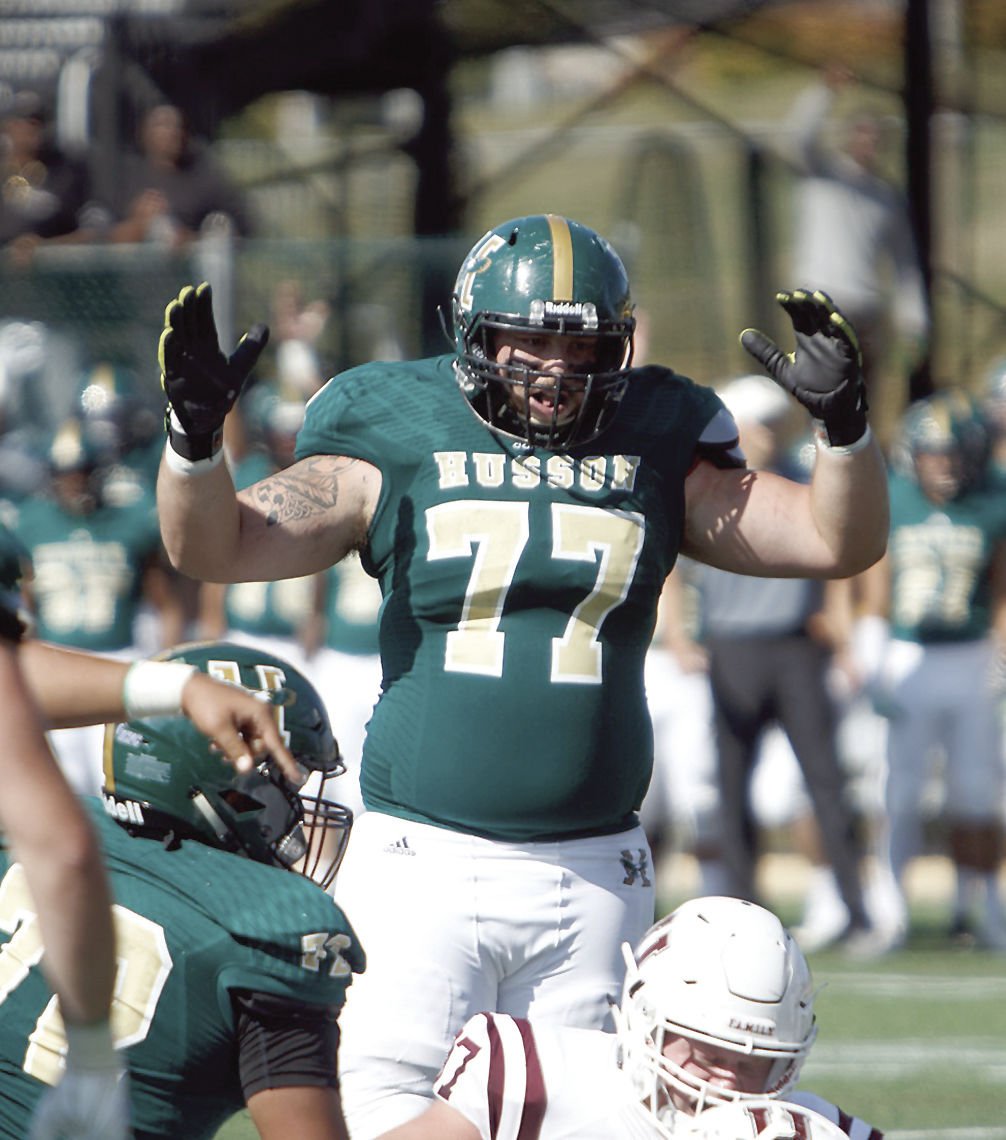 Jacob Cameron has made an immediate impact on the offensive line for Husson College. He's been a starter his first two years as a Husson Eagle, earning First-Team, All-Conference honors. (COURTESY PHOTO) 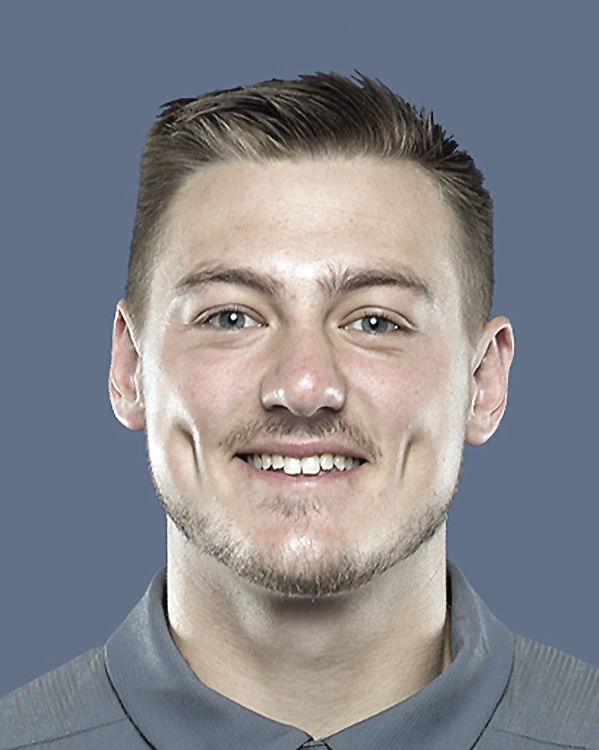 Cory Brandon is now a resident of Bartlett. (COURTESY PHOTO) 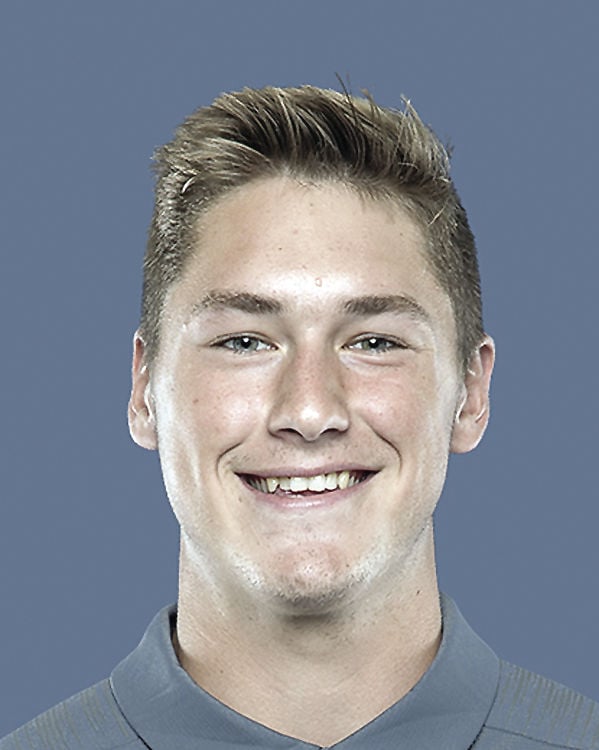 Jacob Cameron has made an immediate impact on the offensive line for Husson College. He's been a starter his first two years as a Husson Eagle, earning First-Team, All-Conference honors. (COURTESY PHOTO)

Cory Brandon is now a resident of Bartlett. (COURTESY PHOTO)

Three football players with Mount Washington Valley connections all played for the successful Husson College (8-3, with an NCAA tournament appearance) Eagles in Bangor, Maine, this past fall: Patrick Cullen, Kennett High Class of 2017, a tight end from Conway; Jacob Cameron, KHS ’15, an All-Conference offensive tackle from North Conway; and quarterback Cory Brandon, now a resident of Bartlett and a January hire for the Conway Police Department.

For Cullen, a 6’4,” 205-pound tight end, playing time was limited in 2018. Cullen found himself playing behind an All-Conference first-teamer and shifting from his first-year position as a wideout.According to teammate Cameron, Cullen could find a spot and considerable playing time returning to wide receiver next fall, as the Husson Eagles lose some veterans from that position.

For Cameron, at 6’2” and 315 pounds, it was another outstanding season on the offensive line for Husson. Cameron played every snap at left tackle for an offense that rushed for over 220 yards a game and allowed only four sacks in Eastern Collegiate Football Conference games. Cameron was selected by his coaches as offensive lineman of the week three times last fall. Only a sophomore, Cameron earned his second consecutive All-Conference first team selection. In a phone interview, Cameron professed, “I felt in the greatest shape of my life this season.”

For Brandon, his route to the valley has come later than Cullen or Cameron, but he will be in full presence come this month when he is sworn in to action as a Conway Police Department officer. The Criminal Justice major starred at Pembroke (Mass.) High School before taking a red-shirt season at NAIA Briarcliff University. After a year learning the playbook and the ropes up in Bangor, Brandon took over the quarterback spot and made it his own, becoming the only Husson quarterback to earn All-Conference honors three years in a row.

Brandon’s achievements fill up the stat book. In both 2016 and 2018, he threw for 27 touchdowns and over 2,300 yards. From sophomore to junior to senior seasons his pass completion percentage continually climbed, from 59.2 percent to 62.5 percent to 65.5 percent.

Cameron calls the 6’1,” 195-pound play caller, “a great teammate, a great leader with a vocal, positive attitude which always kept our heads in the game.”

Husson completed its ECFC regular season undefeated at 6-0. The Eagles’ season ended with a 38-14 loss at Rensselaer (N.Y.) Polytechnic Institute on Nov. 17 in the first round of the NCAA Division III tournament, among the top 32 teams in Division III.

ECFC honors will evade Cameron in his junior season, as the Eagles move up to the Commonwealth Coast Conference, where the talented lineman expects a more competitive schedule. Traditional rival Western New England University won the CCC and the accompanying NCAA automatic conference bid in 2018. Cameron remarked, “The WNE game will be bigger than ever,” as the game results could well determine the CCC champion and NCAA bid in 2019.

Cameron looks forward to the challenge, noting that his teammates have the right attitude, and after only a brief interlude following the RPI loss, the players are all back hard at work in the weight room already.

As a final note, Cameron praised the football community of the valley, noting how special it was to see old teammates, Kennett alums and valley football fans who support not only himself but all the athletes now continuing their football careers in college.

While the trek up to Husson is over three hours, the CCC schedule may bring the Husson Eagles a little closer to their former Kennett Eagles’ home in 2019.

Watch for further stories highlighting Kennett High and Fryeburg Academy collegians who competed in fall athletics. If you know of an athlete who should be included, please contact John Skelton at shinjo0227@yahoo.com, and/or Lloyd Jones at lloyd@conwaydailysun.com.