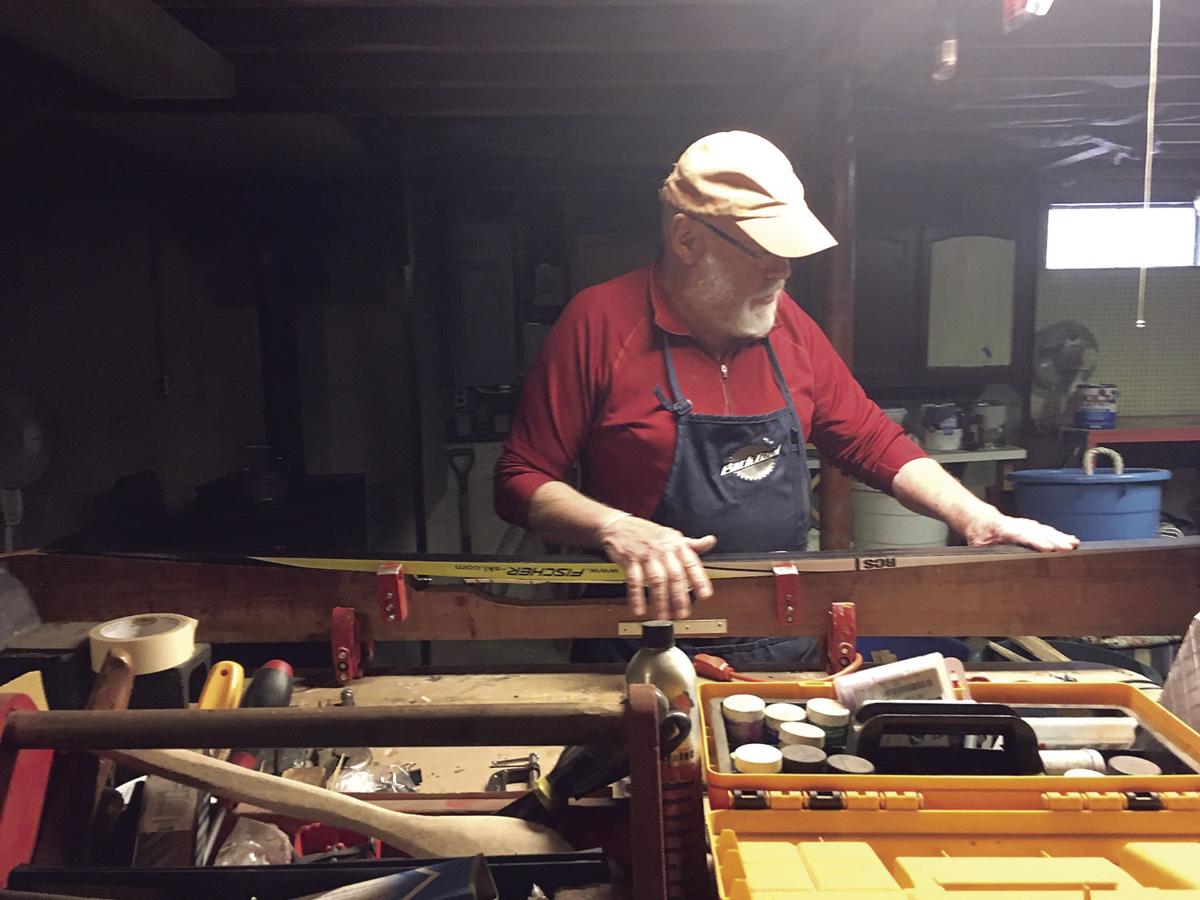 Peter Minnich sets up the homemade wooden ski jig to get ready to wax some skis. (SALLY MCMURDO PHOTO) 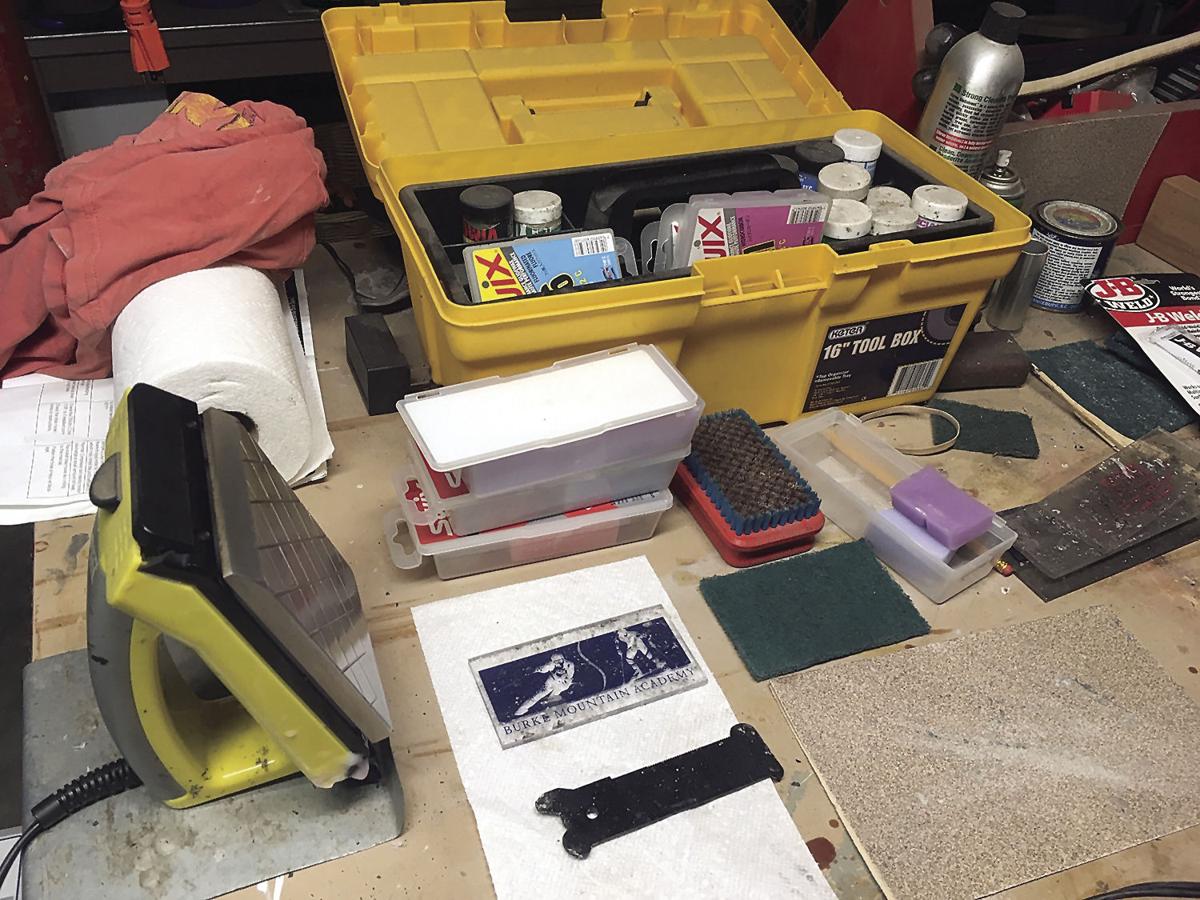 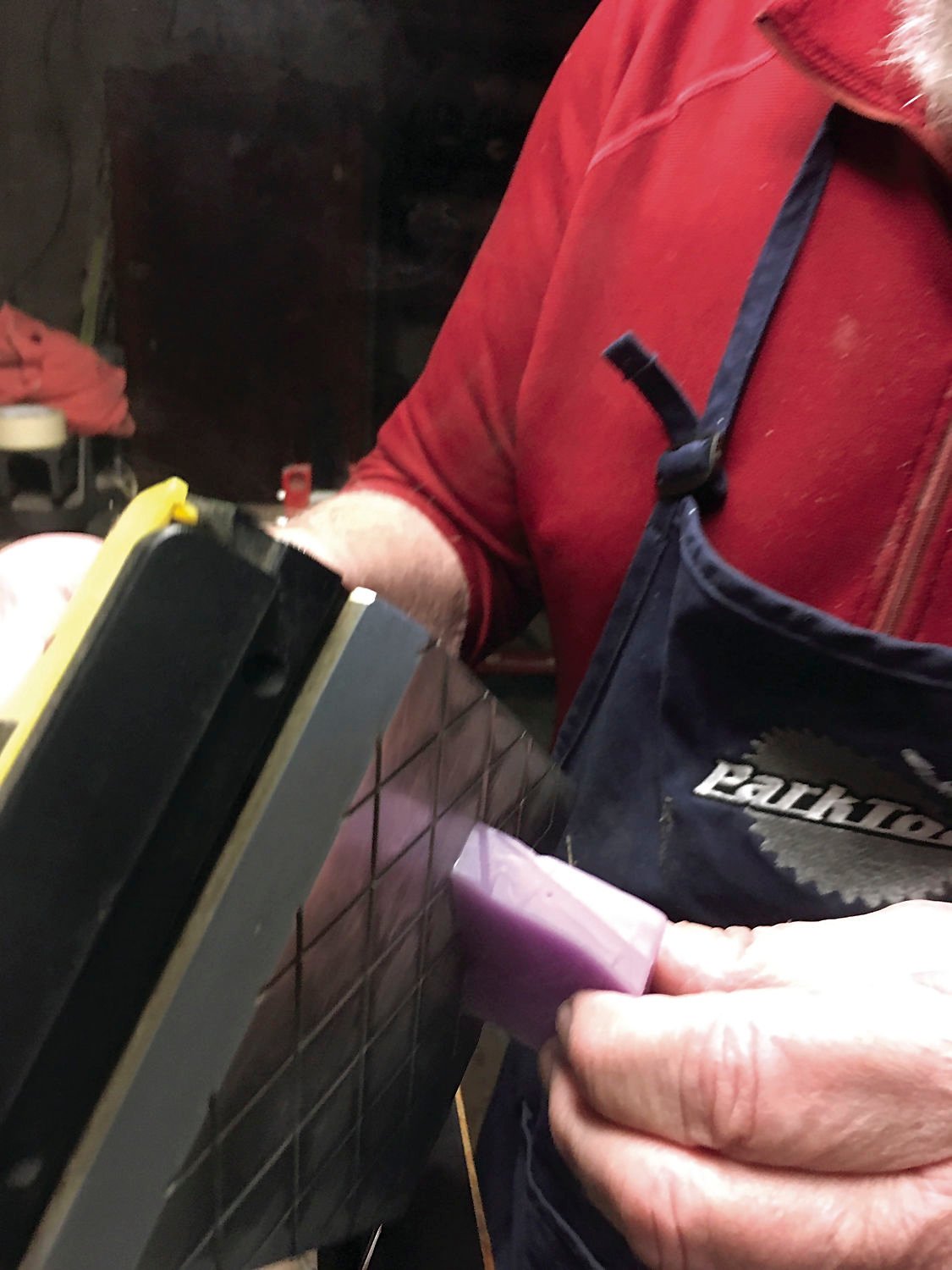 Hold the wax against the hot iron to melt it and drip wax onto the ski. (SALLY MCMURDO PHOTO) 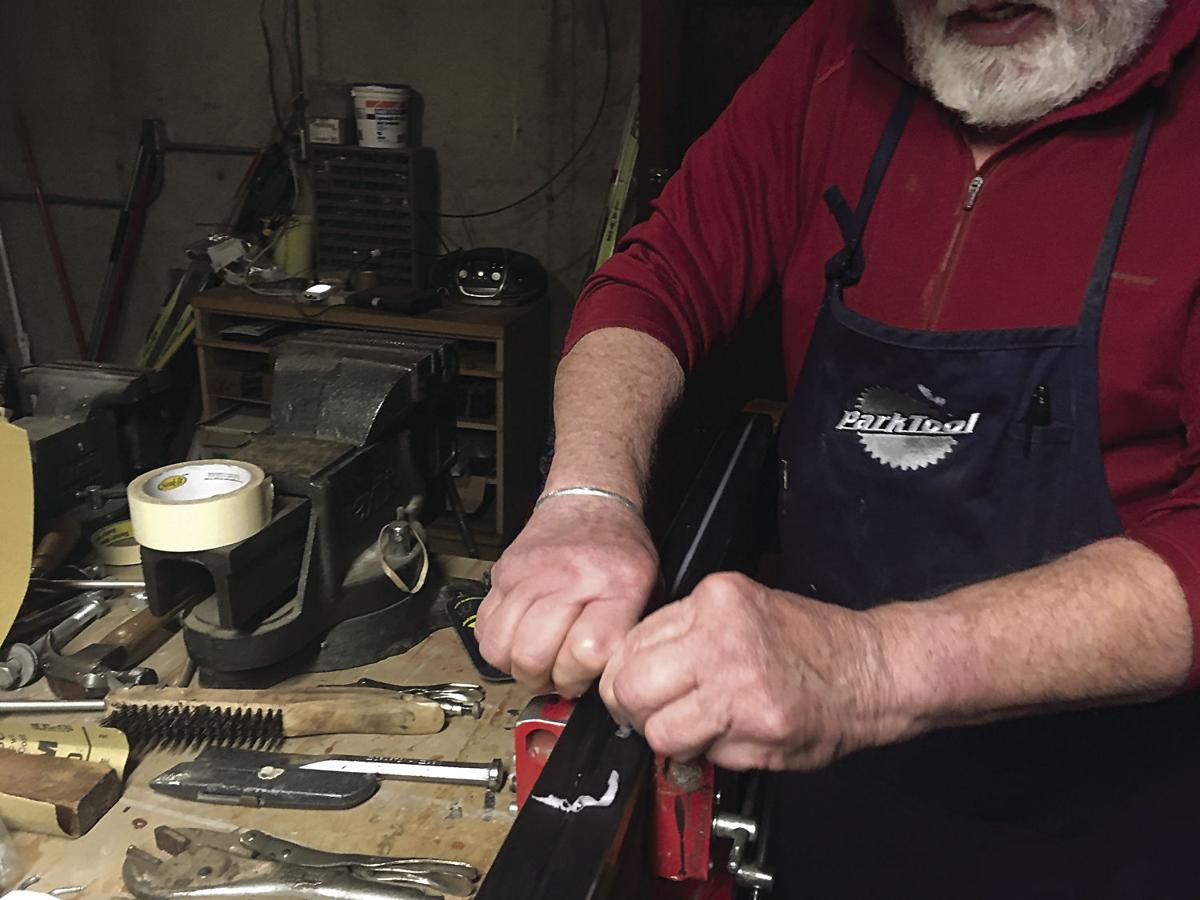 Peter Minnich cleans out the wax in the ski's grooves while it's still warm by using his Swix Multiscraper. (SALLY MCMURDO PHOTO) 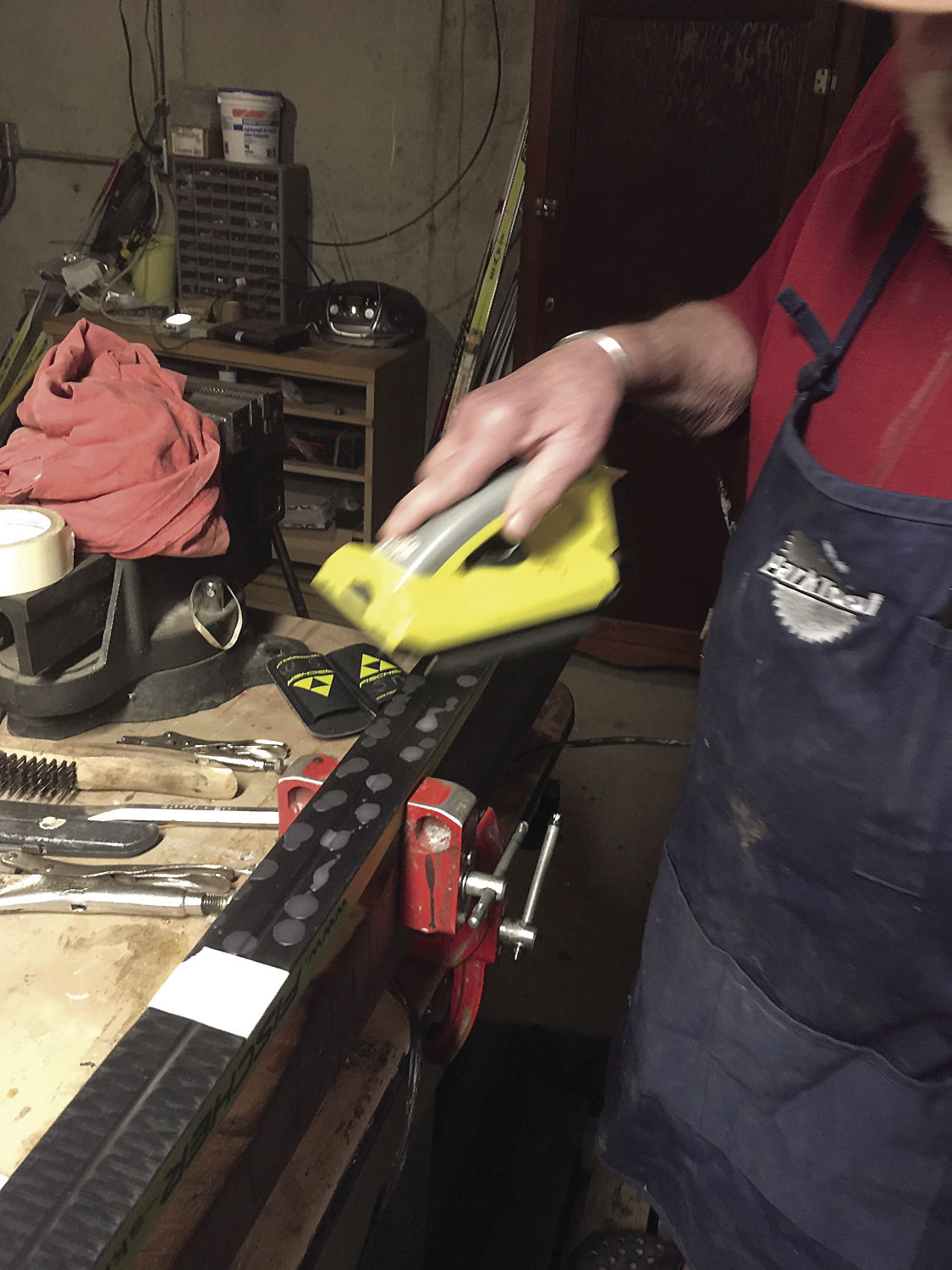 The waxer slides the hot iron quickly and smoothly over the spots of wax to melt it evenly onto the base. (SALLY MCMURDO PHOTO) 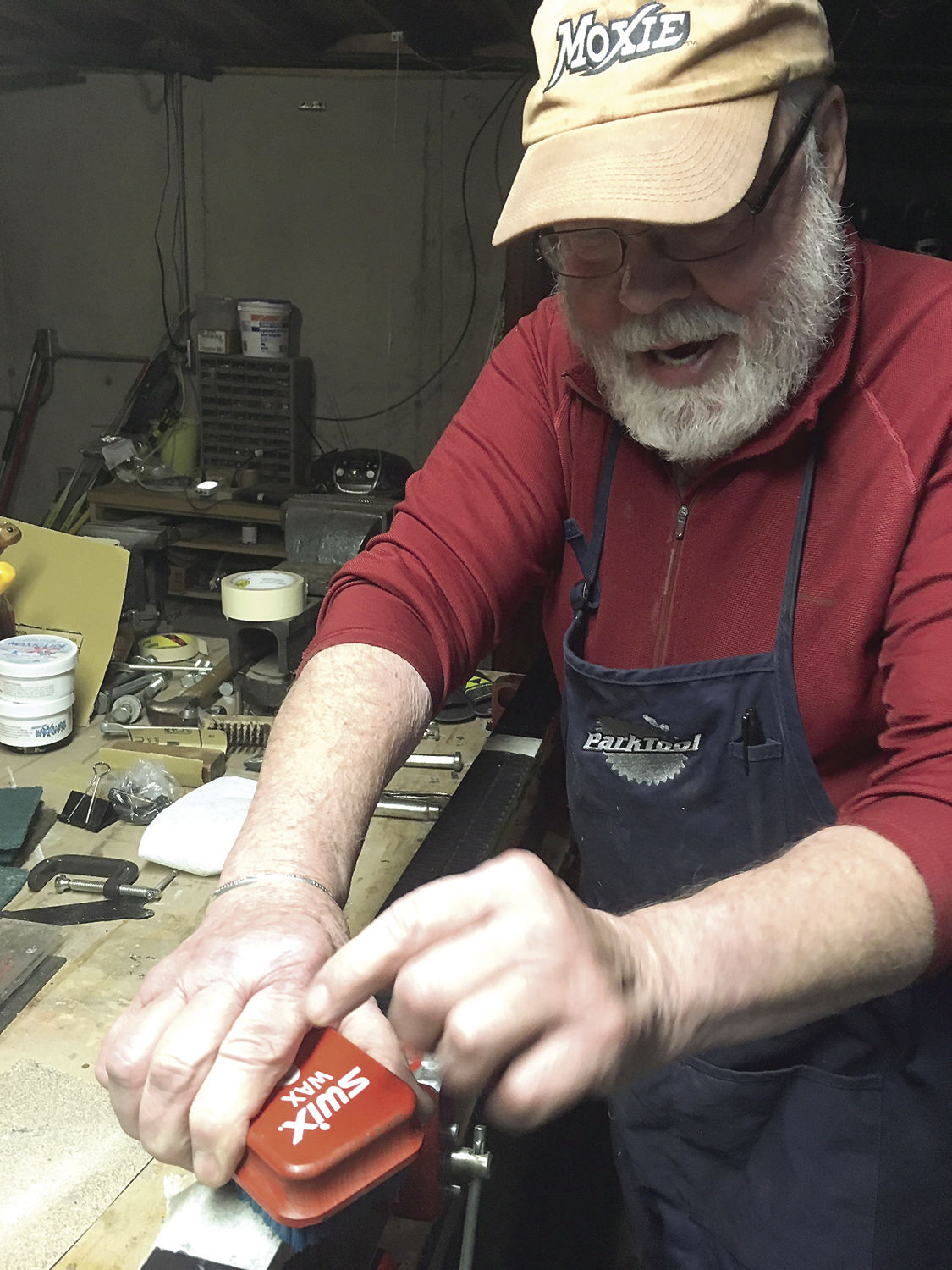 Peter Minnich sets up the homemade wooden ski jig to get ready to wax some skis. (SALLY MCMURDO PHOTO)

Hold the wax against the hot iron to melt it and drip wax onto the ski. (SALLY MCMURDO PHOTO)

Peter Minnich cleans out the wax in the ski's grooves while it's still warm by using his Swix Multiscraper. (SALLY MCMURDO PHOTO)

The waxer slides the hot iron quickly and smoothly over the spots of wax to melt it evenly onto the base. (SALLY MCMURDO PHOTO)

There’s new snow and my skis aren’t ready to go. It’s time to wax some skis. Doing it now will have me ready when the mood and conditions call me out to ski.

There are two functions of Nordic ski wax: glide and grip. Within those categories, there is a vast array of products. For the purpose of this article, I’m focusing on glide waxing, also known as “hot-waxing.”

It’s where I start with my skis — classic, waxless and skate — they all need glide. It takes the most time, so if I do it in advance, I’m almost ready to go when the snow conditions call me to ski.

Why wax your skis?

As Steve Hindman said in his book, “Cross-Country Skiing, Building Skills for Fun and Fitness,” “Periodic waxing lets both waxable and waxless skis glide as they were intended to do and makes the base last longer.” Whether you’re a racer or a recreational skier, you’ll enjoy your skiing more if you have good glide and your waxed skis will last longer.”

Who does the waxing? You can take your skis to a ski shop to have them waxed or you can learn to do it yourself. It all depends on what you want to spend in time and money, how comfortable you are hot-waxing your skis, what you have for equipment and space and how crucial are the results.

We wax our own skis because we have space and equipment and my husband has the know-how.  But, for others, it’s worth it to have someone else wax their skis. It’s not that expensive unless you have a lot of skis to wax. I checked the prices at Gorham Bike and Ski Shop in Jackson. A basic hot wax treatment was $15. It includes cleaning the skis, applying soft hot wax, letting the skis cool completely, then hand scraping and brushing. For more elaborate treatment, they also offer XC Hot Box Waxing for $40 and XC World Cup Stone Grinding for $70.

What equipment do you need? If you’ve decided to wax your own skis, Hindman says, “You need four things: a selection of glide wax, an electric iron, a ski scraper and a place to work.” I’d add time and a willingness to learn.

A “place to work” may be the hardest ingredient to find if you live in an apartment or condo. Waxing is messy! You might have to put down plastic to protect your floors and rugs from wax scrapings.

Another option for those who don’t have place to wax is to go to local touring centers where there’s a free “wax room.” Bring your own waxes, brushes and scraper, and usually your own iron and use their benches and ski vises. Many have vacuums nearby to clean up your mess after waxing. Some centers even have irons you can use if you don’t have one or left it at home. Avoid crowded weekends, go midweek and early to get a bench.

If you’re setting up your own wax room, you’ll find it much easier if you have a wax bench. You can make one by attaching ski vises ($100-120 at Akers or Amazon) to a workbench. We did that, but clamped a homemade wooden jig on it to give the ski support when we were waxing. You can also purchase a Swix wax table and Profile set from Akers for $265.

Build up your wax selection over time. Start with the least expensive glide waxes that cover 3-4 temperature ranges so you can choose the right one for the temperature and snow conditions. Ask at your local ski shop or outdoor center which they would recommend. High-performance waxes are expensive, so save your money until you know what you’re doing.

Ski scrapers are sharp pieces of Plexiglas used to scrape off wax. They are fairly cheap, $3-$8, so buy several stout ones. I like the Swix Multiscraper ($3) that has special groove cleaners to get the wax out of the ski grooves. Scraper edges need to be sharpened every time you use them by rubbing the edges over sandpaper.

A good iron is a must. Don’t try using an old steam iron or other clothing irons. Temperature control is too iffy and you run the risk of overheating your base and damaging your skis. Buy a ski iron. They come in many price ranges and are available at local ski shops. Akers sells a Swix iron for $55. You can also get more expensive ones with digital thermostats.

Ski brushes are important, too. After scraping, brushing the ski is a way to reopen the structure and remove any excess wax, so having a good brush is a necessity. There are all kinds of nylon and combined brushes you can buy ranging in price from $15-$50. Ask at your local ski shop which one they would recommend for all-purpose use.

Other supplies that come in handy are sandpaper (for sharpening scrapers), Scotch Brite pads (for cleaning off excess wax), a piece of metal to put a hot iron on, and a toolbox for organizing waxes and tools. For cleaning skis off before waxing, clean cloths, Scotch Brite, wax cleaner or a little citrus base solvent will remove dirt and old wax. A good apron will keep wax off your clothes.

If you don’t know much about waxing, check out waxing clinics at Nordic centers, watch YouTube videos and purchase Nat Brown’s book, “The Complete Guide to Cross-Country Ski Preparation.”  Ask the ski techs at the Nordic shop or get advice from fellow skiers. Everyone will have an opinion about the best way to wax.

Steps in the waxing process: 1. Clean the base. 2. Determine the area to be waxed. 3. Use the iron to melt wax onto the ski. 4. Let skis cool. 5. Scrape, then scrape again. 6. Brush and Scotch Brite, and use ski ties to separate the bases, protecting the wax job.

Peter Minnich put on his apron, descended into the basement and set up the wax jig. He turned on the wax iron to warm it up. I handed him a no-wax ski, which he cleaned quickly with Scotch Brite. With masking tape, he marked the ends of the textured grip zone so he wouldn’t glide wax over it. On a waxable ski, you would do this to protect the grip wax pocket and save wax.

When the iron was hot, he wiped it off with a clean cloth and started melting the selected wax by holding the edge of the wax against the iron, dripping wax along the ends of the ski. He then quickly ran the iron over the wax to melt it smoothly into the surface, never stopping lest he overheats the ski. When the wax was smooth, he let the skis cool but removed the wax in the grooves while it was still soft.

When skis cooled down, he sharpened his scraper on sandpaper and proceeded to remove the excess wax by angling the scraper and bending it slightly with his thumbs. Long ribbons of wax came off the skis. He kept scraping until most of the wax was removed, then he used Scotch Brite to remove the rest. He then brushed vigorously to remove the excess wax and restore the structure. The surface was smooth and shiny and ready for glide — it’s time to go skiing!

Sally McMurdo is currently a cross country ski instructor at Jackson Ski Touring Foundation. For almost four decades, she has explored New England’s groomed and ungroomed trails on all kinds of skis.