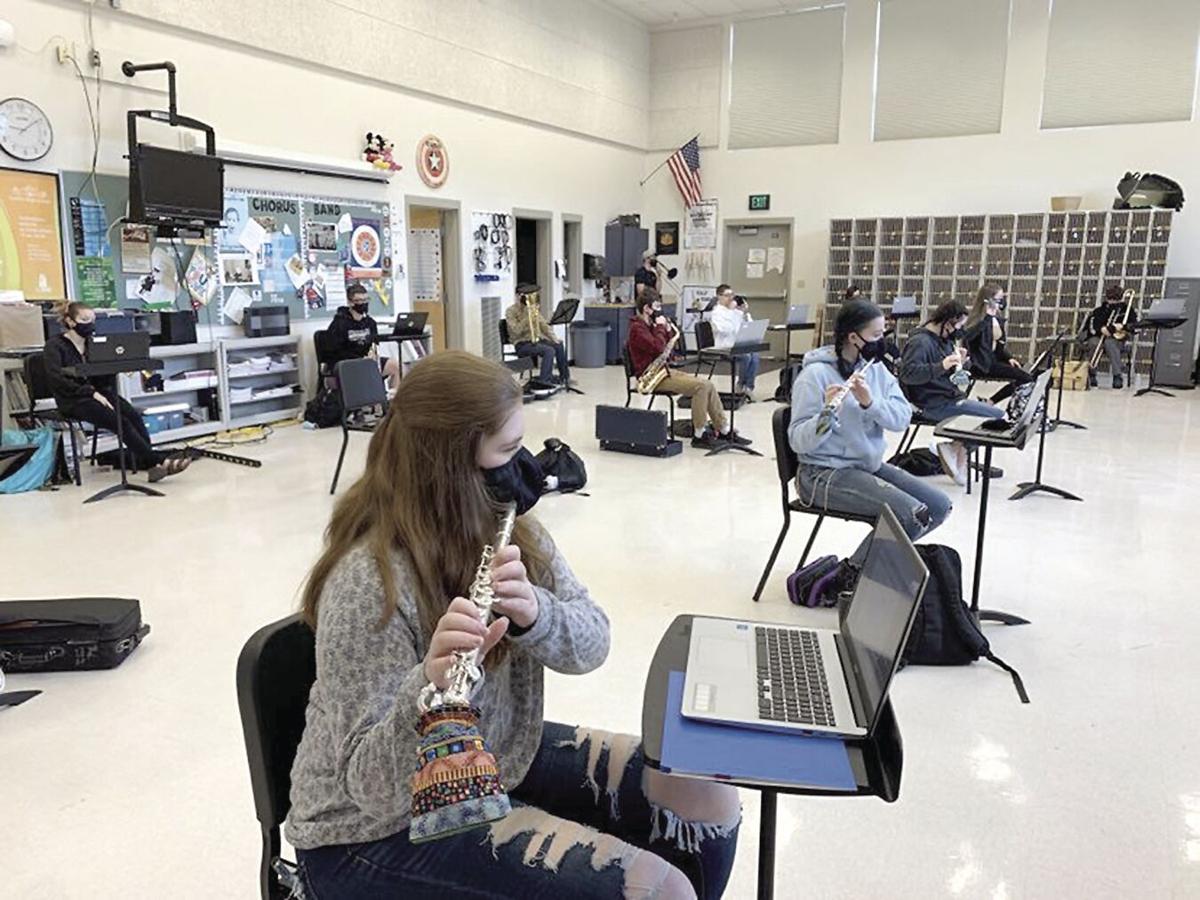 Kennett High music students got the opportunity to play together for the first time in 14 months on Tuesday morning. (BOBBY GRAUSTEIN PHOTO) 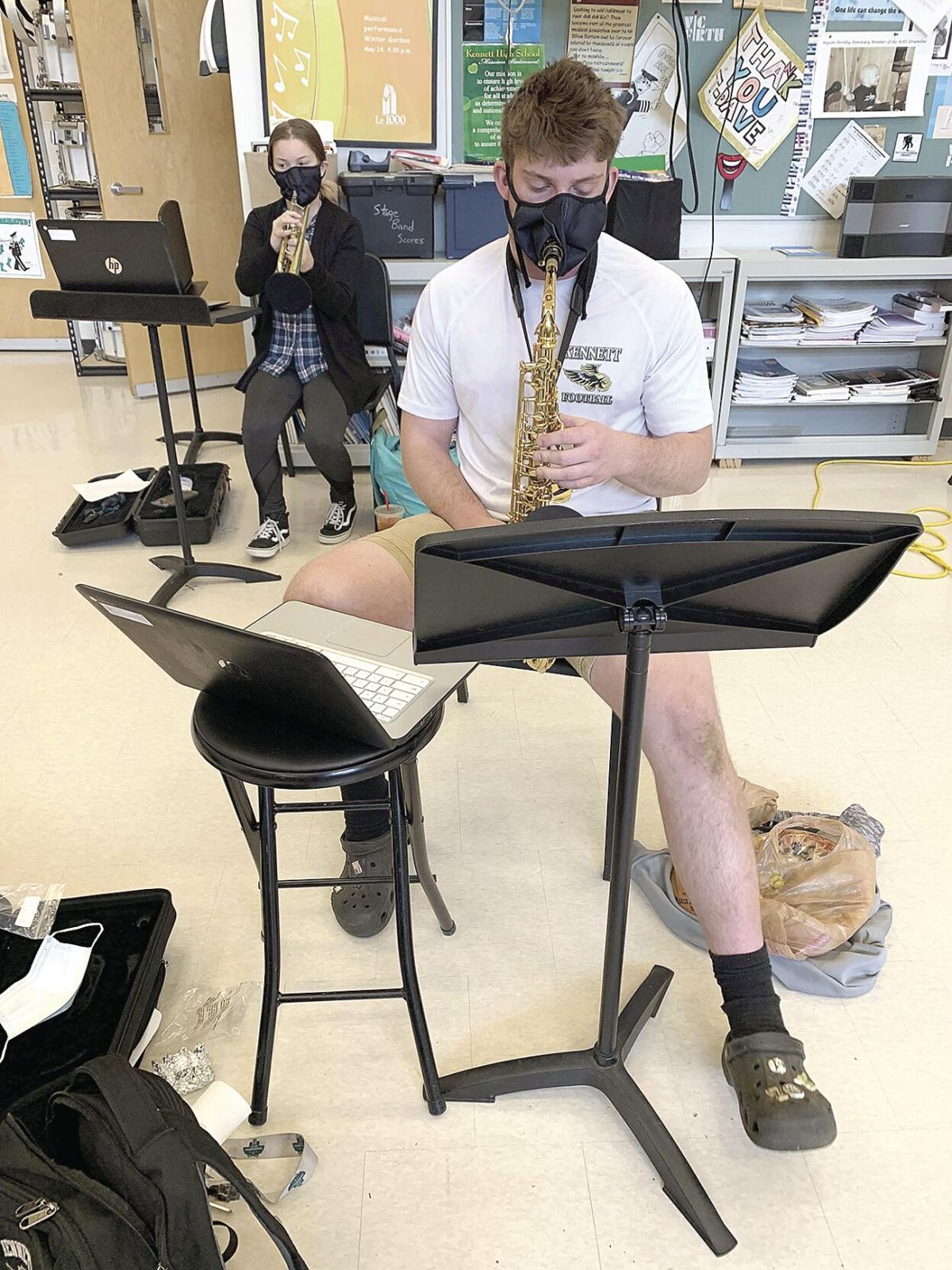 Kennett High senior Graustein (right), the president of the KHS Band, plays the saxophone while fellow senior Molly Damon plays trumpet on Tuesday morning, marking the return of in-person music with for the Eagles for the first time in 14 months. (THERESE DAVISON PHOTO) 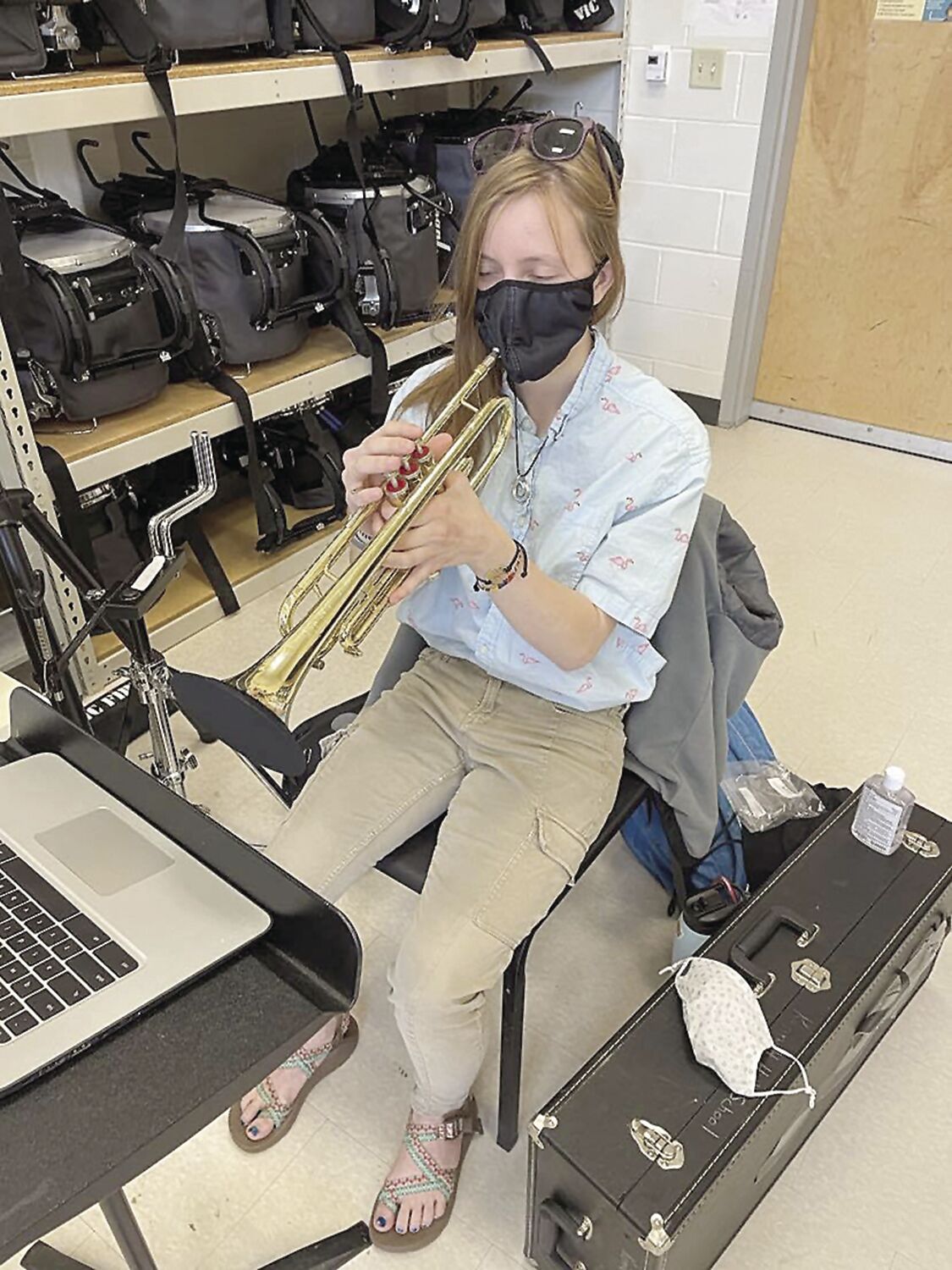 Kennett High senior Hayleigh Young, the vice president of the KHS Band, plays trumpet on Tuesday morning, marking the return of in-person music with her fellow Eagles for the first time in 14 months. (BOBBY GRAUSTEIN PHOTO) 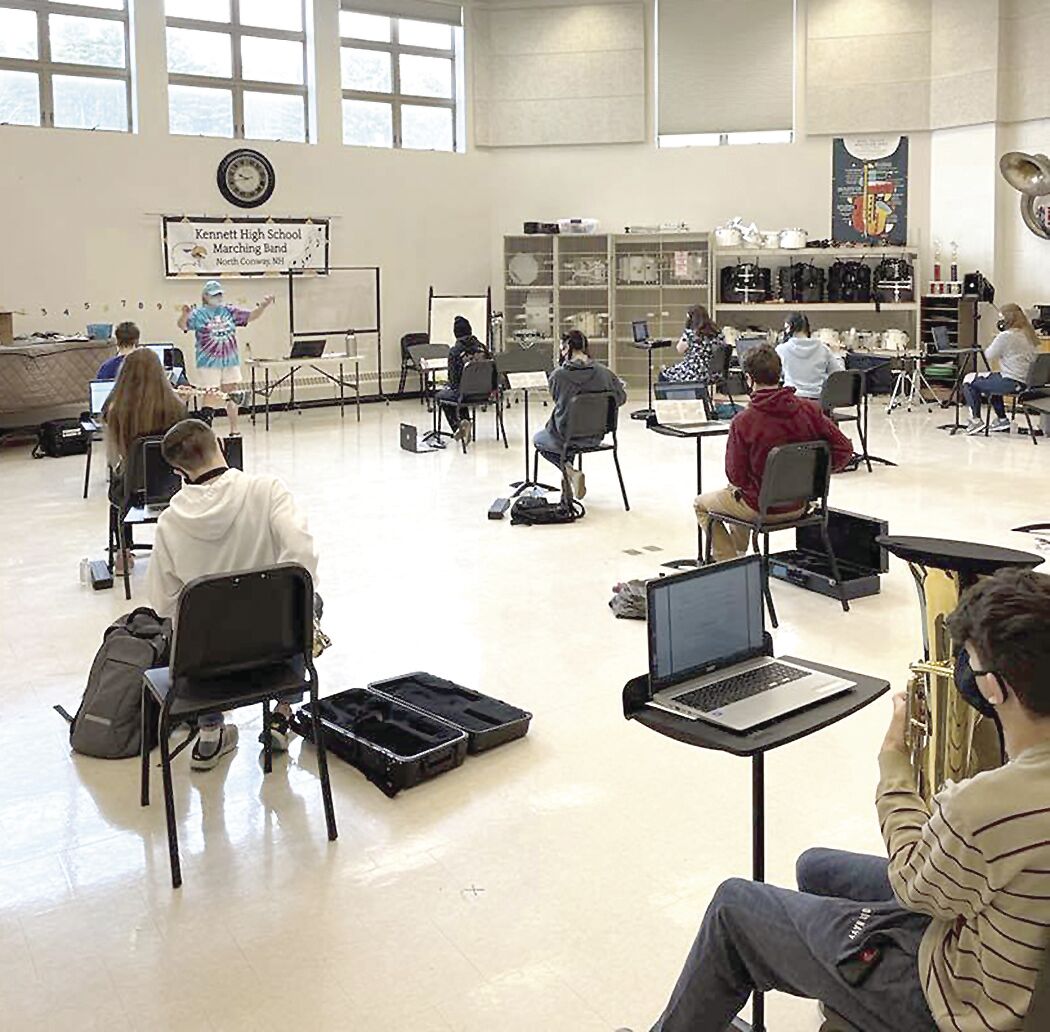 Kennett High music students got the opportunity to play together for the first time in 14 months on Tuesday morning. (BOBBY GRAUSTEIN PHOTO)

Kennett High senior Graustein (right), the president of the KHS Band, plays the saxophone while fellow senior Molly Damon plays trumpet on Tuesday morning, marking the return of in-person music with for the Eagles for the first time in 14 months. (THERESE DAVISON PHOTO)

Kennett High senior Hayleigh Young, the vice president of the KHS Band, plays trumpet on Tuesday morning, marking the return of in-person music with her fellow Eagles for the first time in 14 months. (BOBBY GRAUSTEIN PHOTO)

CONWAY — “One year, one month, two weeks and four days” — that’s how long it had been since music students at Kennett High School got the opportunity to play collectively due to COVID-19, according to Dr. Therese Davison, music director for the Eagles.

Tuesday turned out to be an emotional day for both Davison and her students.

Thanks to the arrival of musical PPE (personal protective equipment) from North Carolina, the hometown flock brightened the campus with the sound of music. And the first song?

“The most important song a band can play,” said Davison, “and that’s ‘The Star-Spangled Banner.’ I have to say, they sounded pretty darn good. The kids were over-the-moon happy.”

She added: “I was surprised by how much they remembered. They’re getting to know an old friend after being apart. They will sound even better when we can get back to a more normal routine.”

The last time the Eagles had played as a band had been on Friday, March 13, 2020, the final time they did face-to-face instruction that school year.

“The classes had been meeting, but we’d not been able to play,” Davison explained.

With most of the staff having received at least one round of the coronavirus vaccine (350-plus SAU 9 employees are scheduled to receive their second Moderna shot on Saturday), and the vaccine becoming available to children aged 16 and older, a pathway to music became more possible.

“As soon as I got the word that we could start playing, I searched the internet for musician’s PPE that was in stock,” Davison said.

There is actually PPE designed specifically for musicians.

“The music industry was pretty quick to respond to COVID-19,” said Davison. “Masks for playing different instruments were designed and tested. The head joints are so different for the flute and wind players.”

Davison ordered different masks, along with instrument bell covers, which according to Davison, “do not affect sound” and are common for “some big-time college bands, who use them more as visual. For us, it’s one more layer of protection.”

She added: “(The PPE) was out of stock in a lot of places, but I was able to find one in North Carolina that had just restocked the day before I called. We were able to expedite the order so we were able to start this week. I did more research on PPE than I ever thought I would.”

Davison was sly in letting students know that they were going to be allowed to play music together again. While the Eagles were on remote learning last week to an uptick in COVID cases, Davison set up an online game of Kahoot, which she shared with the students during a Google meeting online last Friday.

“It’s a game you play where you ask questions and the kids log in to try to answer as quickly as possible,” Davison explained.

The first question, Davison asked was, “I’ve practiced my instrument enough at home to remember most or all of the notes that were taught to me previously?”

The second question: “What’s this picture of?” It was a photo of a UPS order packing slip.

Third: “TD ordered something for us, what do you think it is?” The answer was safety items.

That was followed by, “What kind of safety items did she order?” The answer was musician PPE.

The next question, which came with multiple choice answers was, “Why do you think she ordered them?” The choices were A, “In case we ever get to play again;” B, “We get to play next week;” and C, “It’s always good to play it safe.”

The final question was, “Did she just tell us we get to pay our instruments next week?”

“Everyone was overjoyed,” Davison said. “Some couldn’t believe we were actually going to get to play this school year.”

The equipment arrived on Monday. Davison spent that afternoon reorganizing the room, setting up social distances for playing. For most instruments, the Centers for Disease Control recommend 8-10 feet of distance between band members. For trombone players, the suggested distance is a minimum of 9 feet.

“It’s pretty fun to be able to play again,” said senior Haleigh Young, who plays the trumpet and plans to study music education at Castleton University in Vermont. “For the first time playing in love a year, I thought we sounded pretty good.”

Fellow senior Mila Dorji, who is one of the drumline captains and also plays bass and plans to study guitar performance at Concordia University in Montreal, Canada, next fall, is thrilled to hear his classmates playing together.

According to the National Education Music Company website masks “for woodwind and brass players incorporates a unique flap that opens easily for mouthpiece insertion and closes automatically when removed, providing enhanced protection as compared to homemade solutions. It now includes a sewn-in nose bridge with a deeper pleat to enhance comfort due to less slippage from jaw movement, and a flap lock to provide a better seal.”

“Unlike other masks with just a slit to accommodate the mouthpiece, this musical instrument face mask was specifically designed for wind instrument players with a true embouchure opening making it easier to align the mouthpiece into proper playing position. A unique front flap that automatically closes when the mouthpiece is removed provides superior protection during rests but does not impede the performer’s ability to take in enough air for even the most demanding musical passages.

Wearing a mask while playing the trumpet is “very weird,” according to Young.

“The mouthpiece is placed more to the right than the center (of the mask),” she explained, adding, “Masks get super wet, but it’s all worth it to be playing.”

At the end of each class, Davison collects the masks, which each student has written their initials on with a silver Sharpie pen, which washes and drys them in time for the next day.

“It’s worth it to get to play, well, well worth it,” Davison said, smiling.