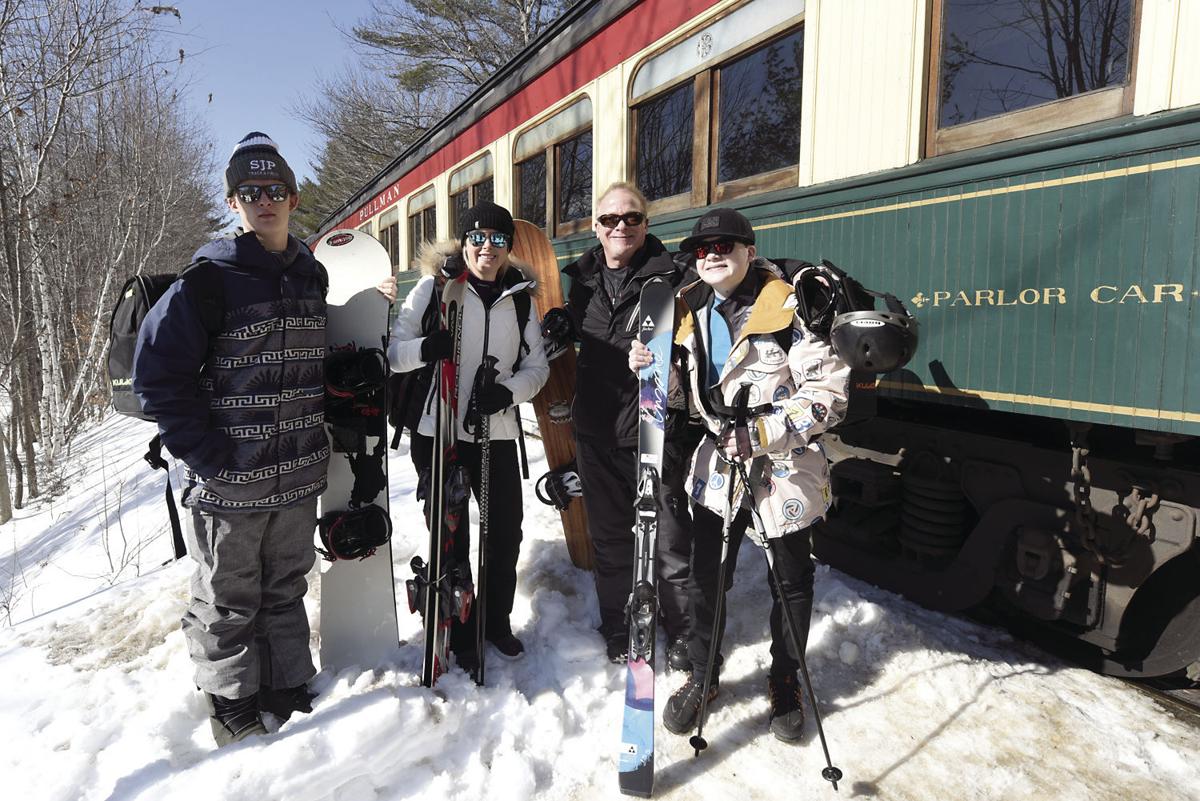 The Mulligans of Newburyport, Mass., pose in from the snow train after arriving at Attitash Monday. From left are Ryan, 16, Margaret, Patrick and Lucas, 14. (JAMIE GEMMITI PHOTO) 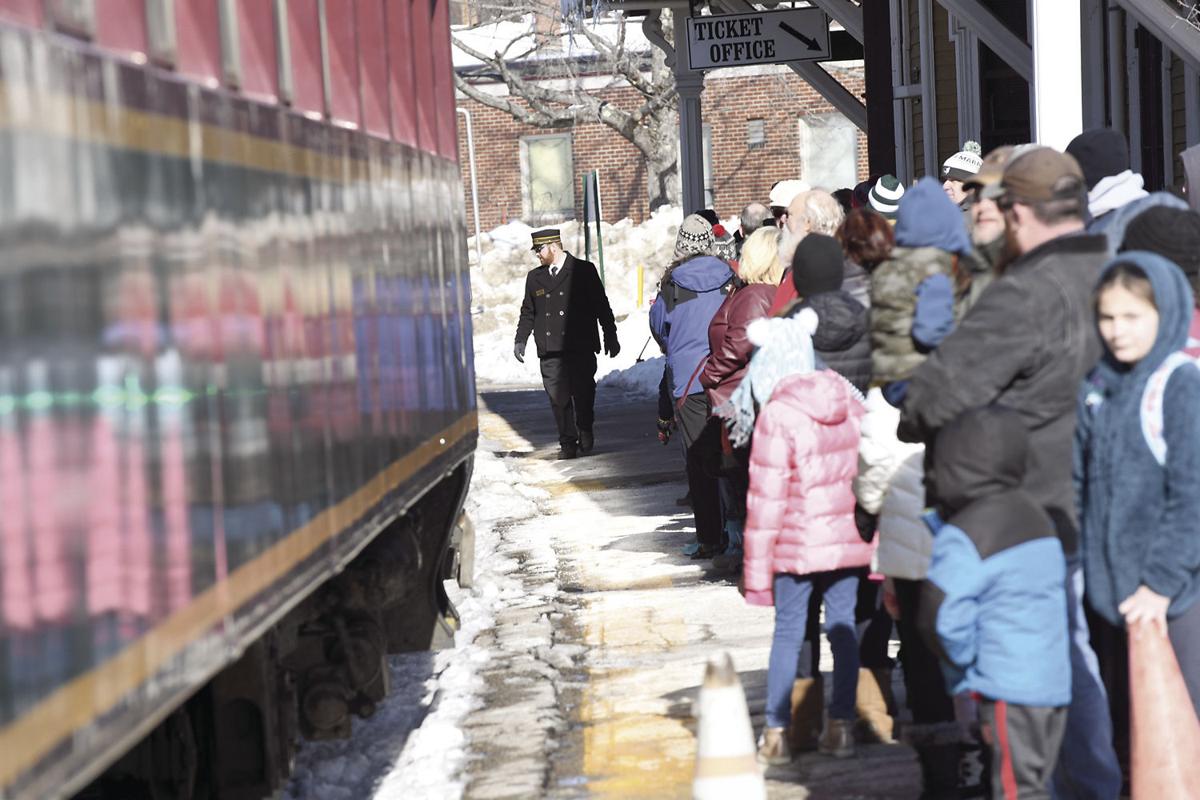 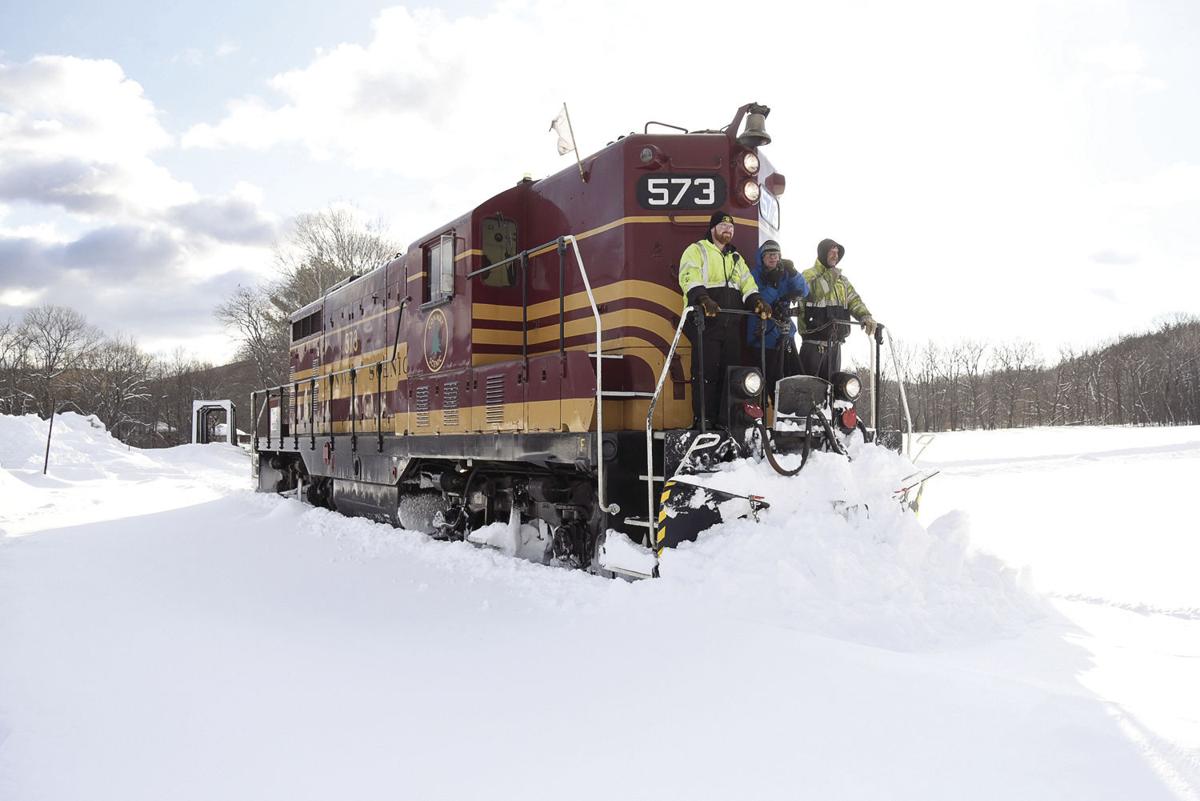 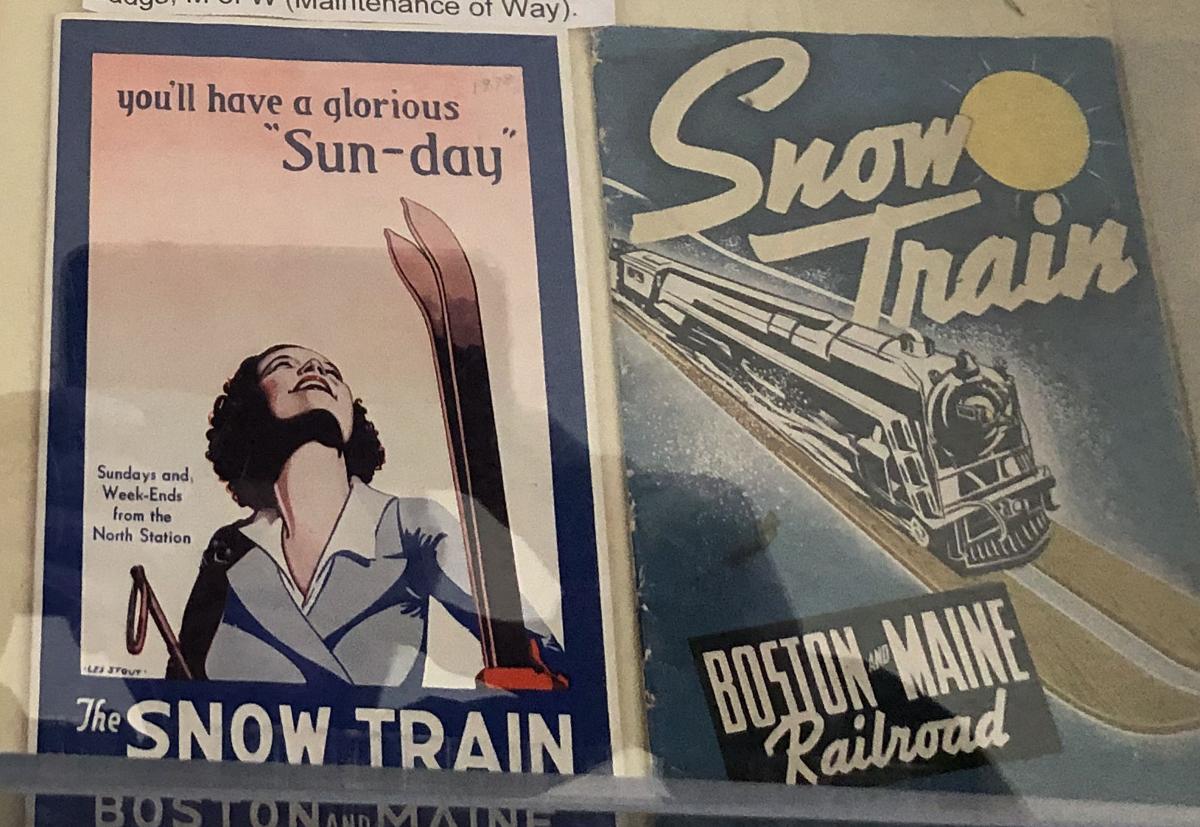 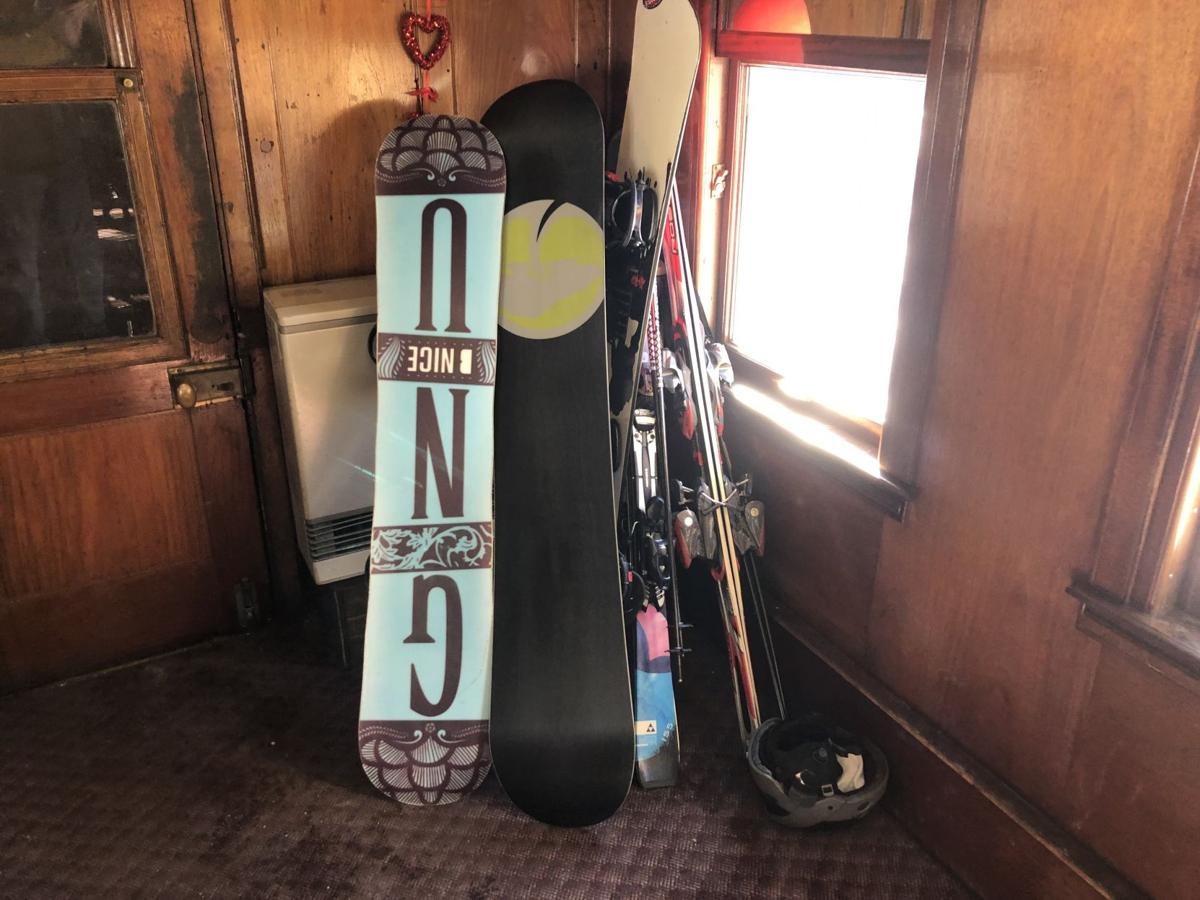 Skis and boards are stored at the end of the Gertrude Emma, one of Conway Scenic’s restored vintage cars. (TOM EASTMAN PHOTO) 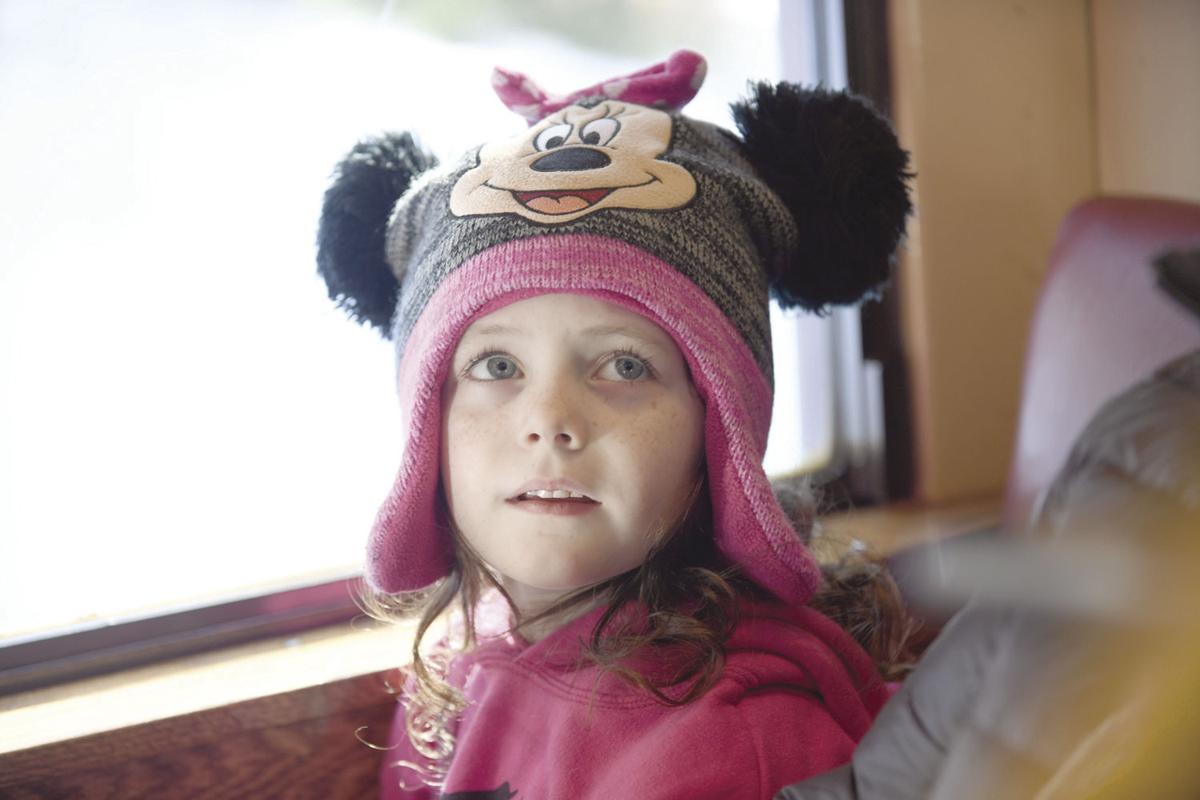 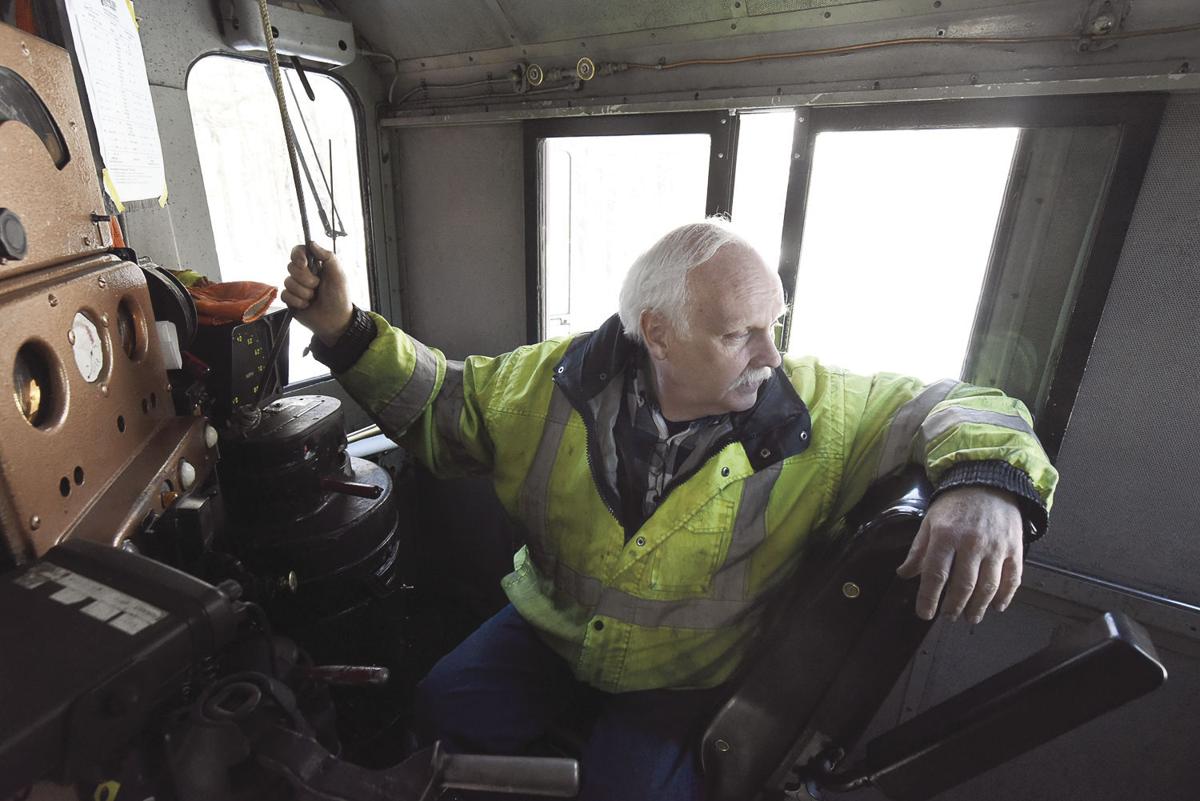 The Mulligans of Newburyport, Mass., pose in from the snow train after arriving at Attitash Monday. From left are Ryan, 16, Margaret, Patrick and Lucas, 14. (JAMIE GEMMITI PHOTO)

Skis and boards are stored at the end of the Gertrude Emma, one of Conway Scenic’s restored vintage cars. (TOM EASTMAN PHOTO)

CONWAY — “You’ll have a glorious ‘Sun-day,’” boasts a vintage 1930s Boston & Maine poster in a display case in the lobby of the Conway Scenic Railroad’s 1874-built station.

The poster shows a young lady holding her wooden skis and basking in the rays of the sun on a winter’s day — the kind of day winter sports lovers enjoyed this vacation week (apart from Tuesday’s snowstorm).

Although the last dedicated “Sunday Winter Snow Sports Train” made its last run from Boston’s North Station to Conway in 1951, skiers, snowboarders and railfans are getting to relive the romance and fun of riding the snow trains this month on the Conway Scenic Railroad, which launched a special “Snow Train” to Attitash Ski Resort in Bartlett on Feb. 15.

Daily runs continue through Feb. 29, with departures from North Conway every 90 minutes, starting at 7:30 a.m.

The last departure from North Conway will be at 4:30 p.m. and the last southbound train leaves Attitash at approximately 6 p.m.

Riders can stay onboard for the 90-minute round trip or get off to spend the day at Attitash, whether skiing or dining at Matty B’s Mountainside Cafe. (The boarding ramp at Attitash is located behind Matty B’s.)

Attitash patrons, meanwhile (including guests at the Grand Summit), can use the train to ride into North Conway to shop and dine without having to deal with holiday traffic.

“The response has been very strong, beyond our expectations for a start-up event,” said David Swirk, president of the CSRR.

“Originally we were going to be using our Budd car, Millie, but the demand was so great that from the start we added a full train instead of the single self-propelled RDC (Rail Diesel Car),” said Swirk, who with wife Rhonda purchased the tourist railroad from Russ and Dot Seybold in 2018.

CSRR Marketing Director Brian Solomon added: “We knew right from the get-go Saturday morning when we looked at the manifest that Millie wasn’t going to be enough.

“We had the capability of adding more cars, so that is what we did. As for Millie, she is a great car, and there will be plenty of opportunities for rail fans to ride her,” he said.

Because there’s no turn-around at Attitash, however, in switching to a full train, CSRR has had to use two diesel-electric engines, one for pulling the train to Attitash, and the other to pull the cars on the return trip back to North Conway.

On a recent excursion — Monday’s 10:30 a.m. departure — 105 passengers were queued up for the trip to Attitash’s Mountain Station.

“We had maybe 50 or 60 reservations this morning, and another 40 or 50 showed up. Sales are excellent!” enthused Solomon, who was hired a few months ago to take over from longtime marketing director Susan Logan.

Among those waiting to board Monday morning was the skiing and snowboarding Mulligan family of Newburyport, Mass. — Patrick and Margaret Mulligan accompanying sons, Ryan, 16, and Lucas, 14. (Margaret and Lucas are skiers, and Patrick and Ryan are boarders).

“We come up all the time,” said Margaret. “We saw the train going right by our windows at the Eastern Slope Inn, so that’s when we thought it would be a fun way to get to Attitash, which we were planning to go to today anyway.

“The Conway Scenic doesn’t usually run in winter,” she continued, “so I went online to find out more about these special snow trains.”

Patrick said: “We had skied out west. going from Denver to Winter Park, Colo., and they had a snow train there.”

The Mulligans thought the North Conway snow train offered several benefits — namely, they could ride from the inn to the ski area without having to use their car. And during the busy February vacation week, when parking is at a premium, there was that added benefit as well.

“Plus,” said Patrick, “should the boys want to stay longer and we want to come back into town, they can ride a later train.”

Once aboard, skiers and riders stored their gear in a corner of one of the passenger cars — most were already wearing their ski clothes, the quicker to hit the slopes at Attitash.

As the train rolled along at a steady clip along the 8 miles of track between North Conway and Bartlett, sensational views could be enjoyed from the four cars of the Moat Mountain Range to the west, portions of the mostly frozen Saco River and the Intervale ski touring trails of the Mount Washington Valley Ski Touring and Snowshoe Association.

Another skiing family, hailing from New York’s Long Island, also planned to make a day of it on and off the slopes, with grandparents also riding the train.

“Our daughter took the kids and us on the Journey to the North Pole on the Conway Scenic last December, so we were kind of familiar with up here,” said Peter Galante and his wife, Joanna, who were having a family vacation in the valley.

“My daughter Melissa (Catanese) is an avid snowboarder. She comes here every year for February vacation. And our daughter Janene comes up every February vacation week. My grandchildren are learning to ski — we’re having a fabulous time. It’s so beautiful up here!” said Joanna, who noted that her family was staying at the Christmas Farm Inn and Spa in Jackson, and skied at Black Sunday, then went for a sleigh ride and did some ice skating at the Nestlenook in Jackson and they also planned to cap their train ride with snowboarding and skiing at Attitash.

As the train rolled past the Red Parka Pub and Cider Mill Restaurant in Glen, Catanese said: “I learned of this through my sister, who has been coming here for years. She saw the ad in the paper and said, ‘Oh my gosh, they’re doing a snow train. We need to do this!’ because my nephew, Chris Adams, loves trains. He’s 9, and he loves everything about trains.”

“Trains are neat!” said Chris, a young hockey player who loved skating at the Nestlenook. His dad, Keith Adams, also of Long Island, said it made for a great family outing.

“Between the skiing (most of us snowboard) — and we’re going to try snowmobiling tomorrow — the ice skating … There is so much to do here,” he said.

Once the train arrived at Attitash, the passengers disembarked at the siding at Attitash Mountain Village. A few carried skis and snowboards, heading to the underground tunnel under Route 302; some non-skiers went to Matty B’s for lunch, while others stayed on the train for the return trip.

Rail buffs would no doubt be interested to know the history of the cars running on the train this week. They are:

• Gertrude Emma: Built in 1898 by Pullman in Chicago, it was constructed for the Pennsylvania Railroad for service on its flagship Pennsylvania Limited that ran from Jersey City to Chicago via the famous Horse Shoe Curve at Altoona, Pa. The car was originally a sleeping car. Today, it is one of the oldest standard-gauge railroad passenger cars in regular operation in North America. It is named for Conway Scenic founder Dwight Smith’s late wife.

• Chocorua: This is now a dining car, but historically it was one of the Edison Cars built for the Delaware, Lackawanna & Western’s electric commuter services that ran from Hoboken, N.J., to suburban towns including Summit, Gladstone and Dover, N.J.

• Hattie Evans, named for Hattie Evans of Mount Willard section house fame (Crawford Notch). This is a Pullman-built dining car from 1949 originally owned by the Norfolk & Western Railway. It would have worked famous trains such as the Powhattan Arrow.

• No. 6739 is a coach that was originally a self-propelled electric car used by the Canadian National in Montreal suburban commuter service. Conway Scenic owns several of these cars.

• No. 1133 Mount Washington. This car gives the CSRR overflow capacity in addition to the 175 seats normally available for ticket sales.

During the 45-minute trip back to North Conway, veteran engineer Wally Hills manned the controls.

“If it’s not fun, why do it, right?” he laughed above the rumble of the locomotive, a GP7 127-ton diesel electric built in 1950 by General Motors Electro-Motive Division.

It is slightly less powerful and just a few years older than the CSRR’s GP9 that pulled the five-car train to Attitash.

Tuesday’s snow impacted business slightly, Solomon said Wednesday. He said they did not use the plow during the storm but on Wednesday, he, Swirk, conductor Connor Maher and rail inspector Nate Leary were seen taking an engine out with a plow attachment to clear the tracks all the way to Bartlett before the day’s first run.

Anthony Warren of North Andover, Mass., was among the skiers riding the train in Tuesday’s snowstorm, taking it to Attitash to get in some powder runs. Said Warren upon his return to North Conway Tuesday afternoon: “I was excited to hear about the snow train because my family left yesterday. I was able to catch the train ride to Attitash. It was awesome — I hope it catches on and succeeds because I love this!”

John Lowell, general manager and president of Attitash and Wildcat, said he was very pleased by the interest in the train.

“People have been coming (on the train) to ski, and many have been coming just to see the resort. It’s nostalgic, it’s environmentally responsible, and it’s functional — we are delighted to see it take place,” Lowell said.

SIDEBAR: The history of the snow train

Winter used to be the quiet time, no motorcycles tuned to produce noise that can be heard miles away and a reprieve from the constant train whistle that pollutes the environment. Noise pollution is Bad for your health, environment and is turning the valley into an industrial acoustic zone. Why? For economic profit for a few tourist dollars we tolerate the destruction of serenity. Rev up your engines nature be damned, it is a small wonder people are so stressed and angry there is no silence!