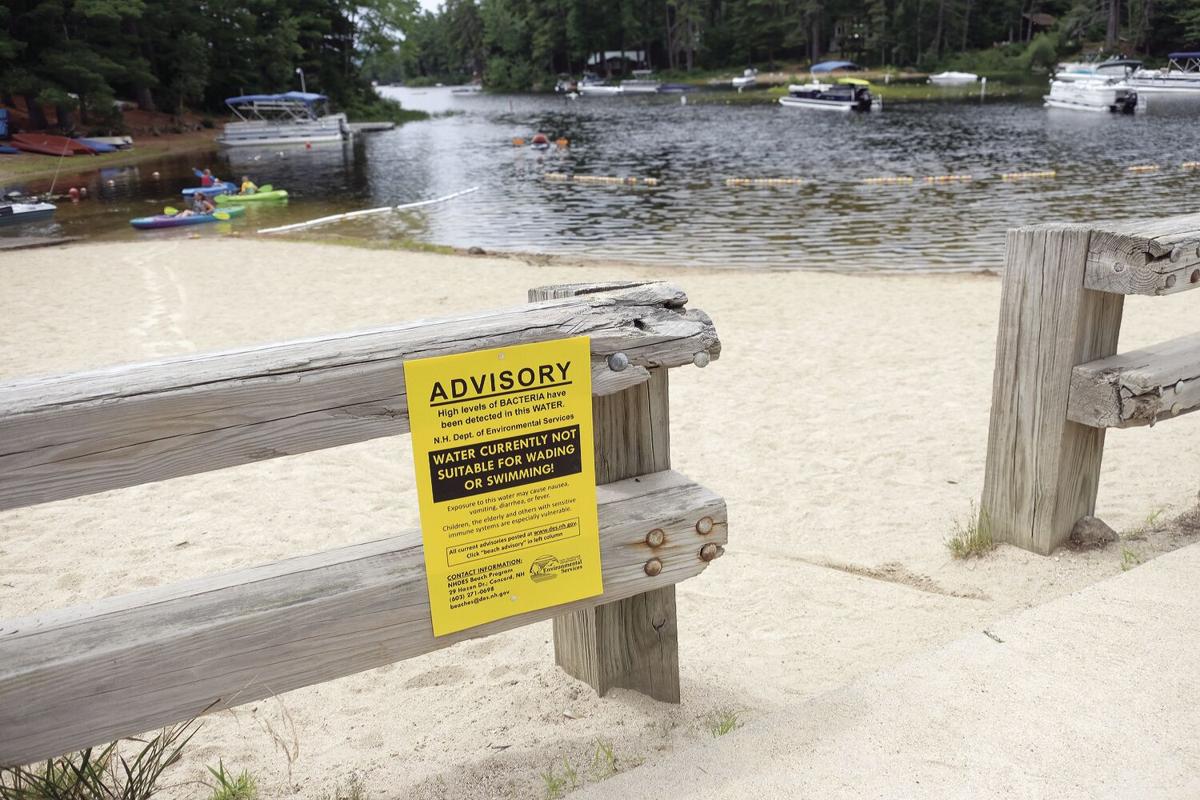 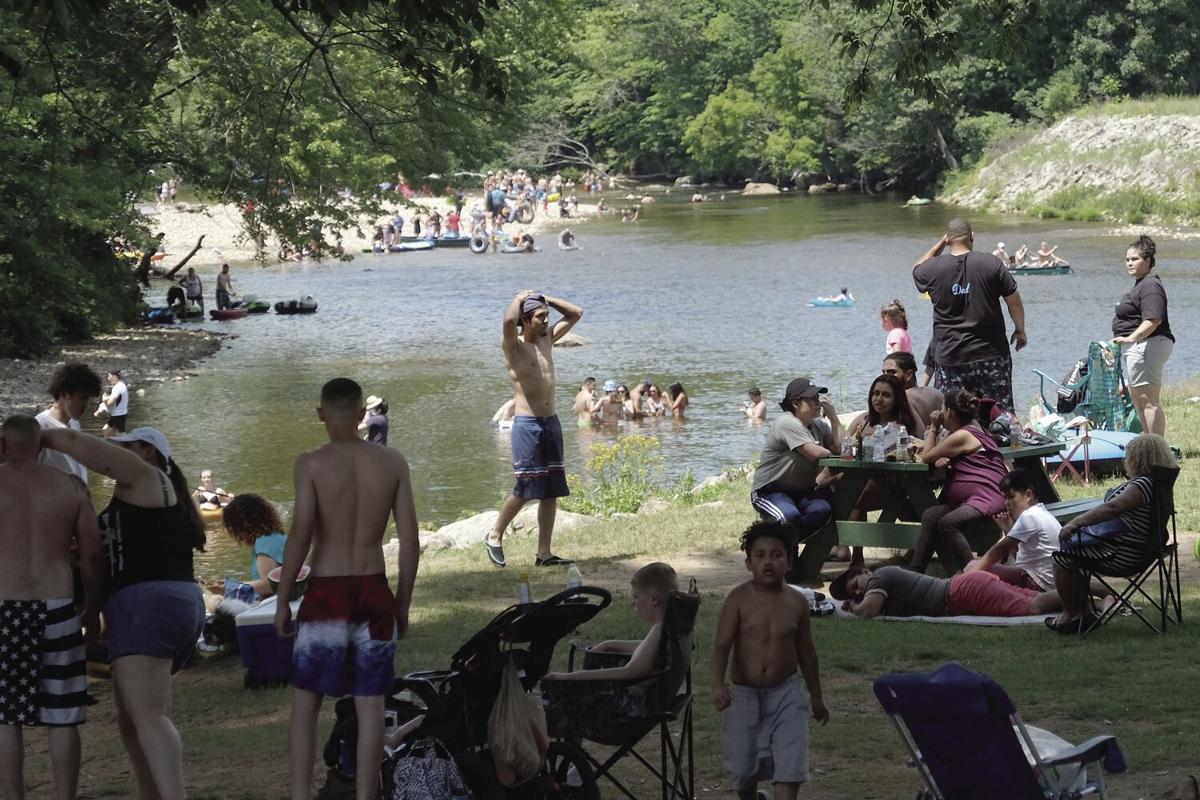 First Bridge on River Road in North Conway was flooded with people on July 4. Large crowds of people have visited the park on the Saco River every weekend since the holiday. (JAMIE GEMMITI PHOTO) 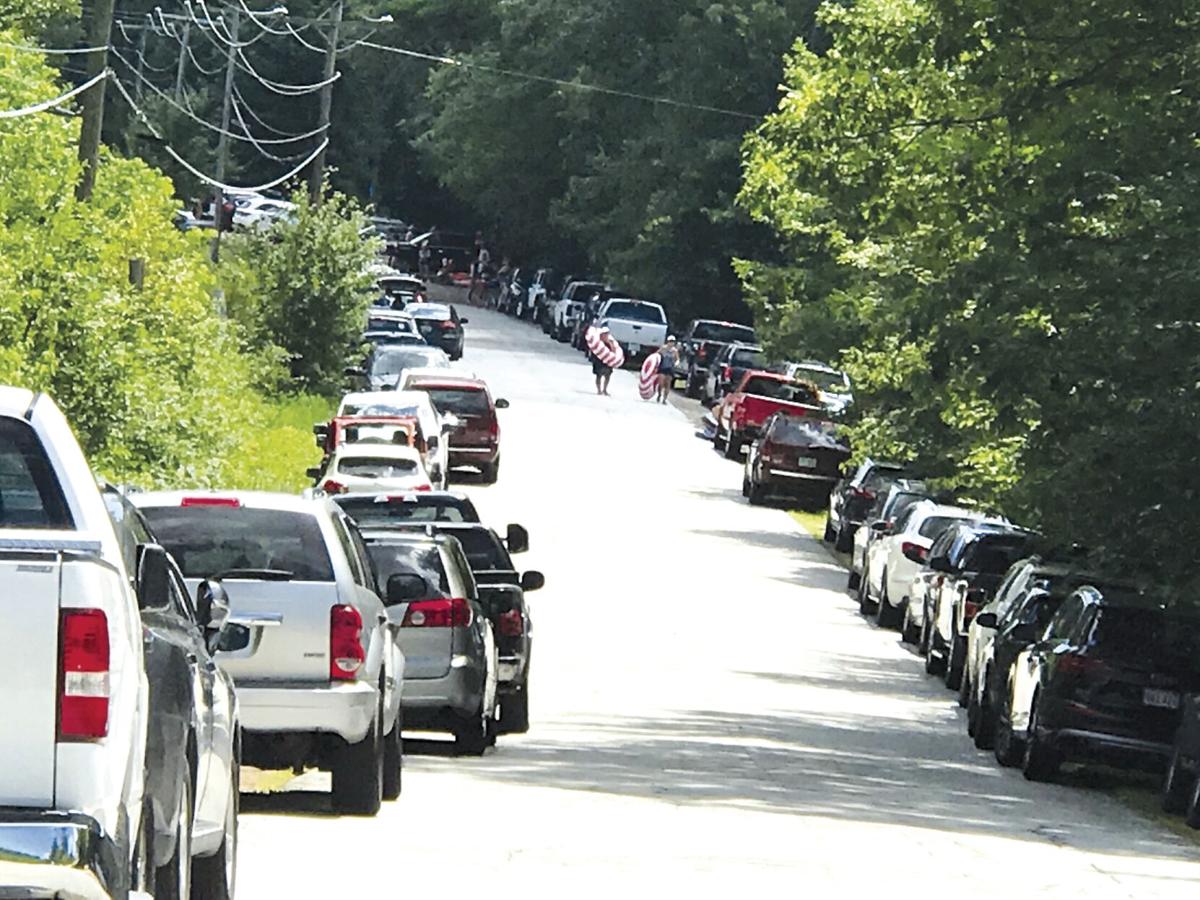 A reader submitted a photo of cas parked along both sides of Meeting House Hill Road on Saturday,  July 18. Charlene Roberts said, “I have lived in the Valley for 50 years and have never seen this many cars or people  on the road  behind the Conway PD.” (CHARLINE ROBERTS PHOTO)

First Bridge on River Road in North Conway was flooded with people on July 4. Large crowds of people have visited the park on the Saco River every weekend since the holiday. (JAMIE GEMMITI PHOTO)

A reader submitted a photo of cas parked along both sides of Meeting House Hill Road on Saturday,  July 18. Charlene Roberts said, “I have lived in the Valley for 50 years and have never seen this many cars or people  on the road  behind the Conway PD.” (CHARLINE ROBERTS PHOTO)

CONWAY — Town Manager Tom Holmes told selectmen Tuesday that the town is being “overrun” with day-trippers clogging popular recreational outdoor spots, many of whom are acting badly.

“We are the Alamo at this point, we are just being overun,” he said.

“Virtually every popular spot in town is having overcrowding issues, too much trash, too much porta potty use,” said Holmes. “I’ve already authorized the addition of two more porta potties at Schouler Park ... We are pumping them twice a week. They are still overflowing.”

Holmes is also getting complaints about crowds and public drunkenness.

“We are even going to put up a small sign at the Washington Street fountain asking people not to swim there,” said Holmes who told the Sun in an email Wednesday  “It was not a joke. We have had a couple of incidents of people, children and adults, wading in the fountain. The town is concerned because there is electricity there in the form of a pump and lights and even though it is safely installed according to code, we are concerned about liability in the case of a malfunction.”

Selectmen laughed when Holmes broke the news about the fountain.

“With or without suits,” asked in Selectman John Colbath.

To which Holmes replied, that he had a report of public nudity at Davis Park.

Holmes said the wait times at Diana’s Baths over the weekends were two hours. Holmes said he went to the Smith Eastman Landing over the weekend to show his wife, Wendy, a big maple tree and he counted 100 cars in that parking lot. He said he had complaints of public drunkeness at the landing as well.

He said the town should plan for how it’s going to deal with more of the same next summer.

“It may be too little too late for this year,” he said.

Selectman Carl Thibodeau, 69, who has lived in Conway all his life, said “the amount of people that are here using outdoor recreation is more than I’ve ever seen,” said Thibodeau. “I don’t know if it’s more people or they are just using the outdoor recreation facilities more.”

According to Thibodeau, the owners of Black Mountain shut down their hiking trails because of litter.

Thibodeau said the traffic elsewhere in town is reasonable but around the recreation sites, it’s “horrifying.”

The crush of people has also affected the Conway Lake public beach, which was was closed Tuesday after the state tested it for bacteria. This comes as the town is apparently being “overrun” with day tripping drunks and litter bugs.

The beach was posted with a yellow advisory notice stating that “high levels of bacteria have been detected in the water” and that the water is “currently not suitable for wading or swimming.” The bacteria may cause vomiting, diarrhea or fever. The water was tested by the New Hampshire Department Environmental Services and the results were given to Recreation Director John Eastman Tuesday afternoon who posted the beach.

“It’s not unusual for us to have a spike in the numbers at least once per year,” said Eastman adding it happens during periods of high heat.

The water was being retested Wednesday and Eastman hopes to have the results today. If they are good, he will reopen the beach.

“I’m at the mercy of the New Hampshire Department of Environmental Services,” said Eastman.

Amanda McQuade with New Hampshire Department of Environmental Services Beach Program told the Sun that Conway beach has “slightly elevated Ecoli levels, which comes from fecal matter from animals like geese or people. She was testing the water Wednesday and said the results would come out today.  She said this can happen after rain and hot days. For more information des.nh.gov.

Also tested are the First Bridge and Davis Park areas of the Saco River, and both of those places are “fine,” said Eastman.

Public bathroom availability historically has been an issue in North Conway and with the closure of the New England Ski Museum, and their bathrooms until August, the situation is worse.

Selectman John Colbath suggested that the town work with the New England Ski Museum which offered public bathrooms last year but will be closed due to the COVID-19 pandemic until Aug. 15.

Holmes said the Ski Museum isn’t obligated to keep its bathrooms open but it’s possible the town could use COVID-19 relief money to pay for the cost of cleaning them.

Selectman Mary Carey Seavey objected to asking the Ski Museum for its bathroom and instead supported the idea of adding porta potties.

The Mount Washington Valley Chamber of Commerce has agreed to cover some of the porta potty expenses, Holmes said.

Seavey said the traffic on East Main Street is “horrendous all the time.” She also grew up in Conway and she attributed the crowds to day trippers.

“They are not courteous enough to take their trash home with them,” said Seavey. “It’s easier for them to throw it on the side of the street ... It’s a one day trip and they don’t care what they do.” She called these day trippers “a discourteous group of individuals.”

Recent police logs are full of misbehavior. On Tuesday, there was a report of a “verbal altercation” at a local resort in which one man was accusing another of “ogling his wife” and another report of a “psych patient” escaping and swimming naked a pool at a condo complex.

Logs from the period between Friday and Monday include various reports of loud parties and a few arrests for drug offenses and driving while intoxicated.

Holmes also asked if the board wanted to purchase radar speed signs that had been budgeted for last year when Conway Lake Hosts and others were concerned about speeders on Mill Street.

“We were a little slow in getting them, and the price has gone up,” said Holmes. “By the time we get them it will be post beach season.”

Selectmen decided there was no point in getting the radar speed signs this year and so if they are to be purchased, selectmen would have to budget for them in 2021.

He said the town could charge non residents for parking at its launch/parking lot but the revenue would have to cover the cost of an attendant so that taxpayers aren’t on the hook.

Seavey wondered why the town was letting non-residents to use the beach and the parking lot at all.

“I think we have reached a point where we have to do things,” said Seavey.

Colbath said the police don’t need anything else to do.

There definitely is a lack of public bathrooms in the No. Conway area, I've noticed this for several years. Traveling in other areas there are usually plentiful public rest areas for tourists. On another note, the reason you have lewd, drunk, and bad behavior is that the judicial system became very liberal over the past 20 plus years. NH used to be conservative and strict, there was hardly any of this bad behavior going on then, so this is what happens when the liberals are in charge.

We've being visiting the MWV from MA every year for about 15 years. This past week was our first trip up in July. Some of the behaviors we witnessed and the size of the crowds were both very unsettling. We drove by Lincoln Woods this past Saturday and the parking had to extend for at least a half mile down both sides of 112. Not sure how these natural environments can sustain these types of crowds.

Maybe we could post attendants (like the Conway Lake hosts) at these locations to take a payment from nonresidents of the Conways and surrounding towns while documenting names and license plates. Valid photo IDs with a corresponding current vehicle registration or tax bill from designated towns would allow locals and second homeowners (taxpayers) to visit freely while others pay a fee. The fees help pay for the attendant and other needs while hopefully serving as a deterrent to those looking to leave trash or otherwise behave badly.

The speeding on Mill St past Conway Lake has been ignored for years. Just post a cruiser down for one hour per day, at a different time each day. The fines will more than cover the cost of the patrolman. Regardless of the cost, the speeding is a greater threat to life than a temporarily polluted swim area. Protect the public!!

This is sad. The Town needs to do what it takes to save this beautiful Valley from becoming a dump site!!

There is always people that don't care and leave their garbage everywhere. I wouldn't blame the town if they close these recreation areas to the public. It's too bad, though, that some will spoil it for everyone else. Another thing, if people are caught doing these wrongs, are they punished at all? You never hear that they are.