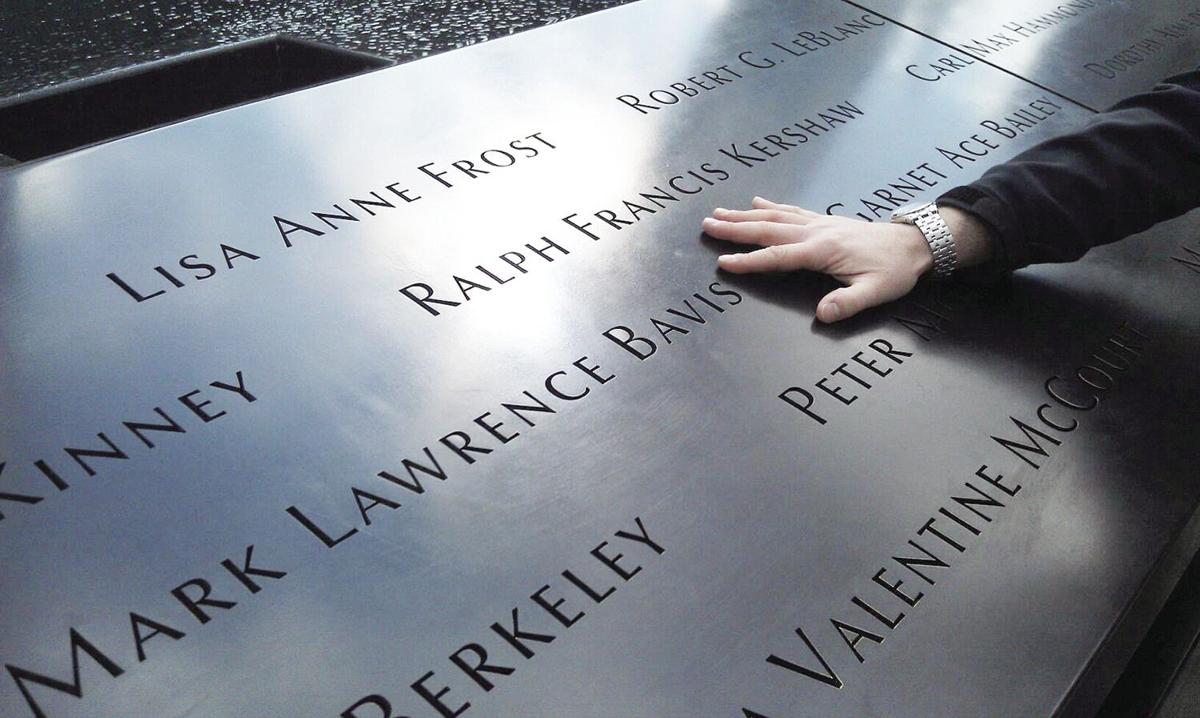 Christopher McNevich visited the 9/11 Memorial in New York and found the names of Manchester Monarch hockey scouts Garnet "Ace" Bailey and Mark Bavis, with whom he had worked. (COURTESY PHOTO) 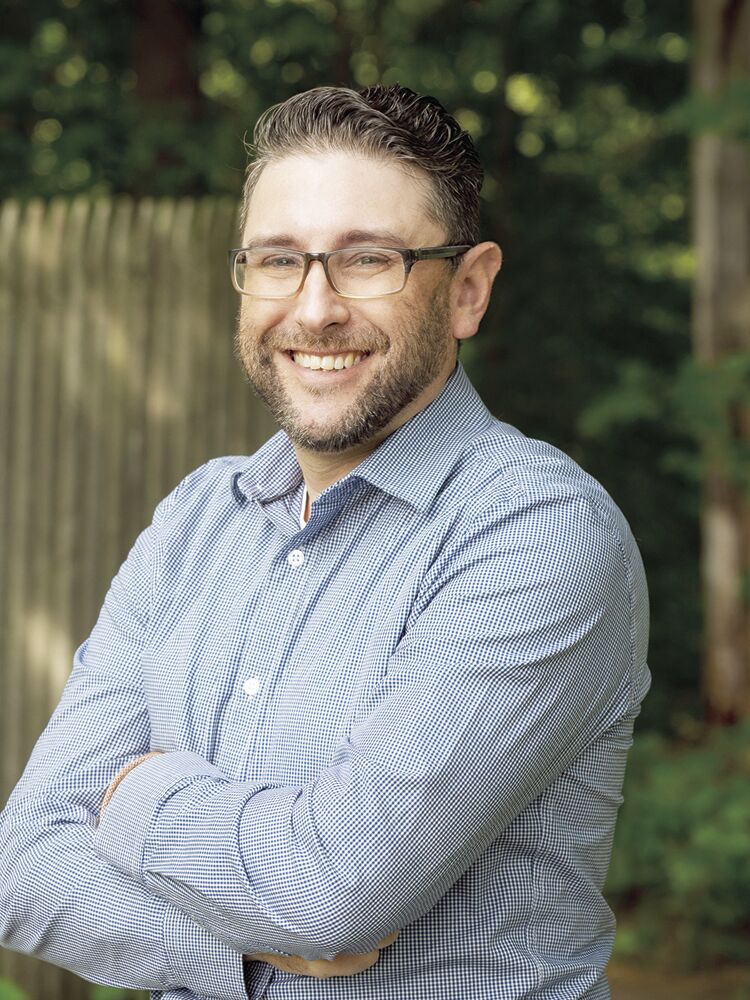 Christopher McNevich grew up in Bartlett and now is a local Realtor. (COURTESY PHOTO)

A photo from the playing of the National Anthem on the 2001 opening night Anthem for the Manchester Monarchs, with Ace and Mark Tribute Ribbon behind the goals. (COURTESY PHOTO) 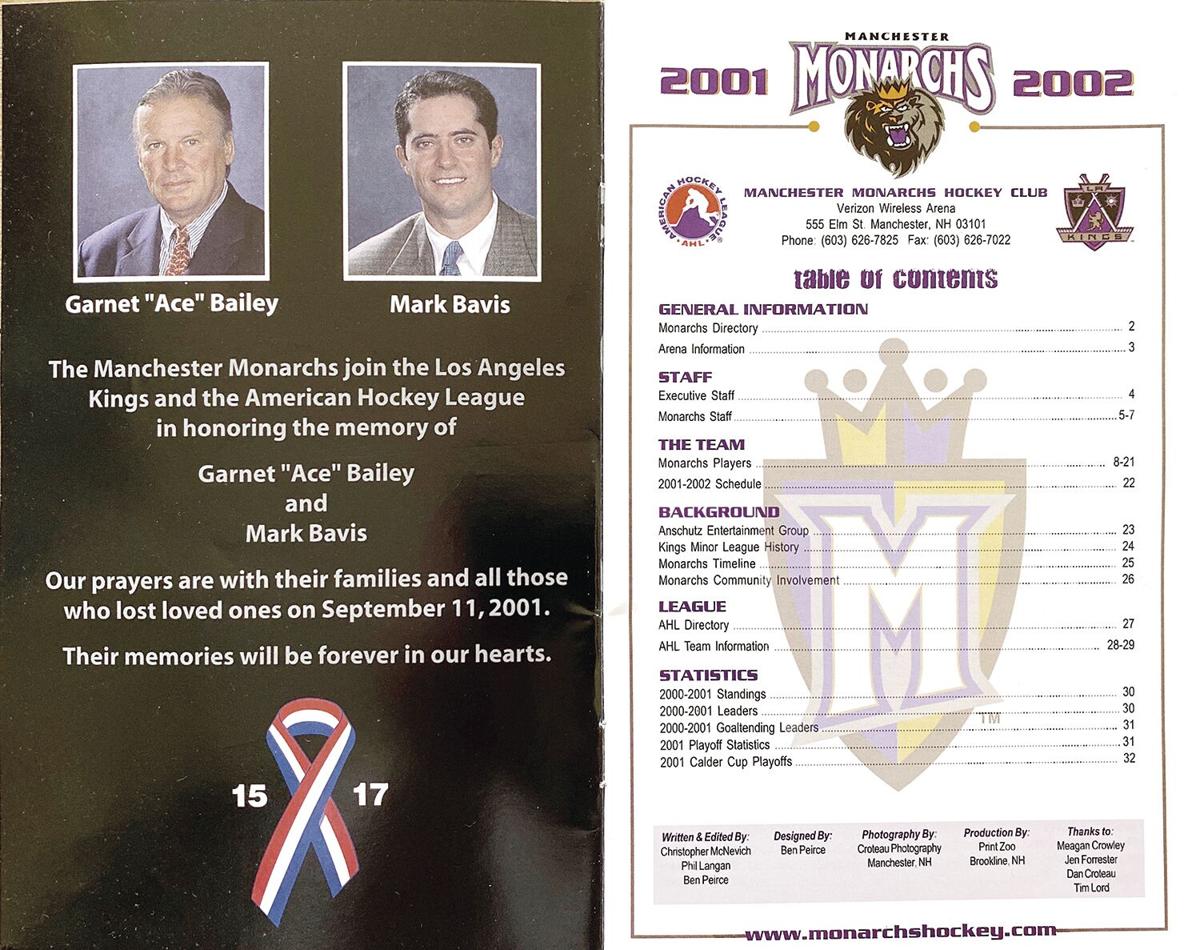 2001 Media Guide that Christopher McNevich wrote with an inside cover tribute to Ace and Mark. (COURTESY PHOTO)

Christopher McNevich visited the 9/11 Memorial in New York and found the names of Manchester Monarch hockey scouts Garnet "Ace" Bailey and Mark Bavis, with whom he had worked. (COURTESY PHOTO)

Christopher McNevich grew up in Bartlett and now is a local Realtor. (COURTESY PHOTO)

A photo from the playing of the National Anthem on the 2001 opening night Anthem for the Manchester Monarchs, with Ace and Mark Tribute Ribbon behind the goals. (COURTESY PHOTO)

2001 Media Guide that Christopher McNevich wrote with an inside cover tribute to Ace and Mark. (COURTESY PHOTO)

BARTLETT — Today, Christopher McNevich, 44, is a Realtor with Keller Williams Lakes & Mountains in Intervale. But 20 years ago, he had just become the Manchester Monarchs' public relations director. Taking that job was almost a fateful decision, he recalls. Below is his story.

"I grew up in the valley. I lived in Bartlett and went to Josiah Bartlett Elementary School, after which I attended Gould Academy in Bethel, Maine, and went on to Plymouth State, where I majored in English.

"Although I never played hockey, I loved the sport, and after graduation in June 2000, I joined the Portland Pirates minor-league hockey organization as a public relations intern. That led to a job in sales with the Manchester Monarchs in August 2000. The president of the Monarchs, Jeff Eisenberg, worked in Portland, and knew I interned there. As a 24-year-old kid, he offered me an amazing opportunity, to be PR director for the Monarchs, which was a new minor-league franchise owned by the Los Angeles Kings.

"As PR director, I was responsible for keeping the stats, making sure players were hooking up with news directors, and that the fans were getting to know them.

"Although the Monarchs, which were eventually taken over by private owners, were disbanded three years ago, at the time, they were the one of the most popular teams in minor-league hockey. In two seasons, from 2003 to 05, they broke North American records for attendance.

"Back in 2001, we were just getting ready for our season at the (then) Verizon Wireless Arena (now SNHU Arena) and the president asked me to join him and Charlie Sherman, the WMUR sportscaster, on a trip to Los Angeles to cover the Kings’ training camp.

"We were in our old office on Elm Street (before moving over to the arena) and I was in told by the president, “Hey, we’re going to cover training camp, Charlie is getting video to send back to WMUR, and you can interview the players (that may be coming to Manchester if they don’t make the Kings team.”

"We were looking at four flights to L.A. One was American Flight 11, and one was United Flight 175, leaving from Boston. The other two were leaving from Manchester.

"The head coach, athletic trainer and equipment manager were leaving on Sept. 10. Our scouts — Garnet "Ace" Bailey was the pro scout, and Mark Bavis was the amateur scout — were taking United Flight 175 on Tuesday, Sept. 11. For some reason, I don’t even remember what it was, the three of us (Eisenberg, Sherman and McNevich) were going out from Manchester on Sept. 12.

"Ace Bailey had played pro for the Bruins in the 1970s. Mark Bavis had played for Boston University. To be honest, I had only met Ace a couple of times. I had dealings with Bavis but I had never met Mark. They were in hockey operations, and we were the front office, business operations. Two entirely different departments. We worked separately, though at times our paths did cross.

"So at the time, I didn’t know when we were setting up the trip which flight they were on.

"I remember getting to work on Sept. 11. I was sitting in the office on Elm Street, I had just gotten in and it was about 8:30, close to the time the first plane hit the World Trade Center. I had just started dating my wife Cara, who was tech head for Auto Fair in Manchester. She called me and said, “Have you seen the news?”

"It came out later in the day that Ace and Mark were on the second flight that got flown into the towers.

"Obviously, I didn't take the Sept. 12 trip to Los Angeles. The Manchester airport was shut down for a while.

"The Monarchs’ opening game was Saturday, Nov. 16, 2001. And our organization — everything they did was top-notch. We had a patch with Ace and Mark’s names on every jersey, both home and away uniforms. A.M. for Ace and Mark. We painted ribbons onto the ice behind the net, and put their initials in the ice. And on opening night, we had a flag that covered the entire sheet of ice held by local first responders, the firefighters and police."

McNevich stayed with the Monarchs until January 2007, then moved back to the Mount Washington Valley, where he worked for the radio station for 11 years, first in sales, then working his way up to executive vice president. That was followed by a stint at the chamber before joining Keller Williams. He and Cara have a daughter Rian, 16, and a son, Cohen, 12. They live in West Ossipee in Windsock Village, the residential fly-in community. He doesn’t own a plane.

Six years ago, he visited the 9/11 Memorial in New York City and found Ace and Mark’s names in the reflecting pool there. He said it’s only recently, when they were watching the National Geographic special, “9/11: One Day in America,” that he told his son about his near-brush with catastrophe on the fateful day of Sept. 11.