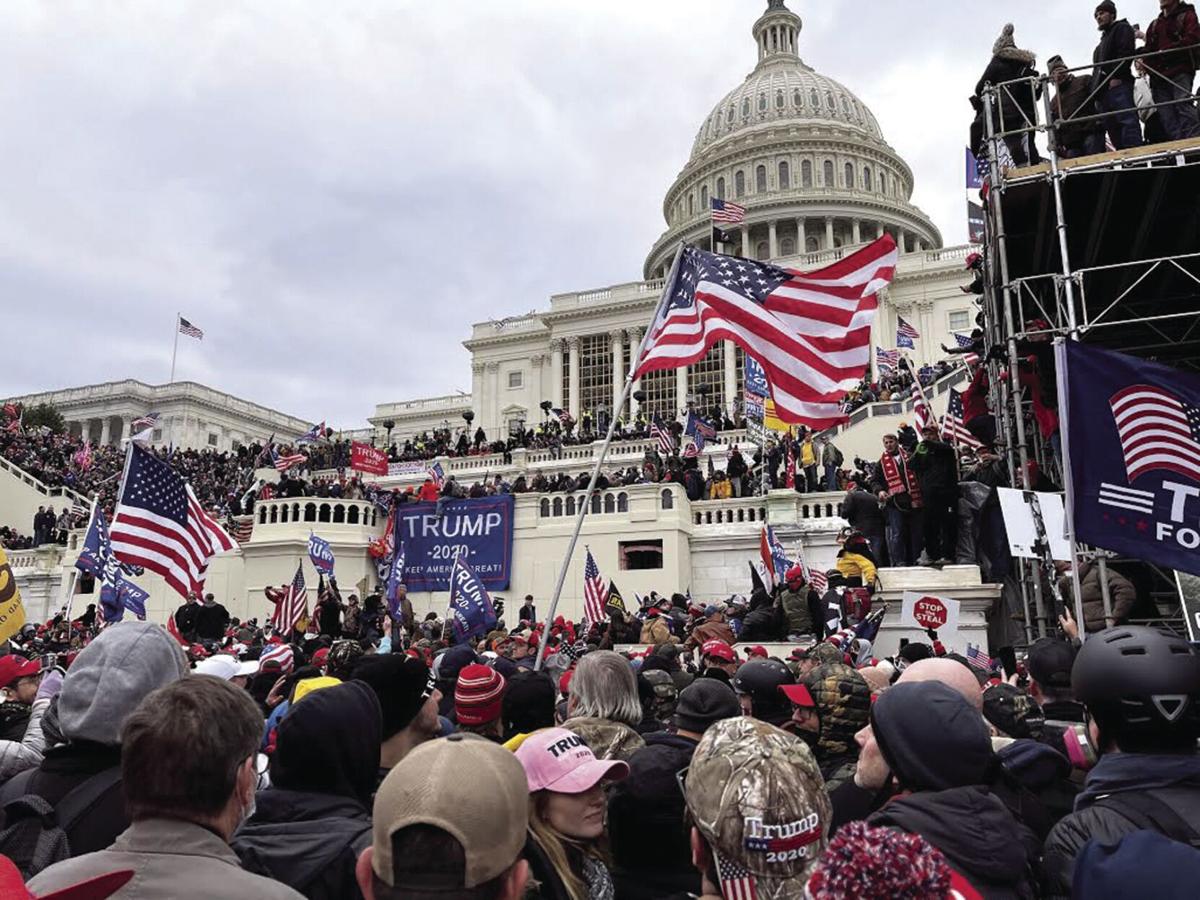 North Conway's Billy Cuccio took this photo in Washington. D.C., where rioters stormed the Capitol building on Wednesday. Cuccio said he was there to peacefully demonstrate for fair elections. (BILLY CUCCIO PHOTO) 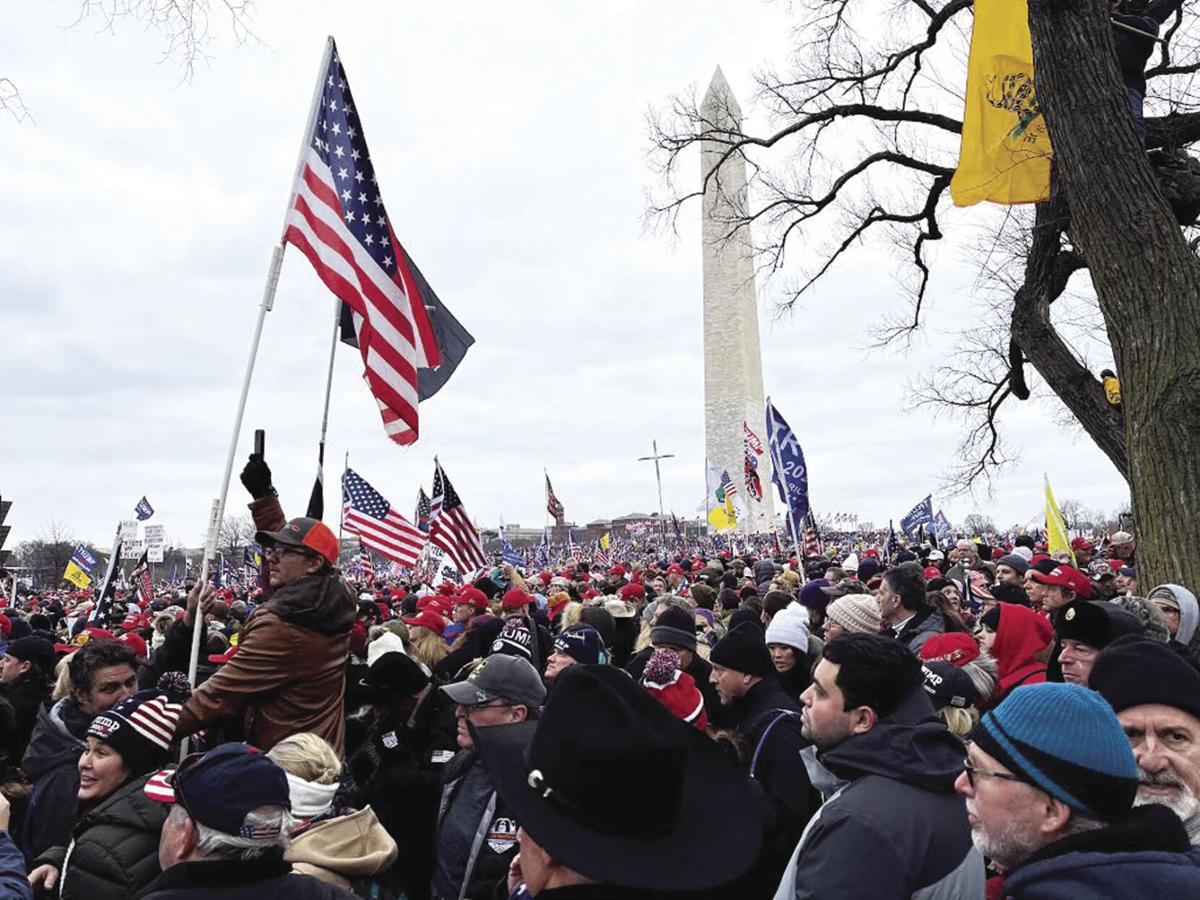 North Conway's Billy Cuccio took this photo in Washington. D.C., where rioters stormed the Capitol building on Wednesday. Cuccio said he was there to peacefully demonstrate for fair elections. (BILLY CUCCIO PHOTO)

WASHINGTON — Several Mount Washington Valley residents traveled to Washington, D.C., to demonstrate their support for President Donald Trump but they condemned the violent protesters who breached and vandalized the Capitol building on Wednesday.

Trump supporter Billy Cuccio, owner of the Lobster Trap Restaurant on West Side Road in North Conway, had hosted Donald Trump Jr. at a campaign rally at his eatery on Sept. 24.

Cuccio said he flew Tuesday from Portland, Maine, where he joined a group of five friends, including a local woman who identified herself as Sherrie, who spoke with the Sun by phone from Dulles International Airport in Washington.

Trump had been encouraging people on social media to come to D.C. to “stop the steal” of the election on Wednesday, a day when Congress and President Mike Pence were set to certify President-elect Joe Biden’s Nov. 3 election victory.

Cuccio said he heard about rally through a website called thedonald.win, which is his go-to site for political news.

“I said, ‘I should go support the president since I felt like he did a lot of good for the country,’” said Cuccio.

Sherrie told the Sun her motivation to go wasn’t simply to stop the certification.

“It was more to protest the fact that they would not allow any of the evidence that there was fraud in the election,” she said.

Cuccio the night before the rally, they did some sightseeing, looking at the monuments around midnight.

“Everything was nice and calm. And then the next day we went down and it was ... like a million people by the Washington Monument,” Cuccio said.

Sherrie said there were people of all ages and ethnicities, that everyone was “very animated” and sought “to have a voice.” She said conservatives have a long list of grievances and many are sick of being labeled with terms like “racist.”

While most were peaceful, “there were definitely some yahoos that had to interject themselves, along with Antifa,” said Sherrie adding that some were wearing their Make America Great Again hats backward. That said, Sherrie believes some rioters were definitely Trump supporters.

“I’m not saying that there weren’t some crazy Trump supporters,” said Sherrie. “There’s crazies everywhere. ... Out of 2-plus million people, we have probably several 100 that were just nutsos ... That’s all it takes.”

Cuccio and Sherrie were among those who heard Trump speak during the “Save America” rally at the Ellipse by the south lawn of the White House, when he said that with around 75 million votes, he received more than any other incumbent president in the history of the country.

Cuccio said it was hard to see Trump from far away, but they could see him on a Jumbotron. Afterward, “we were walking back to the Capitol, and we decided to get something to eat first,” said Cuccio. He said they didn’t see any violence. “So it was pretty calm and kind of a disappointing day.”

Cuccio believes the rioters might have breached the Capitol right around the time Trump’s speech ended, which he thinks was around 1:30 p.m.

“I don’t know what their intentions were, but they weren’t good,” said Cuccio. “I feel like some of them might not have been who they said they were. I think they might have been rabble-rousers.”

It was unfortunate that a woman was shot and killed, said Cuccio, who alleged in September that his property was damaged by protesters when he held the Donald Trump Jr. event. Police investigated and reportedly found no evidence that someone had broken into his home.

Of the Washington protest, he said, “I can see standing outside and chanting, but you shouldn’t be damaging property.”

Asked if he ever felt he was in danger, Cuccio said: “At the Washington Monument, where was it was so packed, I was thinking, ‘Geez, if someone started spraying pepper spray or something into the crowd, people would have panicked and crushed each other.’ There was no place to move.”

Tad Furtado of Conway, who used to work in Washington including being a policy director for then-Congressman Charlie Bass and as a legislative correspondent for U.S. Sen. Paul Coverdell (R-Ga.), said he still owns a home on Capitol Hill.

“A few of my neighbors woke up this morning with notes at their front door with bricks saying things like ‘Shame, Shame, Shame,’” said Furtado.

“There is no indication of what that means or who left them. But the guess is that some of the protesters walked around the Hill neighborhood late at night leaving them.”

Attending the riot in Washington tell me a lot about her Mr. Cuccio.

P.s. Mr. Furtando can tell his friends to be thankful as well, usually notes tied to bricks are found on the inside of broken windows, not quietly placed at the door like a parcel from the post office lol wowsa.

I'm glad Mr. Cuccio and his friends are ok and didn't encounter any of the violence that I and my family watched unfold live on several different new stations and online. My God!

There is no way we can sincerely believe the rioters were anything but hard core Trump fans gone way too far. They carried the Confederate battle flag thru Our People's House! No. Four people are dead. Dead. For what?!?

Those that broke into the Capitol Building, vandalized and robbed The People's House while assaulting Capitol police were not ruffians! They were not bad apples in an otherwise super duper Patriotic sack. No.

They are nothing short of riotous thugs who have committed Treason!! No. There is no excuse.

Real Republicans must stand up now and save the Republican Party.

tRUMP Has ruined this country. So sad how divided he has made us

I find it very disappointing that this paper continues to print statements from people that continue to push untruths. It has been proven by the FBI and other intelligence agencies that there is not and has not been any organization called Antifa. It is a lie created by this administration. So no Sherrie, there are no monsters under your bed.