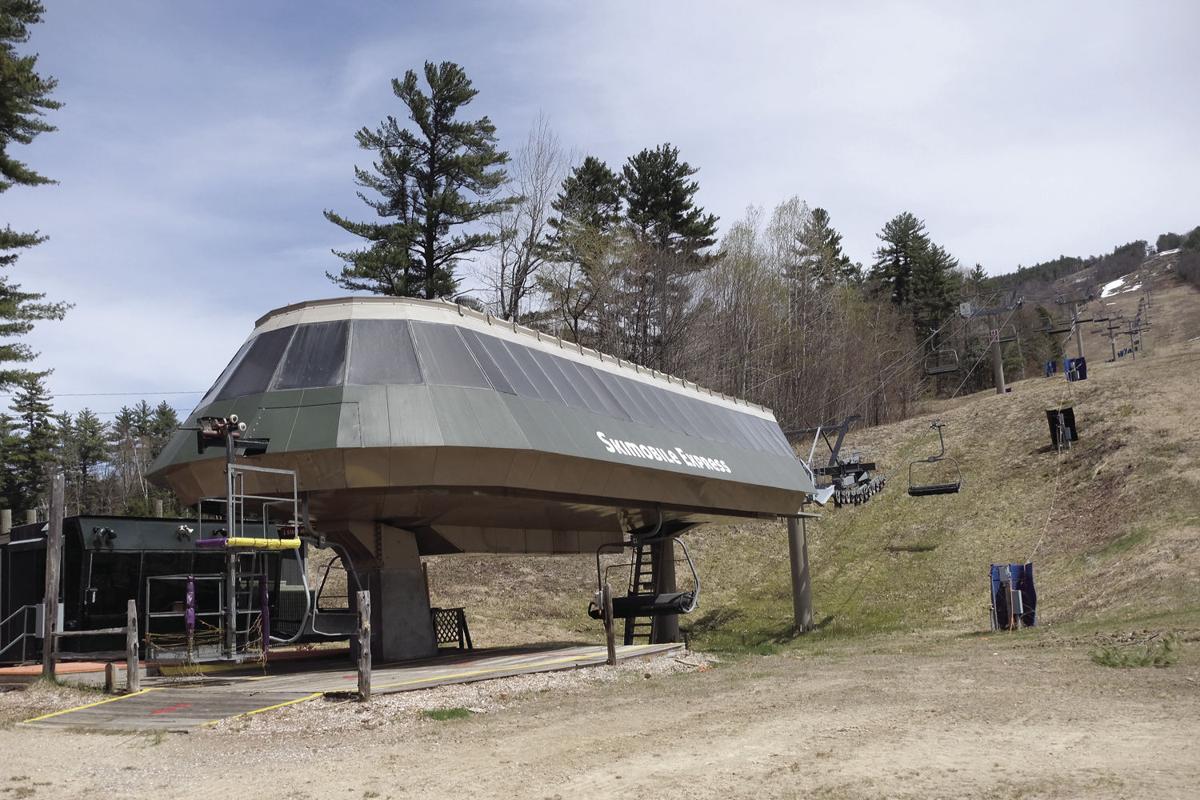 Cranmore Mountain’s Skimobile Express high speed quad chairlift is seen Tuesday. Graduates and families will get a ride up and down the mountain to receive their diplomas. (JAMIE GEMMITI PHOTO) 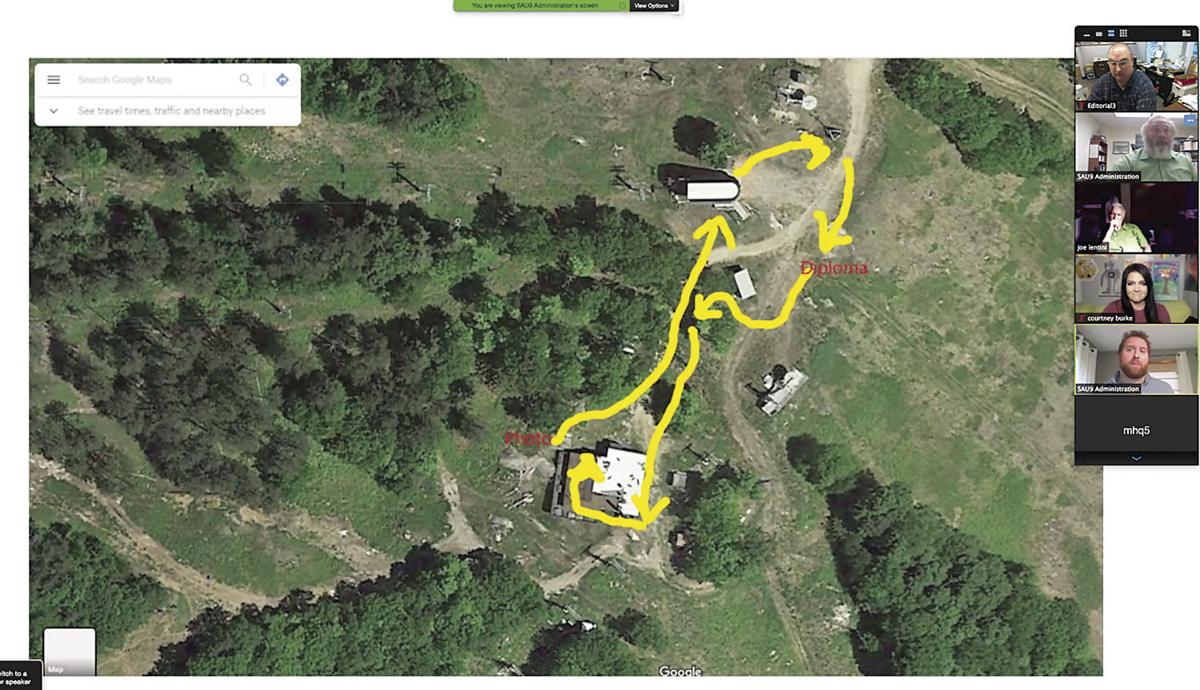 Kennett High Principal Kevin Carpenter (bottom right) shared this overhead view of the top of Mount Cranmore, where graduation for the Class of 2020 and Eagle Academy is planned for June 13, with the Conway School Board on Monday night. (LLOYD JONES PHOTO)

Cranmore Mountain’s Skimobile Express high speed quad chairlift is seen Tuesday. Graduates and families will get a ride up and down the mountain to receive their diplomas. (JAMIE GEMMITI PHOTO)

Kennett High Principal Kevin Carpenter (bottom right) shared this overhead view of the top of Mount Cranmore, where graduation for the Class of 2020 and Eagle Academy is planned for June 13, with the Conway School Board on Monday night. (LLOYD JONES PHOTO)

CONWAY — “It's not a traditional graduation, but I think it's going to be a spectacular one, for sure,” said Kennett High Principal Kevin Carpenter  Monday night as he announced that graduation is still on for June 13.

But it won’t be on the school’s campus at the top of Eagles Way. Instead, the Eagles will graduate from the summit of Mount Cranmore.

At a Zoom-held virtual meeting, the Conway School Board unanimously approved the high-flying idea to hold graduation for the Class of 2020 as well as Eagle Academy students at the North Conway resort.

“I think this might be my favorite thing to vote 'yes' on ever,” said board member Jessica Whitelaw.

Carpenter said he had met with the graduation committee, sharing the idea with some parents and students, and “overwhelmingly, people were ecstatic about this.

“There's so many people doing the virtual graduation ceremony or the drive-up, and you get handed a diploma thrown into the car," said Carpenter.

“I think we're putting together something that's going to be outstanding. It's going be neat, it’s going represent the Mount Washington Valley, and Cranmore has come on board with us."

Carpenter said Ben Wilcox, president and general manager of Cranmore and a 1982 KHS graduate, "has been phenomenal. The Fairbanks (family that owns the resort) have been phenomenal. They're looking for zero dollars from us, they're not looking to charge us anything. They want to be part of doing something special for our kids."

Superintendent Kevin Richard is proud of all of the work that went into this plan.

"There’s still a lot of work to do but it will be very important for the community to help us make this a success for the kids," he said.

He called it "not replicating graduation but reimagining that graduation."

He added: “The seniors have given up a lot."

Richard said the idea of using Cranmore as a possible graduation site came from Rich Stimpson of Bartlett, whose daughter Sophie is a senior at Kennett.

“Pam (Stimpson, director special services for SAU 9, wife to Rich and mom to Sophie) brought up the idea,” he said. “I brought it to Kevin Carpenter. (Assistant Superintendent) Kadie (Wilson) and I talked about it, and it had some legs. Then we got the approval (from state Sen. Jed Bradley, Education Commissioner Frank Edelblut and Gov. Chris Sununu). The commissioner said, ‘This a good idea,’ he really liked it."

Getting into brass tacks, graduation will span two days, Carpenter said. It will begin the evening of Friday, June 12, with a broadcast on Valley Vision (Channel 1301) and online of the traditional speeches and announcements of awards typically presented at graduation ceremonies.

The following day, Cranmore will take center stage (with a rain date of June 14).

Graduates, in alphabetical order, with their guests, will ride the Skimobile Express quad chairlift up the mountain. They will stop at the east bowl with spectacular views of Peaked and Middle mountains, where the graduate will be announced by Carpenter, be presented their diploma, have a photograph taken and be acknowledged by Richard and Conway School Board Chairman Joe Lentini and then proceed to the Meister Hut, where another photo will be taken on the ledges, with Mount Chocorua, the Moats and Mount Washington as a backdrop. Then the group will head back down the mountain.

“It looks like it would be about a 30-minute round trip — about 10 minutes up the mountain, from station to station, roughly about 10 minutes to the time you get back on the chairlift, and then 10 minutes down,” Carpenter said.

“Which we feel really good about because it's not just, ‘Oh, I showed up there, I got the diploma, and then I left.’ This is going to be an experience for them.”

Richard said there will be holding areas on the mountain for groups arriving and departing. He envisions fewer than five groups at a place at any one time.

“We’ll have groups spaced out pretty well,” he said. "That’s why we’re looking at six or seven hours for the ceremony."

“It was probably the best meeting I've had in a long time,” he said.

“It’s going to be gorgeous,” Schrader said by phone Tuesday. “It’s the perfect setting; it begs to be used.”

She added: “The response we’ve gotten from other people has been amazing. Everyone is doing virtual graduation, we wanted to do something special for this class. I think we can give them a day they’ll never forget.”

“I think that this is very creative,” he said, “and it's admirable for the committee to come up with this.

"I've been watching Channel 9 (WMUR), and other districts have come up with plans like I saw one using a drive-in theater. But knowing that we live in snow country, I think it's great. And even if we did have inclement weather — the way we're going, if it snowed, it would probably be pretty creative.

"I think that the committee that came up with this plan — it's a pretty amazing plan. I think it’s great.”

Lentini agreed, saying, "This is brilliant."

Board member Courtney Burke added: “I just want to tell you that I'm an emotional person, and reading this the other night when it came through on my email, I broke down into an incredible amount of tears. And again, tonight, I have a niece that's graduating and a nephew who would be graduating through Eagle Academy.”

“Eagle Academy is going to be part of this ceremony,” Carpenter said.

“I'm gonna cry again,” replied Burke. “It's just phenomenal, absolutely phenomenal. Not surprised by this community, but this is just amazing, too good for words.”