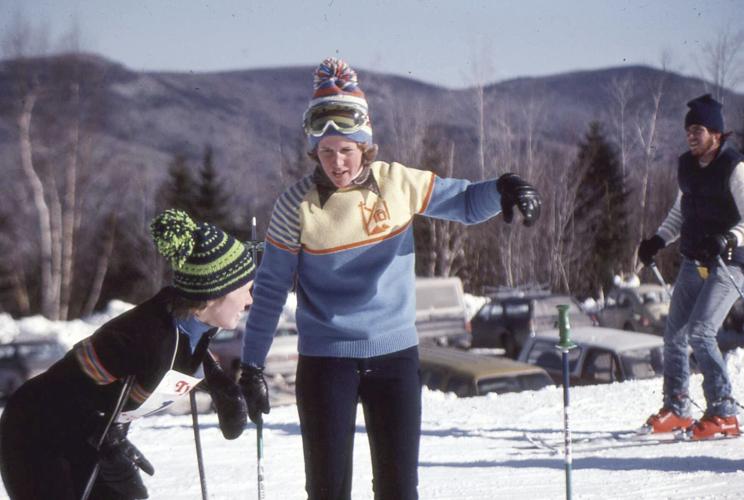 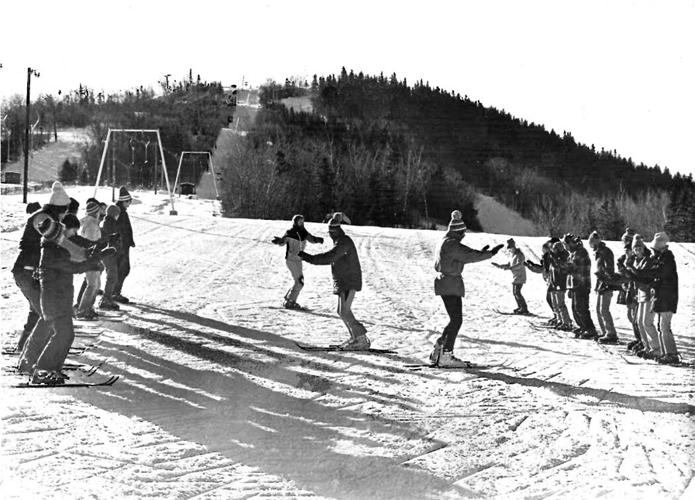 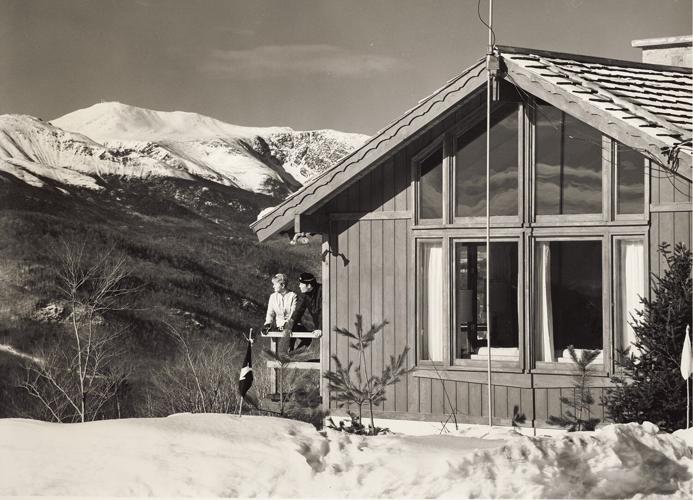 The Tyrol Ski Area was built by Tyrol’s then owner Murray Dearborn in conjunction with a real estate development on the site of the old Thorn Mountain slopes. (DICK SMITH/NESM PHOTO) 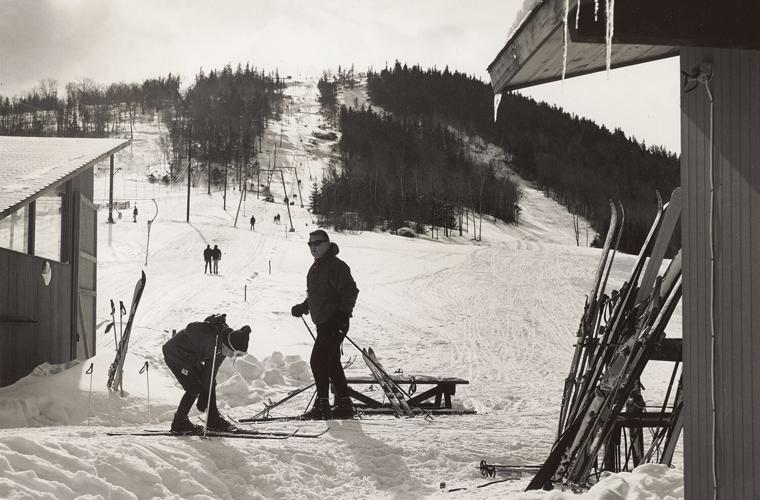 Skiers get ready for another run at Jackson’s Tyrol Ski Area in this undated photo. (DICK SMITH/NESM PHOTO) 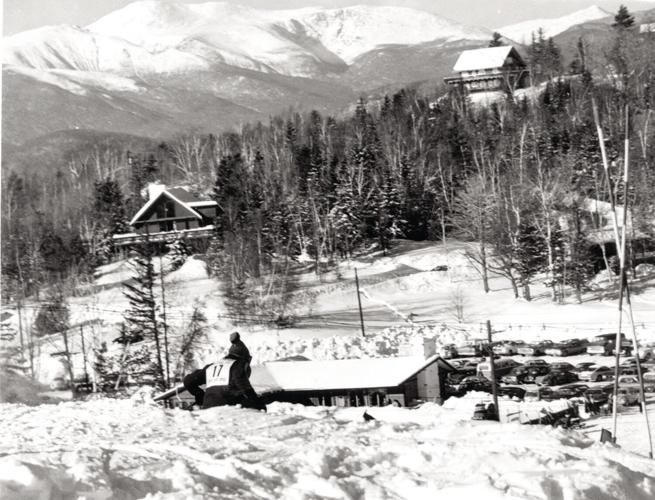 The Tyrol Ski Area was built by Tyrol’s then owner Murray Dearborn in conjunction with a real estate development on the site of the old Thorn Mountain slopes. (DICK SMITH/NESM PHOTO)

Skiers get ready for another run at Jackson’s Tyrol Ski Area in this undated photo. (DICK SMITH/NESM PHOTO)

JACKSON — The mountain hamlet of Jackson has long been a skiing center, with a rope tow opening at then Moody’s Farm (now Black Mountain) in 1935 and Carroll P. Reed establishing his ski school in what is now the Wildcat Tavern in December 1936.

Ski trails were also cut on Doublehead Mountain, overlooking Black Mountain. The Civilian Conservation Corps built the Wildcat Trail in 1933, and Wildcat Mountain opened on the White Mountain National Forest in 1958. It is now owned by Vail Resorts, along with nearby Attitash in Bartlett.

As recorded in Jeremy Davis’ New England Lost Ski Areas Project (nelsap.org) and by the New England Ski Museum in Franconia and North Conway, Jackson also was home to Thorn Mountain, Tyrol and Spruce Mountain, as well as rope tows behind the Eagle Mountain House and the Iron Mountain House (now site of the Red Fox Pub & Grille) as well as Omer Gile’s south of the Dana Place on the right heading north on Route 16.

The Jackson Ski Touring Foundation, founded in 1972, is still going strong, always a leading force in the push for Nordic skiing.

Jeff Leich, retiring executive director of the New England Ski Museum, wrote an article, “Vanished from the Land: The Lost Ski Areas of New England,” for the museum’s fall 2008 journal about Thorn Mountain (1949-56) and its neighbor, Tyrol (1965-1981).

A current exhibit at the Franconia museum depicts much of that history.

Thorn and Tyrol were doomed by  lack of snowmaking, among other factors. Thorn, Leich wrote, may have had the shortest lifespan of any New England ski area, closing after just seven seasons, but its location was attractive, above the ski village of Jackson.

“Tyrol was constructed on the same mountain, higher up than Thorn had been, with an associated real estate development on the old slopes of Thorn,” Leich wrote,

In spring of 1963, Leeland Realty of Lexington, Mass., purchased 1,000 acres in Jackson, including Thorn.

Whereas the Thorn Mountain ski area was located on the west side of the ridge, Tyrol would be on the north and northeast slopes. One tagline read, “How would you like to own your own chalet in an Alpine-like village?”

A 2,200-foot-long Mueller T-bar was installed at Tyrol in late 1964, serving about 500 vertical feet. The area officially opened on Jan. 23, 1965, with Department of Resources and Economic Development Commissioner John Rowe presiding.

A Poma lift was added adjacent to the T-bar for the 1965-66 season, providing novice skiers with an easier uphill option. Trails rushed for 1964-65 were smoothed and seeded. Operating into mid-April, business doubled as compared to the freshman season. Business increased an additional 30 percent with the 1966-67 season.

The area was greatly expanded with the installation of a double chairlift for 1968-69, increasing the advertised vertical drop to 1,000 feet when the lift debuted later in the season.

As Leich writes, the new chair “extended from a point well below the base lodge (now home to Judy Holmes and Jim Progin) to the summit, creating an area in which the base area was situated essentially in the middle of the vertical rise.”

Banding together with Attitash, Black, Cranmore and Wildcat, Tyrol and its fellow Eastern Slope areas offered an interchangeable weekday lift ticket package called The Big One.

The 1969-70 season reportedly saw three new trails and lodging improvements. Though a future plan called for a 6,000-foot gondola to Jackson, the proposal never came to fruition.

Unfortunately, financial woes were building. The area was foreclosed on in late 1971. Dearborn shifted his focus toward West Virginia, taking over Canaan Valley Resort for a decade starting in 1971-72. Dearborn also operated Snowshoe for a period during the 1970s.

Former valley resident Tony Ferruolo — later a co-owner of the Red Parka Steakhouse and Pub and now of Gilford — told the Sun his group bought Tyrol at the 1971 foreclosure.

“I was running Black at the time. Three of us from Black — Gibb Porath, Chuck Hoyt and I — teamed up with Dick Badger, John Keeney, Roger Cameron, Ron Lombardi and Egil Stigum — and bought it from Littleton Savings Bank. It had some good runs but it wasn’t about steeps; it was a fun place,” Ferruolo recalled.

“We did a lot of innovative things, such as selling two-hour tickets at a time when areas only sold all-day or afternoon tickets. We used to not groom the lift lines in the morning so people could get in some powder runs early,” he said.

During Ferruolo’s group’s ownership, Ben Williams ran the ski school. The Red Parka Challenge Cup — always one of the top amateur races in the region and perhaps the nation’s oldest dual GS — began there as the Tuborg Classic in 1973.

It also hosted some memorably zany events such as the Sun, Sin & Snow Circus (a poster from that infamous event remains on display at the Red Parka today).

One of the competitors of the first race to be called the Red Parka Challenge Cup in 1974 was now Democratic state Rep. Chris McAleer of Jackson.

“I remember Dewey (Mark, RPP co-owner) and Tony (Ferruolo) on the hill that day with Tony running the show. I think it was Matt Gile who won the race; not sure who was second but I ended up third overall. Perhaps one of the Garland brothers (of Bartlett) was second. I hope there are records or somebody else remembers as I would love to know. It was an open field at the time with no age or ability divisions. I do not recall if any women raced but there was no separate women’s category. A sign of the times. At any rate first through third place were treated like royalty by the Parka.”

Kathleen Harrison Totten, now of Stratham, remembers it as a fun area, noting, “It was a wonderful small ski area where everyone was family and a great place for beginners to learn. We had such fun talking to southerners who came to Tyrol to learn to ski. Whether is was racing through gates or carving turns, it was always about the fun.”

Ingrid Carlson DeWitt, on FB posted skiing and Tyrol swimming races segments taken of the family by her and brother Christian’s late father Charlie Carlson, which brought the viewer back to the days of TV’s “The Brady Bunch.”).

Heather Lovell Klaudt: The Sun, Sin and Snow Circus. The B.A.T. girls won, of course! I loved teaching skiing there. They let me teach the Cannabis Sativa method as an experiment (really!). Apres-ski with Tia Maria White Russians. Then off we went to work the Shovel Handle all night. Great Times!!! Thanks for bringing up the Tyrol memories.

Bob Nelson: Forgetting when the bowl lift closed and walking back up to the lodge.

Christian Carlson: Just trying to hang on The Big T-bar! Steep and icy towards the top with a sideways slant. Also, skiing off the top ledge behind the ski patrol shack on the West side all the way down to town. With just a little bushwhacking.

Joan Wrigley: I lived across the parking lot in a chalet and got my phone calls at the Tyrol bar.

Maureen Shannon: Oh wow I loved Tyrol. You could buy a ticket for a two-hour period. The crazy bar was fantastic rustic yet full of life.

Pete Rivers: I don’t remember skiing but my parents, Joe and Evelyn Rivers used to take us to the Labor Day fireman’s chicken barbecue.

Sarah Sullivan-Mallett: My uncle Brian was dating my aunt Eileen back then and they skied with me at Tyrol on weekends and après-ski at Oak Lee Lodge after. So much fun!

Jim Wilfong: The skiing was not memorable but saying hi to Ben Willams over a beer was fun!

David T. Cianciolo: Fun place for learning how to file and use your edges, and clearly, the most insane apres skiing in the valley which began the moment you pulled into the parking lot ...

Beth Carta-Dolan: I skied my whole life ... but, the winter I skied on the Tyrol race team was the winter I became a skier ... that’s the winter I gained my confidence and realized how much I just loved to ski! I still miss those tight trails and steeps!

Tyrol made regional headlines again in 1988, when then-owner Walter B. Preble III was arrested for importing over 12.5 tons of Jamaican, Colombian, and South Carolinian marijuana into New Hampshire, following a two year investigation kicked off by then Barlett police chief Robert Snow. According to press accounts, Preble bragged to associates that he had purchased the ski area with gains from his drug business.

Later that year, Preble pleaded guilty and was sentenced to prison. Christopher Wallenstein Auctionworld Inc. was commissioned by the state of New Hampshire to sell the 220-acre former ski area. Progin and Holmes purchased Tyrol at the Dec. 10, 1988, auction and announced he had no commercial intentions for the property.

The trail network has become largely overgrown in subsequent decades, as Progin and Holmes maintained it as their mountain retreat, closing it to the public in October 2020 due to misuse by trespassers. And now, they are offering the 207-acre property for sale.