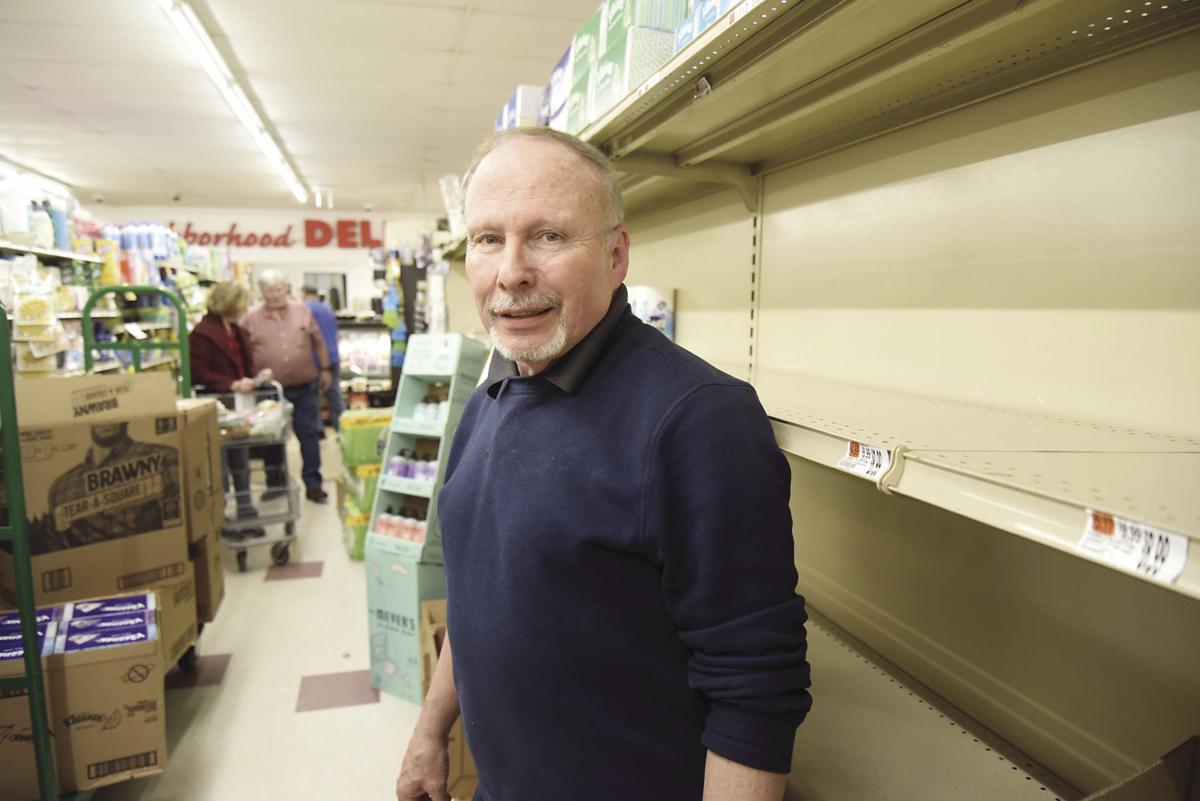 Grant’s Shop’n Save manager Paul McGonagle is seen in the paper products aisle of the store in Glen Wednesday. (JAMIE GEMMITI PHOTO) 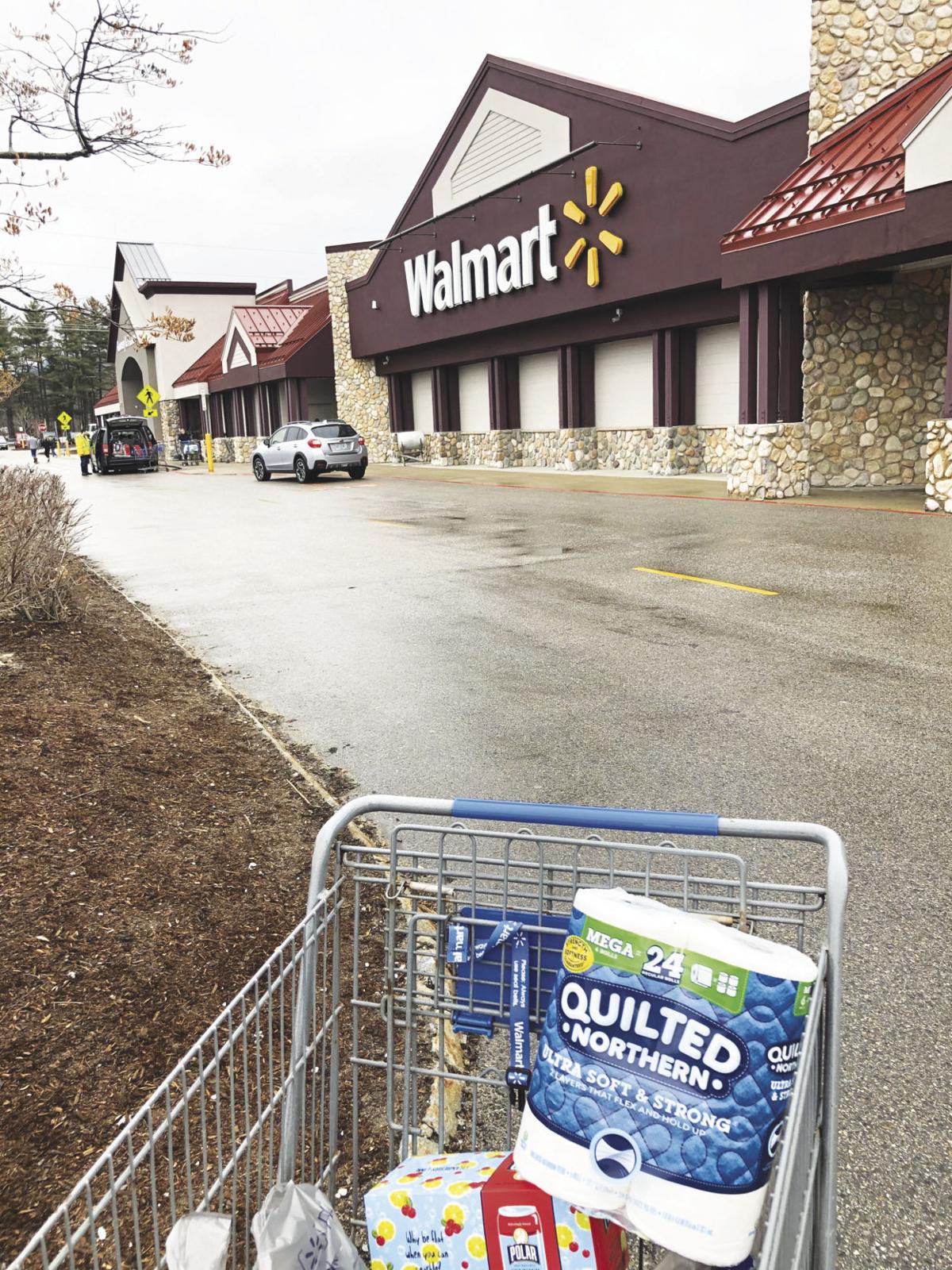 Walmart did have toilet paper Thursday morning but customers quickly bought out the supply. A limit of one four-pack per customer was in effect, according to a store employee. )TOM EASTMAN PHOTO)

Grant’s Shop’n Save manager Paul McGonagle is seen in the paper products aisle of the store in Glen Wednesday. (JAMIE GEMMITI PHOTO)

Walmart did have toilet paper Thursday morning but customers quickly bought out the supply. A limit of one four-pack per customer was in effect, according to a store employee. )TOM EASTMAN PHOTO)

CONWAY — From trying to restock quickly disappearing items such as toilet paper and hand sanitizer to instituting special hours for senior citizens, local grocery stores are working overtime to address the issues brought on by the worldwide coronavirus outbreak.

One takeaway: Stop hoarding and leave some for others. Another is a new concept: special shopping hours for senior citizens. According to the Centers for Disease Control, those over 60 and with health issues are at a special risk for developing dangerous side effects of the virus.

Walmart announced Thursday that each Tuesday from 6-7 a.m. it would hold "seniors only" hours for those age 60 and up at its North Conway store. A spokesman later said those hours may be expanded.

Ericka Dodge, manager of external communications for Hannaford, issued a statement to the press Wednesday:

“You are correct that there has been an increased interest in certain products like toilet paper. For high-demand products, there may be a purchase limit. We are working as quickly as possible to replenish specific high-demand items.

“The food supply chain in the United States is healthy, so this is not a supply issue," she said. "It’s just that we are seeing unprecedented demand nationwide. The challenge is getting product delivered and on store shelves at a speed that matches this extraordinary demand.

"We’re working closely with our suppliers to provide our customers with the products they need. We’re also searching widely for new sources of supplies. It is important for all of us at this time to be mindful of other customers who also have needs. To that end, we encourage customers to purchase what they need and leave some for others."

In Glen, Grant's Shop ’n Save Manager Paul McGonagle said his store has instituted seniors shopping hours for Sundays, Tuesdays and Thursdays from 8:30 to 10 a.m.

“Those are our non-load mornings," he said, adding, "I would be awfully afraid of someone coming in and falling otherwise, as we were doing the (product) unloading."

McGonagle said Thursday afternoon that "we started this morning. We got some in but not a lot as this was our first."

As with other stores, toilet paper was in short supply. Grant's got some in Thursday morning, but it was gone in 15 minutes, McGonagle said,

“We are getting another load for tomorrow, but I can’t guess what we will get. My son (Corey McGonagle) works for Hannaford in Concord, and he said they were wiped out. So, it’s everywhere.”

McGonagle said his store’s customers tend to shop daily and buy small quantities, but this scare has seen that change as people have been buying for the possibility they may be forced to self-quarantine without having enough food in the house.

“We’re selling selling a heck of a lot of product. It’s at the more busy summer level, no question,’ said McGonagle, who noted that his staff of 40 employees (including 15 full-timers) are working like "it's battle stations" every day.

“Several of us are working seven days a week, and we’re exhausted,” is how he put it. “But we know what we have to do and that is to serve our customers."

To keep the store restocked is a constant challenge, McGonagle said. "We're trying to get the loads up in a timely fashion and out there for our customers. The problem is trying to keep up with the product.”

He said Grant's, which gets many products from Hannaford, is part of a three-store independent affiliate owned by Daniel Craffey, with other stores in Gray, Maine (Shop 'n Save) and Wolfeboro (Hunter's).

"Hannaford is so overwhelmed, they cannot give out extra loads (of items such as toilet paper and hand sanitizers),” said McGonagle, who says he has been in the grocery business for 52 years and has never seen anything like the current situation.

“This is battle stations; everyone is ready to go every morning,” he said.

McGonagle said there is plenty of produce and canned goods, and although chicken ran out earlier in the week, there was plenty to be seen on Thursday morning,

One new trend is: “People have offered to do shopping for people,” said McGonagle.

“We shopped this morning, for example, for a couple in their 70s. They emailed their order and waited in the parking lot, and we shopped for them. We scanned his credit card and loaded the stuff in his car, and off he went.”

Efforts to get comments from Shaw’s and Walmart were unsuccessful as of presstime but FOX News reported Wednesday that Walmart shoppers should expect limits on certain items, including paper products, milk, eggs, cleaning supplies, hand sanitizer, water, diapers, wipes, formula and baby food.