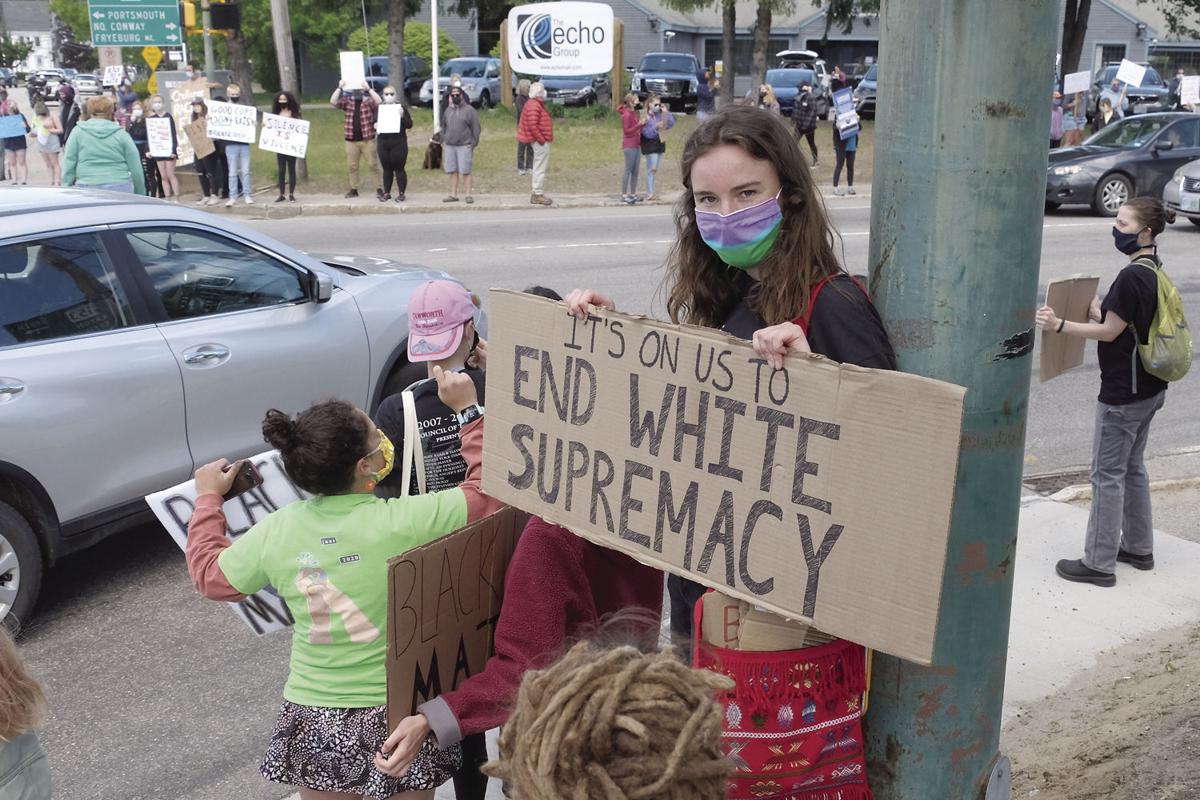 Fiona Davis-Walsh of Albany (center) holds up a sign in Conway Village at the Black Lives Matter protest that she helped organize Sunday. (JAMIE GEMMITI PHOTO) 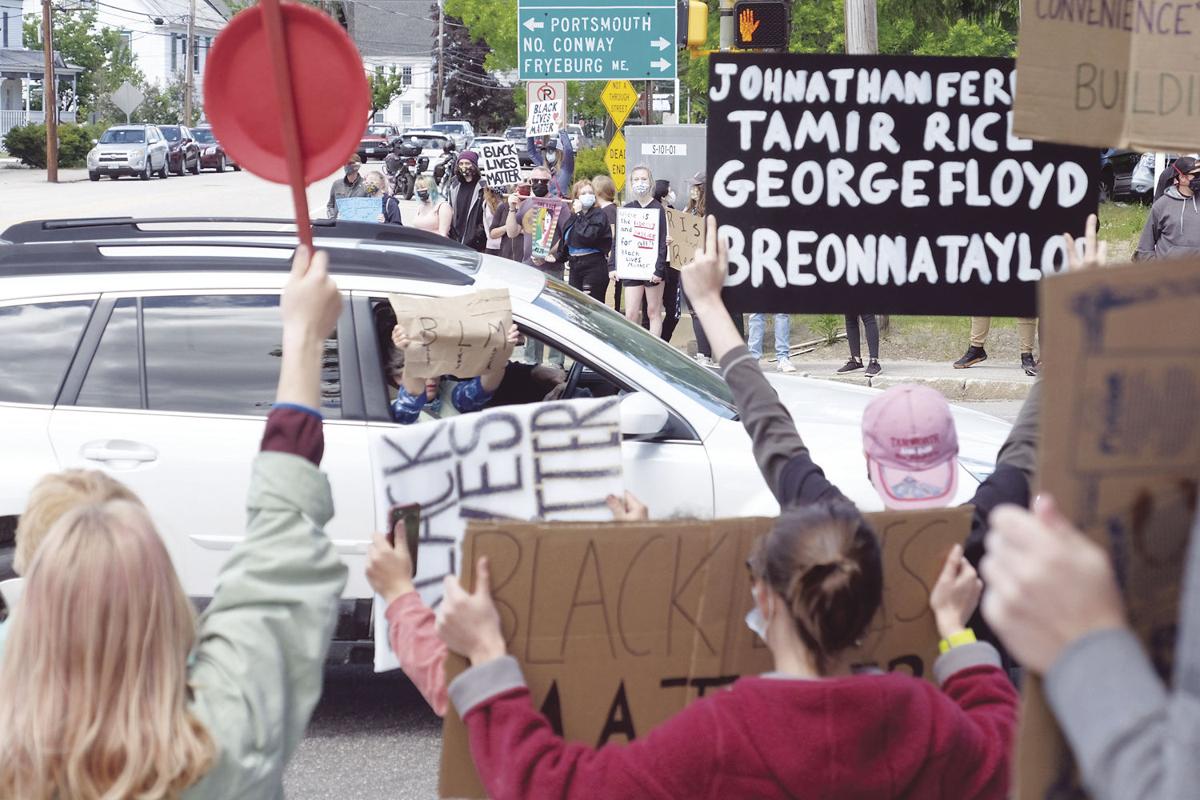 A passenger in a car holds up a sign in solidarity with the “Black Lives Matter” demonstrators that took over the Four Corners of Conway Village on Sunday afternoon. (JAMIE GEMMITI PHOTO) 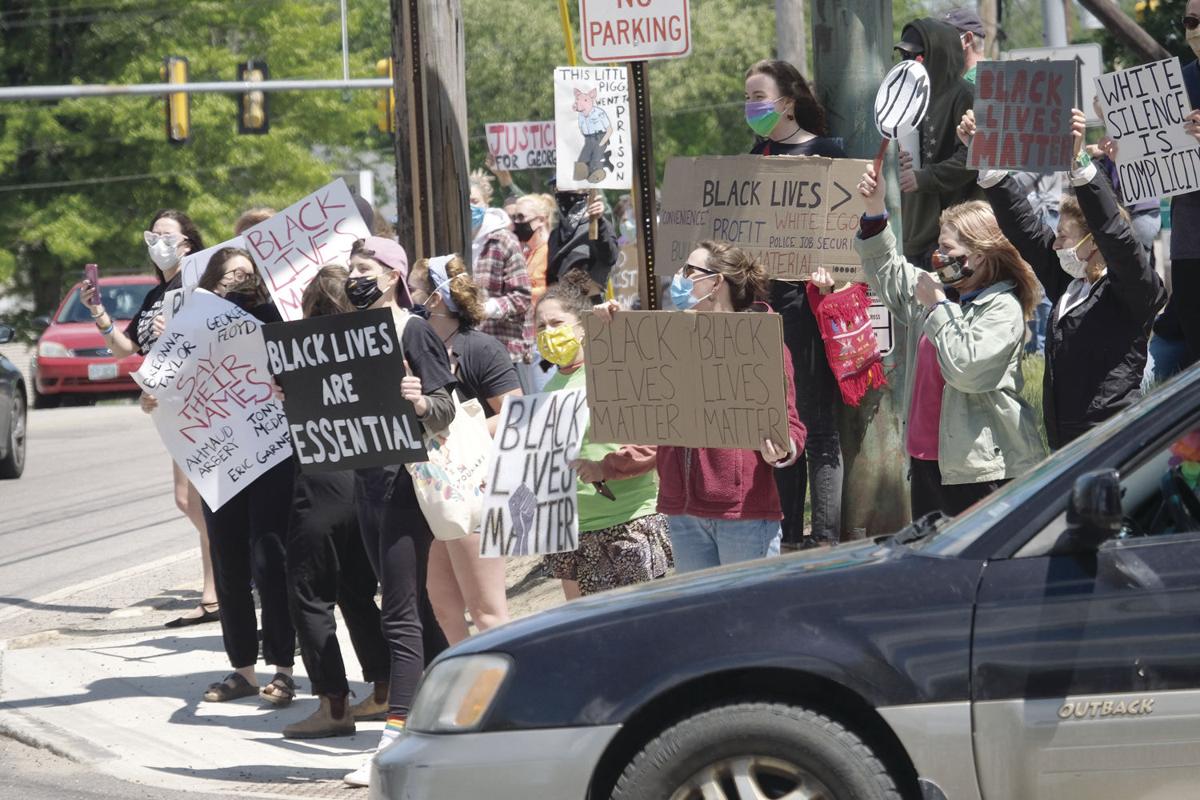 Fiona Davis-Walsh of Albany (center) holds up a sign in Conway Village at the Black Lives Matter protest that she helped organize Sunday. (JAMIE GEMMITI PHOTO)

A passenger in a car holds up a sign in solidarity with the “Black Lives Matter” demonstrators that took over the Four Corners of Conway Village on Sunday afternoon. (JAMIE GEMMITI PHOTO)

CONWAY — A “Black Lives Matter” demonstration Sunday at Conway Village’s Four Corners drew more than 200 participants, making it one of the largest protests there in recent memory.

It came amid protests nationwide and even across the globe over the death while in custody of 46-year-old George Floyd, an African-American.

Across New Hampshire, protests also took place in Berlin and Manchester, among other cities.

A white Minneapolis police officer was videotaped kneeling on Floyd’s neck for nine minutes while he was lying facedown and handcuffed. The officer, Derek Chauvin, was initially fired following the May 25 incident and has since been charged with third-degree murder and second-degree manslaughter.

The local arrest of Jean Ronald Saint Preux, 34, of Albany, who was pulled out of his car during a traffic stop by state troopers, also was addressed at Sunday’s protest, which Saint Preux attended.

Of Saint Preux’s arrest, the state Attorney General’s Office said Monday it would conduct “an independent and comprehensive review” to ensure that the conduct of New Hampshire State Troopers Margaret Ready and Hawley Rae “conformed with the law.”

One protester, Katy Robarts of Conway, said seeing how Saint Preux was treated in a video that went viral on the internet led her to attend the demonstration. “I’m enraged and I can’t sit still and not say something any longer,” she said.

Jackie Sparks of Conway said she is distressed “by the racism that continues in this country.”

Kevin Flynn of Conway said it is important for people to show “that we’re fed up with the way things are going in this country.”

“We’re a very very white community,” Flynn said. “It’s hard to even know what racism is up here, but it happens here.”

Sunday’s demonstration, which started at 1 p.m. and lasted several hours, was organized by Fiona Davis-Walsh of Albany, Molly and Willa Canfield of Tamworth, and River Hayes of Jackson.

Davis-Walsh said racism in this country is becoming more and more visible. “Because of internet and social media, (white people) seem to be realizing that it’s their problem, too, and trying to find ways to leverage their privilege and get involved.”

In terms of protests at the Four Corners, “this is definitely the biggest one I remember,” said Davis-Walsh’s father, Andy Davis, a well-known activist, along with his wife, Andrea Walsh, both of Albany.

Walsh added that, age-wise, the protest was “the youngest demonstration that the Four Corners has ever seen.”

At the protest, almost all the participants wore masks to prevent the spread of COVID-19, and were socially distanced on both sides of Route 16.

High school student Selena McCarthy of Albany said: “As a woman of color — my mother is from Costa Rica — I feel that it’s very important to stop police brutality and racism. I truly believe that things should be changed in the United States and that people should change their minds about racism because you’re not born racist; it’s taught and it can change.”

Davis said the killing of Floyd comes after COVID-19 “laid bare” the disparity in resources between black and white Americans. “I think that explains a lot of what’s happening in terms of the outpouring of grief and sadness and rage in the country as a whole. And why we had a particularly good turnout in Conway yesterday.”

Davis-Walsh said the protesters came from a driving-distance radius of about an hour away, including Sandwich to the south and Berlin to the north. People from Massachusetts and New York who were passing by also participated.

Davis-Walsh said there were no issues: “It was very peaceful, as we expected.” The crowd got encouragement from passing motorists, she said.

“It was overwhelmingly positive,” said Davis-Walsh, though she added: “There were some people that revved their engines in a pretty negative-seeming way and some people that flipped us off.”

Conway Police Lt. Chris Mattei confirmed to the Sun there were no issues, and he wished to thank the protesters for staying on the sidewalks and demonstrating peacefully.

Asked if Conway police would be changing any of their procedures, Mattei said police already have “extensive training and procedures” in place, to handle “any kind of arrest.”