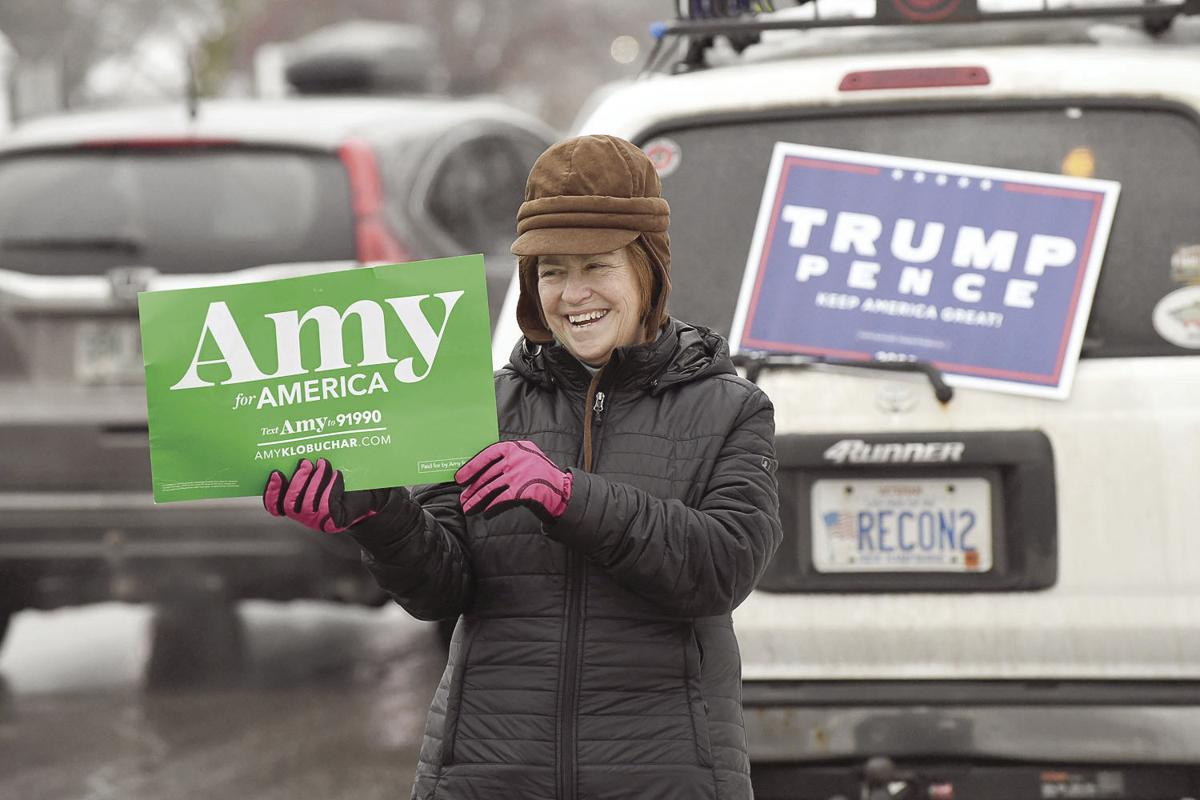 Nancy Kellogg of Bridgton, Maine, holds a signs to support her favorite candidate on Route 16 near the entrance to Conway Elementary School during the primary election Tuesday. (JAMIE GEMMITI PHOTO) 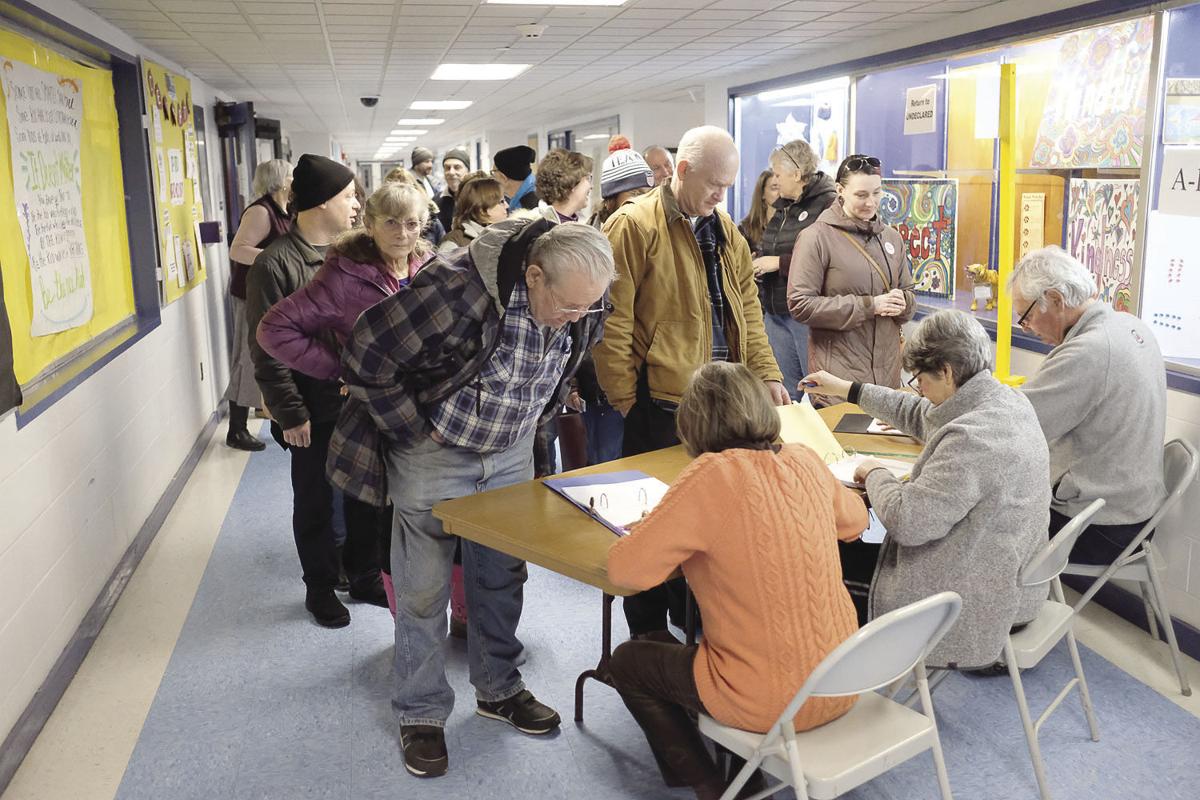 Conway voters wait in line to switch back to undeclared after voting in the primary election at the polls at Conway Elementary School Tuesday. (JAMIE GEMMITI PHOTO) 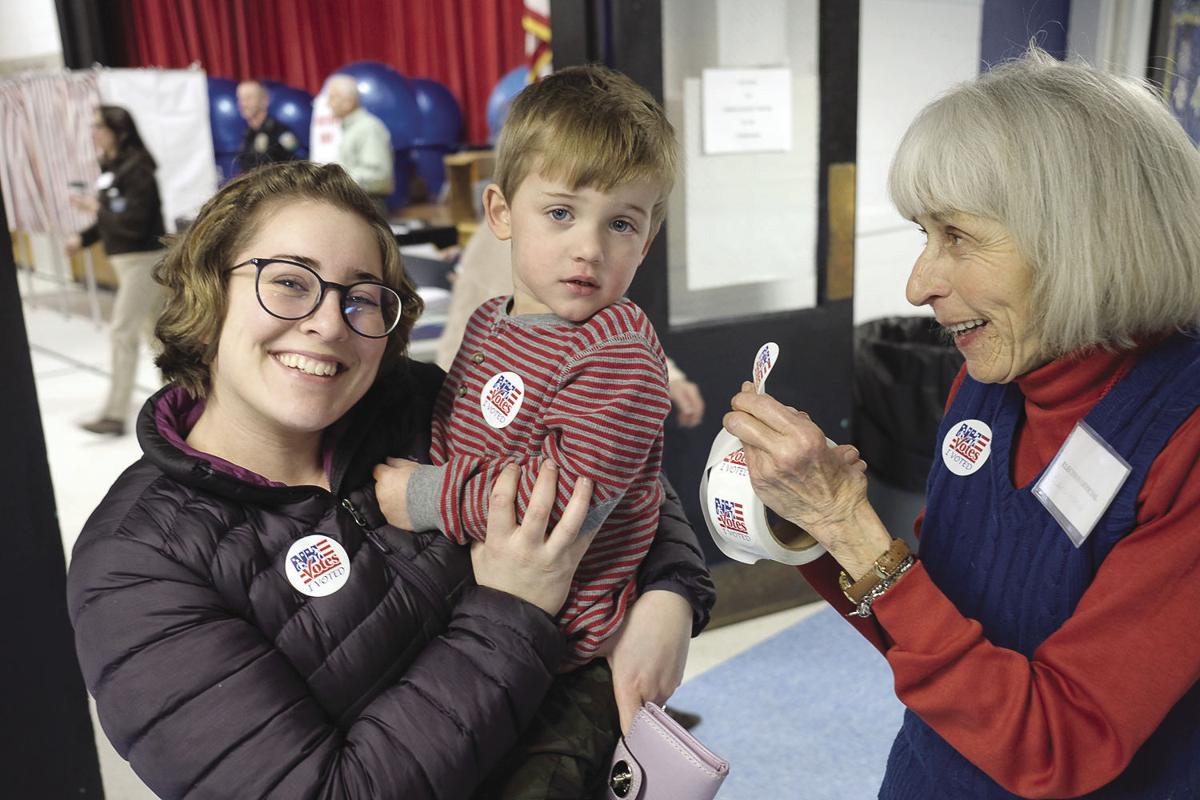 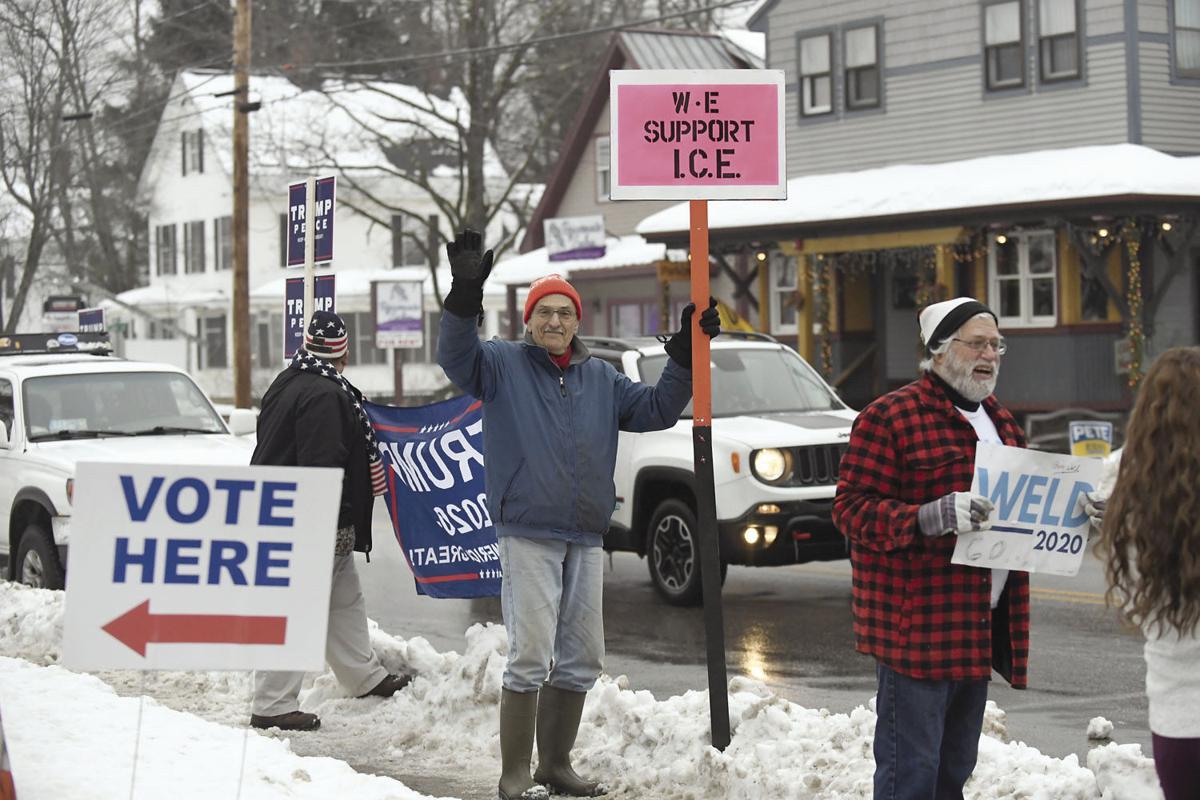 Nancy Kellogg of Bridgton, Maine, holds a signs to support her favorite candidate on Route 16 near the entrance to Conway Elementary School during the primary election Tuesday. (JAMIE GEMMITI PHOTO)

Conway voters wait in line to switch back to undeclared after voting in the primary election at the polls at Conway Elementary School Tuesday. (JAMIE GEMMITI PHOTO)

CONWAY — Vermont Sen. Bernie Sanders once again carried Conway in the first-in-the-nation Democratic Primary, just as he did in 2016, but it was close, as there was a much lower turnout than predicted.

Oh, and traffic was a hot topic at the polls in Conway Village on Tuesday.

On the Republican ballot, President Donald Trump got 637 votes, or 21 percent of the total vote), while former Massachusetts Gov. Bill Weld got 70 (2 percent).

“I am a numbers guy,” The Washington Post quoted Yang as saying Tuesday night before he spoke to supporters at The Puritan Backroom in Manchester. “In most of these (upcoming) states, I’m not going to be at a threshold where I get delegates, which makes sticking around not necessarily helpful or productive in terms of furthering the goals of this campaign.”

Bennet, who held more than 50 town hall meetings around New Hampshire, said, “It’s fitting for us to end the campaign tonight. I love you, New Hampshire. Whether you knew it or not, we were having a great time together.”

Warren reached out to her supporters at 8:35 p.m. “Results are still coming in from across the state, but right now it is clear that Senator Sanders and Mayor Buttigieg had strong nights. And I also want to congratulate my friend and colleague Amy Klobuchar for showing just how wrong the pundits can be when they count a woman out.

“But since we’re here tonight among family and friends, I also want us to be honest with ourselves as Democrats: we might be headed for another one of those long primary fights that last for months."

In Conway in 2016, Sanders nearly doubled the tally of former Secretary of State Hillary Clinton, 1,175 to 609 in the primary.

"It was less than I expected," she said of the turnout.

She said inside the building, things went well. She said the parking worked out alright. "It sounds as though voters were reporting trouble with traffic, getting to the polls," said Fauver.

In 2016, 300 absentee ballots were cast in Conway. Tuesday, 220 were received by Conway Town Clerk Louise Inkell.

Biden, who finished fourth in Iowa, wasn’t overly excited about his chances in the Granite State. In fact, he canceled his primary plans to attend a party in Nashua on Monday night and headed to South Carolina.

Selectmen Carl Thibodeau and David Weathers spent the day at the polls in Conway. They, like Fauver, thought there would be a stronger turnout.

“Steady but light is how I’d describe it,” Weathers said while directing traffic at 6:35 p.m. in the parking lot. “We’re probably only getting 150 cars an hour.”

"I think a lot of Republicans chose not to vote because it was a given Trump would be the nominee,” Thibodeau said inside the polls. “I think in a lot of cases, if you were a Republican and came within a mile or two of Conway Elementary, then you did your civic duty and voted. If you weren’t in the neighborhood, why bother, many probably thought.”

Joe Mosca, who helped at the polls, said he sat in traffic for 20 minutes on East Main Street by the Conway Humane Society, less than a mile from the school at 4 p.m.

Asked about the traffic, Lt. Chris Mattei said that he thought the issue may have been people slowing down to look at the campaigners holding signs on the sidewalk of Route 16.

He added: “I think this is a good place for a primary and a town election. In November, we’re going to be looking at 5,000 voters, that needs to be at the high school.”

Sanders and Buttigieg had been predicted by political pundits to do well here, but Klobuchar may have made her mark in New Hampshire

"We feel the surge, for me, it's been a long time coming," an energized Klobuchar told a crowd at Keene State College on Monday, the eve of the primary.

There were no problems reported at any of the election sites around the state.

Secretary of State Gardner is fond of saying, “You can’t hack a pencil.”

“We’ve kept it simple,” he said in an interview last week with NHPR. “I’ve always preached that the more moving parts that you have in the election process, the more room there is for something to not function right.”

Tuesday was time the town of Bartlett went to a voting machine to tabulate results.

“(Town Clerk) Cheryl Nealley was instrumental in convincing the select board that it was time for this and her plea swayed them enough to place it on the ballot at last year’s town meeting vote and it passed overwhelmingly,” said Town Moderator Norman Head. “To thank her for her work on this, I as moderator afforded her the privilege of casting the first ballot at 8 a.m.”

“It’s been interesting,” said Selectman Vicki Garland. “A lot of people have asking if it shreds the ballots."