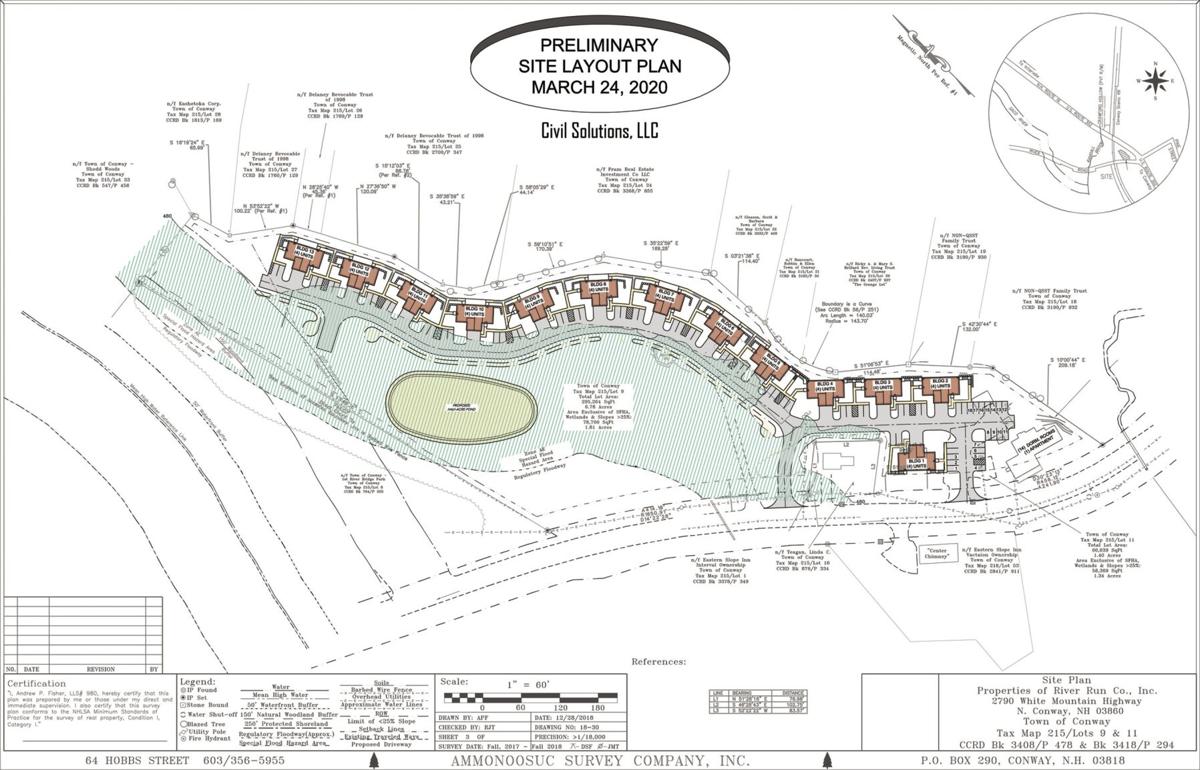 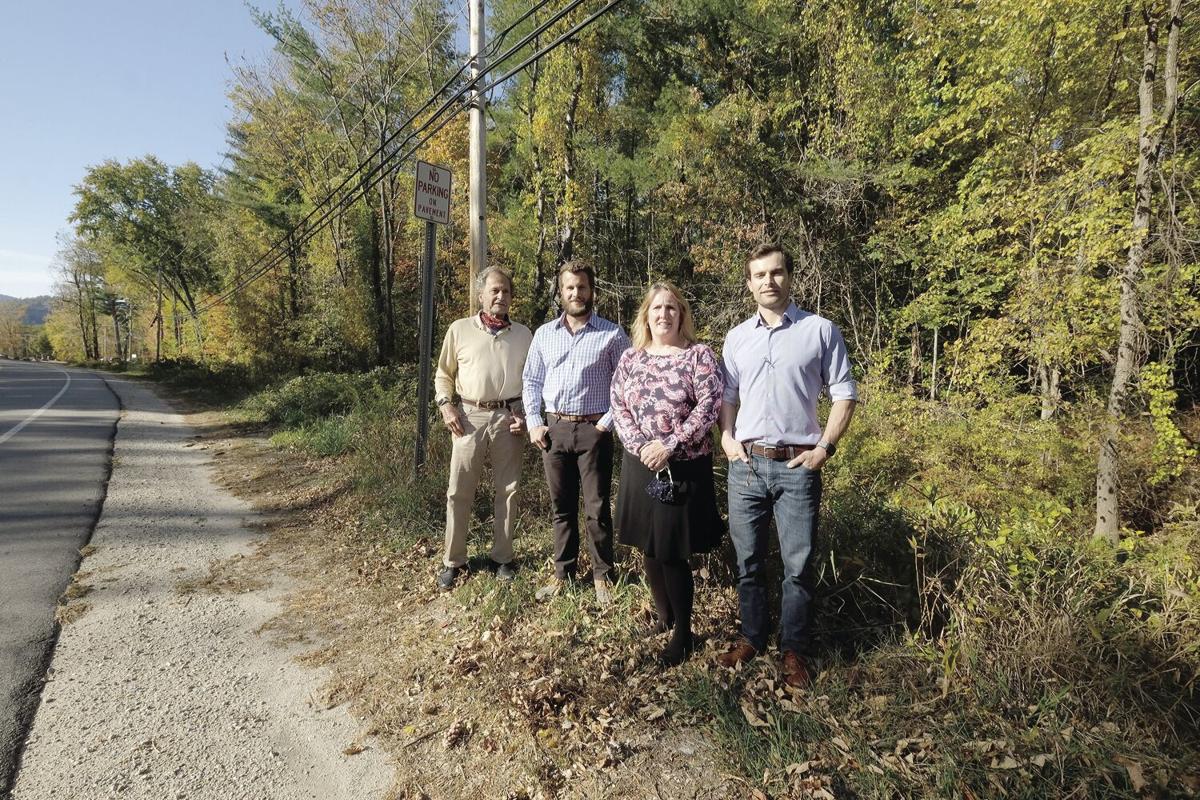 The approved development will be behind the tree line along the road and is designed to be out of sight from the traffic. The project management team from left are: Joe Berry, Ace Tarberry, Sheila Duane and Alec Tarberry. (JAMIE GEMMITI PHOTO)

The approved development will be behind the tree line along the road and is designed to be out of sight from the traffic. The project management team from left are: Joe Berry, Ace Tarberry, Sheila Duane and Alec Tarberry. (JAMIE GEMMITI PHOTO)

CONWAY — A 54-unit, 13-building housing development proposed by River Run Company and located near the Nereledge Inn in North Conway has gotten a preliminary thumbs up by the Planning Board.

If approved, construction will start next year. Fourteen of the units, or 25 percent of the total, is dedicated to workforce housing.

The complex will be located between the train trestle on River Road and First Bridge on the Saco River.

Each of the 13 buildings would contain four units consisting of a mix of rental apartments and condominiums.

As envisioned, the lower floors of the building would be for studio workforce rental units, possibly with a one-bedroom unit as well, with two- and three-bedroom units on the second floor extending to the third floor.

It seeks greater development density by setting aside 25 percent of the units for workforce housing, which would be part of the deed for 20 years under the terms of a zoning amendment passed by voters in 2003.

A project must be served by municipal water and sewer as well to get that density. The proposed site would be hooked up to both, say developers Joe Berry and sons Alec and Ace Tarberry and project manager Sheila Duane all of River Run, owners of several nearby properties to the project, including the Eastern Slope Inn.

According to project engineer Burr Phillips of Civil Solutions LLC of Bartlett, who also attended Thursday’s presentation, River Run received five special exceptions from the Conway Zoning Board of Adjustment May 20, including one to allow the increased density of up to 12 units per acre. (The rest were related to parking and drainage/utility work within the floodplain).

In a followup interview this week, Phillips noted that portions of the parking lot/access drive would be in the floodplain but that the 13 buildings would not.

“Based on the eight-plus-acre lot, the special exception would allow for up to 98 units but the proposal is for only 54 since we did not want to force too many units into too small of space,” Phillips explained.

At last Thursday’s meeting, Berry said he wanted to meet with the board to generally introduce the project for conceptual overview to answer questions before they get to a formal site-plan review this coming winter.

“I think Joe mostly wanted to introduce the project so the board was not surprised later, and also gain their initial feedback,” said Phillips, concurring with Town Planning Director Tom Irving and Berry’s explanation to board members at the start of the meeting.

If all goes according to plan and once approvals are received, Berry told board members he hopes for construction to start on the first phases in 2021.

He said the project is partly intended to help local workforce housing and to give developers some flexibility how to address that need in marketplace conditions.

“We all know there is a housing shortage in the valley,” said Berry, adding, “Our goal is to have this be an asset for the community (and) not a blemish. How are we going to do that (fit 13 buildings on the site)? We are going to be able to do that because we have eight acres and most of it will be left natural.”

River Run also owns the Nereledge Inn, across from the Center Chimney Inn, which it currently uses as a dormitory-like structure with a common kitchen and bedrooms for employees. It also has one apartment.

The apartment and eight dorm rooms count as two of the units in the 54-unit proposal, Phillips explained.

Key to the proposal are the eight acres behind a two-bedroom home adjacent to the Nereledge Inn that the company acquired two years ago after its owner died.

“About two years ago,” Berry explained, “we purchased the two-bedroom house and the eight acres that went with it. We have been following closely what’s been going on in the valley in terms of housing and the need for housing and we feel this eight-acre parcel would handle very comfortably a 13-building project.”

In his presentation, Berry said of the 13 buildings, the two that would be constructed closest to the Center Chimney Inn would be built to resemble that building’s architecture because they would all be visible from River Road so they would complement one another in appearance. He added, “We plan to leave a thick buffer of trees along River Road, so as to lessen the visibility of these buildings from the road and help maintain the existing rural atmosphere of this area.”

Asked by board members Ben Colbath and Earl Sires (son of former town manager Earl Sires) about how many of the units would be dedicated to workforce housing, Alec Tarberry explained how the density special exception would apply.

“So, Plan A is to put 25 percent of the units in their own buildings so all those apartments would be with each other, in the two buildings that will look like the Center Chimney Inn that Joe referenced across the street,” said Tarberry, whose brother Ace Tarberry also works for the company.

Tarberry added, “The alternative which we may do is to build these (13) buildings and dedicate one of the four units in each building as a workforce apartment.”

He said they have the option if the market is good in keeping some of the condos and simply renting them out as apartments.

“As you guys know,” he said, “building construction costs are very challenging right now so this gives us the flexibility. But basically a minimum of 13 apartments but possibly more.”

In addition to the Eastern Slope Inn, Berry is involved with several other ventures in the Mount Washington Valley, including the Oxen Yoke and many storefronts and rental units in North Conway Village as well as Attitash Mountain Village and Attitash Mountain Realty in Bartlett.

Seems like "JoeTown" just keeps on getting bigger. River Road is so overrun now with summer tourists (each year worse than the one before) so I can only imagine adding to that traffic snarl with multiple buildings/parking lots. And building in a floodplain?! Oh not the buildings, just the parking area and the driveway, well okay, that's not a problem. The whole project seems environmentally detrimental especially given the close proximity of the Saco River...ahh, 5 special exceptions from the zoning board...no surprise there. Then there is the matter of 25% being allotted for workforce housing which is nothing more than a tokenism (pathetic at best).

How much will it cost to rent a workforce unit? Who are the "workforce"? Just trying to figure out if it will help out, we do need some cheaper housing.

14 units for workforce and 40 units for AirBnB. Just what the valley needs.

If you wanted to do something different with it , you should have bought it. Joe Berry and his sons own the land they should be able to do whatever they want. As a business owner on West side road I’m excited about their project and wish them the best of luck!