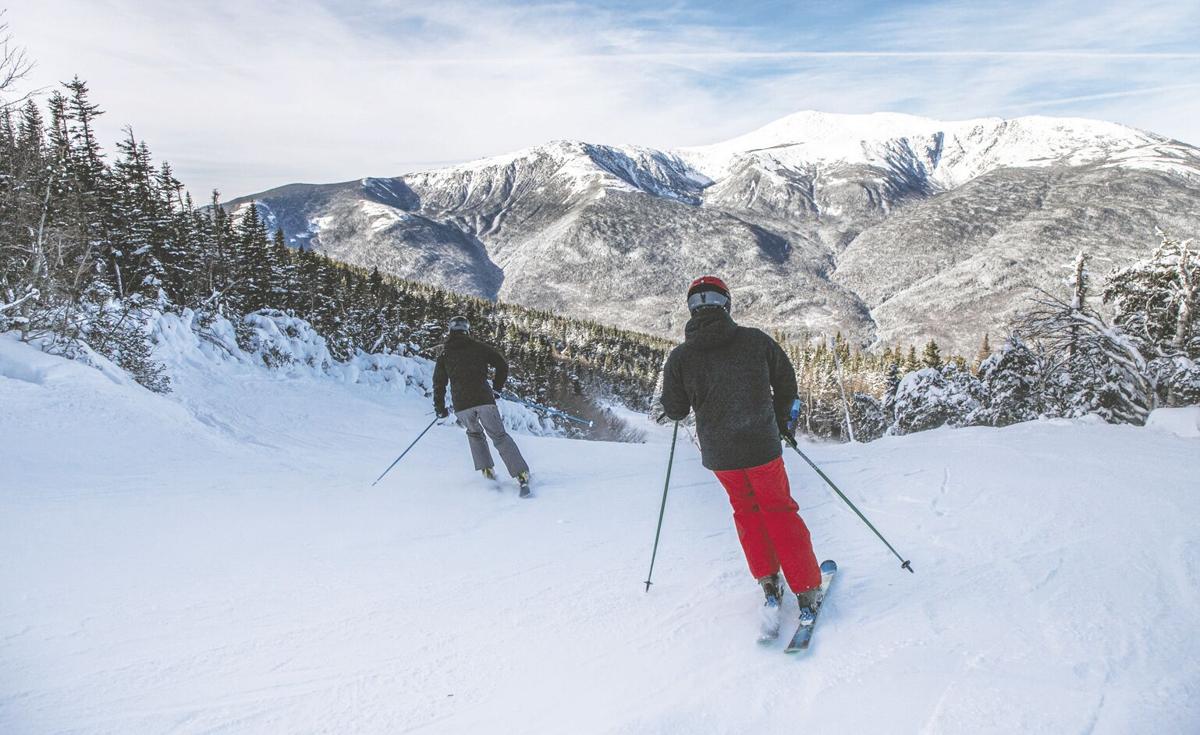 Vail Resorts Inc., owner of Attitash and Wildcat (shown here), had a rough start to the ski season, reporting a net loss of $153.8 million for the first quarter of its current fiscal year, mainly due to the effects of the COVID-19 pandemic. (WILDCAT PHOTO) 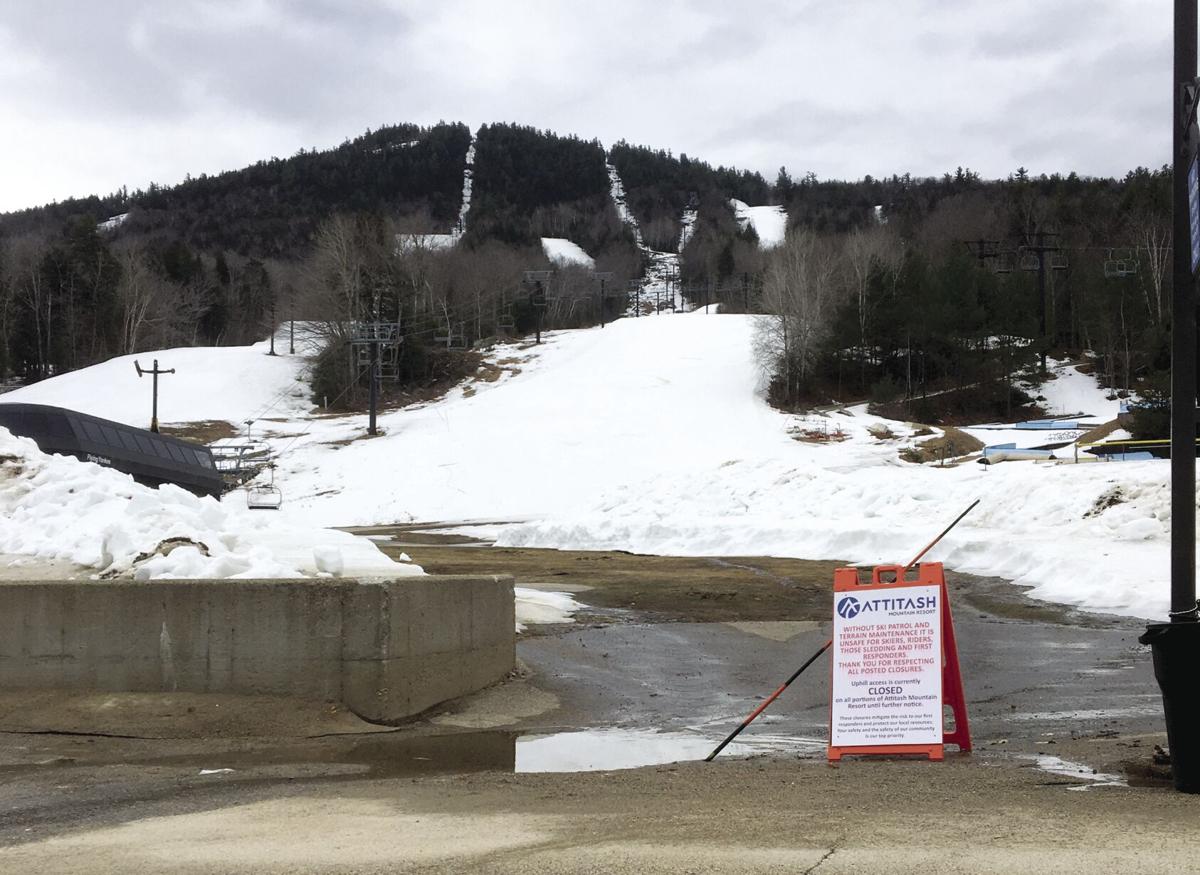 Last April, Vail Resorts posted a sign at the ski area closing the mountain to all access. The sign says: "These closures mitigate the risk to our first responders and protect our local resources." (TERRY LEAVITT PHOTO)

Vail Resorts Inc., owner of Attitash and Wildcat (shown here), had a rough start to the ski season, reporting a net loss of $153.8 million for the first quarter of its current fiscal year, mainly due to the effects of the COVID-19 pandemic. (WILDCAT PHOTO)

Last April, Vail Resorts posted a sign at the ski area closing the mountain to all access. The sign says: "These closures mitigate the risk to our first responders and protect our local resources." (TERRY LEAVITT PHOTO)

PINKHAM NOTCH — A warmer than average winter plus new pandemic-related operations have made it a less than “epic” ski season for ski areas, including two local Vail Resorts Inc. areas that offer the company’s Epic Pass.

That combination of factors have led to many complaints on social media for Attitash Ski Resort in Bartlett and Wildcat Mountain in Pinkham Notch, which were purchased by Vail in September 2019.

But with the return of colder temperatures, Wildcat as of Monday had 10 of 48 trails and three of five lifts open. It also was able to overcome a power outage Saturday that led to lifts having to operate on diesel auxiliary power, according to Eversource's Katlyn Woods, who said the utility's crews worked with Wildcat personnel to restore power by 11:08 a.m. Saturday.

According to Briggs Lockwood of the State Tramway Board, no lift evacuation was needed.

"They had a blown fuse on the feed for the Snocat and Tomcat triple chair lifts that prevented them from operating on electrical power, but they used their backup power. ... They had not loaded anyone on the summit (Wildcat Express quad) when it happened," he said Monday.

“A monumental effort is being made on the part of our resort leadership staff," Wise told the Sun last Thursday.

"Not only to navigate through all the challenges around operating during COVID-19, but also opening a ski resort and operating a ski resort during one of the warmest snow years, early season, in the last five to 10 years. We completely understand people's frustrations," he said. "And every effort is being made to deliver the best experience possible this winter."

Andrew Schuyler, a passholder from Massachusetts who owns a home in Conway, said that people "are really going to town on the Facebook pages talking about the snowmaking and lack of open trails at Attitash and Wildcat.

He says he bought two Epic passes for himself and his wife as well as two of their children, aged 7 and 10.

“That’s a big chunk of change,” said Schuyler, who worked previously in communications for state representatives in Massachusetts and currently is a stay-at-home dad.

He charged that Vail has been lacking both in snowmaking and in communicating with skiers and riders.

“They have failed on both fronts,” he said.

Added local passholder Tom Cosentino of Conway, "The skiing has not been that good (at Wildcat in particular)."

On Monday, Schuyler said, "After skiing Wildcat this past Friday and then Attitash Saturday and Sunday, it's clear that the tension between passholders and Vail remains high.

"I think most people are understanding that the weather has not been ideal this season and that we are living in a pandemic. Having said that, the communication from Vail has been derelict, at best. Also, why have numerous other mountains in the valley, that are subjected to the same weather conditions, been able to open up so much more terrain?" he asked.

I think passholders generally want better communication, more dedicated snowmaking and an understanding from Vail that folks shelled out lots of money and rightfully expect both a better product and more certainty moving forward."

All local areas were hurt by a Christmas Eve/Christmas Day rainstorm that deposited more than 2.5 inches of liquid precipitation.

One saving grace was that artificial snow is better able to withstand such assaults. And natural snowfall at the start of the new year combined with snowmaking improved the picture somewhat, as Attitash as of Tuesday had 14 of 68 groomed trails over two peaks served by four of 11 lifts while Wildcat had 10 of 49 trails and three of five lifts.

That compares with 22 of 57 trails and three of nine lifts that day for Cranmore, 27 of 63 trails and five of 10 lifts at Bretton Woods, four beginner trails served by a Platter pull lift at Black Mountain and 12 of 17 trails and all five lifts at King Pine.

“We are making every effort possible for more terrain," said Wise, originally based in Stowe, Vt.

"The challenge with the weather and snowmaking is not unique to the Northeast this season — you have to go back five years to compare the weather so far this season to another year and significant efforts are being made to make snow. We are making snow at every weather opportunity we have,” said Wise.

In an Dec. 31 email to the Sun, Schuyler said there are "tensions between Vail and its passholders,” especially with regard to the season's late start — Dec. 11 at Wildcat and Dec. 12 at Attitash.

“While Vail has correctly highlighted these weather-related challenges, it does not excuse the company’s on-mountain response or its lack of communication with its customers,” wrote Schuyler.

He said Cranmore — despite being located at a lower elevation than Wildcat — was able to get open a week earlier with limited terrain.

“While a week may seem trivial, Cranmore beating Wildcat on opening day is big news in the industry. Moreover, once Wildcat and Attitash opened, they were limited to a run or two at each mountain, while Cranmore quickly featured almost a dozen trails,” said Schuyler.

Likewise, he said, the dearth of information coming out of Vail has been “nothing short of a marketing and communication professor’s worst nightmare.”

In October, he noted, Wildcat’s website and Twitter account announced that opening day was slated for November 13. That information, he said, was still posted well into December.

Wise acknowledged to the Sun there had been some oversights said but they have been corrected.

Like all ski areas in the industry, Vail Resorts implemented changes to protect employees and customers. They include online ticket sales, chairlift social distancing, and masks on the lifts and in lift lines.

The impact of COVID-19 took an economic toll.

As syndicated ski columnist Marty Basch reported in the Dec. 31 edition of the Sun, Vail Resorts reported a net loss of $153.8 million for the first quarter of its current fiscal year ending Oct. 31. That was a decrease of 44.4 percent year over year; however, the company reported an increase of about 20 percent in season pass sales through the first week of December.

Wise referred to a Dec. 10 letter to Epic pass holders from Vail Resorts CEO Rob Katz in which he acknowledged some bumps in customer service at the company’s call centers. Katz took responsibility and said changes were being implemented.

“I wish I could say it will all improve overnight, but candidly, this is going to take some time to get up and running,” wrote Katz.

Once part of Ski-NH, neither Wildcat nor Attitash has been part of the statewide organization for several years dating back to when they were purchased by Peak Resorts.

She said she looks forward to building a good working relationship with Vail.