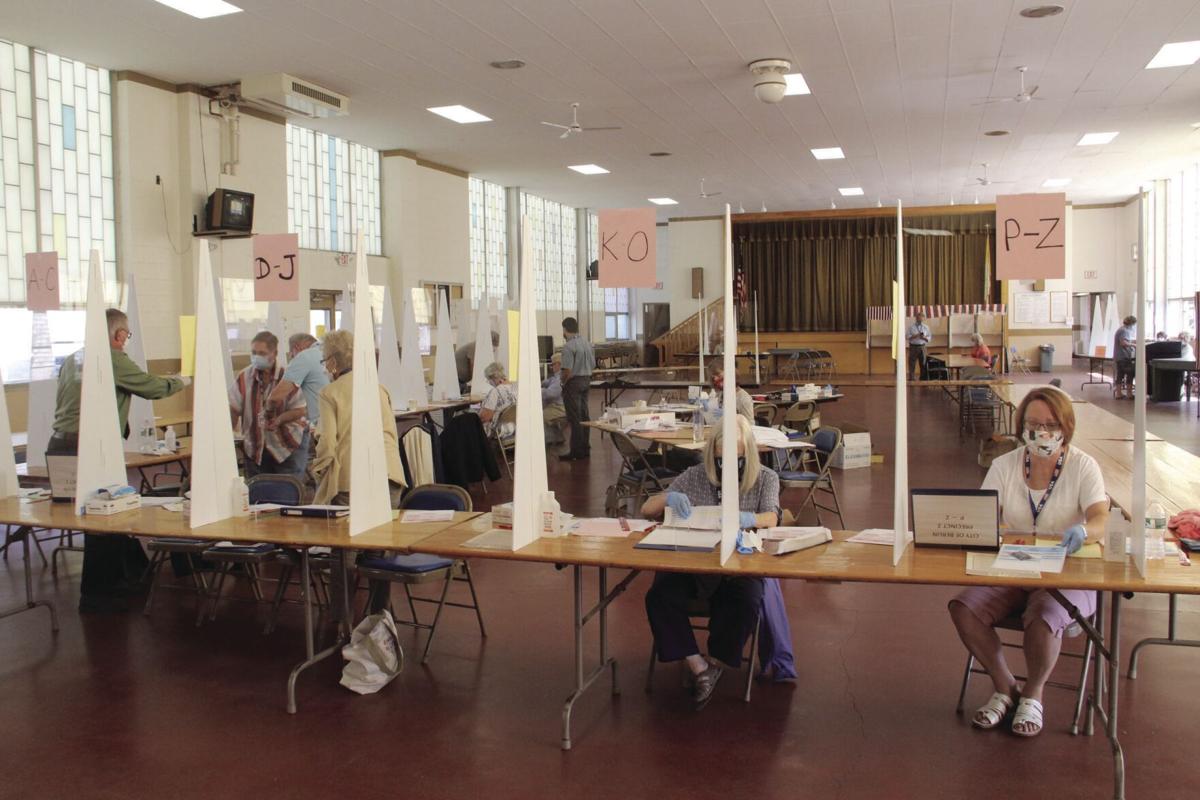 Election workers in Berlin said voting was steady but a little slower this year. Two precincts vote at St. Anne Church hall and extra precautions were put in place for Tuesday's election because of COVID-19. Over 20 percent of those voting chose to vote by absentee ballot. (BARBARA TETREAULT PHOTO) 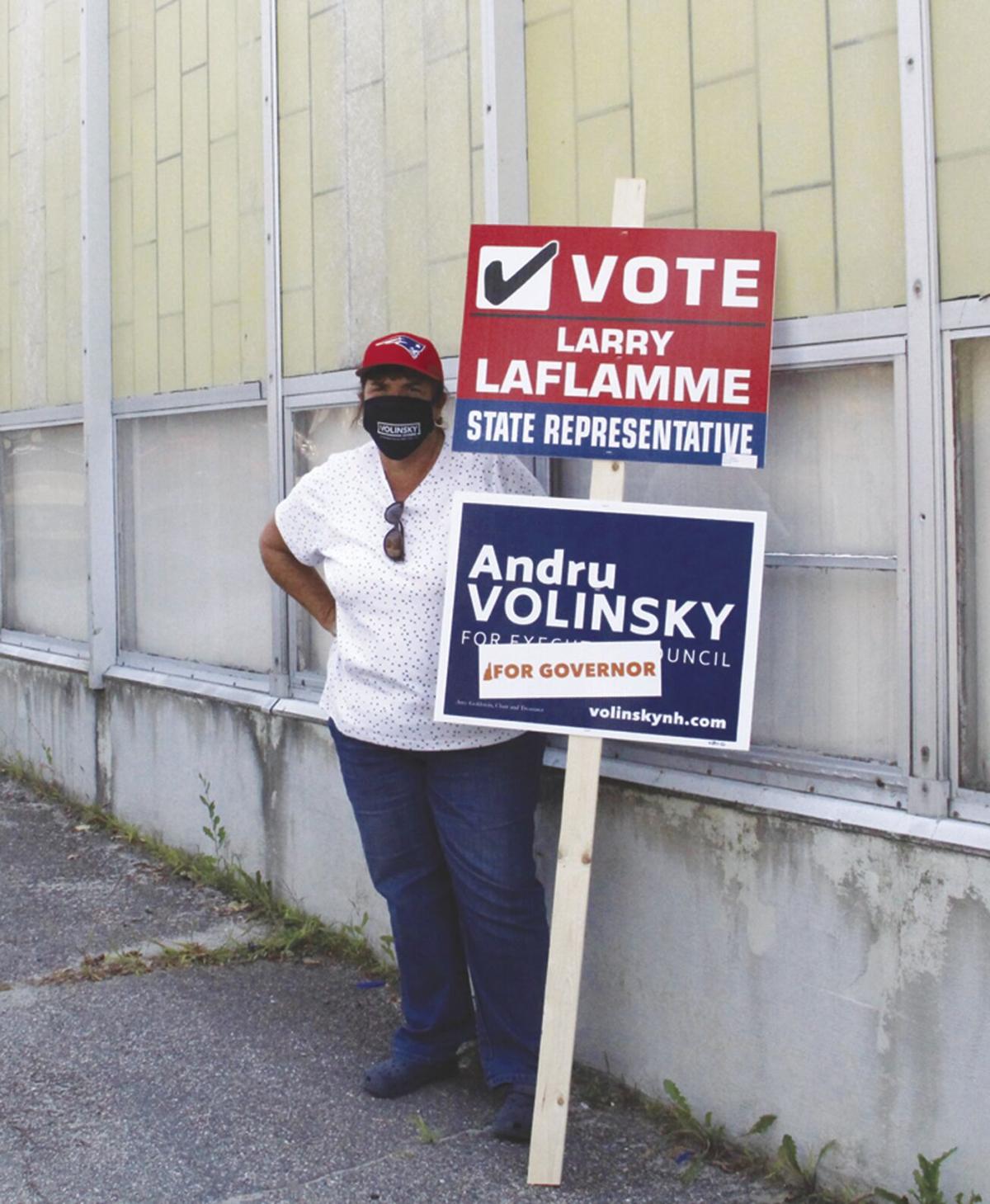 Martha Laflamme campaigned for both her husband, State Rep. Larry Laflamme, and for Democratic Gubernatorial hopeful Andru Volinsky. While Volinsky lost the state-wide, he carried the city.(BARBARA TETREAULT PHOTO)

Election workers in Berlin said voting was steady but a little slower this year. Two precincts vote at St. Anne Church hall and extra precautions were put in place for Tuesday's election because of COVID-19. Over 20 percent of those voting chose to vote by absentee ballot. (BARBARA TETREAULT PHOTO)

Martha Laflamme campaigned for both her husband, State Rep. Larry Laflamme, and for Democratic Gubernatorial hopeful Andru Volinsky. While Volinsky lost the state-wide, he carried the city.(BARBARA TETREAULT PHOTO)

ANDROSCOGGIN VALLEY — It was an election day like no other with social distancing and masks required. Clerks reported unusually high numbers of people voting by absentee ballot with fears of the COVID-19 changing voting patterns. In Berlin, 368 chose to vote by absentee ballot in the safety of their residences or 23 percent of those voting. In a normal election, City Clerk Shelli Fortin said the city would handle about 600 absentee ballots. The number was similar in Gorham where 125 out of 572 votes were by absentee ballot.

In Milan, the start of school was postponed a day to allow voting at the Milan Village School gymnasium.

Voting at the city’s three polling places was described by poll workers as steady but slower than usual. Extra precautions were taken at the polls with voters required to wear masks and most election workers behind plexi-glass, and all workers had gloves. Attitudes were good and workers were patient explaining the precautions employed to protect everyone from the coronavirus. Outside some local candidates and their supporters were taking advantage of the traffic (and beautiful late summer weather) to campaign for the November general election.

Outside the St. Anne Church hall, where two precincts vote, Mark Evans was campaigning for his friend, Eli Clemmer. Clemmer, a Berlin resident and school librarian, was seeking the Republican nomination for U.S. Congress. The first time candidate was running against two former state representatives and understood from the start his campaign was a long shot. But he said he was running to encourage more everyday people to get involved and to run a campaign free of mudslinging.

Evans ran uncontested for one of the three state representative nominations on the Republican ballot.

Hennessey issued a thank you to voters and thanked Starr for his service. She now faces Rep. Susan Ford of Easton in the November general election.

The other contested local primary race was for the Executive Council seat. Associated Press results show former Executive Councilor Joseph Kenney of Wakefield with 79 percent to 21 percent victory over Kim Strathdee of Lincoln. Berlin Sun results show he received a total of 903 votes to 262 votes in Berlin, Gorham, Milan, Dummer, Randolph, and Shelburne.

Kenney will now compete for the position for the fifth time with incumbent Mike Cryans of Hanover. Cryans defeated Kenney in 2018 after three tries and Kenney will now try and regain his old position.

In state and federal races, the valley favored Corky Messner slightly over Don Bolduc for the Republican nomination for U.S. Senator Jeanne Shaheen. Shaheen had limited opposition for the nomination for a third term.

While state Senator Dan Feltes carried the state in the race for the Democratic nomination for governor, the valley favored Executive Councilor Andru Volinsky by a 759-632 margin. Volinsky campaigned hard on school funding and had been active worked with Berlin on its battle to get school aid increased. He also had the support of former Berlin school board member Martha Laflamme who spent the day campaigning for Volinsky and her husband, Rep. Larry Laflamme outside St. Anne Hall.

The Republican nomination for the U.S. Representative seat was won by Steven Negron, who ran last time. He defeated Lynn Blankenbeker, Matthew Bjelobrk, and Clemmer. Messner will now go up against three time incumbent