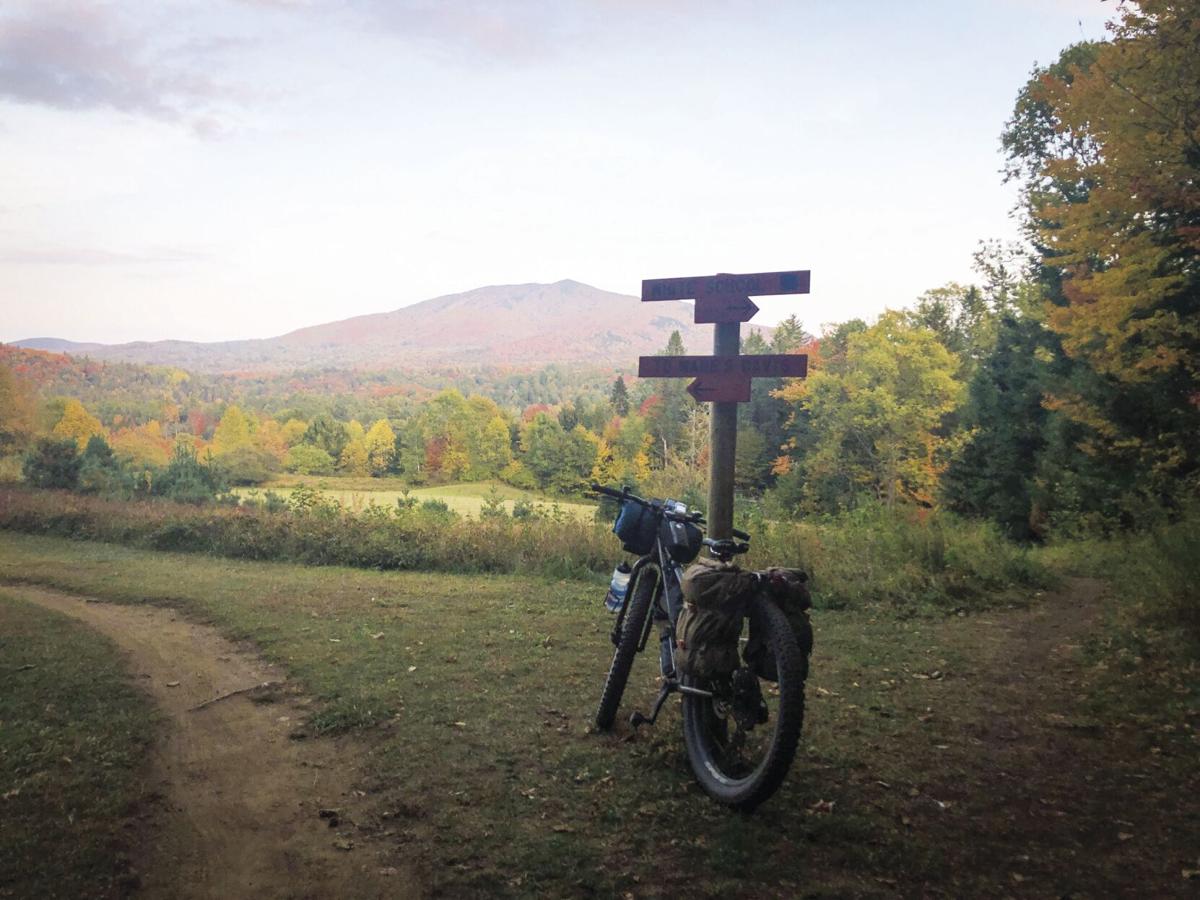 Gorman rode the challenging course on a lightly loaded mountain bike that took cyclists all over Vermont including the Northeast Kingdom. (BRITTNI GORMAN PHOTO) 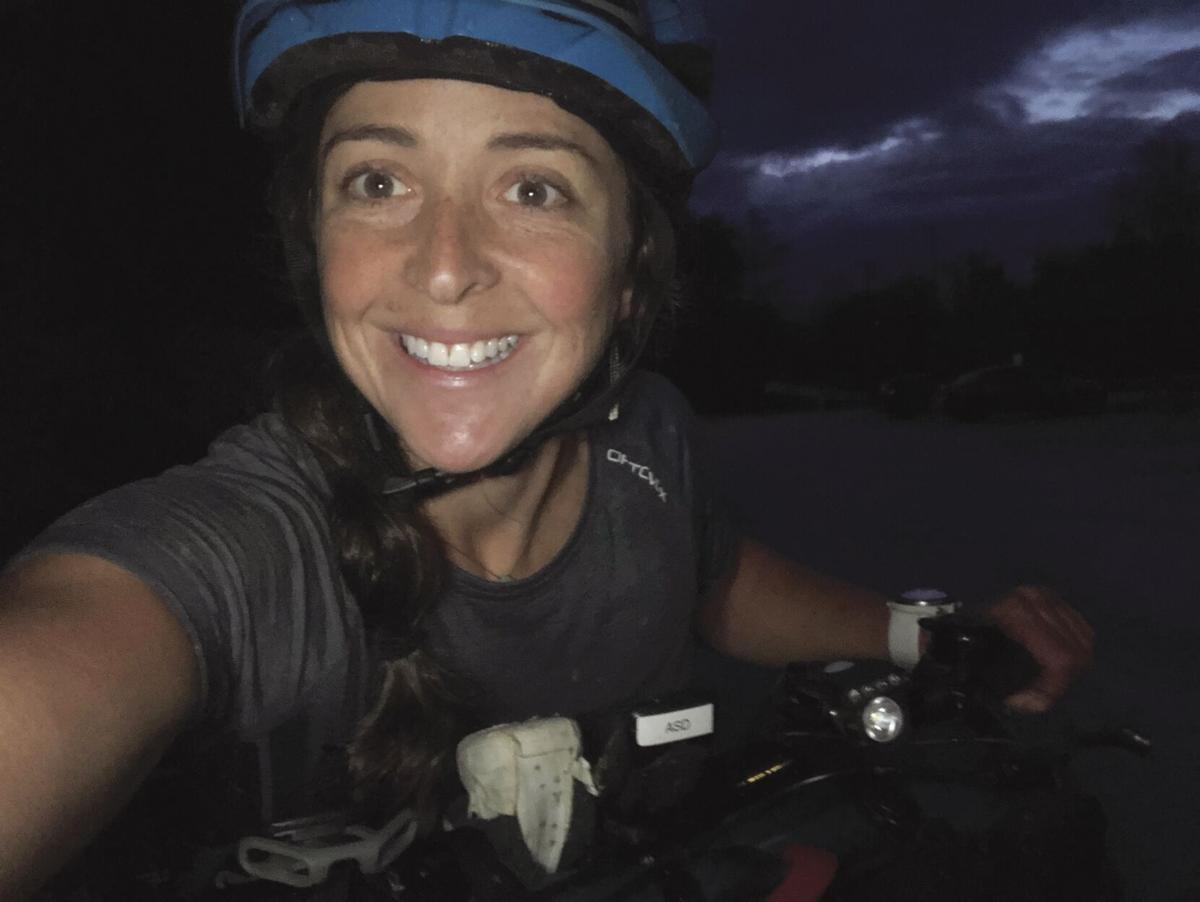 Brittni Gorman of Glen is all smiles as she finishes the 2020 Vermont Super 8 earlier this month. (BRITTNI GORMAN PHOTO)

Gorman rode the challenging course on a lightly loaded mountain bike that took cyclists all over Vermont including the Northeast Kingdom. (BRITTNI GORMAN PHOTO)

Brittni Gorman of Glen is all smiles as she finishes the 2020 Vermont Super 8 earlier this month. (BRITTNI GORMAN PHOTO)

For Brittni Gorman of Glen, it was quite a long week or so alone in the woods with her loaded mountain bike.

The Endicott College grad pedaled though the clarity of day and creepiness of night. There were times she felt invincible. She also wanted to quit.

But she persevered through the mountains and valleys of the Green Mountain State during the grueling 2020 Vermont Super 8 self-supporting bikepacking race. The Grand Depart left Montpelier Sept. 25 and took the handful of entrants along a challenging 645-mile route with over 60,000 feet of vertical.

It was worth it.

She was the first overall finisher and the only known female finisher to ever complete the full figure 8-shaped route. It took her eight and a half days.

“I gave it everything, I poured my heart into it and I’m happy it was hard,” she said in a couple of email exchanges and phone call.

Gorman’s no stranger to ultra events. The 34-year-old has undertaken local challenges like bikepacking the Coos Loop. She’s run tough races like the 25K Chocorua Mountain Race and half marathon Kismet Cliff Run.

She did Colebrook’s run/bike Metallak event in 2019. A skier, she undertook Last Skier Standing at Black Mountain last winter and was a Friday Night Lights uphilling regular.

On her own, she’s completed a number of run/bike routes like traversing the notches from Pinkham to Franconia via bike and then climbing the Eaglet (a solitary pillar) for the finish, and a Presidential traverse run with a Jefferson Notch bike return. She trained for the Inferno this year, but it was pandemic cancelled.

Before moving to the valley in 2017, she ran Rim to Rim in the Grand Canyon and the Oregon Coast 50k (her first ultra). While living in Colorado, she joined a running club providing a gateway to ultra events. She also did traditional solo bike touring.

A central Massachusetts native, her family visited the valley to hike and camp, but it wasn’t until she moved here that she realized the full magnitude of its multi-sport opportunities.

She recently started work as documentary film producer after being employed in digital marketing at a valley agency and also runs a small handcrafted art business called Mountains For Breakfast.

To prepare for Vermont, Gorman spent long days in the saddle with a few overnight trips to dial in her gear — always a work in progress. Biking, running, yoga and meditation are ways for her to maintain balance.

“This was more than a bike race,” she said. “It was a multitude of beginnings. A series of moments connected through landscapes and humans, new pathways and unknowns, fear and joy, resilience and perseverance. An opportunity to be fully present. An opportunity to practice discernment.”

She had highs and lows. On her last day, 120 miles, the pint-sized dynamo relished a super strong grind up Brandon’s Gap. Some lows turned into highs like when she was unsure of her first ride at night. She texted the race director about the stretch, a rugged ATV trail hike-a-bike. She did it. The race director greeted her at the end at a campground at 2 a.m. with a warm smile.

After a slog through a storm outside Chester she yearned to make camp in a safe and dry place, and to recharge herself and her devices. At camp, she had a conversation with a race host who made her think beyond the race to “realize that this bike ride was so much bigger than me. It was raising the bar for other women to face their fears and dreams.”

She experienced trail magic, but also self-doubt when the route took her close to her truck and she weighed whether to continue or go home. A text from her 11 year-old niece inspired her to press on.

She was also encouraged through dot stalking. Carrying a tracker, others could follow her “dot” along the route and message her, lighting up her phone with inspiration.

“I hope this inspires anyone to not be afraid of knowing who they really are. When we stretch the limits of our comfort zone we are preparing our minds and our nervous system for the next time around,” she said.