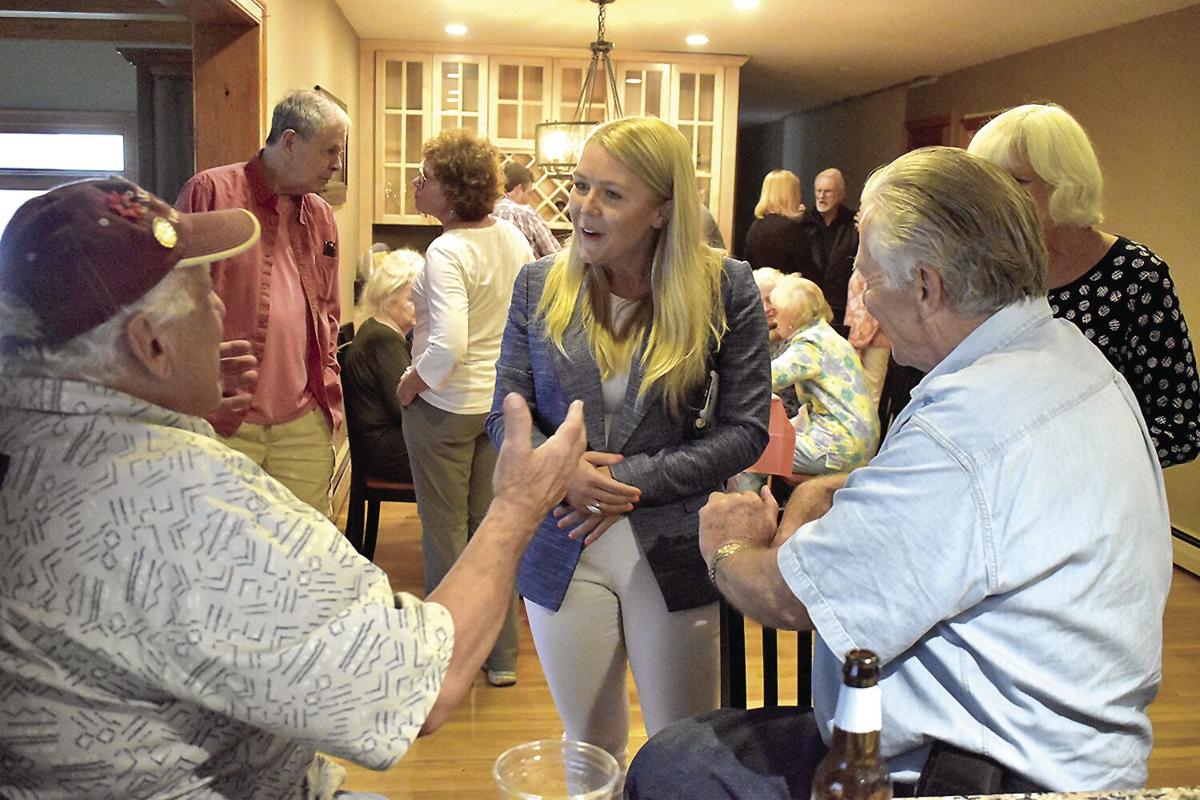 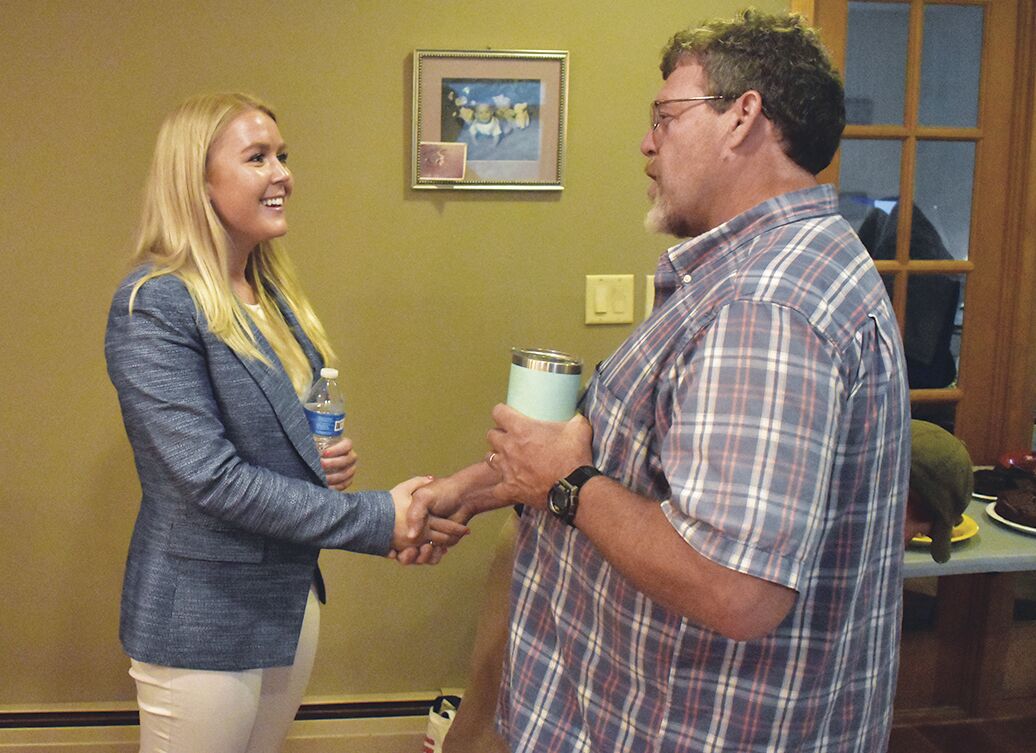 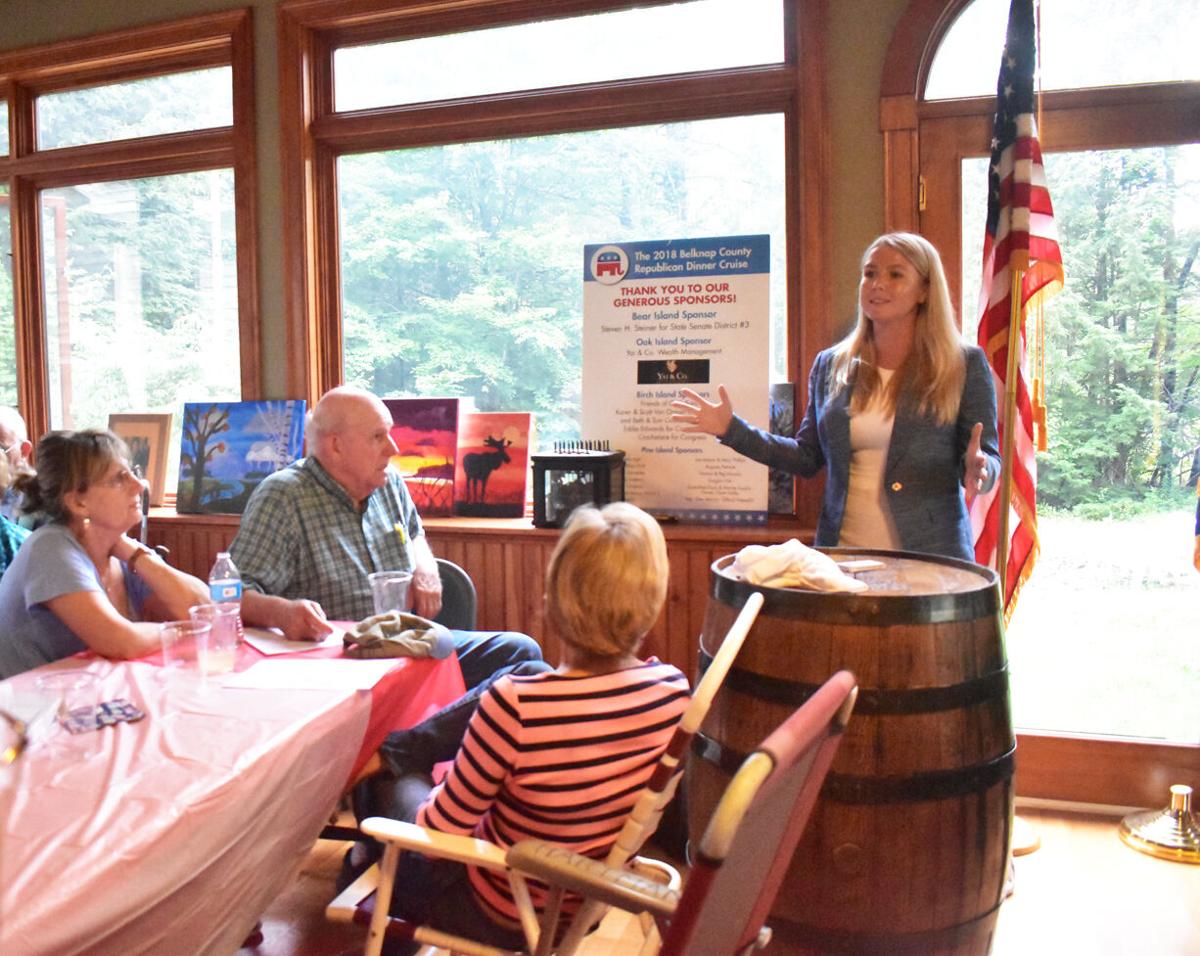 CONWAY — A congressional hopeful and former White House staffer, who said President Donald Trump used to affectionately refer to her to as “one of his kids,” made her first appearance as a candidate Monday at the home of the Mount Washington Valley Republican Committee Chairman Steven Steiner.

Karoline Leavitt, 23, of Hampton said she filled out the paperwork to jump into the 2022 race just before heading to Steiner’s Center Conway home, where she spoke to a crowd of about 50 people. She is hoping to unseat Congressman Chris Pappas (D-N.H.) next year.

According to her campaign, Leavitt’s birthday is in August, which would put her at the minimum age of 25 to sit in the U.S. House of Representatives by the November 2022 election.

According to WMUR, she is the fourth Republican and first woman to enter the congressional fray, the other contenders being Julian Acciard, 33, of Derry; Gilead Towne, 31, of Salem; and state Rep. Tim Baxter, 23, of Seabrook.

Leavitt grew up in Atkinson, a Rockingham County community just outside CD 1, scooping ice cream at one of her family’s businesses. She attended St. Anselm’s College and worked as a producer at WMUR before joining the Trump White House in 2019 and becoming assistant press secretary under Kayleigh McEnany in 2020.

In January, she started working as director for communications for U.S. Rep. Elise Stefanik (R-N.Y.) but has since moved to the Seacoast.

“I love President Trump, as many of you in this room do,” she told the gathering. “I’m sure I saw something in him that we all did, and millions of people across our country, and I knew his agenda was uplifting families like my own,” said Leavitt.

“So, I went to work for him, I moved to D.C. And it was the second time I’ve ever been there in my life. But I said, ‘You know what? I want to work for this man and serve the American people in his White House.”

“I was so blessed to spend many amazing moments during the COVID-19 pandemic  when he was briefing every day and fighting fake news media to get you real information, like the fact that hydroxychloroquin works and the fact that, I don’t know, maybe COVID actually did originate in the Wuhan Lab,” said Leavitt.

“I had the chance to brief him (Trump) before he would take the podium, many, many nights and weekends,” she said.

She said Trump had a penchant for calling spur-of-the-moment press conferences on Twitter. Sometimes she’d have to scramble to get from the gym to the White House.

“My generation is brainwashed,” said Leavitt. “They voted overwhelmingly for President Biden. And we as Republicans need to take a hard look in the mirror and realize, if we don’t start changing minds with people that are my age, we will lose elections, but more importantly, we will lose our country.”

She told the Sun she was motivated to run after watching Pappas voting like a “puppet” for House Speaker Nancy Pelosi. By contrast, she describes herself as “an America First fighter” on her business card.

Asked by the Sun how familiar she is with the Mount Washington Valley, Leavitt said she has gone skiing here every winter and said the Omni Mount Washington Resort is one of her “favorite places in the world.”

“I’m always looking for an excuse to come here,” she said.

Asked about fundraising, she said she expects her campaign to “raise some good money” and there have been a lot of donations already from people seeking conservative change. “We will be hosting many events and fundraisers,” she said.

“I played third base; anyone who’s familiar with baseball, softball will tell you that third base is a hot corner,” she said.

Asked how she plans to defeat Pappas, she said that she will expose his voting record and suggested that Democratic voters won’t support him after that.

She also blamed President Biden and Pappas for rising gas prices, inflation and exacerbating the opioid crisis with open borders.

Reached by phone Tuesday, Steiner said Leavitt is “well spoken” and sincere with an impressive resume at a young age.

“She knocked it out of the park,” said Steiner.

For more about Leavitt go to karolineforcongress.com.

Good! Send Pappas home. In fact make him walk home ALL the way home as another failed politician. The last kind of people we need in government is anyone like him.