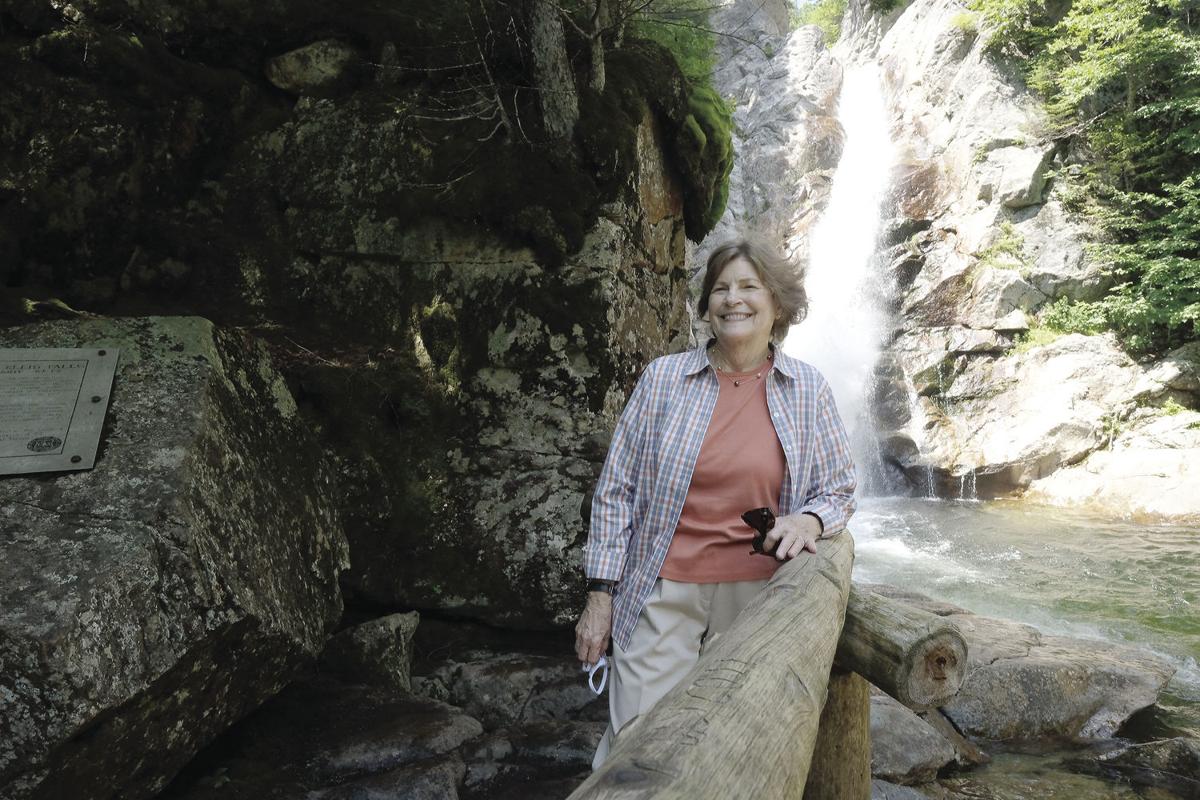 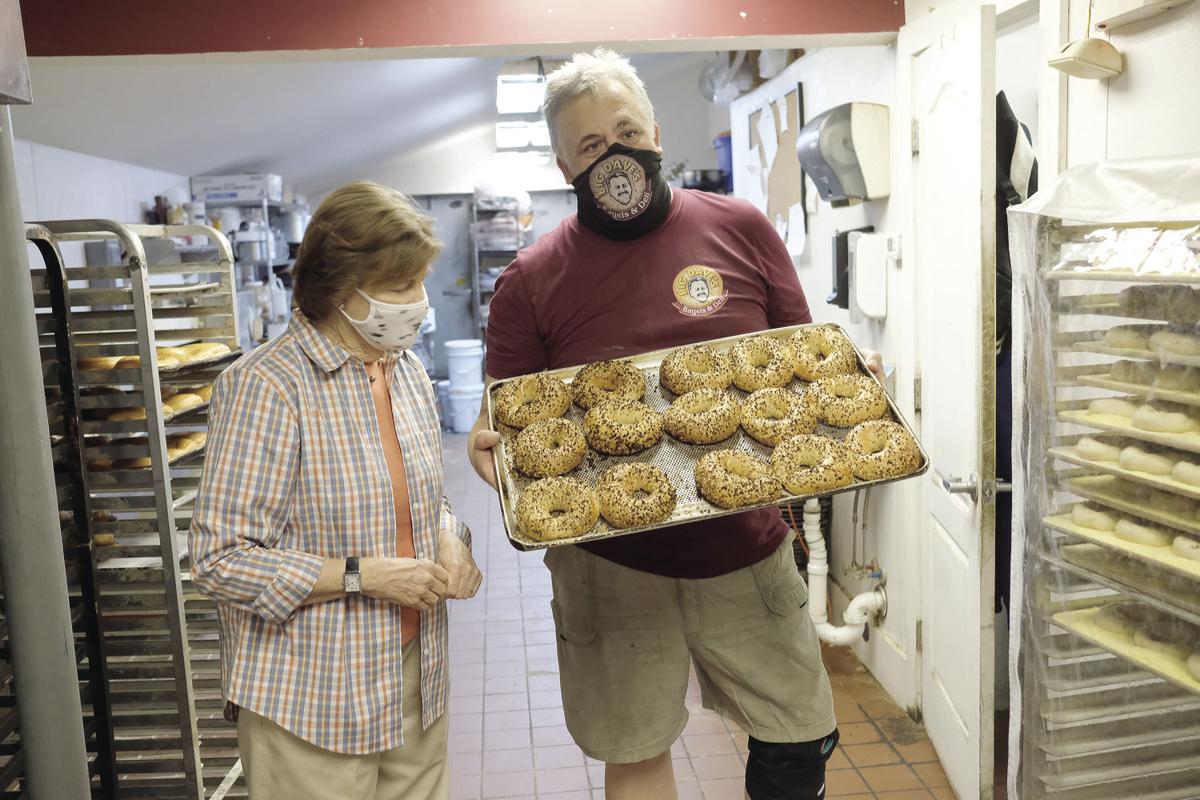 U.S. Sen. Jeanne Shaheen (D-NH) gets the “dime-tour” of Big Dave’s by owner Dave Hausman in North Conway on Thursday. Hausman holds a sheet of “everything” bagels, which are his most popular product. (JAMIE GEMMITI PHOTO) 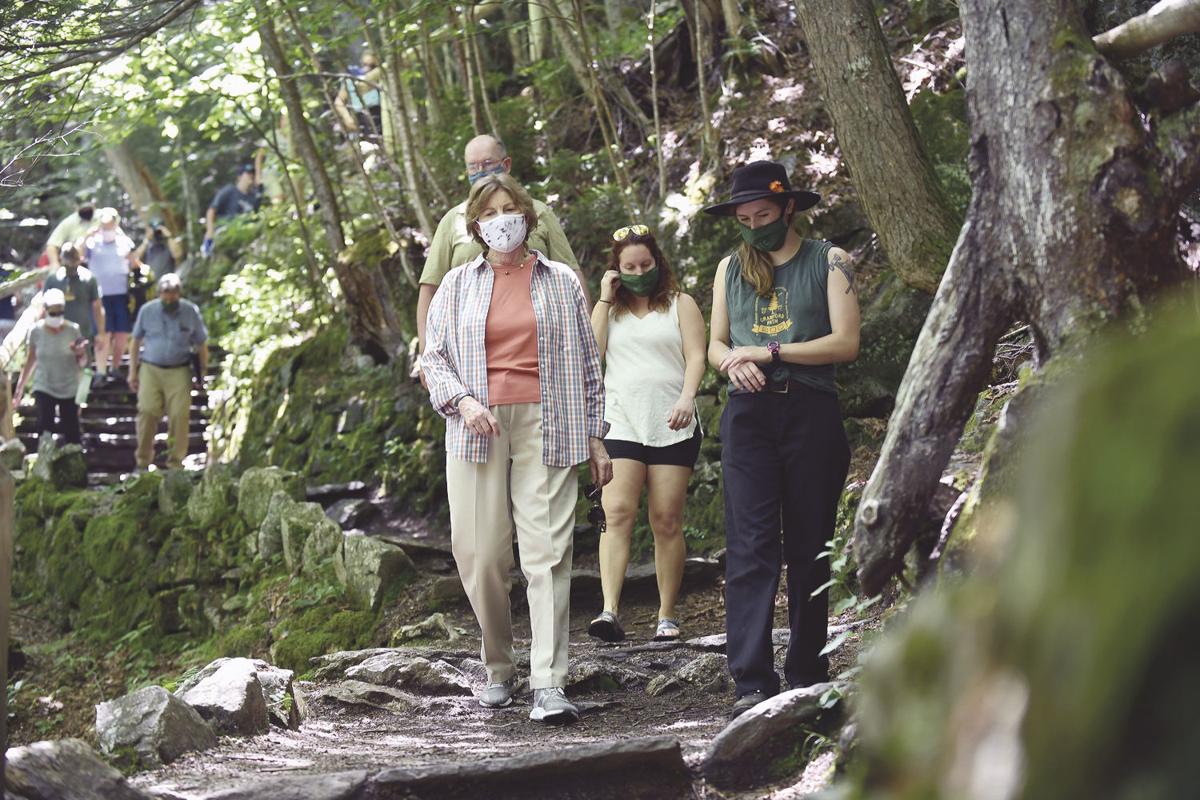 U.S. Sen. Jeanne Shaheen (D-NH) gets the “dime-tour” of Big Dave’s by owner Dave Hausman in North Conway on Thursday. Hausman holds a sheet of “everything” bagels, which are his most popular product. (JAMIE GEMMITI PHOTO)

CONWAY — “It’s been a challenge, not only for us but for you and for everybody,” Dave Hausman of Big Dave’s Bagels in North Conway told U.S. Sen. Jeanne Shaheen (D-N.H.) during her hourlong visit Thursday morning at his shop to find out how small business in New Hampshire have been faring during the pandemic.

With the Senate currently, recessed, Shaheen was eager to lobby for support of passage of the Prioritized Paycheck Protection Program (P4) Act, legislation she introduced that would allow these small businesses to access a second round of PPP funding.

Shaheen recently led a successful effort on the Senate floor to extend the PPP deadline until Aug. 8, which she said has been a lifeline for small businesses in New Hampshire.

However, she said, many, particularly those in the restaurant and hospitality industries, are still struggling.

“We need to pass an additional round of assistance; we need to help small businesses; we need to extend unemployment benefits to those still out of work.

And we need to look at how we help schools and hospitals,” said Shaheen.

Back in May, Hausman — owner with wife, Sue, of the bagel shop located at 1130 Eastman Road now in its 11th season — was among small business owners who took part in an hour-long conference call with Shaheen on the financial help they received through the PPP under the Coronavirus Aid, Relief and Economic Security (CARES) Act.

During that conference call, Shaheen had said, “I’ve got to get a Big Dave’s Bagel.”

“After I got off the phone on that conference call with the senator, I turned to my wife and said, ‘You know what? I think she’s going to come and visit us, you watch!’ and she did,” beamed Hausman on Thursday.

He said the senator and her staff ordered some bagels and a BLT for a post-visit picnic at Glen Ellis Falls in Pinkham Notch, where she headed to speak with U.S. Forest Service and Appalachian Mountain Club officials to highlight the importance of the Land and Water Conservation Fund.

At Glen Ellis Falls, Shaheen thanked the Forest Service, AMC and White Mountain Trail Collective for the work they do to conserve natural resources

“For us in New Hampshire it’s not just about maintaining these wonderful resources but it’s also an economic impact,” Shaheen said. “As we all know, the outdoor economy is huge in New Hampshire. It’s about $8 billion a year, and making sure that we can preserve that and continue to encourage people to come in and enjoy our resources is really important.”

She said it is always important when acquiring public lands to provide the money to maintain them, adding “but we’re not very successful with that.”

She did however note that the Great American Outdoors Act is working its way through Congress, that would provide funding for a backlog of projects, that would help to both protect natural resources and put people back to work.

The Senate recently passed the act, bipartisan legislation cosponsored by Shaheen to permanently fund the LWCF and provide mandatory funding for deferred maintenance on public lands. The legislation is currently pending before the House of Representatives.

“I’m really excited and hopefully we will finish the final hurdle and get the Great American Outdoors Act through the House without any changes and it will go to the president’s desk,” she said. “He says he is going to sign it.”

In her stop at Big Dave’s, Shaheen said the bill is a “no brainer” when it comes to its value for a state such as ours that is home to so many outdoor recreational areas.

While discussing the pandemic with Shaheen, Hausman said his business model changed to takeout with a front door pickup after reopening in late April after  closing for 4½ weeks.

Hausman noted that through the help of Jac Cuddy, executive director of the MWV Economic Council, he was able to obtain a $25,000 loan from the council’s revolving loan fund as he awaited word on whether he would receive a PPP loan.

Hausman and Shaheen discussed a potential negative impact for valley business owners that are strapped for help, since the federal $600 combined with state unemployment checks was deterring some workers from returning to work.

She said, however, that with the lifting of the state ban preventing people from being evicted from their homes, she had heard from Realtors that the extra money would help many people to make their rent payments.

Hausman told Shaheen that because he was able to get the loans, he has been using the PPP money to reward his eight full-time and 12 part-time workers with bonuses, noting afterward, “I did not want to penalize them for wanting to come back to work (and losing the unemployment benefits and $600).”

Asked how she thought New Hampshire has handled the reopening of the state under Republican Gov. Chris Sununu, Shaheen gave a thumbs up. She was critical, however, of the Trump administration’s overall response, saying, “There has been no (national) leadership. That’s the problem.”

It has been a busy week for the senator. Her visit to the valley Thursday followed stops on Monday at Popovers Restaurant in Epping and a runway reconstruction project being led by Pike Industries at Portsmouth International Airport.

After her stop at Glen Ellis Falls at 12:30 p.m. Thursday, she was to travel to Berlin to visit Burgess Biopower to discuss renewable fuel sources and the New Hampshire biomass industry.

For more information, go to shaheen.senate.gov.