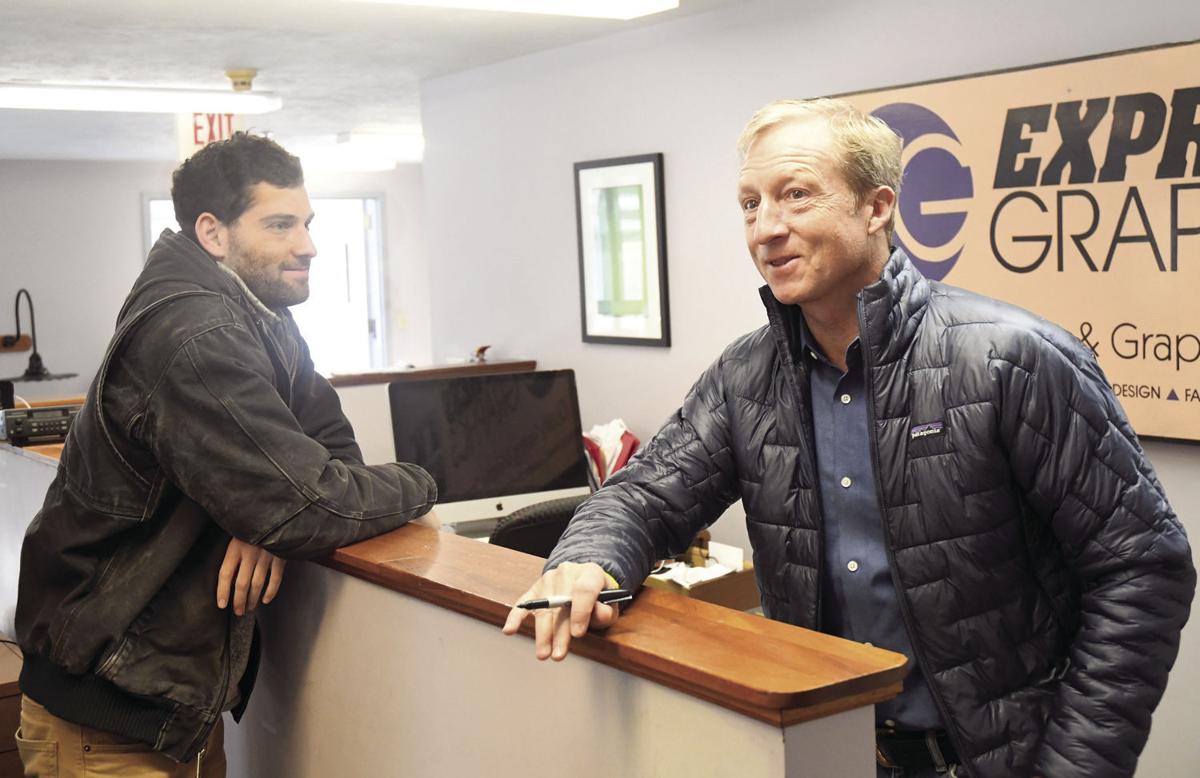 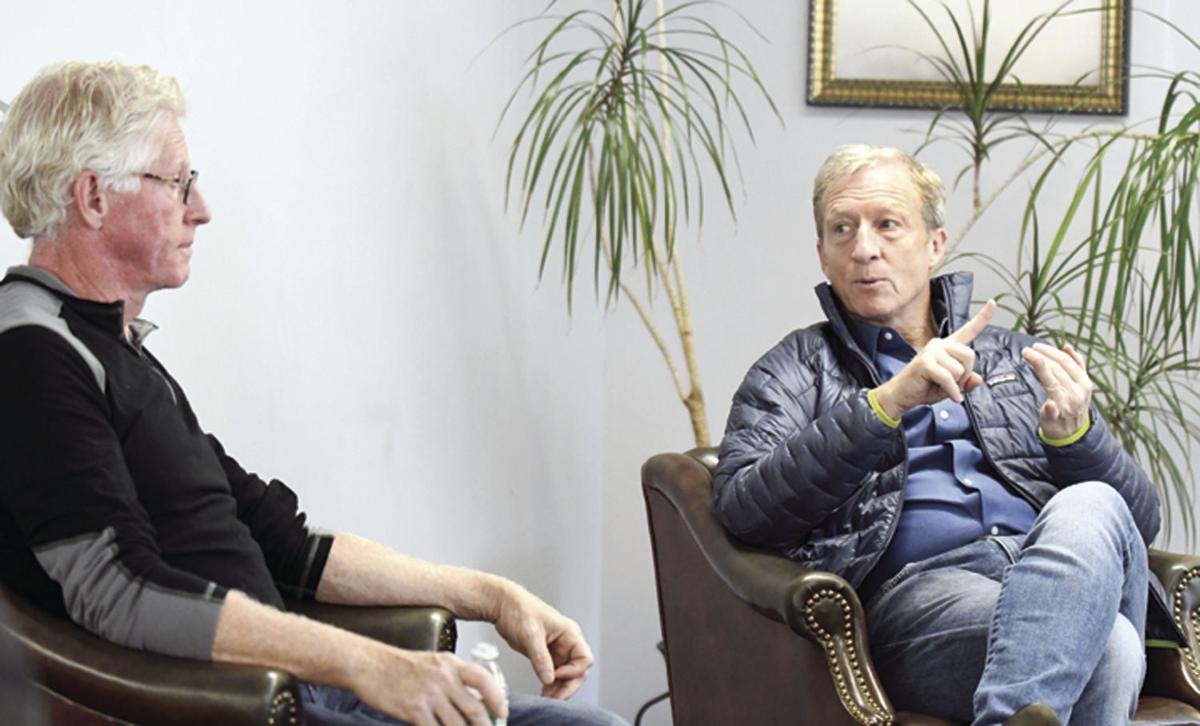 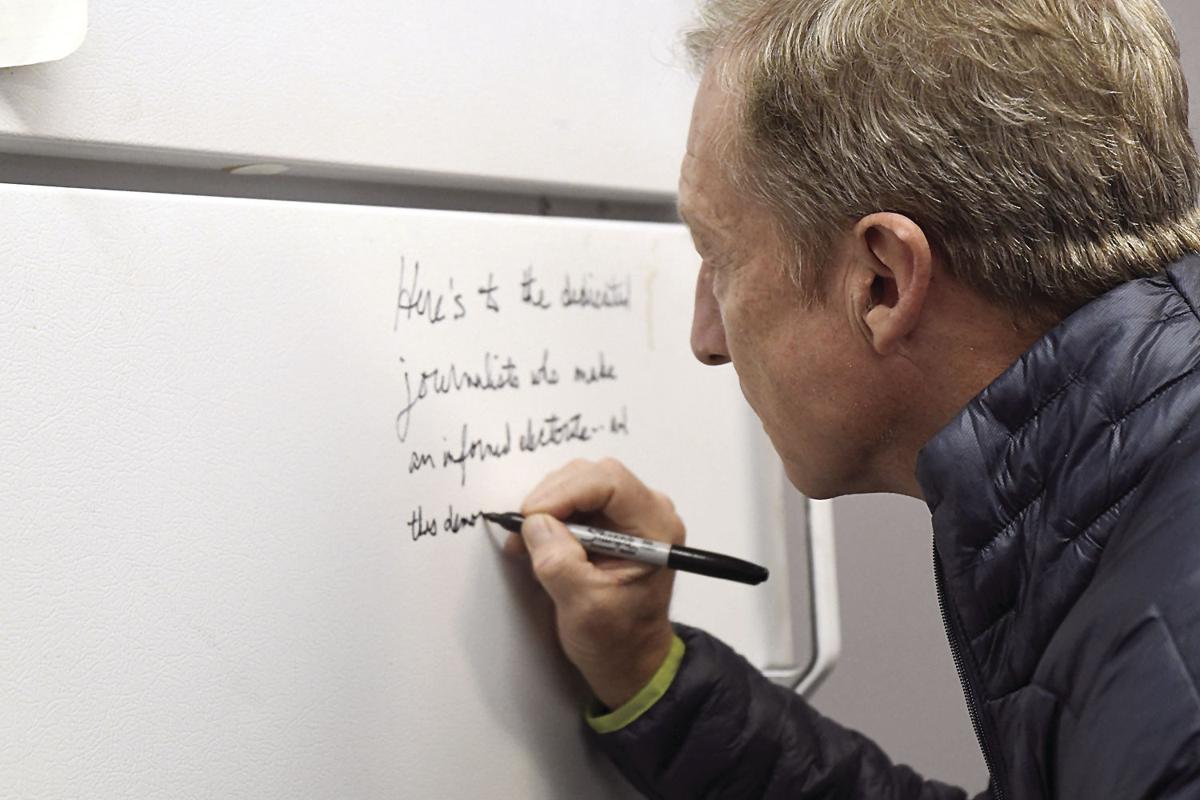 CONWAY — Democratic presidential candidate Tom Steyer says his moral compass led him to enter the race for the White House. He says his compass is guided by civil rights and trying to do the right thing for humanity.

The San Francisco-based billionaire was in the Mount Washington Valley last Saturday, Oct. 26, attending a house party at the home of Gail Paine in Intervale and then stopping at the Sun for a 40-minute editorial board.

Steyer, 62, is known for being the first person calling for the impeachment of President Donald Trump. He ran ads in 2017 and started a “Need to Impeach" initiative that gathered more than 8.3 million signatures.

If you think President Donald Trump is doing a good job with the economy, Steyer would love to debate with you.

“I think this guy is going to turn out to be a disaster on the economy. He sucks. You can quote me on that, he sucks," Steyer said during the sitdown with Sun staff.

“I was reading the paper today — a trillion-dollar deficit with full employment," he said, shaking his head. "This is the party of deficit reduction, deficit hawks. 'We’re going to close down the government.' Remember those days? Four hundred billion dollars of increased deficit based on his tax plan. Deficit reduction? Really. I had someone try to say that to me as a Republican, and I said, ‘Don’t. Don’t even say it. I’m not going to listen to one word you say, that’s complete bull.’ So, a huge deficit. Housing sales off, housing starts off, car sales off — look, we’re in a weakening economy.

“People would say he’s trying, though, and that we’ve been screwed by China for all these years,” Sun Publisher Mark Guerringue commented, to which Steyer responded: “You know what I like? Succeeding. ... (Trump) is incompetent."

Steyer also believes the nation needs to admit climate change is real and must be addressed.

“I am by far the strongest candidate on climate,” he said. “Look, I would declare a state of emergency on day one. I think what (Trump) is doing on climate, honestly, is probably the worst attack on the American people by an American president ever. To me, it’s corrupt. He thinks it’s in his political advantage, and he’s going to get money from oil and gas companies.

“I think he is endangering everyone in this room. I don’t think it’s just Brett (Guerringue, age 29) or his kids. You guys have no idea how fast this is coming,” Steyer said.

“Look, this is the guy who before Oct. 20, 2017, said he didn’t believe the Russians had hacked the elections. Every intelligence and defense person in the United States knew it, and he said electronic warfare against the American democracy, I’m with Vladimir Putin. Excuse me. It’s incredible. The question is why is he still there? That’s the question.”

Although both men have enormous wealth, Steyer said he has had no business dealings with and never traveled in the same circles as Trump. Nor would he want to.

“I don’t like selfish, mean people who are racists, period. Rich or poor,” he said. “Rich makes it worse. That’s all I see is a selfish, mean person who is a racist who doesn’t believe the law applies to him. He thinks he can do whatever he wants to women, to black people, he’s a creep. He’s a real creep.”

Steyer said it was after the first Democratic debate in June that he knew he had to run.

“You didn’t see a president up there?” asked reporter Tom Eastman.

“It wasn’t that. I think they are all smart, good people,” he said. “I really do. I just felt like they weren’t talking about the issues. My real belief is I think that we are at the proof point that the (1980s) Reagan revolution was a mistake.”

He said he has traveled to “really red states, and when you go there, they do the Reagan model, which is the Trump model.”

Managing Editor Margaret McKenzie asked about a Boston Globe column on Friday that urged Steyer to drop out and put his resources to better use by helping candidates in other tightly contested races.

“I’ve heard this argument before,” he said, admitting he’d not yet read the column. “I would say I started one of the largest grassroots organizations in the United States, NextGen America (a non-profit group that combats climate change, promotes social justice and increases participation in democracy through voter registration and grassroots organizing). In 2018, we did the largest youth voter registration in American history, and it’s continuing just the same, it’s just I’m not running it.

“I did also start an organization called For Our Future with seven national labor unions. We knocked on 15 million doors together in 2016 and 10 million in 2018, and that’s going on exactly the same, but I’m not running it ... it’s allied as a joint venture between those unions and us. The last thing is Need to Impeach. I’m not running it, but it’s still running. You can tell the columnist it’s not a question of either/or but both/and.”

He added: “I hear that question all the time and I can understand it, but the funny thing is, until I announced that I was running, no one actually said what we do in grassroots was valuable. Now, it’s like, ‘Oh, you can’t stop doing that.’”

Asked which three people in history he would like to have dinner with throughout history, Steyer quickly said Jesus, then thought long and hard before adding American author William Faulkner and Civil War Era abolitionist John Brown who advocated the use of armed insurrection to overthrow the institution of slavery in the United States.

For more on the candidate, go to tomsteyer.com.