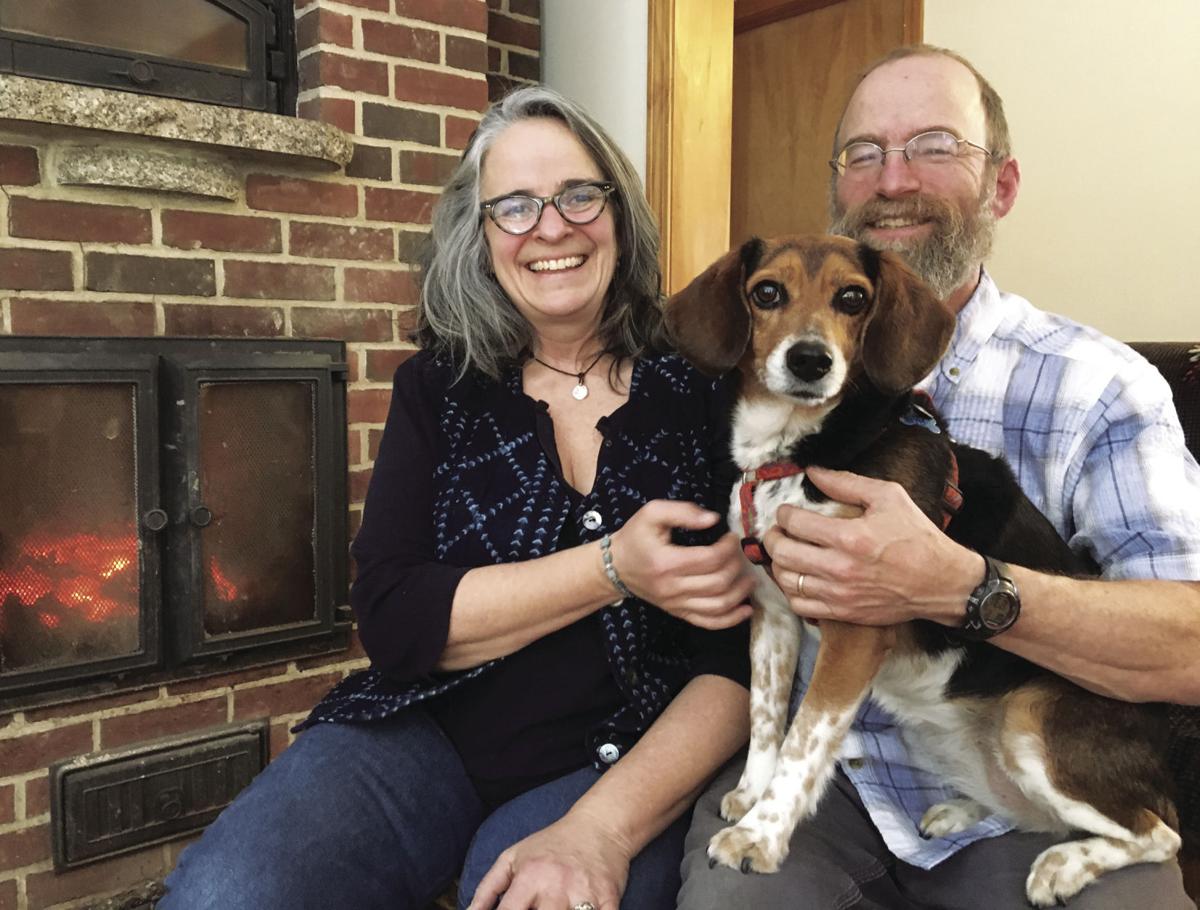 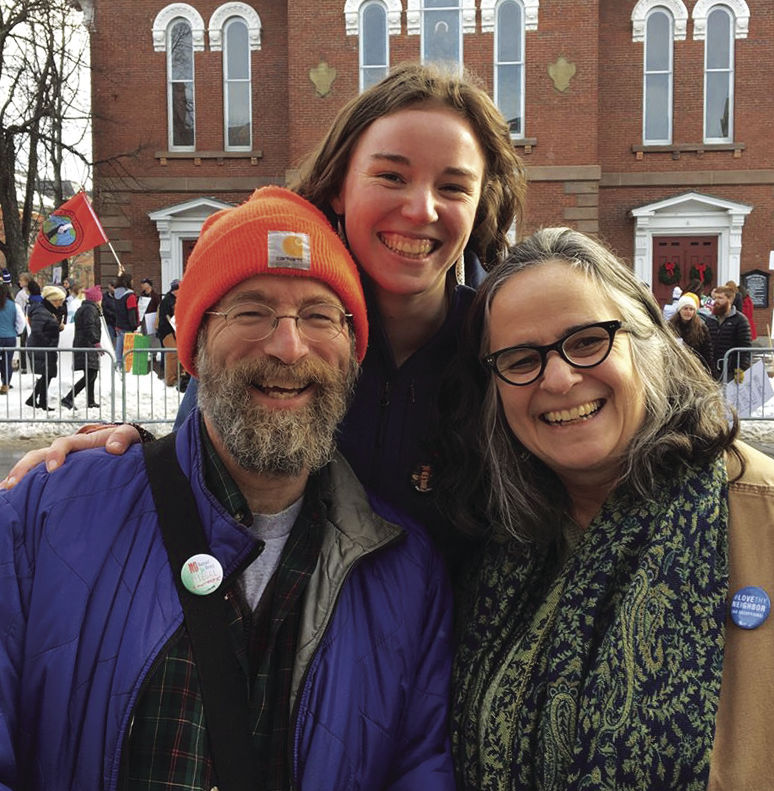 Andy Davis and Andrea Walsh with their daughter Fiona at the Womens’ March in Portsmouth in 2018. (COURTESY PHOTO) 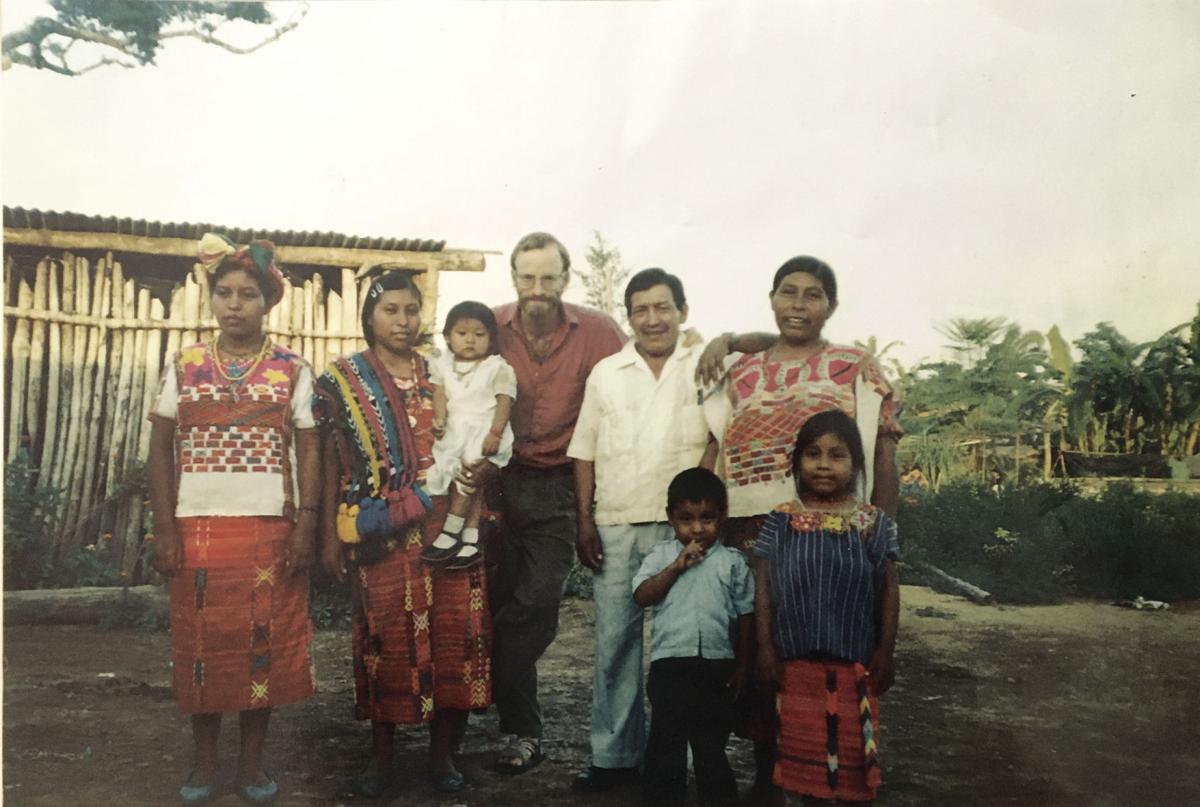 Andy Davis (center), stands with Marcos Ortiz and his family in Guatemala, with whom Davis worked in the early 1990s. (COURTESY PHOTOS) 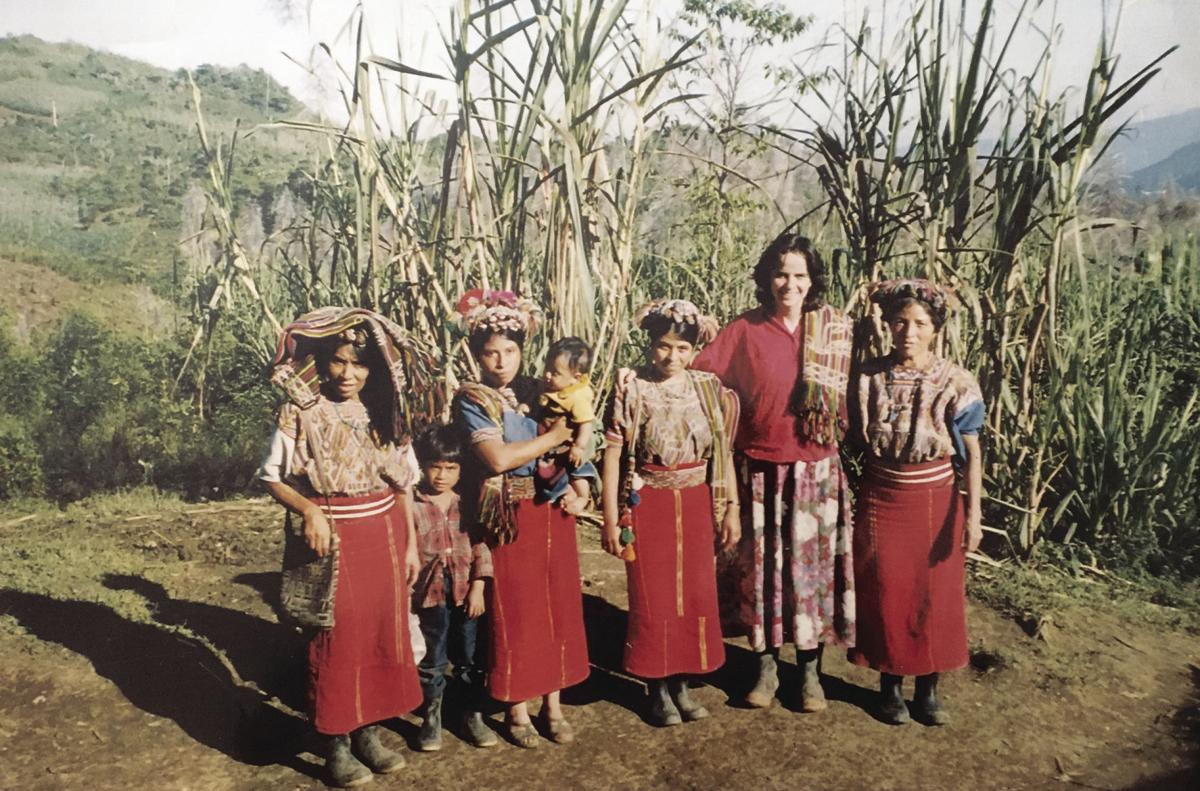 Andrea Walsh (second from right) with a group of women in Guatemala where the couple met and worked together as activists with Witness for Peace in the 1990s. (COURTESY PHOTOS) 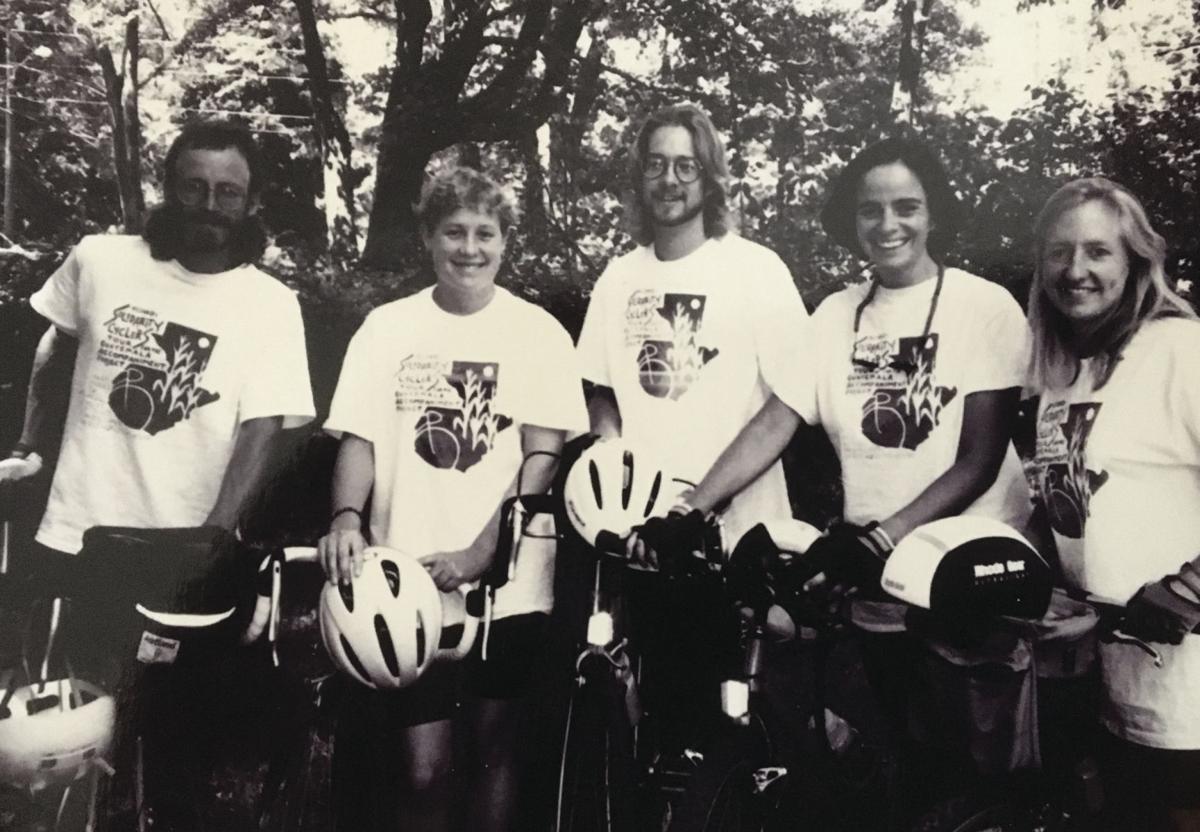 Andy Davis (left) and Andrea Walsh (second from right) stand with friends during a New England bike tour to raise money for a Guatemala project in the 1990s. (COURTESY PHOTO)

Andy Davis and Andrea Walsh with their daughter Fiona at the Womens’ March in Portsmouth in 2018. (COURTESY PHOTO)

Andy Davis (center), stands with Marcos Ortiz and his family in Guatemala, with whom Davis worked in the early 1990s. (COURTESY PHOTOS)

Andrea Walsh (second from right) with a group of women in Guatemala where the couple met and worked together as activists with Witness for Peace in the 1990s. (COURTESY PHOTOS)

Andy Davis (left) and Andrea Walsh (second from right) stand with friends during a New England bike tour to raise money for a Guatemala project in the 1990s. (COURTESY PHOTO)

ALBANY — Andrea Walsh and Andy Davis’ marriage has been a love affair of shared passions and commitments. The co-directors of World Fellowship Center, an intergenerational social justice camp and conference center in Albany, don’t have much of a separation between their personal, work and political lives.

When Andy and Andrea took over the center in 2000, they already had spent years as political activists.

“Neither of us can really imagine being with somebody who didn't have a significant overlay of experience and understanding of the world,” Andy said.

Finishing the thought, Andrea said, “And a certain amount of chutzpah, just like the ability to do long-distance rides or be in long-distance, long-haul social justice work.

"Andy — both of us — did anti-nuclear-power work. Andy was arrested with Seabrook protests and on Central America policy protests.”

The couple met in the early 1990s in Guatemala, where Andy was an activist with Witness for Peace, trying to help refugees who had been driven from their homes during the war in the 1980s, and where Andrea was teaching at a language school in the highlands.

Andy said Witness for Peace's mission was to provide accompaniment to the refugees who were returning to Guatemala, and to share with people in the United States their knowledge of what had happened in Guatemala and the U.S. government’s role in the war.

When they met, Andy said he liked Andrea almost immediately. “I thought she was really cool, and I was really interested; I knew that we would be friends. But I didn't necessarily think beyond that," he said.

Andrea was more cautious, thinking, “This is the kind of guy I could be attracted to, and it wouldn't be a good idea, I could end up hurt. But he was interesting, and he was nice.”

They discovered common themes running through both their lives — a commitment to social justice, and a love of travel and bicycle touring.

Andrea had grown up in a rural Michigan, and had traveled to Argentina and Japan as a teen. She attended the University of Michigan in Ann Arbor, where she had her political awakening.

It was also there that she realized, “I just wanted to get out in the world and not get trapped in a liberal bubble,” which took her at age 29 to Guatemala.

"The non-progressive bubble argument was part of the way I eventually lured her to New Hampshire,” Andy added.

Andy was from New Hampshire. Born in Rochester, his family moved around when he was a child, and by the time he was a young adult, Andy was calling Keene home. There, he worked as a cook before becoming involved in activism and going to Guatemala.

“We would have these international accompaniment meetings, and they were very fiery and conflictive, and Andrea would stand up and say these useful, conciliatory things and try to bring people together.

“I’d been telling people about Andrea, that we should recruit her to come work with us, and people from our team met her at that point and started helping with the recruitment,” he said.

“And then I ended up doing my own personal recruitment.”

Over the course of a year, their friendship blossomed into what Andrea said she thought of as her “Guatemala romance … because I was moving to San Francisco. New Hampshire was not on my radar.”

But, Andy said: “For both of us, our experience of working with Witness for Peace in Guatemala was one of the most important formative experiences in our lives. It, in a very important way, made us who we are today. … I didn't want to imagine just having to translate and explain myself all the time about such an essential part of me.”

“The first thing we did here when we got back together was a 1,000-mile bike trip around New England to raise funds and consciousness for a new Guatemala project,” Andy said.

They settled in Quaker City, a village in western New Hampshire near Claremont, where Andrea got a job teaching Spanish. Andy worked as a carpenter, and they both continued their activist work. It was there that they married in a Quaker ceremony in 1999.

Their framed marriage certificate, signed by more than 100 people and including their personal vows to one another, hangs in a corner of their living room.

Andrea said: “This document we had signed at our wedding, just the committing to be each other's ‘rock and refuge and comfort and entertainment until we die.’"

As with any relationship, Andy said, there have been tough times, but he said “Andrea's capacity for forgiveness has really taught me. Just to think of how we used to fight, and now we have disagreements and our hackles get raised, but I feel like we've almost become adults in the way that we deal with each other.”

Andrea said she has learned from Andy, too — “the value of humor and not taking myself too seriously, because I can be all about the work or the politics or the work of living. I feel Andy’s allowing how great things are is really a gift that he brings every day.”

While living in Quaker City, she said, “We found ourselves saying, ‘Wouldn't it be great if we could bring conferences and people together here and talk about peacemaking and social justice?’

"Shortly after that, two different friends gave us the job description for the World Fellowship Center," Andrea said.

At World Fellowship, she said, “So many things interested us about the place and the politics, the organic gardening, the carpentry, the non-profit ... like we had a lot of experience that could work here.”

Their passion for social justice has obviously been passed down to their daughter, Fiona Davis-Walsh, a 2018 Kennett High School graduate who is now a sophomore at Tufts University in Boston. After the Parkland, Fla., high school shooting, Fiona was part of a group that organized a student walk-out at Kennett.

Working closely together, the couple said one of the secrets of a happy marriage has been having separation as well as doing things together.

“When we first came here, we did everything together. Then it became clear we needed our separate realms as well as working together,” Andy said. "It can be very challenging.

“Andrea has a regular gig right now, visiting detained migrants at the Strafford County Jail,” he said. “I was intrigued by it also. But you know, I have my storytelling" — Andy is a professional storyteller who performs frequently around the region — "so that takes up a lot of time.”

Both also have a deep community involvement. Andy has served on the board of the Arts Council of Tamworth. Andrea is a hospice volunteer. Both are involved with the Unitarian Universalist Fellowship of the Eastern Slopes in Tamworth.

Making it all work is their commitment to each other.

“Andrea always uses this language that I love, that it is our shared commitment to help each other be our best selves,” Andy said.

“It is kind of hopeful, to be in the flawed, imperfect, human relationship, and to make it work over time, over and over again,” Andrea said.