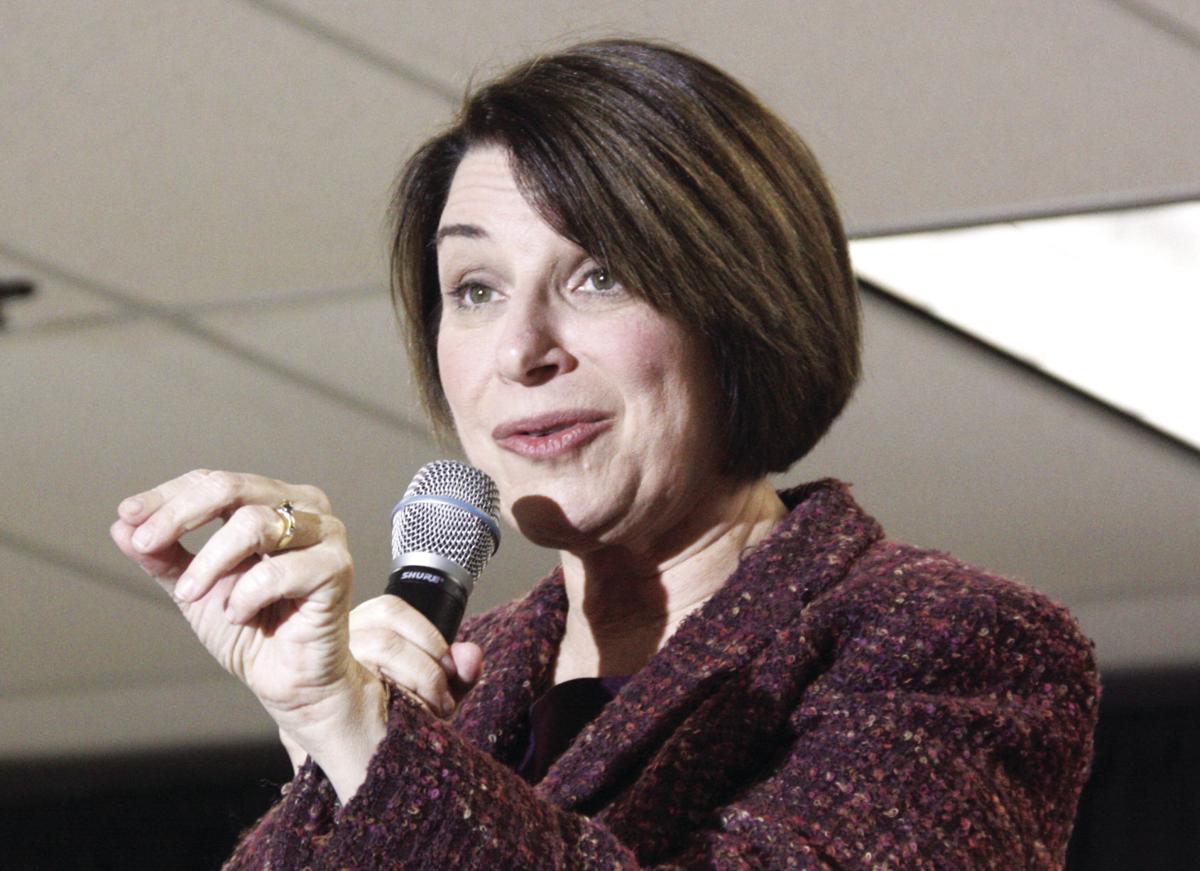 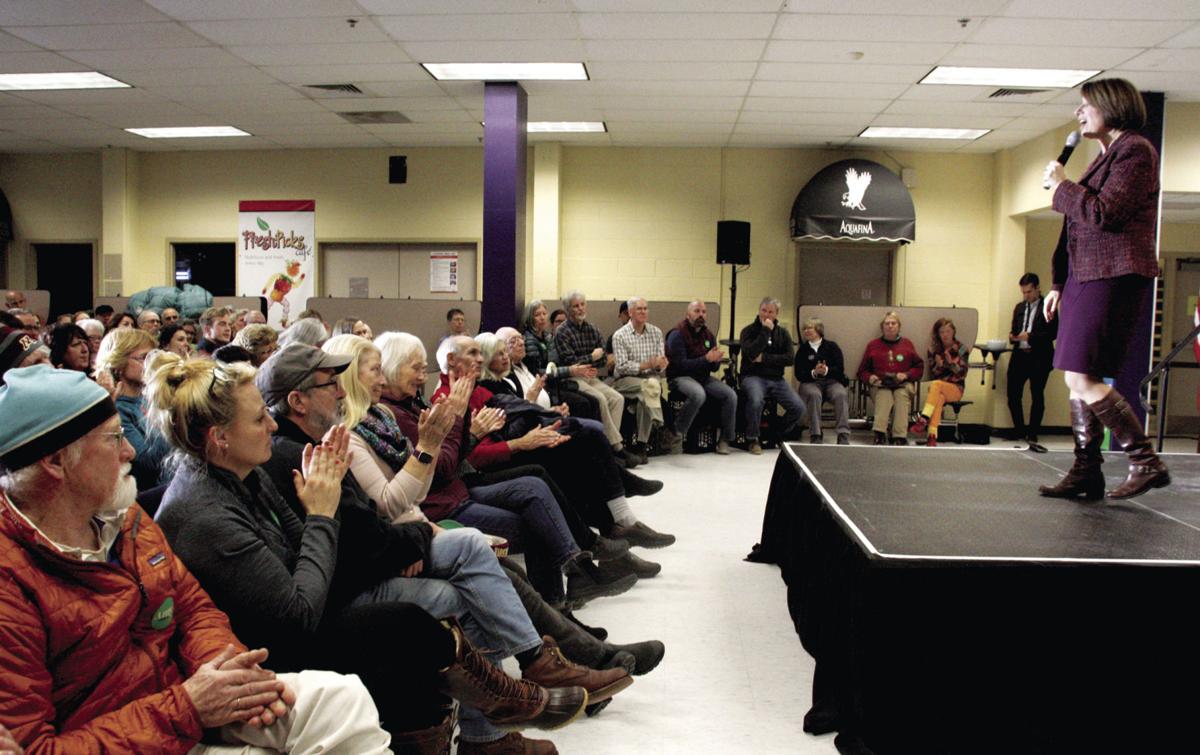 A crowd of about 200 at Kennett Middle School applauds Amy Klobuchar during her campaign speech at the school. (TERRY LEAVITT PHOTO) 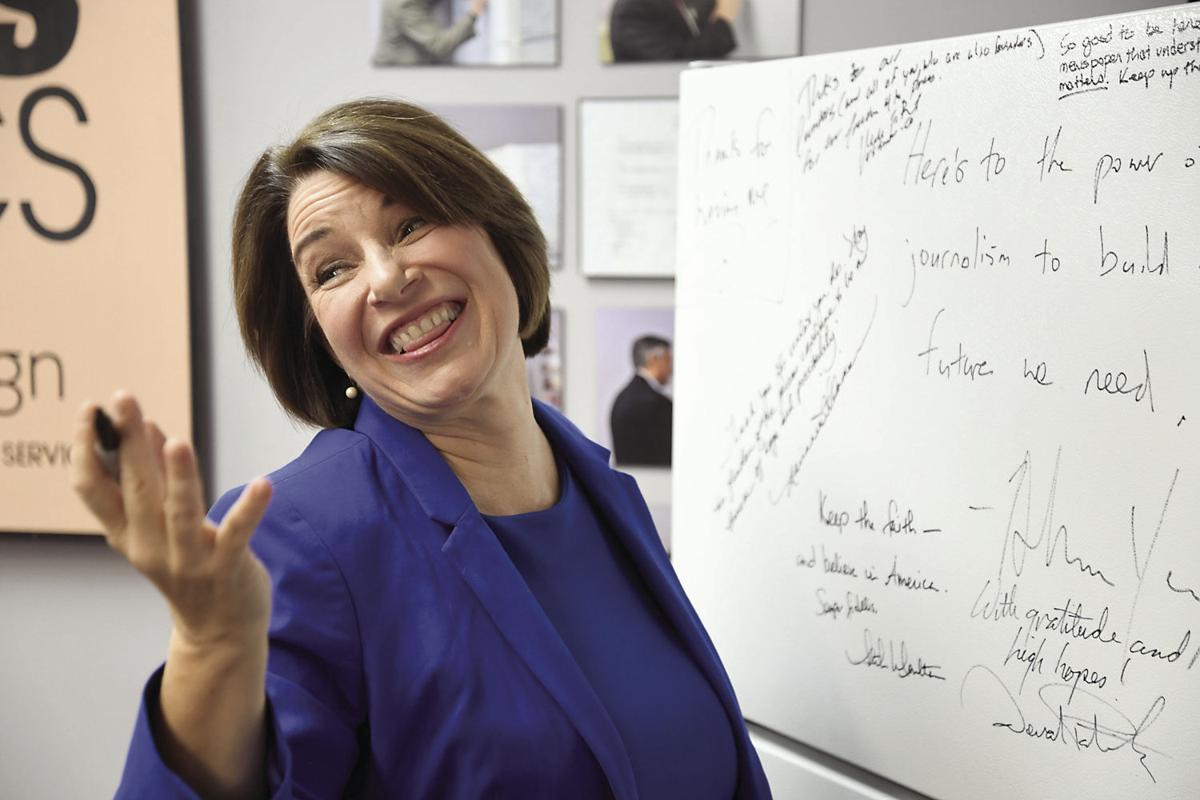 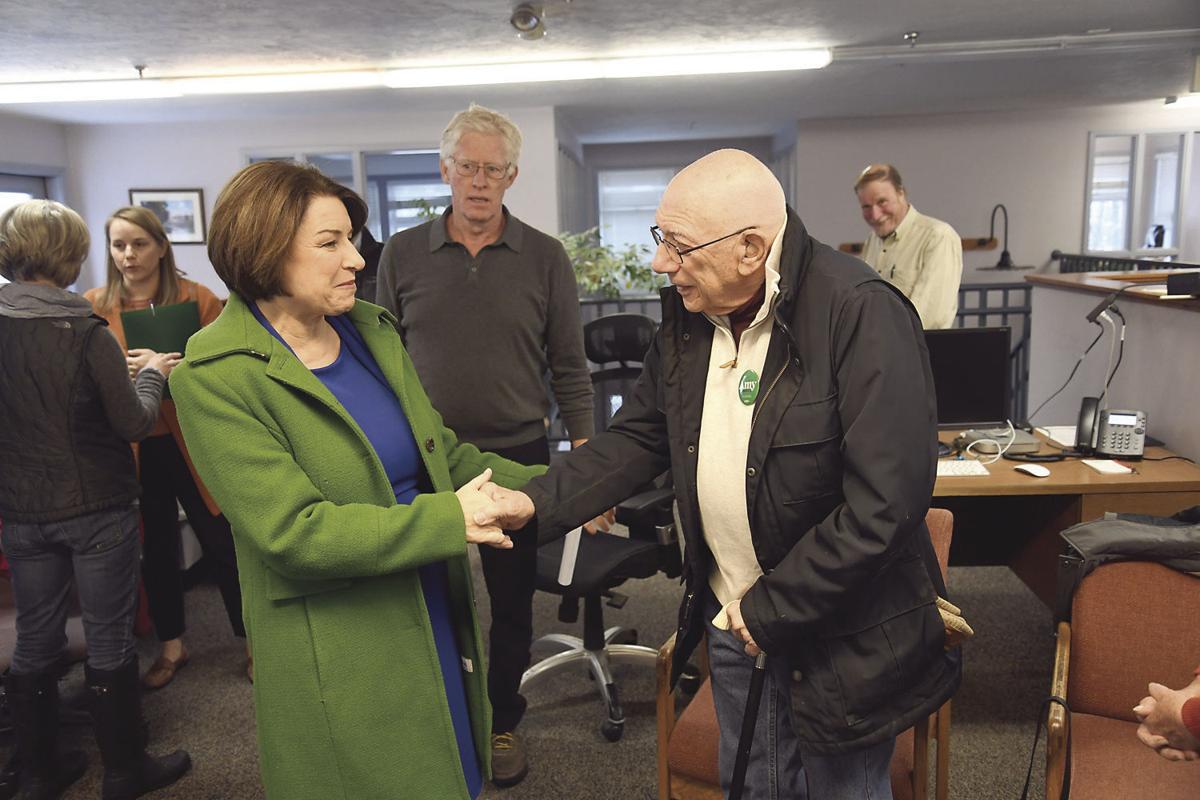 A crowd of about 200 at Kennett Middle School applauds Amy Klobuchar during her campaign speech at the school. (TERRY LEAVITT PHOTO)

CONWAY — Democratic presidential hopeful Amy Klobuchar visited the Mount Washington Valley this week, drawing 200 people to Kennett Middle School for a town hall on Sunday and telling a Conway Daily Sun editorial board on Monday that she is well-positioned to beat Donald Trump in a general election showdown thanks to her moderate Midwestern style of politics and ability to get things done.

The U.S. senator from Minnesota is in a crowded field of Democrats who will be competing in the Feb. 11 New Hampshire Primary. Others include former Vice President Joe Biden; South Bend, Ind., Mayor Pete Buttigieg; and fellow U.S. senators Bernie Sanders of Vermont and Elizabeth Warren of Massachusetts. Billionaires Tom Steyer and Michael Bloomberg and entrepreneur Andrew Yang are still in it, as well as Cory Booker, John Delaney, Marianne Williamson, Deval Patrick and Tulsi Gabbard.

In an editorial board that was live-streamed on the Sun’s Facebook page on Monday morning, Klobuchar said that while Trump captured Midwestern states like Pennsylvania, Michigan, Wisconsin, Ohio and Iowa in 2016, Democrats came “roaring back” in the midterm elections of 2018.

“I can appeal to independents, too,” she said, reminding the room that Minnesota was the state that voted professional wrestler Jesse Ventura into office as governor.

Klobuchar said she was the first woman elected to the Senate from Minnesota and can win in areas where there’s a strong conservative presence.

“I’m from the middle of the country, where I can win with steel workers in northern Minnesota and with farmers,” said Klobuchar.

Asked by Managing Editor Margaret McKenzie what her foreign policy stance was, Klobuchar boiled it down to “the five Rs”: Reassert our values overseas, repair relationships with the rest of the world, re-enter nuclear agreements, respond to threats and, lastly, return to sanity.

She added that as head of the tourism caucus, “I have worked hard at getting funding and doing things like bringing in more international tourists that spend an average of $5,000 every time they come here.”

She also supports a trade deal called the United States-Mexico-Canada Agreement. She would not have moved troops from the Syrian border with Turkey like Trump did. She calls her foreign policy a “return to sanity.” She also wants to tackle climate change and restoring U.S. relations with allies.

Asked by editor Lloyd Jones about her proudest accomplishments, Klobuchar said two immediately sprang to mind: securing funding to rebuild in 13 weeks an eight-lane bridge in Minneapolis that collapsed into the Mississippi River in 2007; and passing a bill as a junior senator that mandated safer public pool drains after a little girl, Abigail Taylor, was mortally injured in a pool drain-related accident. Since the bill passed, there have been no more swimming pool drain deaths, Klobuchar said.

“You know, there are many examples of things like that,” said Klobuchar. “They seem little, but they matter. And they show, you know, a perseverance in getting things done. That matters in a president.”

As president, Klobuchar said she would embark on an ambitious 100-day plan, naming as priorities being able to import prescription drugs from countries like Canada to reduce costs and taking executive action to prevent domestic abusers from possessing guns.

Regarding the Affordable Care Act, Klobuchar said she would strengthen it and protect people with pre-existing conditions.

“I figure as we’re in a place that has a lot of lakes and rivers, if you want to cross a body of water, you build a bridge, you don’t blow one up,” said Klobuchar. “And that’s why I disagree with a lot of my colleagues who basically want to blow up the Affordable Care Act. I certainly disagree with the president, who is the worst.”

Klobuchar said that a Medicare For All bill would kick nearly 150 million people off their private health insurance in four years.

She also vowed to fight addiction if elected and added the fight is personal because her journalist father struggled with alcoholism. She said he is now in recovery and is in assisted living at age 91.

“That’s why I believe in my heart as well as my head, that people should have access to treatment,” she said.

Sun Publisher Mark Guerringue asked Klobuchar about how she felt about being portrayed on “Saturday Night Live” and asked if she tried to moderate her mannerisms to avoid being fodder for the show.

Klobuchar, in her response, alluded to a show’s gag about her bangs being a distraction.

“I did make sure that they didn’t have air vents aimed at the candidates for the next debate,” said Klobuchar, noting that Rachel Dratch, who portrayed her having a bad hair day at the debates, first played her during the Kavanaugh hearings.

At Sunday’s town hall meeting, Klobuchar was introduced to the crowd by state Rep. Susan Ticehurst (D-Tamworth), who said Klobuchar had an “incredible record” of having 100 bills passed.

During the town hall, Klobuchar read aloud a few written questions from audience members. “Chris from Glen” asked how she would “restore honor and dignity to the presidency” and if she would tweet.

“I will probably use Twitter because you want to have a modern presidency and a way to reach people, but I will not do mean tweets,” said Klobuchar, adding that Trump keeps the political reporters busy with tweets at all hours.

She was asked about immigration reform both at the town hall and by a Sun viewer who posted a question during the live Facebook feed on Monday.

Klobuchar said there is a way to do immigration reform in a fiscally responsible way that would reduce the deficit by $158 billion over 10 years. She said this plan would also allow for needed workers to come to the U.S.

Back in October, the Sun asked Klobuchar if she was familiar with New Hampshire man David Fravor, who was made famous in 2017 for his account of chasing a UFO off the West Coast as a U.S. Navy fighter pilot in 2004.

During that exchange in front of The Met Coffee House in North Conway, Klobuchar said she would look into it and on Monday she confirmed that she did.

“I think we don’t know enough ... I don’t know what’s happened, not just with that sighting, but with others,” she said. “And I think one of the things a president could do is to look into what’s there in terms of what does the science say; what does our military say.

“Here’s the interesting part of that answer is that some of this stuff is really old ... So, why can’t you see if you can let some of that out for the public so earnest journalists like you who are trying to get the bottom of the truth would be able to see it?” she asked rhetorically.

Asked which three people throughout history she would like to have dinner with, she replied Abraham Lincoln, Barack Obama (“a recent example of dignity and decency in the White House”) and Eleanor Roosevelt.

Following the ed board, she and her campaign staff hit the road again, heading up to Gorham for a town hall meeting at the Medallion Opera House.

For more, go to amyklobuchar.com.