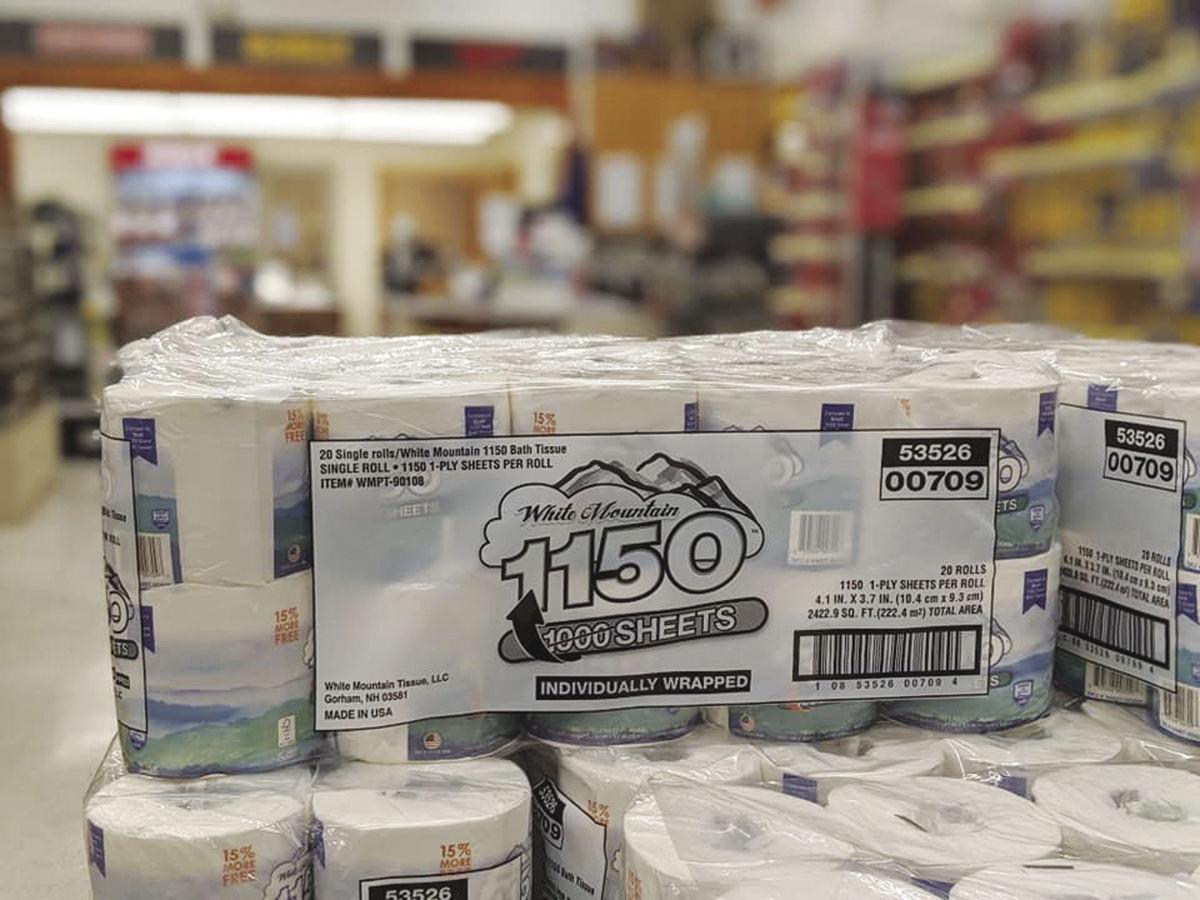 Gorham Paper & Tissue made some of its White Mountain bath tissue available to employees and local stores. The parent rolls are made at the Gorham mill. White Mountain Lumber Company Co-Owner Mark Kelley said toilet paper continues to fly off the shelves. (BARBARA TETREAULT PHOTO) 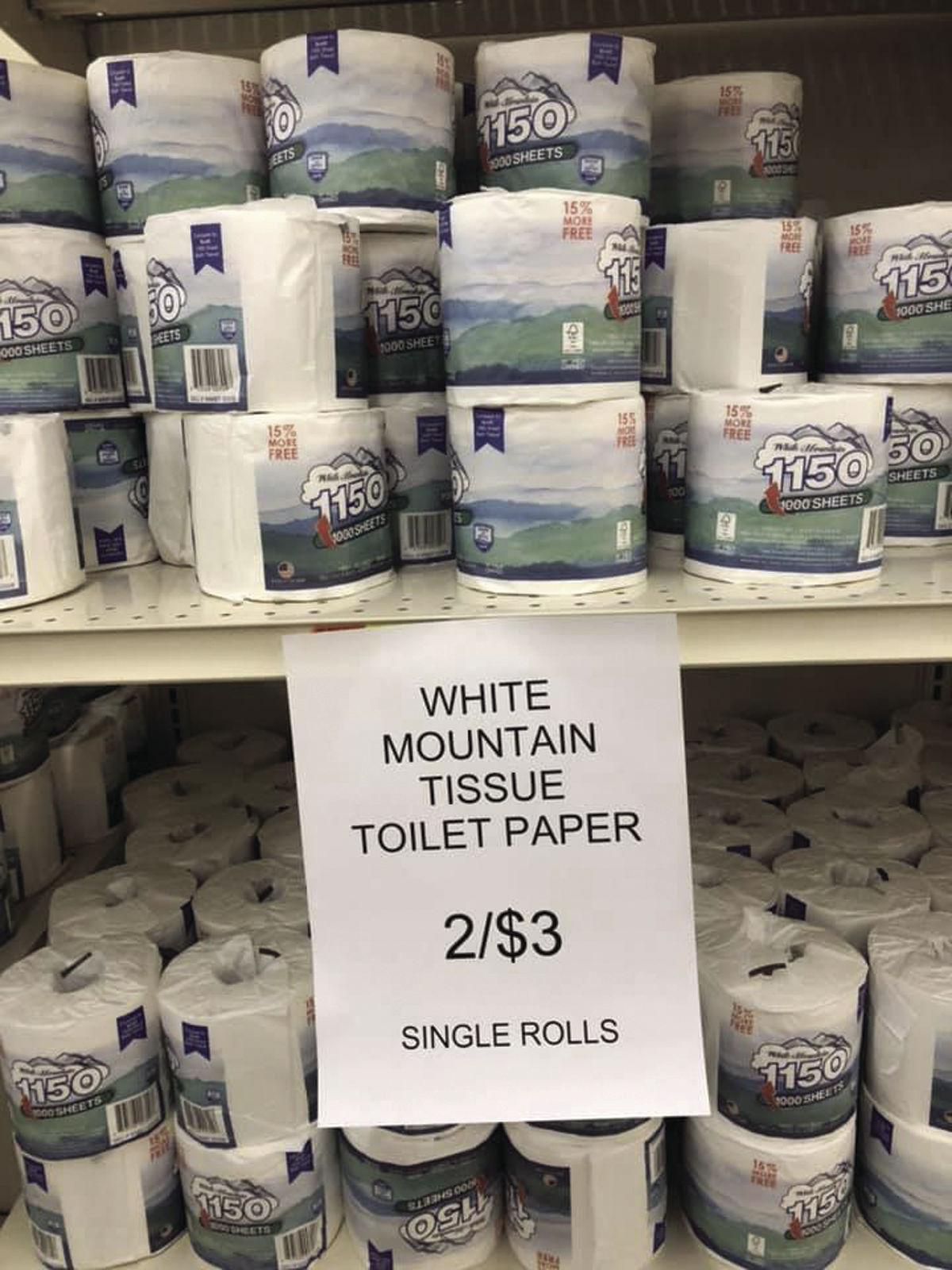 The Berlin Marketplace was selling White Mountain tissue by the roll. The Berlin store was one that received a supply of the toilet paper from Gorham Paper and Tissue mill in Gorham. (BARBARA TETREAULT PHOTO)

Gorham Paper & Tissue made some of its White Mountain bath tissue available to employees and local stores. The parent rolls are made at the Gorham mill. White Mountain Lumber Company Co-Owner Mark Kelley said toilet paper continues to fly off the shelves. (BARBARA TETREAULT PHOTO)

The Berlin Marketplace was selling White Mountain tissue by the roll. The Berlin store was one that received a supply of the toilet paper from Gorham Paper and Tissue mill in Gorham. (BARBARA TETREAULT PHOTO)

ANDROSCOGGIN VALLEY — Toilet paper has been a hot commodity since the hoarding began in anticipation of long home stays during the coronavirus outbreak.

Local stores have struggled to keep up with the spike in demand.

But stepping in to help out, Gorham Paper and Tissue has made its White Mountain Tissue available to its employees as well as to local stores in Coos County.

Mark Kelley of White Mountain Lumber said they normally carry a small supply of toilet paper at their ACE Hardware Store for customers.

However, with the demand spurred by COVID-19, Kelley said he decided to reach out to an old contact at Gorham Paper to see if the mill could possibly help out.

Chief Financial Officer Wayne Johnson said the mill had a limited supply of its packaged White Mountain Tissue. The mill produces the large parent rolls of the tissue on the $35 million tissue machine that came online in 2012 and the parent rolls are sent out to be converted into individual rolls.

Johnson said the company’s first priority was to make sure its employees were supplied.

“But then, we wanted to offer the White Mountain bath tissue to local businesses to help our community. As you can imagine during this uncertain time, the response has been very good," he said.

"In addition to what was in our limited inventory, we are also reaching out to tissue converters to see if they have capacity for us to produce additional White Mountain bath tissue that we can distribute in the community.

Gorham Paper employee Mitchell Thayer said: "I enjoyed getting to take home a product that I had a hand in making. It reminds me that the tissue we send out the door doesn't just disappear, it goes to real people.”

Kelley said the first trailer load of White Mountain Tissue arrived at his store last Thursday afternoon. He said he called around to see if local institutions were in need and that some of the load was set aside for Androscoggin Valley Hospital.

As the toilet paper was being unloaded, Kelley said a corrections officer driving by the store immediately stopped and asked if it was for sale.

The store received a second, much larger load later on Friday, and again it was flying off the shelves despite a limit of one package per customer.

“I’ve just had one customer after another,” said Kelley, as the news that there was toilet paper spread on social media.

He estimated half the customers had never been in the store before and said he hopes many will return now that they see what the store offers.

Kelley said he likes being able to sell a local product and especially one sharing the name “White Mountain.”

Johnson said the Gorham mill is running full at this time and that it is staying up-to-date on the CDC recommendations and implementing controls to limit exposure to COVID-19.

“We are taking the situation seriously and are focusing on the health and well-being of our employees and their families, our suppliers, customers, visitors and the community,” he said.

No offense to our northern neighbors in Canada but it is hard to believe this region needs to import TP from there considering the paper mills in Maine and New Hampshire and abundance of trees.