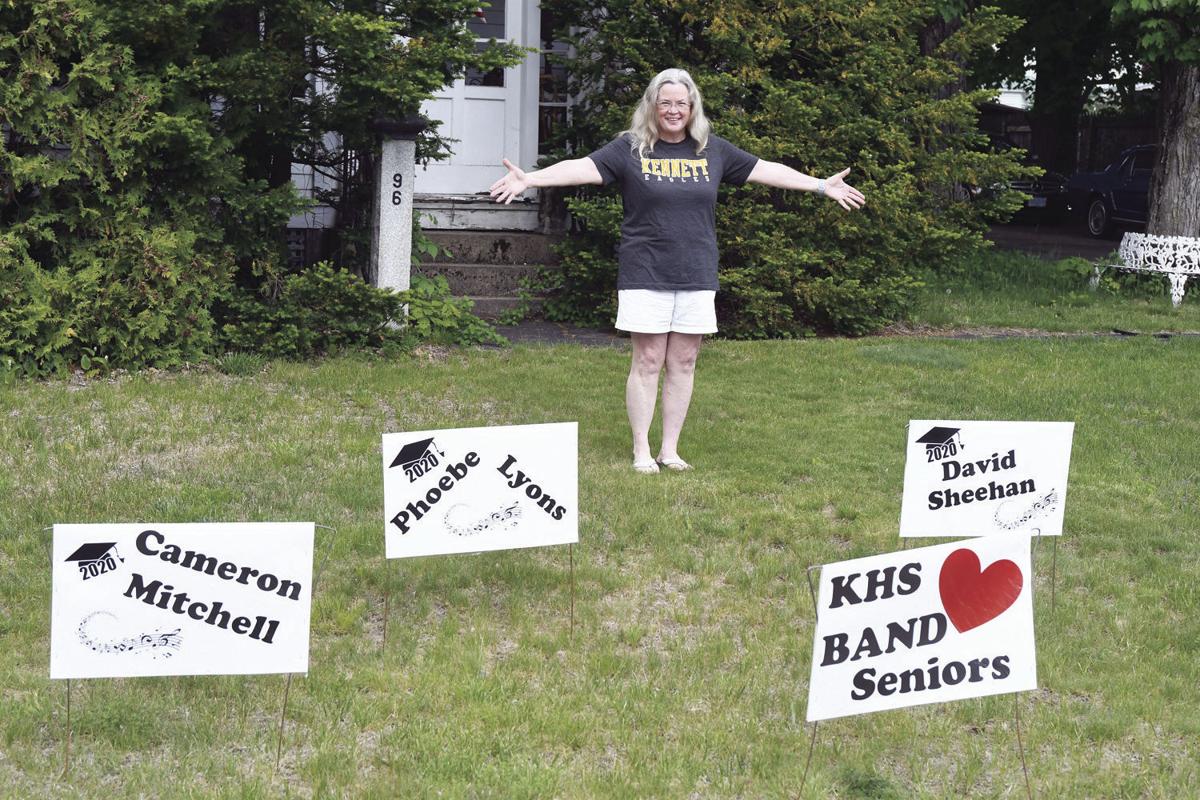 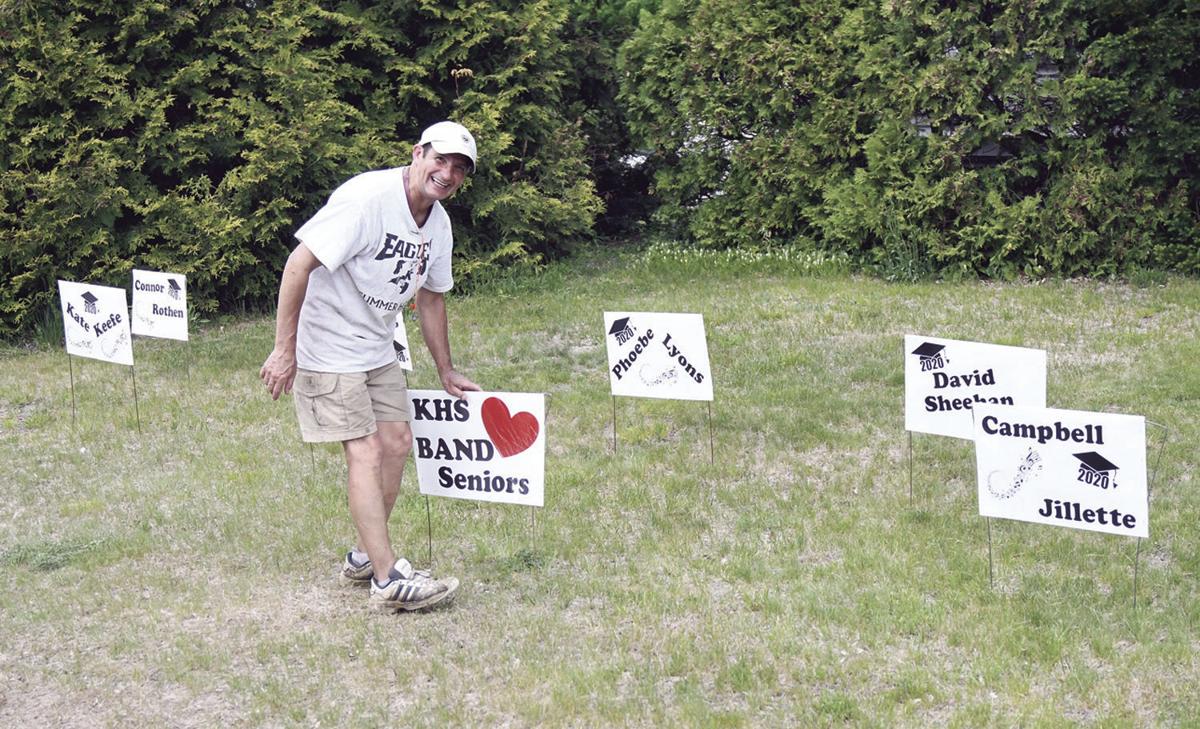 Dr. Therese Davison honored her senior music students at Kennett High School by creating and placing signs of each of them on her front lawn on Main Street in Conway. Here, Randy, her husband and an educator in MSAD 72, puts up the signs. (LLOYD JONES PHOTO)

Dr. Therese Davison honored her senior music students at Kennett High School by creating and placing signs of each of them on her front lawn on Main Street in Conway. Here, Randy, her husband and an educator in MSAD 72, puts up the signs. (LLOYD JONES PHOTO)

CONWAY — It wasn’t the way Dr. Therese Davison hoped the school year would end for her music students at Kennett High School.

The Eagles traditionally close out the year by performing a variety of songs at graduation day.

Davison, dean of the Kennett High faculty, serving 27 years as the director the music department, looks forward to celebrating her seniors.

“Things happened so fast, one day we were in school, and the next we were told we were going remote,” Davison said recently from her home on Main Street in Conway.

The annual KHS Drumline concerts were cut short, with just two of the scheduled four performances taking place prior to the COVID-19 pandemic.

In fact, the March 14 show “To Catch a Drum Thief” was the last activity held on campus before remote learning went into effect for the remainder of the school year.

But with a slight tweak in tradition, Davison kept her streak of recognizing her seniors alive. Each year, she would place signs along the road into the high school listing each student’s name. Though unable to do that, Davison designed her own signs and placed them on her front lawn.

“I had to find a way to honor them,” she said. “It’s a pretty special group.”

Davison has been working on a video with almost all of the band students (more than 65 members) playing the Kennett Fight Song — “Glory to Kennett.” She has been working with Valley Vision (Channel 1301) Station Manager Bill Edmunds to mesh everyone into one video se to air Friday night (June 12) as part of the remote graduation celebration.

“I was a little nervous. I'm like, I hope it comes out OK, but we’re going to use it for graduation. It's going to come out strong,” Davison said.

“It’s a lot of work, a lot of video recordings,” she said. “It was one thing when we thought it would only be a couple of weeks, but when it turned out to be a third of the school year, we had to get very creative.”

The students have had to turn in a lot of videos to be assessed on their musical progress.

“Every now and again, students come along who demonstrate an outstanding, singular devotion to excelling in music on an instrument of choice. This year is one of those years. The KHS Music program is pleased to present tenor saxophonist Cole Schneider with a Musicianship Award,” she shared.

“This award is given to the graduating senior who demonstrates an excellent attitude as a contributing member of the band,” said Davison. “It is often but not always given to someone who plays low brass because there is generally a shortage in this section of the band. In addition to the plaque, the recipient receives $100 in cash from the Mills family. The music program is pleased to announce this year's recipient, cellist and trombonist Julian Brochu."

“Many in the Mount Washington Valley will remember Jean Fickett, a positive music educator who worked hard for students of Conway and the surrounding area for over 30 years,” Davison said.

“Jean would often be seen in her Kennett knit cap playing in the pep band at home football games in addition to her regular teaching assignments. The Jean Fickett Eagle Spirit Award is given each spring to a student who exudes the positivity Jean modeled so well. Band President Phoebe Lyons would have made Jean proud and is the 2020 recipient.”

The National Director's Award for Band goes to Chloe Armstrong.

“This year's recipient is in Concert Band for all the right reasons,” Davison said. “She works to improve her playing skills while placing great importance on her love of creative expression through music. As president of our National Tri-M Music Honor Society, she demonstrated the values held most sacred to our music program, namely service through music. Please congratulate saxophonist Chloe Armstrong.”

The National John Philip Sousa Award for Band was presented to Kate Keefe.

“It was introduced in 1955 to honor top students in high school bands across the country. It is intended to recognize students who possess superior musicianship and outstanding dedication. It was created with the approval of Helen Sousa, Albert and Priscilla Sousa, the famous bandmaster and composer's daughters. This year, we recognize flute player Katherine Keefe.”

“This was created in 1974 with the consent of his widow shortly after this immeasurable jazz artist died in 1971,” said Davison. “It honors the most outstanding jazz musician at each high school across the country. This year's recipient has a passion for New Aage jazz in compound complex meters and is master of the largest listening library in the history of Kennett music students. Congratulations to drummer Cameron Mitchell.”

The Semper Fidelis Award was presented to Campbell Jillette and Abby Lyman.

“Each year, the Semper Fidelis award is presented to a student who displays traits that the Marine Corps considers essential to being a good leader: endurance, knowledge, unselfishness, dependability, enthusiasm and loyalty,” Davison explained.

“Award recipients are not necessarily the most outstanding musicians, but rather a student whose leadership qualities have contributed to the success of the band program. The ‘Semper Fidelis’ award for musical excellence is presented by the United States Marines Youth Foundation Inc. and the Marine Corps League in recognition of diligence, dedication and musical excellence as a performing high school bandsman and soloist. This year's Kennett High School recipients are Campbell Jillette and Abby Lyman.”