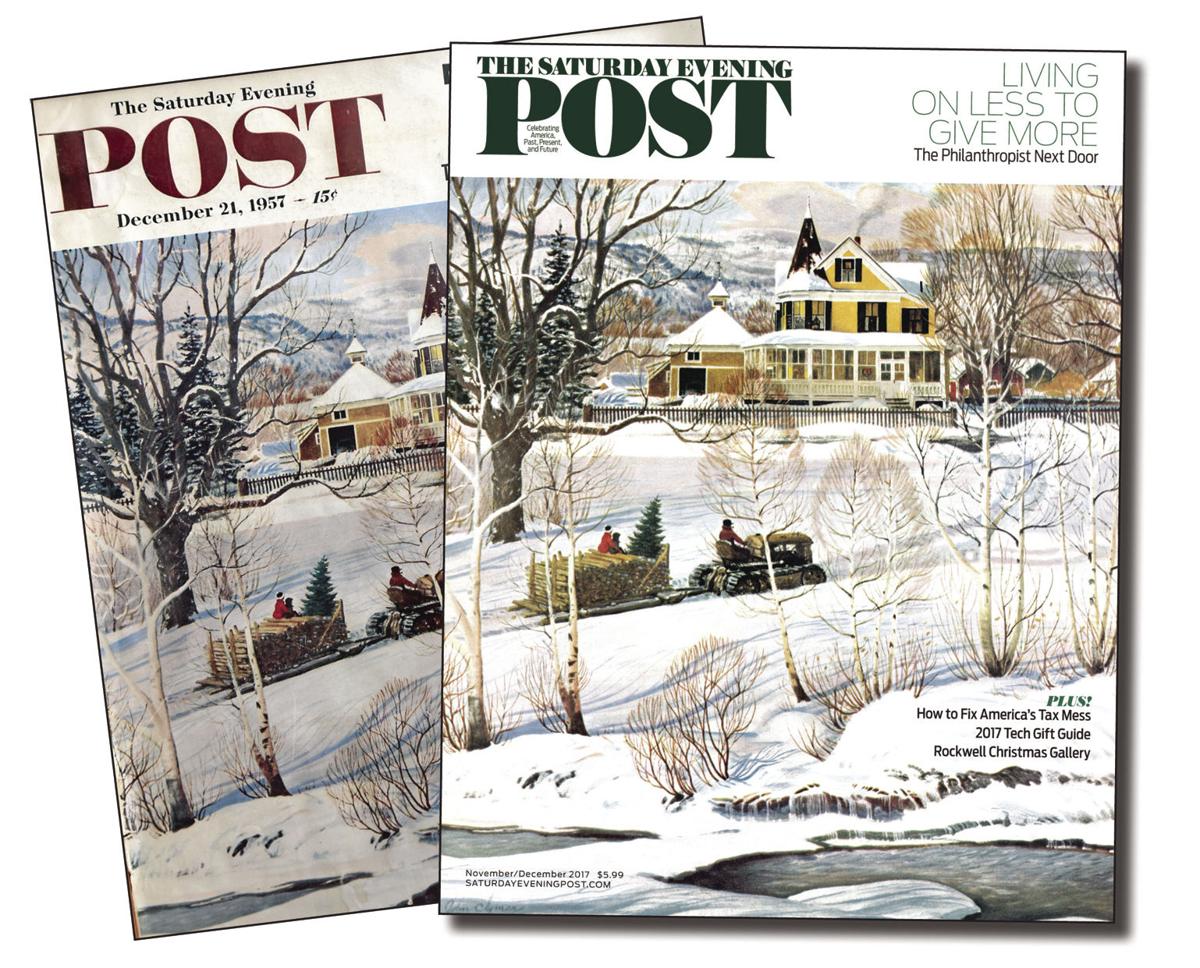 The Saturday Evening Post reused the painting of the Gibson-Woodbury home in North Conway (top magazine) 60 years after it first ran in 1957 (bottom magazine). (COURTESY PHOTOS) 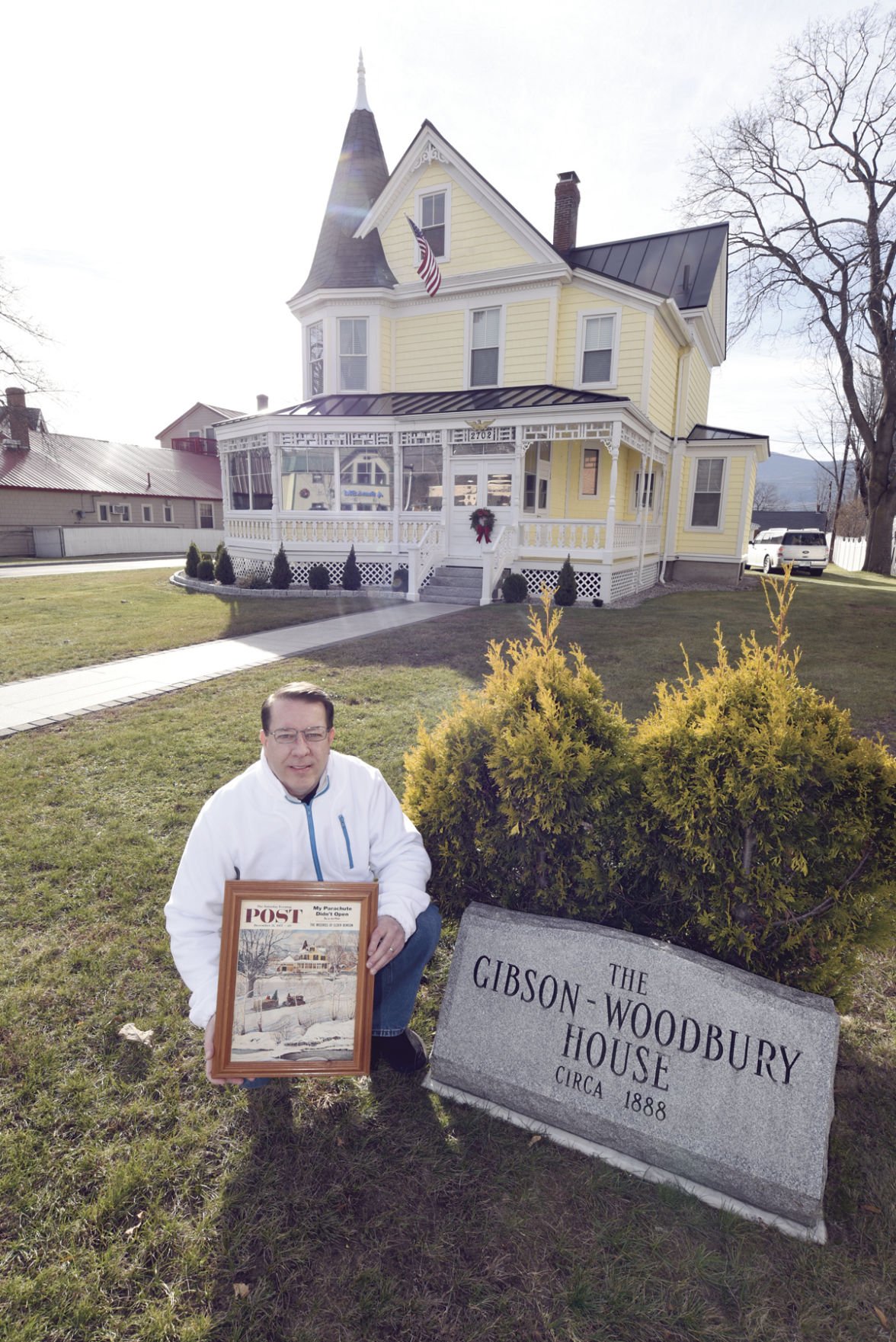 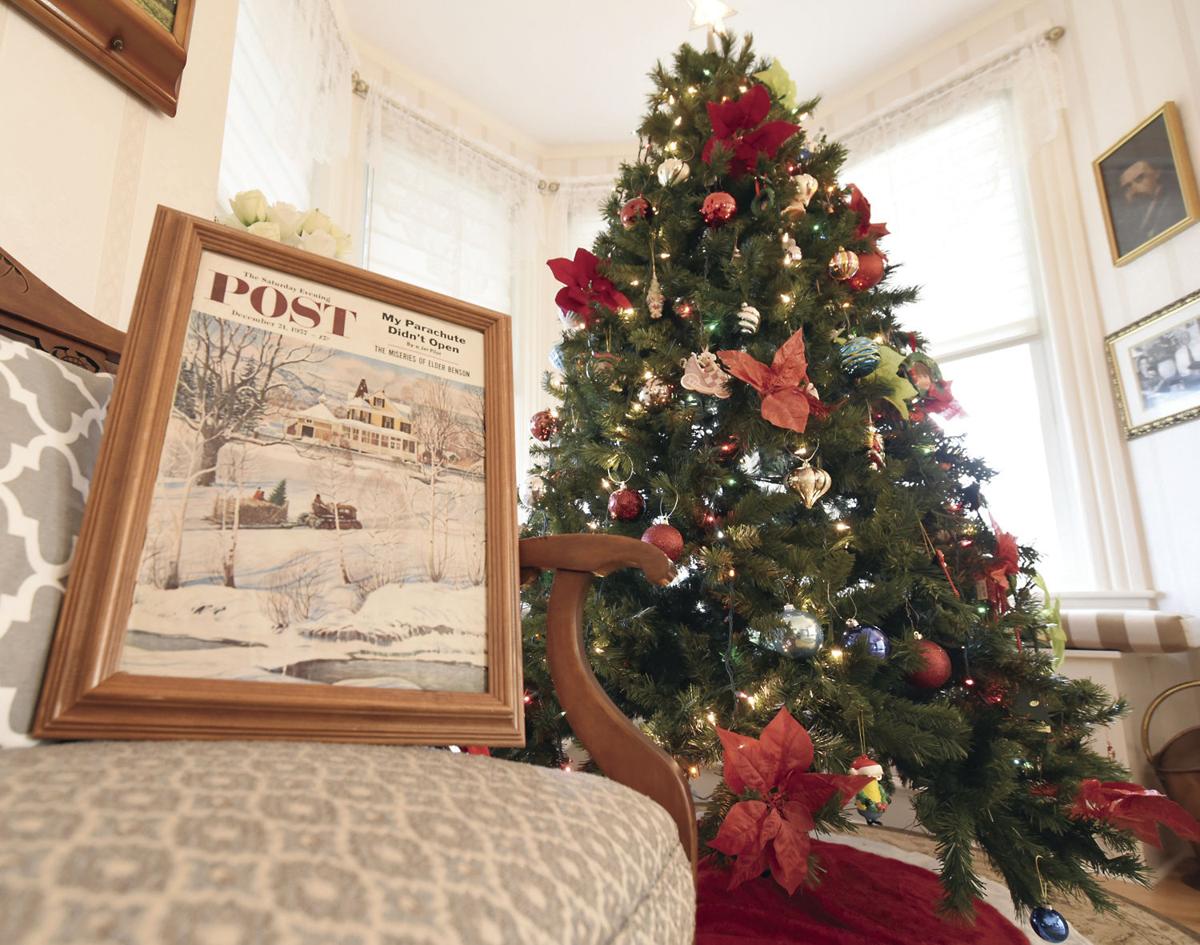 A framed copy of the original Saturday Evening Post cover sits next to the Christmas tree inside the Gibson-Woodbury home, a private residence in North Conway. (JAMIE GEMMITI PHOTO)

The Saturday Evening Post reused the painting of the Gibson-Woodbury home in North Conway (top magazine) 60 years after it first ran in 1957 (bottom magazine). (COURTESY PHOTOS)

A framed copy of the original Saturday Evening Post cover sits next to the Christmas tree inside the Gibson-Woodbury home, a private residence in North Conway. (JAMIE GEMMITI PHOTO)

CONWAY — As timeless today as it was in 1957, when it first appeared on the cover of The Saturday Evening Post, North Conway's Gibson-Woodbury home is back on the cover of the national magazine this month.

The house today is the home of Mark and Victoria Butterfield, relatives of the Gibsons and Woodburys.

The November-December issue of the Indiana-based magazine is graced with an illustration of the yellow home, painted 60 years ago by John Clymer for the Post’s Dec. 21, 1957, edition. In the background, one sees the barn and the Moats.

A contemporary of frequent Post illustrator Norman Rockwell, Clymer used a bit of artistic license as he depicted a farmer, with wife and child, hauling a Christmas tree and cord wood to the 19th century home. Instead of the appliance store and Lyman's Shell Station that would have been in the foreground, Clymer painted a stand of birch trees. Today, the Frontside Grind and Toy Chest are located across the street from the yellow house.

So how — and why — did the 60-year-old painting get a Post cover reprise. Executive Editor Patrick Perry took time to explain in a phone interview from the magazine's Indianapolis headquarters.

“We were looking for something that was wintry — and we liked the image of the house along with the ‘bringing home the Christmas tree’ in the foreground,” Perry said. “We had several options from our archives, including a few by Norman Rockwell, who was a contemporary of Clymer’s and many of our other ‘narrative’ artists.

“Narrative” was a school of American artists that offered a glimpse of American life usually built around timeless themes such as growing up, holidays such as Thanksgiving and Christmas.

“They are images that tell an entire story, but which the viewer responds to and which gives them that story in two or three seconds,” said Perry.

For the Dec. 21, 1957 cover, the magazine provided the following information about the painting and the artist:

“Now the days hurry toward the nicest day in the year. Or, if you’re very young, maybe you regret the way they don’t hurry. Anyway, life now feels like Christmas — everywhere is the sound of carols, the scent of fresh-cut evergreens, the sight of holly wreaths and read bows, and the warmth of smiles on people’s faces and in their hearts. On the cover, Christmas is coming to the White Mountains and white valleys of New Hampshire. Papa has been out for some cordwood to make the home fires merry, and that extra return-trip passenger is a merry yule tree. In prospect is one of those white Christmases that most northerners prefer — a minority would settle for green palm trees beside a blue, blue sea. John Clymer certainly can paint clear, cold air, can’t he?”

According to Perry, Clymer painted 80 covers for the magazine.

But Perry was unaware of the identity or location of the Gibson-Woodbury House until told about it by a reporter. He welcomed the information, though he noted that as a Midwesterner, he'd never heard of North Conway. But then, people don’t ski much in Indiana, right?

Perry said the magazine moved to Indianapolis from Philadelphia in 1970 "and we’ve been here ever since.”

From its founding in 1821, The Saturday Evening Post grew to become the most widely circulated weekly magazine in America. It published current event articles, editorials, human interest pieces, illustrations, poetry, cartoons and stories by the leading writers of the time.

“It was known for commissioning lavish illustrations and original works of fiction. Illustrations were featured on the cover and embedded in stories and advertising. Some Post illustrations became popular and continue to be reproduced as posters or prints, especially those by Norman Rockwell,” notes Wikipedia.

Curtis Publishing Co. stopped publishing the magazine in 1969 after the company lost a landmark defamation suit and was ordered to pay over $3 million in damages.

But the Post was revived in 1971 as a limited circulation quarterly publication. And as of the late 2000s, it is published six times a year by the Saturday Evening Post Society, which purchased the magazine in 1982.

Its circulation is now 305,000, according to Perry. It is published six times a year, both online and in print via subscription.

“We offer a mix of fiction, humor and topical features that concern Americans, such as science, medical breakthroughs, free speech and civil discourse,” said Perry when asked about the magazine. “It’s a mix of general interest. We also revisit eras from our archives to see what perspectives were in real time on such topics as banking.”

According to local historian Bill Marvel, the Gibson-Woodbury House was built by George A. Wagg of the Maine and New Hampshire Granite Co. in 1888, and acquired by James Gibson in 1894.

According to Butterfield: “Harvey lived here for a year after his family moved from their home on Artist Falls Road after his father bought this house in 1897. Harvey attended Fryeburg Academy by rail — his father was the station agent at the Maine Central’s Depot Street station. He left for Bowdoin College in 1898."

Inside the home, next to the family Christmas tree, hangs a portrait of Gibson (1882-1950), painted by Clymer, was a friend of Gibson’s.

Gibson inherited the home from his parents in the early 1930s. He gave it to nephew Wendell Woodbury after Gibson purchased a large white Victorian down the street in 1929 to serve as his and his wife Helen's summer home.

That building is now the Gibson Center for Senior Services.

Butterfield moved into the big yellow house to care for his aunt following Wendell Woodbury’s death in 1993. He and Victoria were married in 2003. Evelyn died in 2010, after which the Butterfields acquired the home.

When told of the recent Saturday Evening Post cover, Butterfield was elated, saying he has a framed copy of the original 1957 cover.

“My Uncle Wendell wanted to buy the original from the Post, but they wouldn’t sell. But we do have his framed copy,” said Butterfield.

“I’ve got Time magazine cover stories about how Harvey led the food relief efforts in New York City during the Depression in the early 1930s, with a photo of him serving the millionth New Yorker a meal,” Butterfield said of the man who went on to the American Express Co. before becoming New York City’s youngest bank president at the age of 34.

As Gibson recounted in his autobiography, his interest in developing Cranmore and buying the former Hotel Randall was to stimulate North Conway’s then-sleeping winter economy. He quietly bought the west face of the mountain in January 1937 and acquired the Hotel Randall in July 1937, renaming it Eastern Slope Inn and announcing it would henceforth be open for winter use.

He rented Carroll Reed’s rope tow and had it moved from Jackson for the first season of Cranmore’s operations, opening in January 1938.

Gibson next hired local mechanic/inventor George Morton to come up with a ski lift — he came up with the Skimobile, opening the Lower Skimobile in December 1938.

As ski historians well know, that resulted in the Schneider family’s much-photographed arrival in North Conway’s Schouler Park in February 1939, where they were greeted by hundreds of townspeople, including young skiers from the Eastern Slope Ski Club’s Junior Ski Program, who formed an arch of ski poles, under which passed the Schneiders, Gibson and Austrian ESSC director Benno Rybizka.

They were led to the Grove Street home that Wendell Woodbury had acquired for them at Uncle Harvey’s directive.

The rest, as they say, is ski history — being celebrated this 80th season by Cranmore Mountain Resort.

Those images are at the core of North Conway’s skiing heritage, and the Gibson homes are part of it.

In 2010, with Butterfield’s help, the Gibson-Woodbury Charitable Foundation was created by Evelyn Smith Woodbury in honor of her late husband and Harvey and Helen Gibson.

Butterfield serves as executive director for the non-profit foundation whose purpose is to “enhance the vitality and wellness of all Mount Washington Valley residents through charitable giving to established non-profit organizations,” primarily causes that aid children.

For example, it supported the construction of the new North Conway Community Center in 2015 and has played a key role in redeveloping the 1950-built former community center into the New England Ski Museum’s Eastern Slope Branch, set to open in early January.

The original North Conway Community Center building was built in honor of Gibson by his family.

Today, in front of the Gibson-Woodbury home is a plaque, erected by Butterfield in honor of his late relatives.

“Every so often, someone comes and knocks on the door and wants to know if it’s a museum, or whether it's a bed-and-breakfast and whether they can rent a room. I tell them they’re not the first to ask that question, and probably not the last,” laughed Butterfield.

It’s a home that typifies the heart of North Conway Village, whether during the holidays or at any time of the year — and now, thanks to The Saturday Evening Post, a Christmas keepsake once more, adorning coffee tables nationwide.