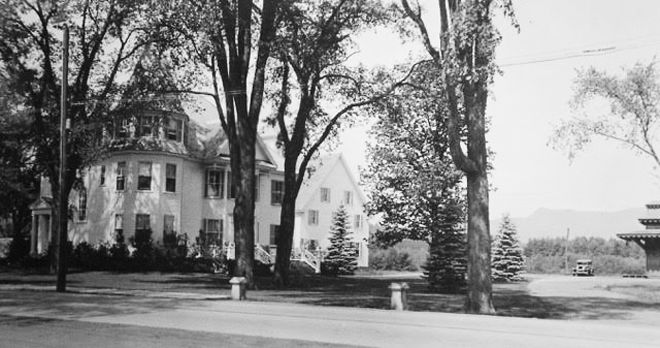 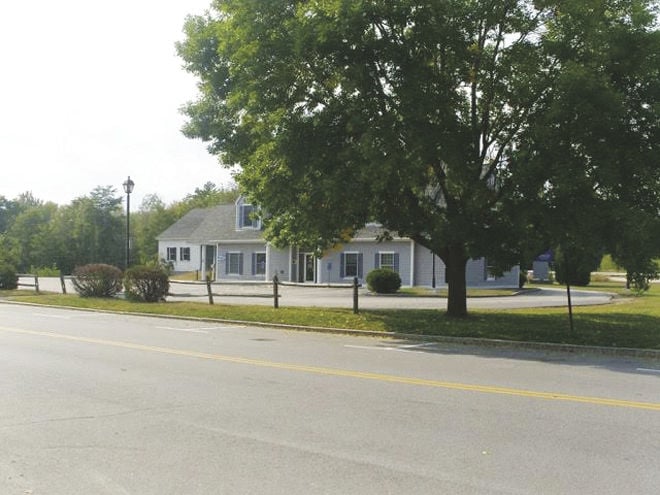 The same site today; with the Kennett barn peeking from behind the bank (WILLIAM MARVEL PHOTO).

The same site today; with the Kennett barn peeking from behind the bank (WILLIAM MARVEL PHOTO).

The 1890 Victorian manse in the 1930s photograph at right sat on West Main Street in Conway Village for seven decades. It testified to the commercial success of Alpheus Crosby Kennett, who seems to have come by his ambition and business acuity honestly. His father, William Kennett, owned a prosperous farm near Madison Corner, but was extensively engaged in lumber operations and dabbled in construction as well. When Henry Metcalf came to Conway from Tamworth to start a spool factory, it was William Kennett who built it for him.

Crosby Kennett, as he called himself in his younger days, was born in Madison in 1859, and graduated from the boarding school then known as the New Hampton Literary Institution. Like Andrew Carnegie and several others who prospered fabulously in business during the second half of the 19th century, he started work at the age of 17 as a railroad telegrapher. The Portsmouth, Great Falls & Conway Railroad assigned him to the Salmon Falls depot, transferring him after a year to South Berwick as the depot master. There, in April of 1882, he married Carrie Gerrish, the daughter of a Berwick doctor, but she died before the year was out.

In 1883 he moved to the West Ossipee station of the PGF&C, and in 1887 he bought a village house and a nearby farm there, but the next year he left Ossipee altogether. Henry Metcalf had died, and on June 11, 1888, Kennett paid his widow $8,000 for the spool mill. He moved to Conway to superintend the mill, adopting the more businesslike name of A.C. Kennett. On Halloween of 1888 he married Lora Ferren, a Madison girl who had just turned 18. The next summer, a week after the death of his firstborn son and namesake, he bought the old Zara Cutler homestead beside the Conway railroad station, moved Cutler’s house across the street, and on the empty lot began building the big Victorian that signaled his commercial success.

A psychologist might speculate that A. C. Kennett threw himself into work in response to personal grief. A 1908 sketch reported that he never missed a day of work in 10 years with the railroad, or took a three-day vacation from his private business. He steadily expanded his manufacturing interests and his father’s lumber investments. At the beginning of the 20th century he owned 70,000 acres of timberland, and it was reputedly possible to walk from the southern tip of Carroll County to the northern extremity without stepping off his property.

He died at 58, in 1917. His older son, Frank, was only 21 when he had to take over his father’s entire business empire. Frank later built a brick Tudor home across the street from the Victorian; judging from a penny I found inserted under the hardwood floor while his grandson and I were renovating the old butler’s pantry, the Tudor was built in 1929. Lora died in 1950, and a decade later A. C. Kennett’s old manse was consigned to the wrecking ball.