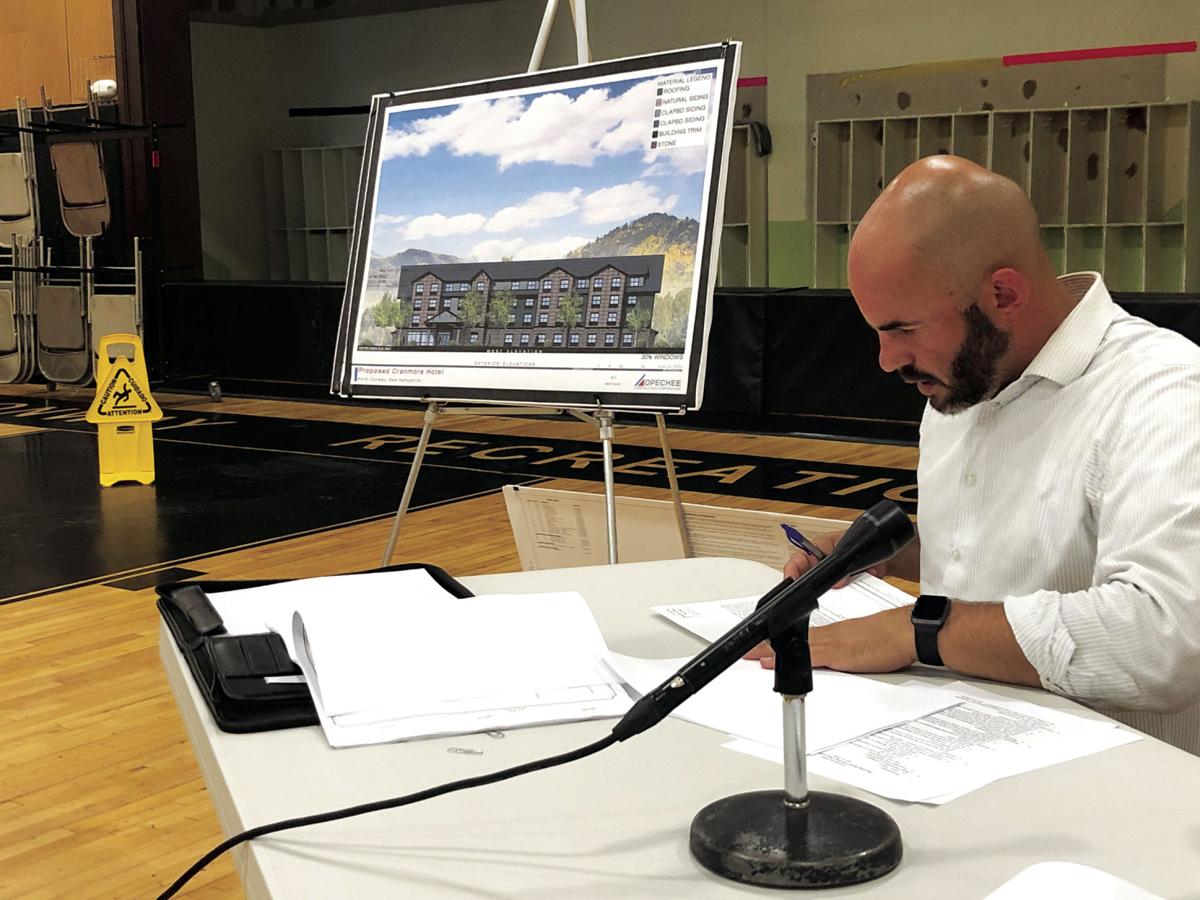 Josh McAllister of HEB Engineers presents plans for a four-story, 90-room hotel to be built where the Cranmore Fitness Center stands. The Conway Planning Board gave conditional approval for the project July 9. (TOM EASTMAN PHOTO) 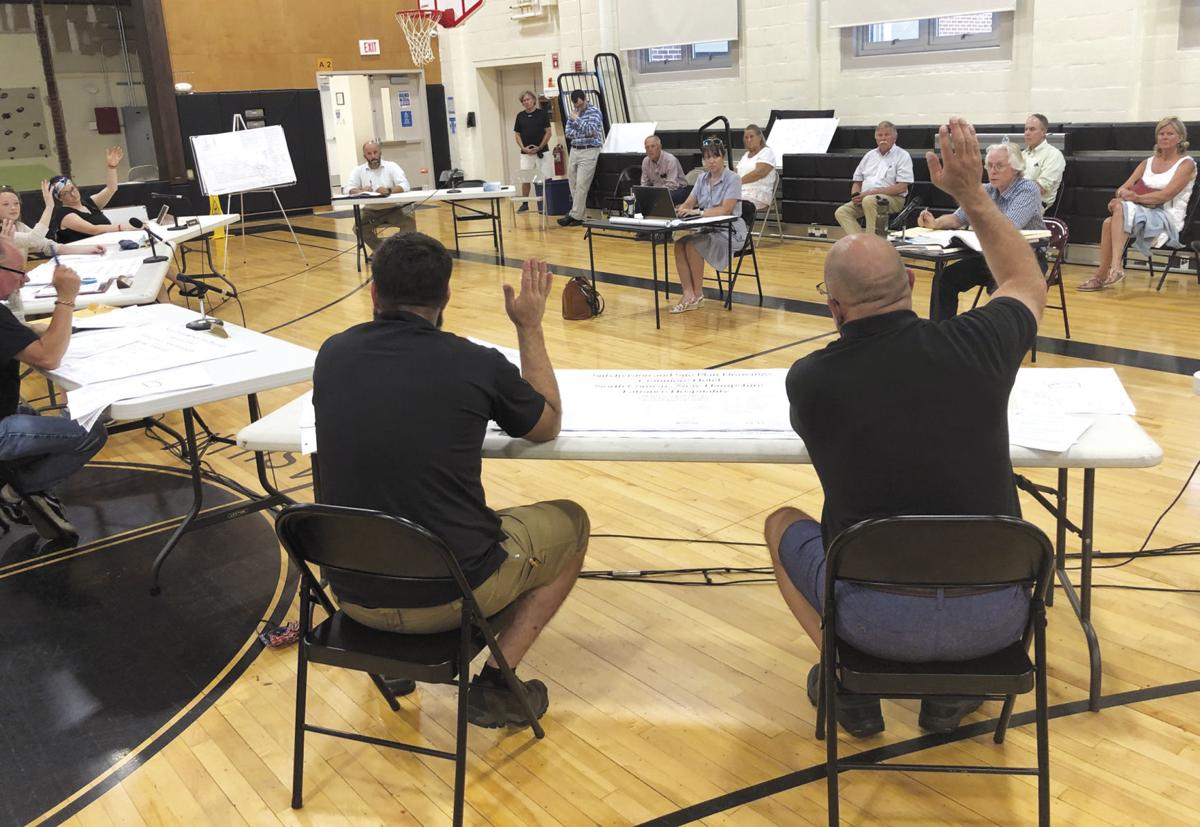 The Conway Planning Board unanimously votes to give conditional approved a 90-room hotel for Cranmore Mountain Resort on July 9. (TOM EASTMAN PHOTO)

Josh McAllister of HEB Engineers presents plans for a four-story, 90-room hotel to be built where the Cranmore Fitness Center stands. The Conway Planning Board gave conditional approval for the project July 9. (TOM EASTMAN PHOTO)

The Conway Planning Board unanimously votes to give conditional approved a 90-room hotel for Cranmore Mountain Resort on July 9. (TOM EASTMAN PHOTO)

CONWAY — “Congratulations, you have your conditional approval,” Conway Planning Director Tom Irving told Cranmore hotel project engineer Josh McAllister of HEB Engineers at the conclusion of a 40-minute site-plan review July 9 before the Conway Planning Board.

During his presentation, McAllister said the project calls for a four-story, 90-room hotel to be built within the footprint of the Cranmore Fitness Club, which will be demolished.

Cranmore General Manager and President Ben Wilcox was on hand for the presentation at the Marshall Gym at the Conway Recreation Department inside Kennett Middle School, accompanied by Cranmore owner Brian Fairbank of the Farbank Group and Rich Lafrance of Lafrance Hospitality Associates.

Afterwards, Wilcox said, “We were thrilled to get the approval and with the fine job Josh did in presenting the project.”

Wilcox said that the new hotel will be a Fairfield Inn and Suites Hotel, a brand owned by Marriott. It will be operated by Lafrance Hospitality Associates, which operates the Residence Inn by Marriott in North Conway.

According to Wilcox, Lafrance will use Opechee Construction Corp. of Belmont as the general contractor, using local subcontractors. He said Lafrance has used Opechee for several of his hotel projects.

“It’s pretty much a formula for any successful ski resort to have a hotel,” said Wilcox. “This will give us that advantage when people look at North Conway as a place to stay. It provides another lodging option.”

He said LaFrance on board "will bring people to the valley who are in their lodging partner system, and they will visit local restaurants and attractions."

“Cranmore draws a big enough skier base, and not all will stay at this hotel so we will continue to work with our great hotel properties in the valley,” said Wilcox.

He added: “We do not have an exact date yet for the project, but the earliest for the demolition would be spring 2021 because we will be using the Artists Falls Lodge (former Fitness Center) for our tubing park (food and ticket) sales this winter.

He said the hotel is slated to open in spring or summer 2022.

During his presentation, McAllister said the hotel would be considered a supporting use to the Cranmore ski resort. Such a use requires a special exception under the town’s zoning ordinance.

The ZBA granted conditional approval in November, pending completion and acceptance of a traffic study. Consultants for Cranmore studied the intersections where Pine Street and Kearsarge Road intersect with White Mountain Highway and concluded that the development would not adversely affect service at those intersections.

That approval cleared the way for Cranmore to seek site-plan review.

During the review, Grove Street resident Cheryl Wheeler asked whether the board ought to consider adding a signalized light at the Grove Street/North-South Road intersection.

In response, McAllister referred to the traffic study.

McAllister also said parking at Cranmore will be increased from 1,470 spaces to 1,590 spaces, exceeding the town’s required 1,519 spaces by 71.

“The town does not have a standard for ski area parking, but it does have an allowance to use the industry standard set by the Association of Transportation Engineers,” McAllister told the Sun after the meeting.

He said 40 spaces will be in front of the hotel and another 99 located out back on the southern end. Another 35 spaces will be created for employee parking on the west side, in an area formerly used by the Ghoullog fall attraction

Alternate board member Steve Steiner asked whether the project would include a restaurant, but McAllister reiterated what he had stated at the ZBA meeting in November — that it would have a breakfast counter but not a restaurant.

In a follow-up interview, Wilcox said Zip’s Pub and Grill will remain in operation in its current building at the base of the mountain for at least “four or five years,” after which plans call for a new building on the site that will house a restaurant.

Plans also call for a cafeteria to be built in Building 3. Building 2 is currently being built adjacent to the completed Building 1 of the Kearsarge Brook Condominiums at Cranmore as part of Cranmore’s redevelopment by the Fairbank Group.

Wilcox said the second phase of the Kearsarge Brook's amenities building next to the tubing park has received approval from the town.

“That building will include a basic snack bar, providing an indoor space for hot chocolate and for people to warm up when they’re using the tubing park,” said Wilcox.

“It will be a two-story building connected to the heated outdoor pool that is already built, with a downstairs area for ticket sales and a bathroom."