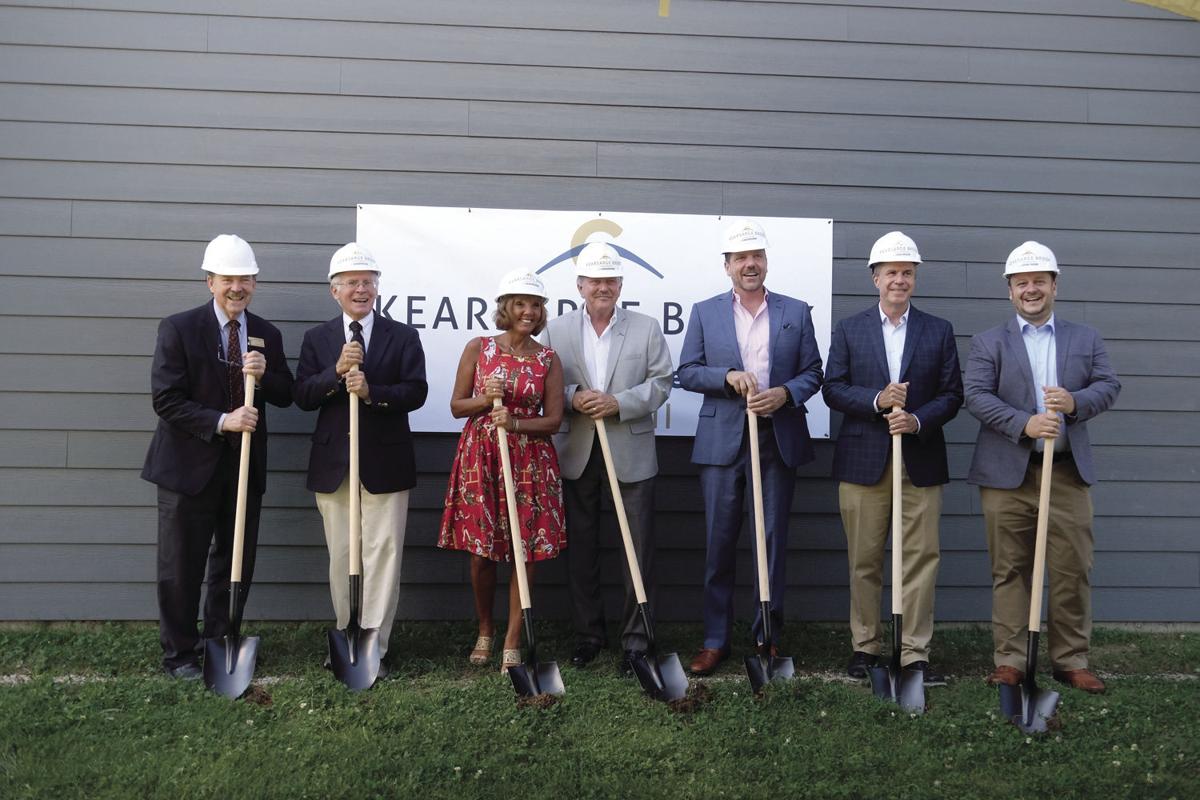 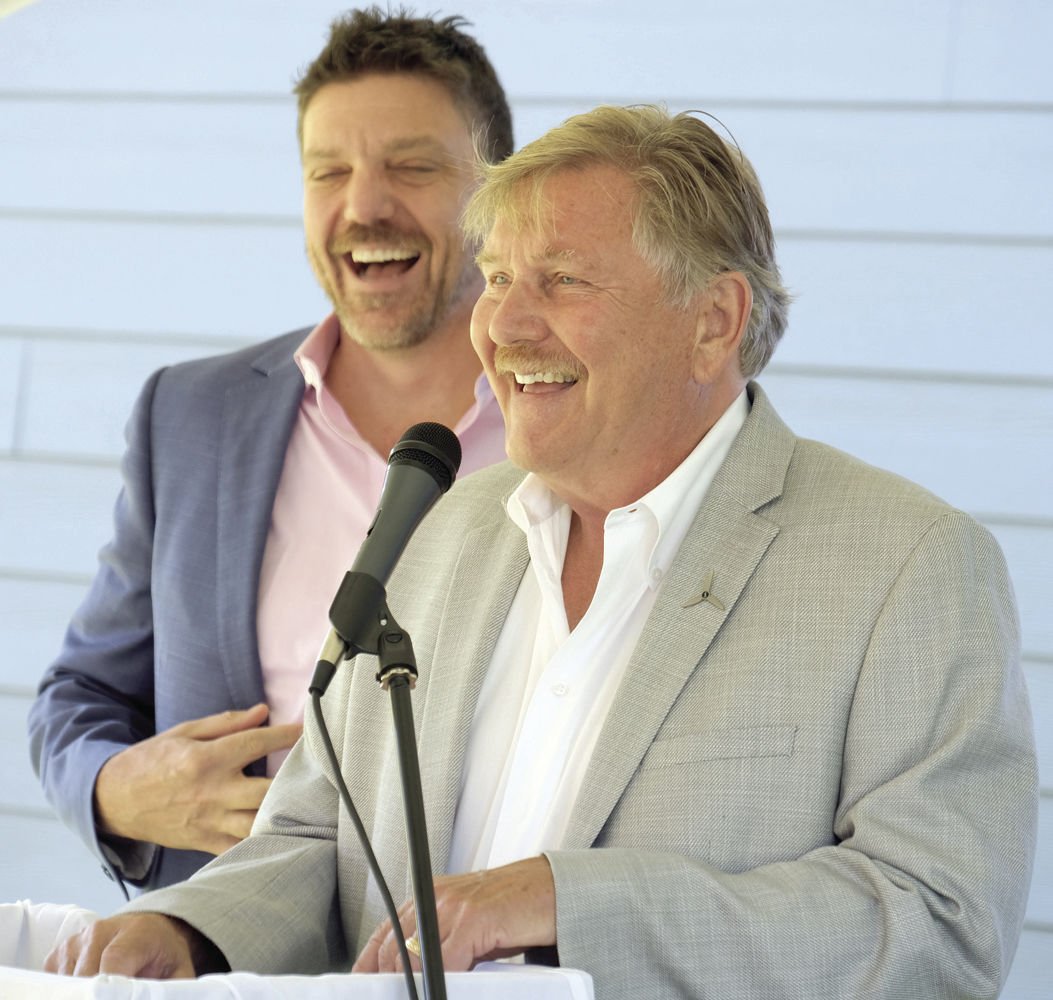 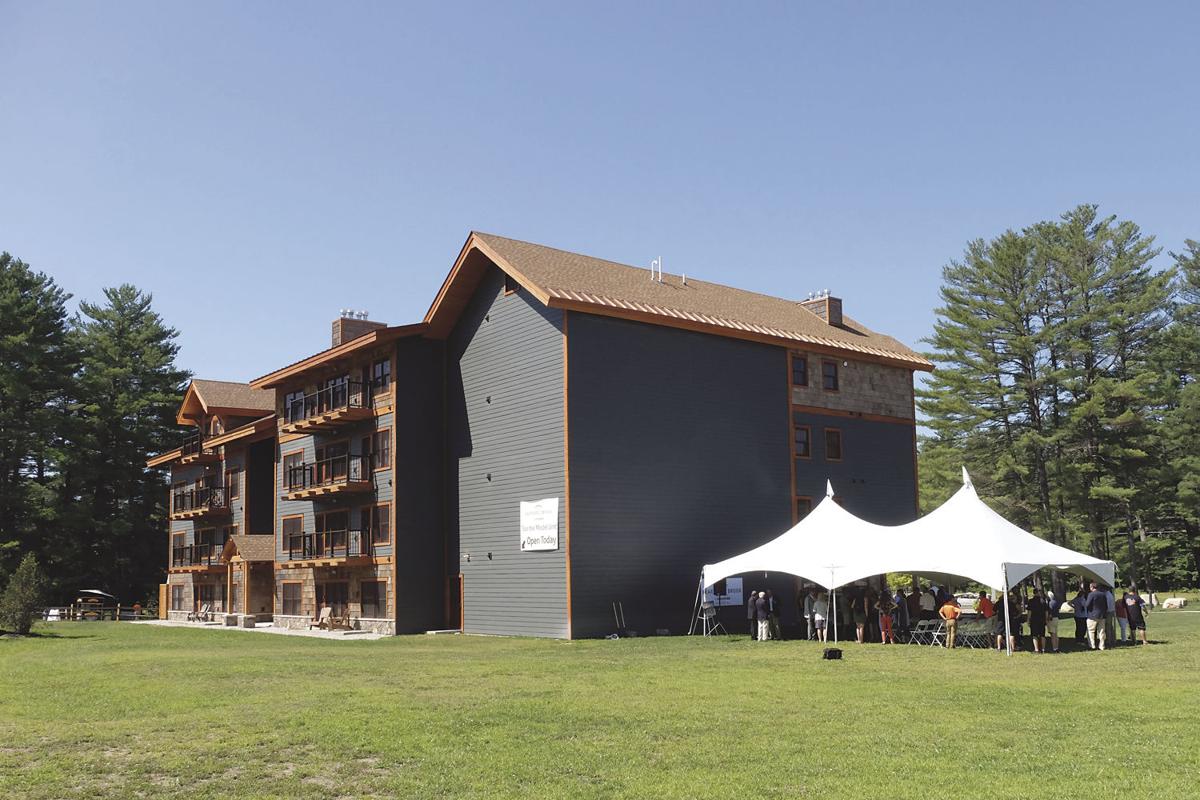 Phase II of the Kearsarge Brook Condominium project will be constructed connected to Phase I at about where the tent stands seen during the groundbreaking celebration Tuesday morning. (JAMIE GEMMITI PHOTO)

Phase II of the Kearsarge Brook Condominium project will be constructed connected to Phase I at about where the tent stands seen during the groundbreaking celebration Tuesday morning. (JAMIE GEMMITI PHOTO)

CONWAY — Phase One down; Phase Two, set to roll.

With all 18 units of Phase One of the Kearsarge Brook Condominiums at Cranmore sold, and with seven contracts signed for the 19 units planned for Phase Two, Cranmore Mountain Resort owners Brian and Tyler Fairbank of the Fairbank Group, Cranmore officials, Badger Realty agents, state representatives, local banking officials and contractors gathered at the base of the South Slope Tuesday morning for a groundbreaking ceremony.

Cranmore General Manager and President Ben Wilcox welcomed all to the gathering, including Chuck Henderson, representing Sen. Jeanne Shaheen (D-N.H.); Democratic Executive District 1 Councilor Michael Cryans of Hanover; North Conway Fire Department Chief Pat Preece; and Cranmore owners Brian and son Tyler Fairbank of the Fairbank Group, which purchased Cranmore in 2010 and has invested heavily in capital improvements in the years since to transform the ski area into a year-round business.

Putting the Kearsarge Brook project in poignant perspective was Henderson, who noted, “I can feel Dick Badger is here in spirit.”

Henderson's reference was to the founder of Badger Realty of North Conway, who died recently at the age of 90. Badger had championed the project and lived to see sales for Phase One completed. Henderson said the late Jackson resident would have been thrilled to see the launching of Phase Two.

Badger Realty is the listing agent for the project. General Manager Brenda Leavitt was among those on hand for Tuesday’s ceremonies from Badger's office, along with project sales representatives Michele Jordan and Eileen Defeo.

Leavitt said a few owners from Phase One also have bought units for Phase Two.

The project is expected to be completed by December 2020, according to general contractor Todd Niemaszyk of Atlantic Construction Group of West Groton, Mass.

Niemaszyk — owner of a unit in Phase One, who is also buying a unit in Phase Two — said like many owners, he uses his unit as an investment, renting it out when not using it with his family for ski and vacation visits.

“We’re very happy with our unit and our investment, and we’re excited to be part of this project now as contractors,” said Niemaszyk after the ceremony, flanked by his two children and wife, Kelly.

General contractor for Phase One was Glen Builders Inc. of Bartlett, a company that ceased operations after that phase's work was completed.

In his remarks, Wilcox said Glen Builders used as many local subcontractors as possible and he said that Atlantic also is committed to using local companies as much as possible, a commitment Niemaszyk later confirmed to the Sun.

Wilcox and the Fairbanks said Kearsarge Brook is part of a long-range plan that the Fairbank Group launched when they purchased Cranmore.

Lift and snowmaking improvements have been made to the mountain’s infrastructure under their ownership.

“Not too long ago, we were standing here at this same spot, under a tent announcing plans for Phase One," Wilcox reminded the crowd of about 50 people.

"At that time, all we had were pictures of what it would look like. And now, we have the building, and it is very exciting to be here today to hold the groundbreaking for Phase Two," said Wilcox, noting that the $8.5 million Phase One was completed in November 2017.

Wilcox said both phases are part of a $50 million base area redevelopment plan that eventually will include a new 45,000-square-foot base lodge to replace the existing 25,000-square-foot facility, as part of Phase Three and Four.

Condominium sales will be used to finance the commercial infrastructure and base lodge improvements.

“It’s a much bigger picture, as many of you are aware, than just building condominiums,” said Wilcox.

“We’re building a residential community for people who really want to come to Cranmore, which is really exciting, and we’ve received a big thumbs up from the owners in Phase One.

"But the bigger picture is adding to our base lodge facilities, which will be exciting not only for the winter but for the summer as we will be able to do more weddings. All of our facilities will be air-conditioned and feature very efficient heating, as well,” said Wilcox.

The Phase Two building will be attached to Phase One’s building. Wilcox said they will share an entryway and the units will be serviced by the same elevator currently in use for Phase One.

Phase Two will include 19 two- and three-bedroom units ranging from approximately 1,249 to 2,082 square feet. All Phase Two units will include an en suite master bedroom, stone-faced propane fireplace in the main living area, a patio (first-floor units) or balcony, and luxury vinyl plank flooring throughout the homes.

Phase One contained 18 two- and three-bedroom residences at the base of the South Slope.

Phase Two is part of a six-phase plan that will eventually be six new base area buildings at the base of Cranmore Mountain. Phases 3-6 will consist of both residential and day-ski facilities.

New buildings will eventually replace all of Cranmore’s existing facilities, except for the Cranmore Ticket Office building and historic summit Meister Hut.

Two-, three- and four-bedroom condominium units will be built on the second and third floors of the final four phases.

Also on hand Tuesday were representatives of Northway Bank and Bank of New Hampshire.

Detailed plans are available in the model unit at Kearsarge Brook for individuals interested in available units. The model is open Friday- Monday from 11 a.m.-4 p.m., or by appointment Tuesday-Thursday.

For more information about Kearsarge Brook at Cranmore, go to kearsargebrooknh.com.