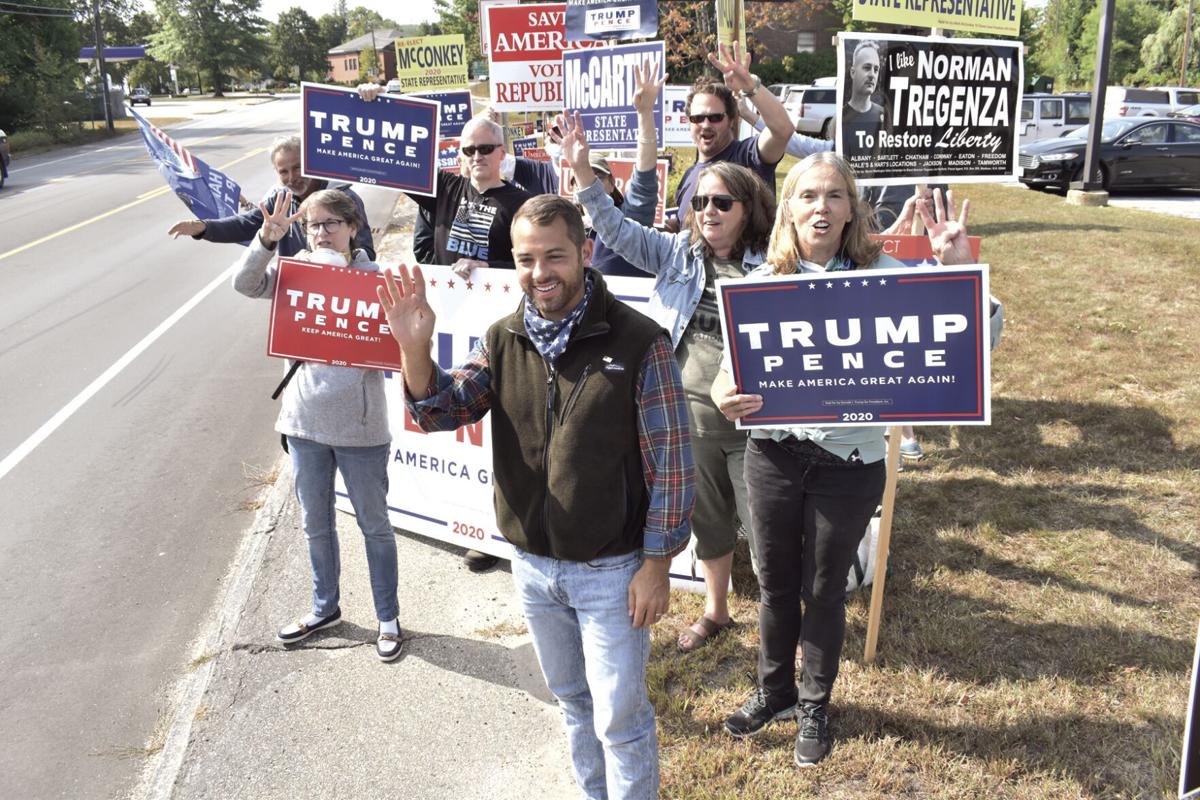 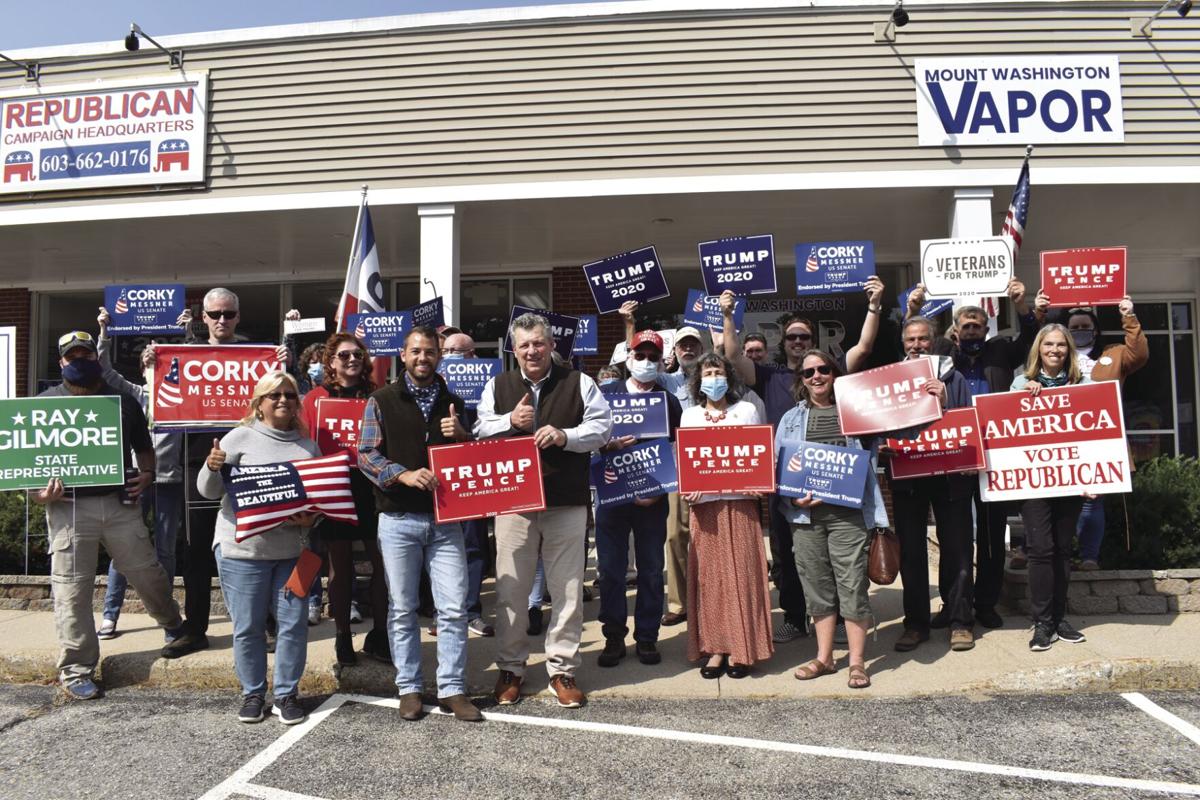 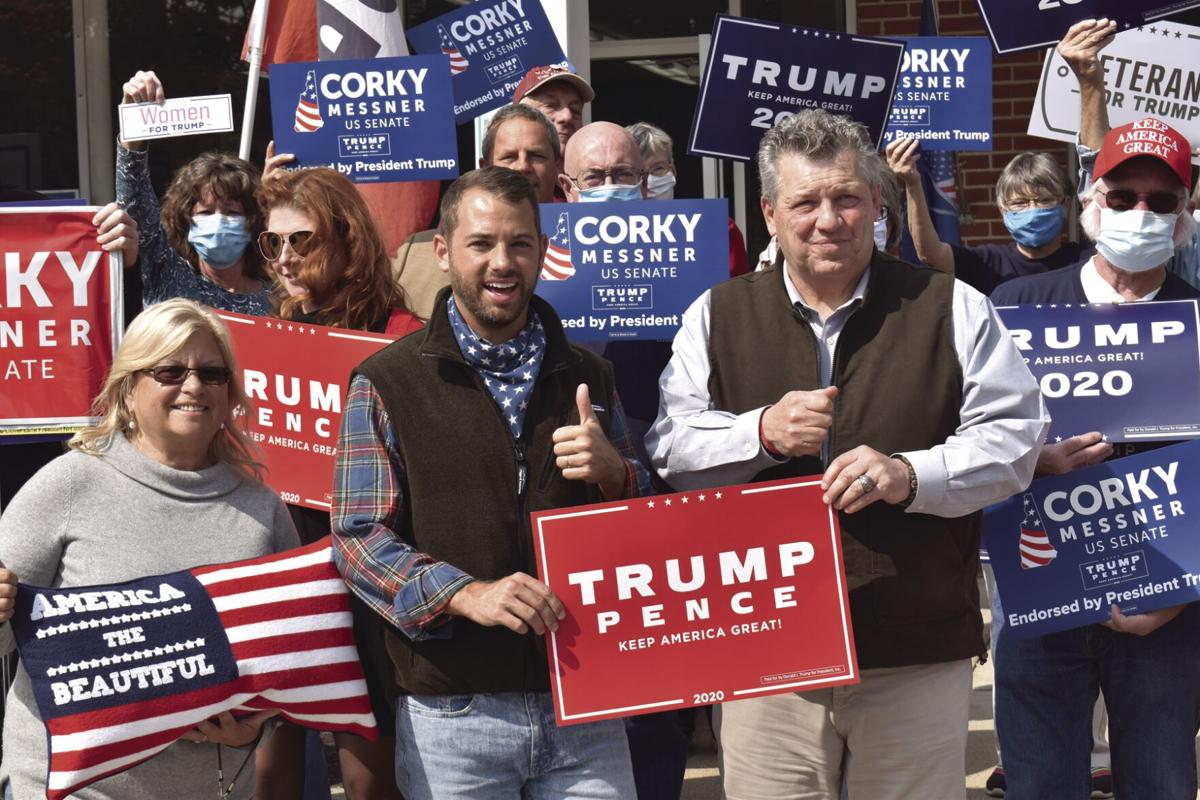 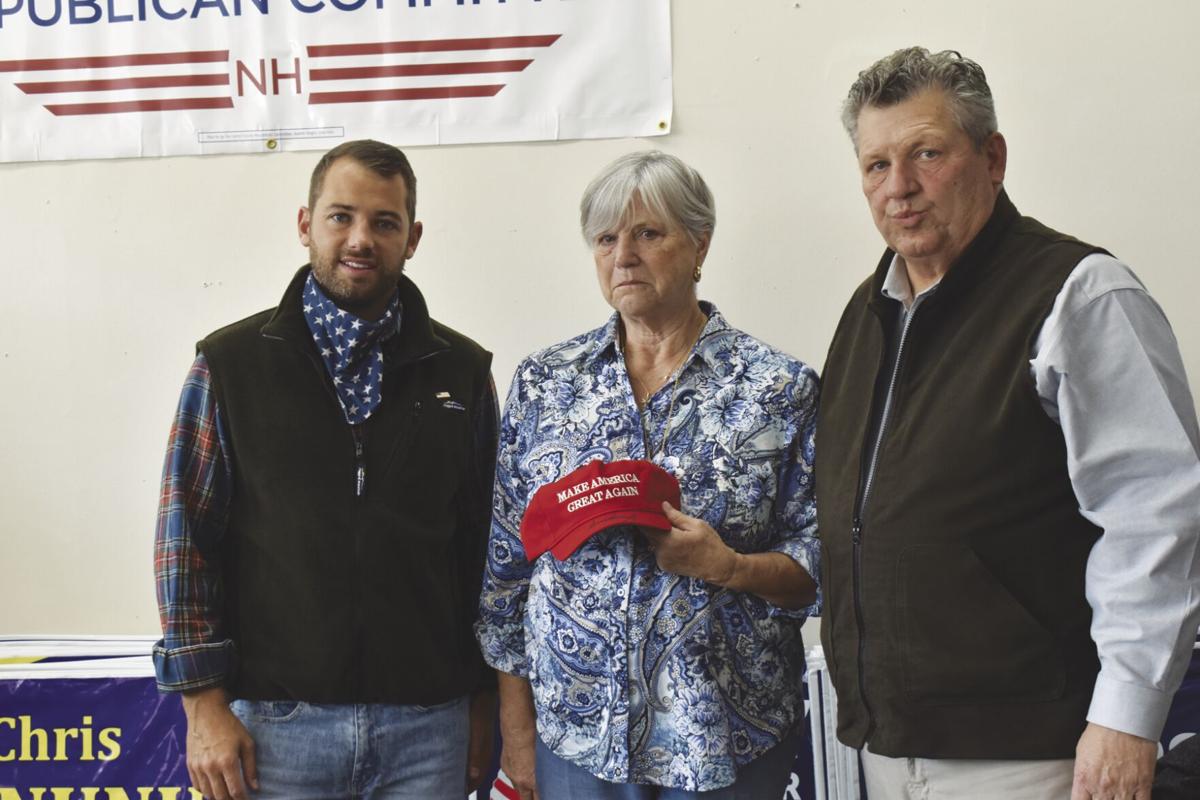 Joining him on the visit was Corky Messner of Wolfeboro, Republican candidate for U.S. Senate.

Pence, 31, of Arlington, Va., is a senior adviser with the Trump campaign. Before he arrived, about 20 Trump supporters gathered in front of the office at 50 White Mountain Highway and held signs. They received friendly honks especially from big trucks that rumbled up and down Route 16, as well as a few middle fingers from passing drivers.

Terry McCarthy, who is a county commissioner, accepted it because her husband was unable to attend.

Carroll County Republicans' Vice Chair Joe Kenney said he was standing in for Frank McCarthy because he said Frank had "health issues."

"Frank has been the driving force behind this Republican Committee for the last several years, and it's with his effort, his wife, Terry, that we've been able to fundraise, organize and really stimulate the valley," said Kenney, who is running to retake the Executive Council District 1 seat from Democrat Mike Cryans.

In brief remarks to the crowd, Pence said: "Freedom is up for a vote in 48 days.

"We are so happy that John was able to come by today," said Umberger. "I think that it helped us all to get more in the spirit knowing the federal campaign, the Trump campaign, is willing to come to a town of 10,000 people and celebrate what President Trump is doing."

"In 25 years there has not been a peace agreement in the Middle East," said Messner to applause. "President Trump and Vice President Pence have pulled off two!"

After the speeches, The Sun spoke with Pence, Messner and Carl Thibodeau who owns the plaza and also serves as a Conway selectman.

Pence said that the Trump administration is committed to promoting American made products.

"Last night when we were up in Colebrook, I was talking to some of the loggers up there," said Pence. "They were very clear, and they said in no uncertain terms that that the Chinese Communist Party and unfair trade practices is exactly what has damaged the industry in the North Country in New Hampshire."

Thibodeau agreed and said that for him the benefits of Trump's policies aren't just theoretical. He said in 2008, he had 44 people working at his Tee Enterprises on Hobbs Street. Within 60 days of Barack Obama's election, he had to reduce his staff to 21.

"We suffered dramatically, right up until they (voters) elected Trump," said Thibodeau. "Then the reverse happened. Trump was elected. And in 90 days, we were hiring. We had the best year last year that we have had in the last nine years, all because of Trump's policies."

Pence said that New Hampshire needs Messner in office because he will "fight shoulder to shoulder" with Trump on issues like judges, jobs and putting New Hampshirites first.

The New Hampshire Democrats sent the Sun a statement in reaction to Pence's scheduled appearance.

“John Pence’s visit to the Granite State won’t distract voters from the failed record of his uncle Mike and their boss, President Donald Trump," said Will Rasky, the Democrats' Rapid Response Director.

"John won’t be able to explain to voters how Trump knowingly led us into a catastrophic pandemic response, resulting in a recession that cost thousands of New Hampshire residents their jobs, and he can’t justify why Trump thinks Granite State service members are ‘losers’ and ‘suckers,’ so why should New Hampshire voters care at all?”