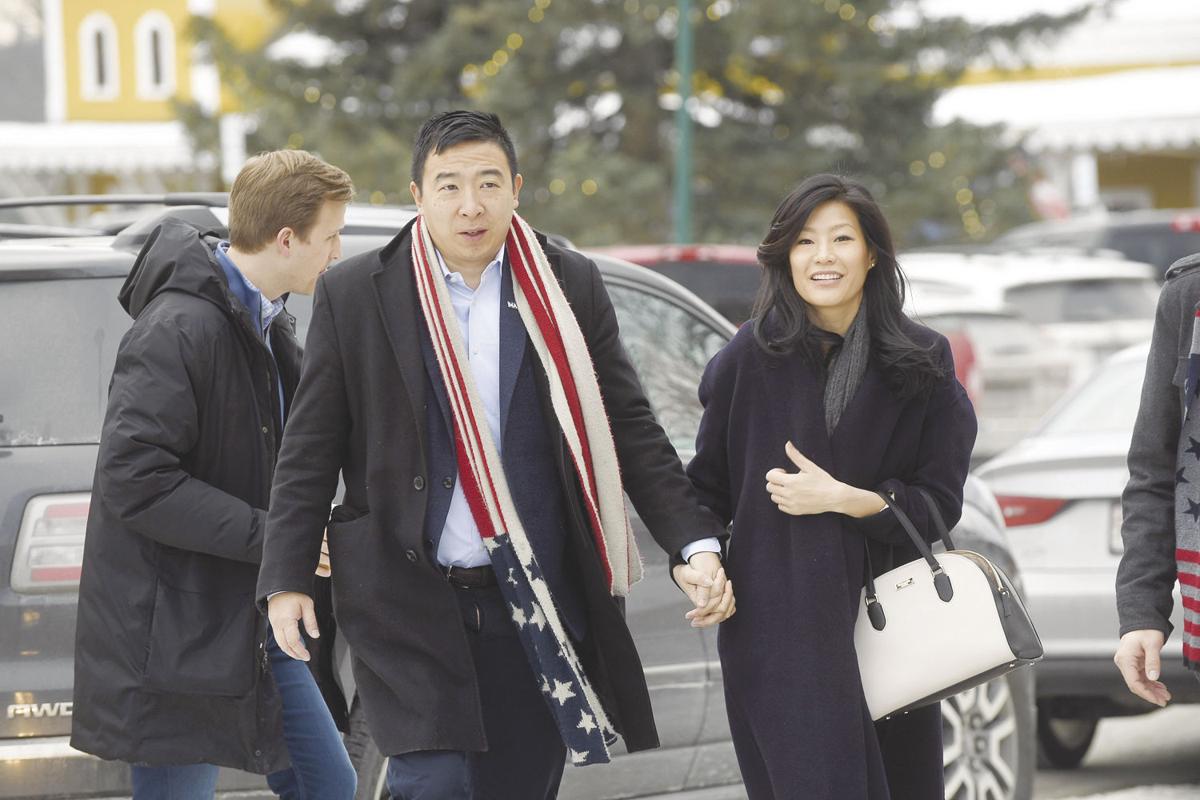 Democratic presidential hopeful Andrew Yang arrives in North Conway with his wife Evelyn Yang on their way to a campaign stop at the Met Coffee House and then on to an editorial board interview at the Conway Daily Sun office on Jan. 10. (JAMIE GEMMITI PHOTO) 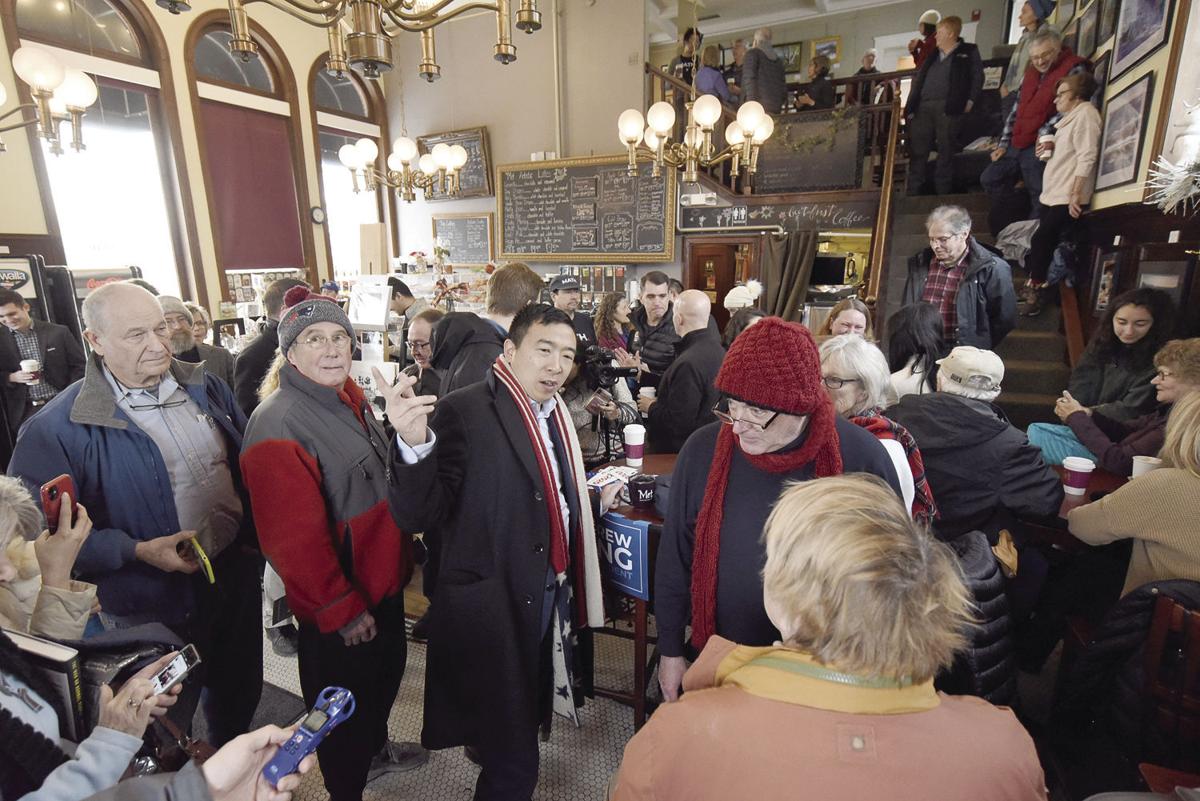 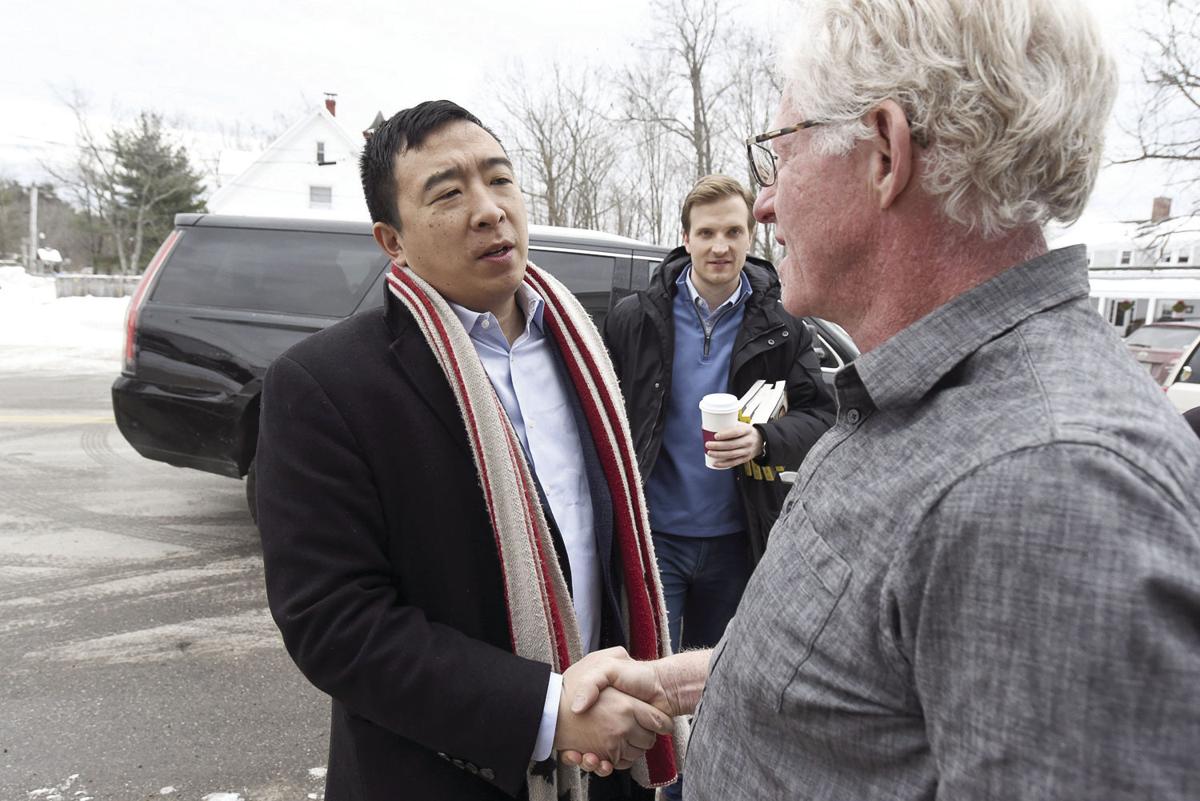 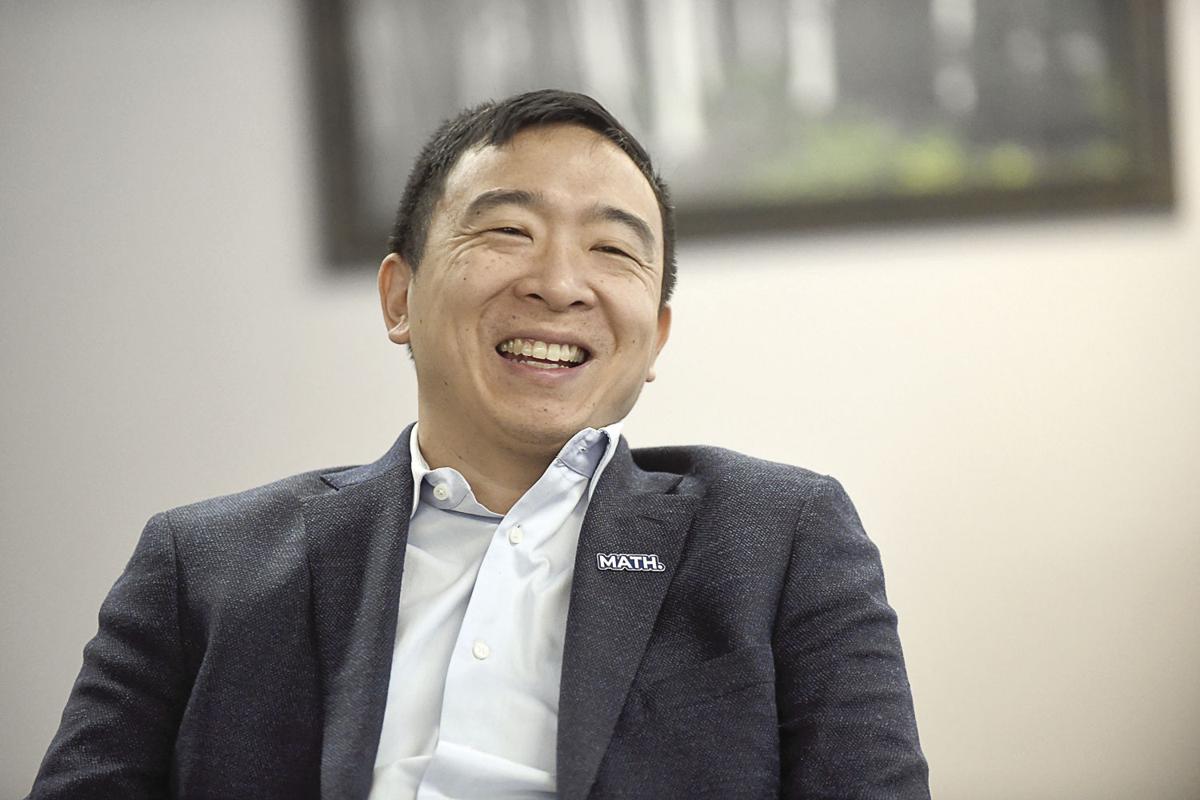 Democratic presidential hopeful Andrew Yang laughs during an interview with the Conway Sun editorial board at the office in North Conway last Friday. (JAMIE GEMMITI PHOTO)

Democratic presidential hopeful Andrew Yang arrives in North Conway with his wife Evelyn Yang on their way to a campaign stop at the Met Coffee House and then on to an editorial board interview at the Conway Daily Sun office on Jan. 10. (JAMIE GEMMITI PHOTO)

Democratic presidential hopeful Andrew Yang laughs during an interview with the Conway Sun editorial board at the office in North Conway last Friday. (JAMIE GEMMITI PHOTO)

Yang, 45, is one among several candidates who hope to be the party’s nominee who goes on to the general election in November versus Donald Trump. Others include Joe Biden, Pete Buttigieg, Amy Klobuchar, Bernie Sanders, Elizabeth Warren and Tom Steyer, all of whom will be in tonight’s televised debate at Drake University in Des Moines, Iowa, at 9 p.m., hosted by CNN and the Des Moines Register newspaper.

Yang had hoped to be on the stage with them. He and fellow Democrat Sen. Cory Booker of New Jersey had amassed enough donors to qualify but fell short on the polling front.

Booker announced Monday he was suspending his campaign.

Yang was the first candidate of the political cycle to take part in an editorial board with the Sun, back in March. Last Friday, he returned for a second sit-down at the Sun. But first he and his wife, Evelyn, appeared briefly at the Met Coffee House in North Conway, where he said he had an “Evita moment” addressing a crowd of about 65 people from the Met’s upper level.

Yang is perhaps best-known for his “Freedom Dividend” proposal, guaranteeing $1,000 a month to every American adult over 18.

During the nearly hourlong editorial board, Yang took aim at Washington, D.C., which he said is the richest place in the nation and has been totally overrun by corporate interests.

He sees the Freedom Dividend as a means to improve the lives of ordinary Americans.

“The thing that infuriates me the most if you’re living your life here in New Hampshire and Conway, you know, you’re responsible, you pay your bills, you do your thing, like, you know, if something goes wrong in your family, then you think ‘Well, OK, like, I have to bear the consequences of that,’” said Yang, who cited the opioid crisis as an example of the deck being stacked against ordinary Americans.

“But in D.C. 10 years ago, they had a choice between bailing out the banks for $4 trillion or keeping Americans in their homes, and they chose the banks. So there’s no accountability there, no leadership, no real responsibility. That’s D.C.

“Now, I think the most productive thing I can do is get up there, rewrite the rules in the 21st century economy to work for you and the people in your community,” he said.

As president, Yang said he would never track how Americans were spending their Freedom Dividend, which he likened to corporate stock. It would be funded in part by taxes on big internet based companies like Google and Amazon.

The amount of the dividend is too little to make an industrious person become lazy or so lavish that people can live on it comfortably.

“Is our data not being sold and resold for billions of dollars a year right now, and we don’t get a dime?” Yang asked rhetorically. “We’re just getting sucked dry and depleted. Is Amazon not closing 30 percent of our local stores and malls, wiping out the most common job in our community and paying zero taxes? All of these things are true.”

One of the things the Freedom Dividend is meant to do is give parents more time with their children. Right now, in most cases, two parents have to work to support their families.

“If you had two adults in that household, it’s $24,000, and then one of you staying home becomes actually much more realistic (with the dividend),” said Yang, who himself has two young sons.

Yang said he’s far from a one-issue candidate, In fact, he has about 150 policy proposals on his website.

Among the other things Yang would like to do is keep America competitive when it comes to medical research. He would also support local journalism, which he says is vital for having an informed electorate.

“Studies have clearly shown that democracy does not function as well if you don’t have local news,” said Yang.

The biggest things that surprised Yang over the course of his campaign was corporate media, which misidentified him as “John Yang” and even ran the photo of another man in a line up of 2020 candidate mugshots.

Yang has also been given less debate time than other major candidates. But he was proud to say he’s outlasted many candidates, including established politicians.

“So, at what point would a media company not screw up my photo? I don’t know. Like maybe after I’m president,” said Yang adding he was “bemused” by the latest mistake.

“After Joe Rogan, we saw massive surges in interest and donations,” said Yang, who added his interview with Rogan has been seen on YouTube nearly 5 million times. “I think we raised over a million dollars in the days after my conversation with Joe. And so then you knew that you had a very powerful and important message.”

Yang seemed more subdued Friday than he was in March and sounded like he was catching a cold. At the outset of the interview, He went on to cancel a scheduled stop in Newport over the weekend due to illness.

But Yang said this is the best January he could have hoped for and said he had braced himself for the possibility that he’d fare less well.

“I was willing to ‘Don Quixote’ it up,” said Yang referencing the noble but ineffectual Cervantes hero who tilts at windmills. “But now I’ve got hundreds of thousands of donors. I’m on The Colbert Show next week, like, you know, I can actually make the changes. It’s awesome. It’s invigorating.”

“Someone has to fight for you all, honestly. What’s happened in this country, it’s tragic. Our kids deserve better, you deserve better. Your town deserves better.”