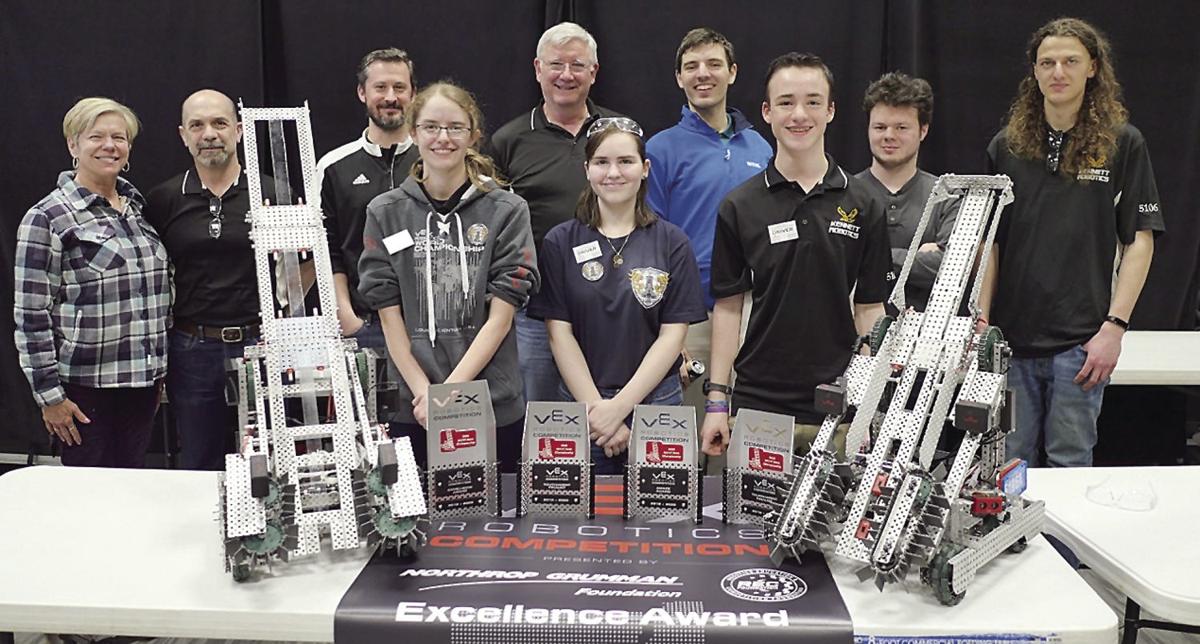 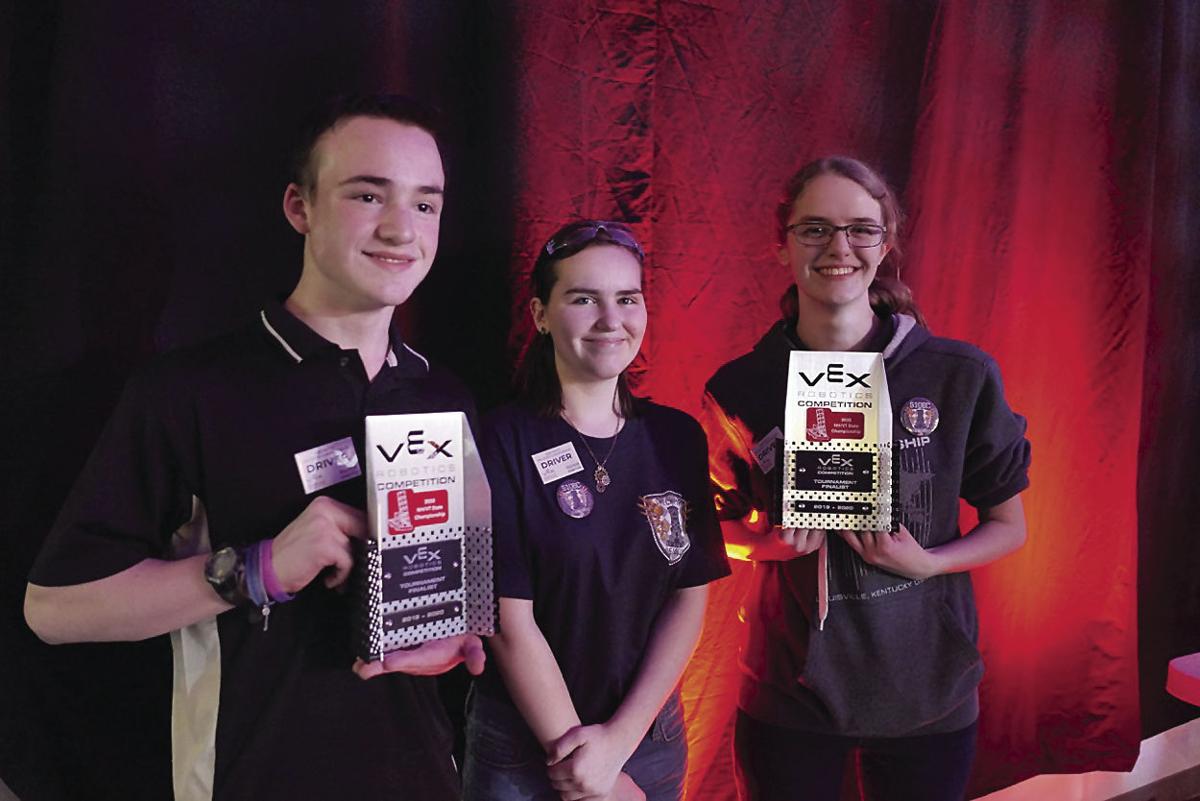 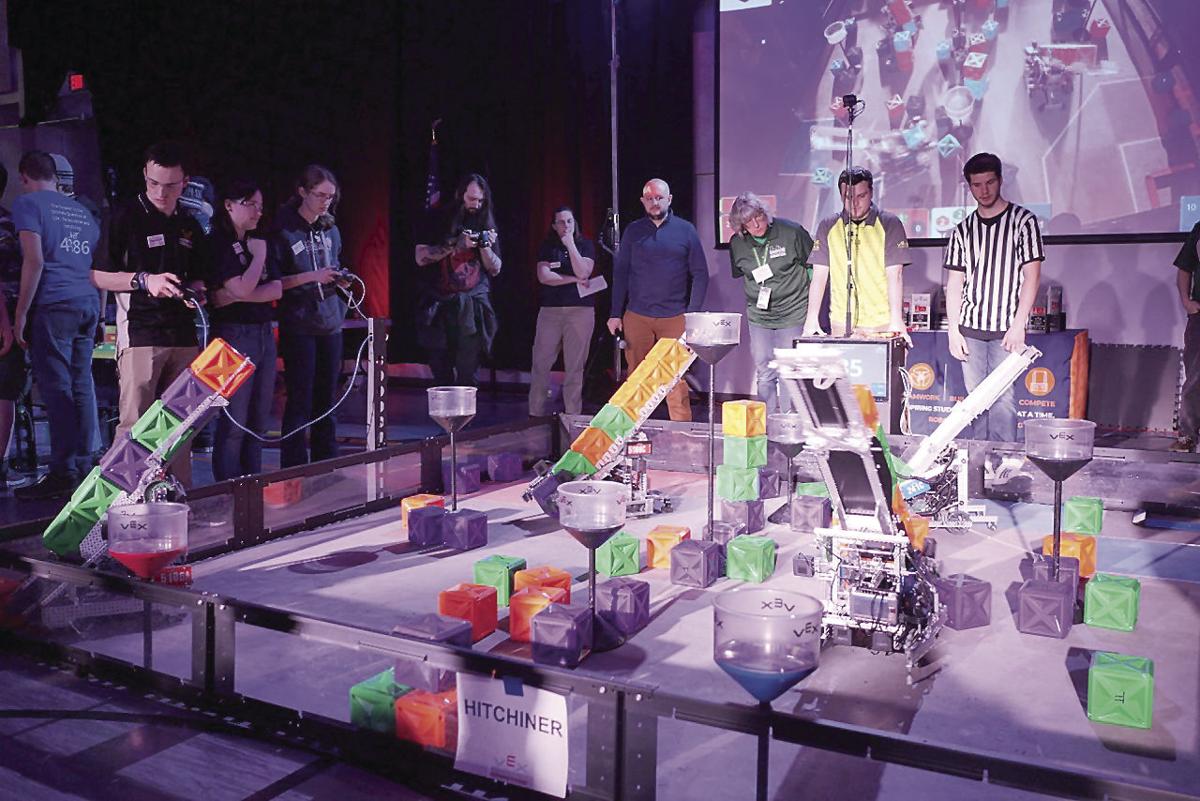 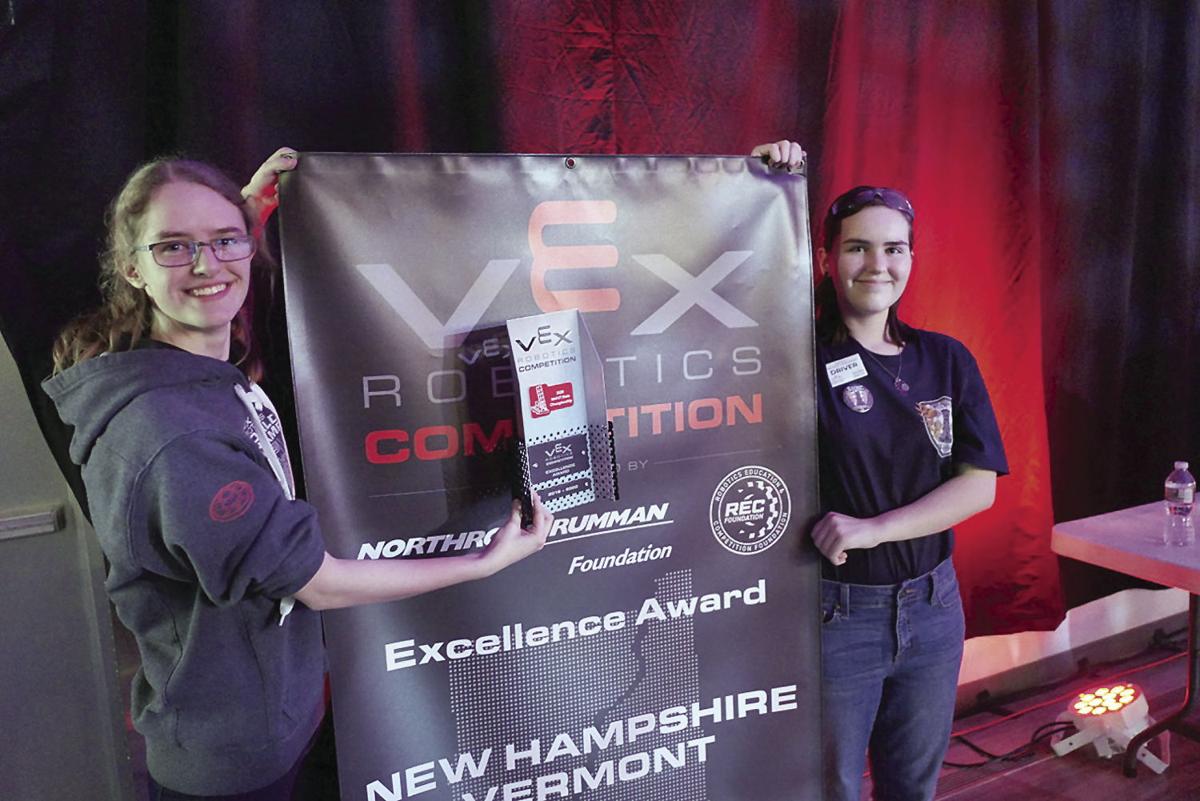 Kennett High seniors Chani Mores (left) and Kate Keefe have qualified for the Vex World Championships in Kentucky in April for the third year in a row. On Saturday, the dynamic duo won the Excellence Award at the New Hampshie-Vermont State Championships in Manchester. (COURTESY PHOTO) 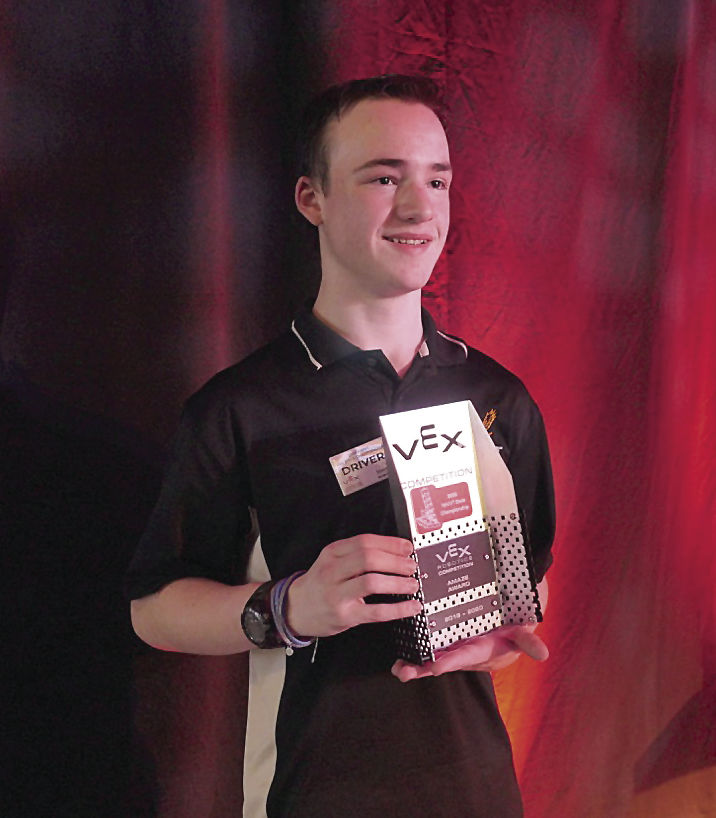 Kennett High freshman Adam Schmidt won the Amaze Award, earned by a robot that amazes the judges by “being high-scoring, competitive, reliable/robust, with great consistent autonomous code and use of sensors in both autonomous and driver-control periods,” at New Hampshire/Vermont State Championships on Saturday. He has qualified to go to World Championships in Kentucky in April. (COURTESY PHOTO)

Kennett High seniors Chani Mores (left) and Kate Keefe have qualified for the Vex World Championships in Kentucky in April for the third year in a row. On Saturday, the dynamic duo won the Excellence Award at the New Hampshie-Vermont State Championships in Manchester. (COURTESY PHOTO)

Kennett High freshman Adam Schmidt won the Amaze Award, earned by a robot that amazes the judges by “being high-scoring, competitive, reliable/robust, with great consistent autonomous code and use of sensors in both autonomous and driver-control periods,” at New Hampshire/Vermont State Championships on Saturday. He has qualified to go to World Championships in Kentucky in April. (COURTESY PHOTO)

CONWAY — For the seventh time in the past eight years, the Kennett High Coders robotics team has qualified for the 2020 Vex Robotics World Championships.

In April, KHS will send two teams to Louisville, Ky., to compete against students from across the globe.

Seniors Chani Mores and Katie Keefe (known as team 5106C) punched their tickets to the World Championships for the third year in a row after turning in stellar performances at the Vex New Hampshire/Vermont State Championships at Manchester Community College in Manchester last Saturday. The dynamic duo with their beloved robot, Checkmate, brought home the Excellence Award, the highest award given at the state championships.

Teammate Adam Schmidt (team 5106A), a freshman, also qualified for Worlds after winning the Amaze Award on Saturday, earned by a robot that amazes the judges by “being high-scoring, competitive, reliable/robust, with great consistent autonomous code and use of sensors in both autonomous and driver-control periods.”

Schmidt and his robot Alpha later teamed with Keefe and Mores to finish second in the state for Robot Programming Skills.

The Vex Robotic World Championships brings together in Louisville the best 500 teams from 45 countries representing more than 11,000 teams competing in 900 tournaments.

This year marked a first for the Coders, which are in their ninth year of existence, as all four Kennett robotics teams qualified for the state championships.

Team 5106E with robot Eduardo, driven by juniors Miguel Kirsch, Ian Martin and Hayden Miller, also qualified for the championships but were unable to compete due to a prior commitment.

The Kennett Coders coaches are Dan Richardi and Joe Riddensdale with mentors Laura Glassover, Paul Kirsch and Ron Sandstrom. More than 30 local students are involved in the program.

“Robotics is thriving,” Virginia Schrader, director of the MWV Career and Technical Center, told the Conway School Board at a recent meeting.

“We have a great group of students,” Riddensdale added.

Leading up to the state championships, the Coders participated in three competitions over four weeks.

“In each of these competitions the Kennett robotics teams dominated, winning the events and many of the individual awards including Excellence, Design, Judges and Skills awards,” said Sandstrom, who has been involved in the team since its inception, and two of his children, Cathy and Thomas, qualified for the World Championships on multiple occasions, with both going to California in 2014 and Kentucky in 2015.

The current cast of Coders worked five days a week on their robots to get ready for the Manchester finals.

“To compete at the state level the robots needed to be tuned to outperform the competition and code needed to be optimized to make the robots compete, making on-the-field adjustments using sensors and readings,” said Sandstorm.

The state championships brought together the best 40 teams from the Green Mountain State and the Granite State. According to Sandstrom, teams reached this level by winning a local tournament or qualifying award at the local event.

“To reach the Vex Robotics World Championships a team must win a state or national championship or qualifying award from that event,” he explained.

He added: “We have a lot of work still to do and will be meeting daily at the school to make world improvements to the robots.”

Sandstrom believes there is a certain characteristic that makes the Coders successful.

“They are in great shape, are focused and, most important, they are having fun,” he said. “Kennett coders have historically focused on creating smart robots, using sensors to make the robots self-aware and assist the drivers during matches to score or locate scoring elements faster than the competition. To help other schools this year we created a site for coaches to share code and insights. This past year we posted the code used by 5106C to go to last year’s worlds to help the other teams and raise the level of competition in our region even higher than it already is. We plan on doing the same this year.”

This season’s robotics challenge game was called “Tower Takeover,” which, according to the VEX website, “is played on a 12’x12’ square field. Two Alliances — ‘one’ ‘red’ and one ‘blue’ — composed of two teams each, compete in matches consisting of a 15-second autonomous period, followed by a 1:45 driver-controlled period. The object of the game is to attain a higher score than the opposing Alliance by placing cubes in towers or scoring cubes in goals.

VEX competitions are the fastest-growing competitive robotics programs for elementary, middle and high schools and colleges, with nearly 20,000 teams from 45 countries participating worldwide. The competition season culminates each spring with the VEX Robotics World Championship.

Kennett has become known for its innovation in match competition and strength in software coding skills. This showed at the 2019 World Championships, where Kennett tied for the most autonomous period points of any team in their division.

A Go Fund Me page was set up Tuesday to help defray the estimated $5,000 to send the Coders to the World Championships. Within three hours, $660 had been raised. You can donate at tinyurl.com/vcu6tdl.