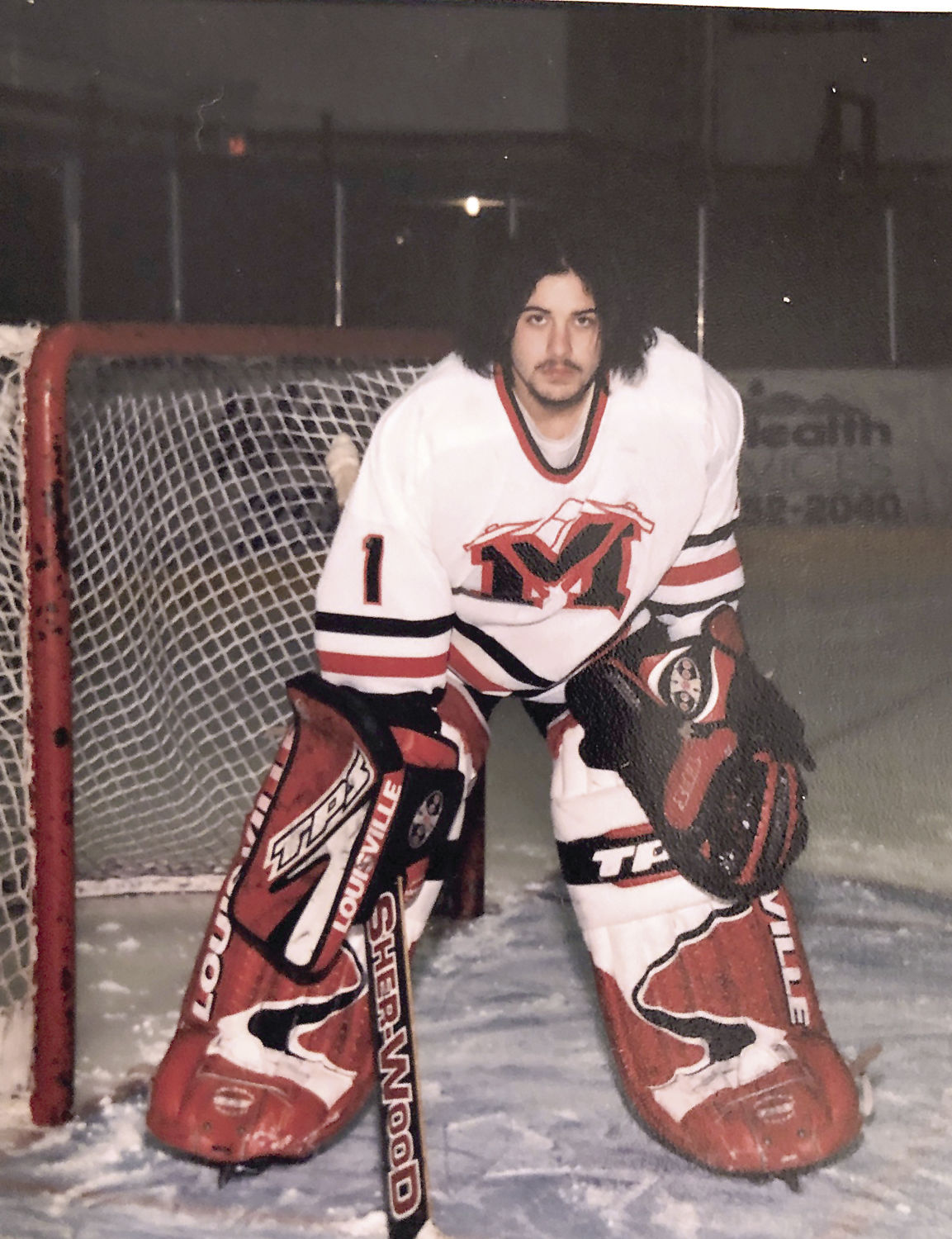 Dan Croteau was the starting goalie for Berlin High from 2000-2004. He took great pride in representing the community. (COURTESY PHOTO) 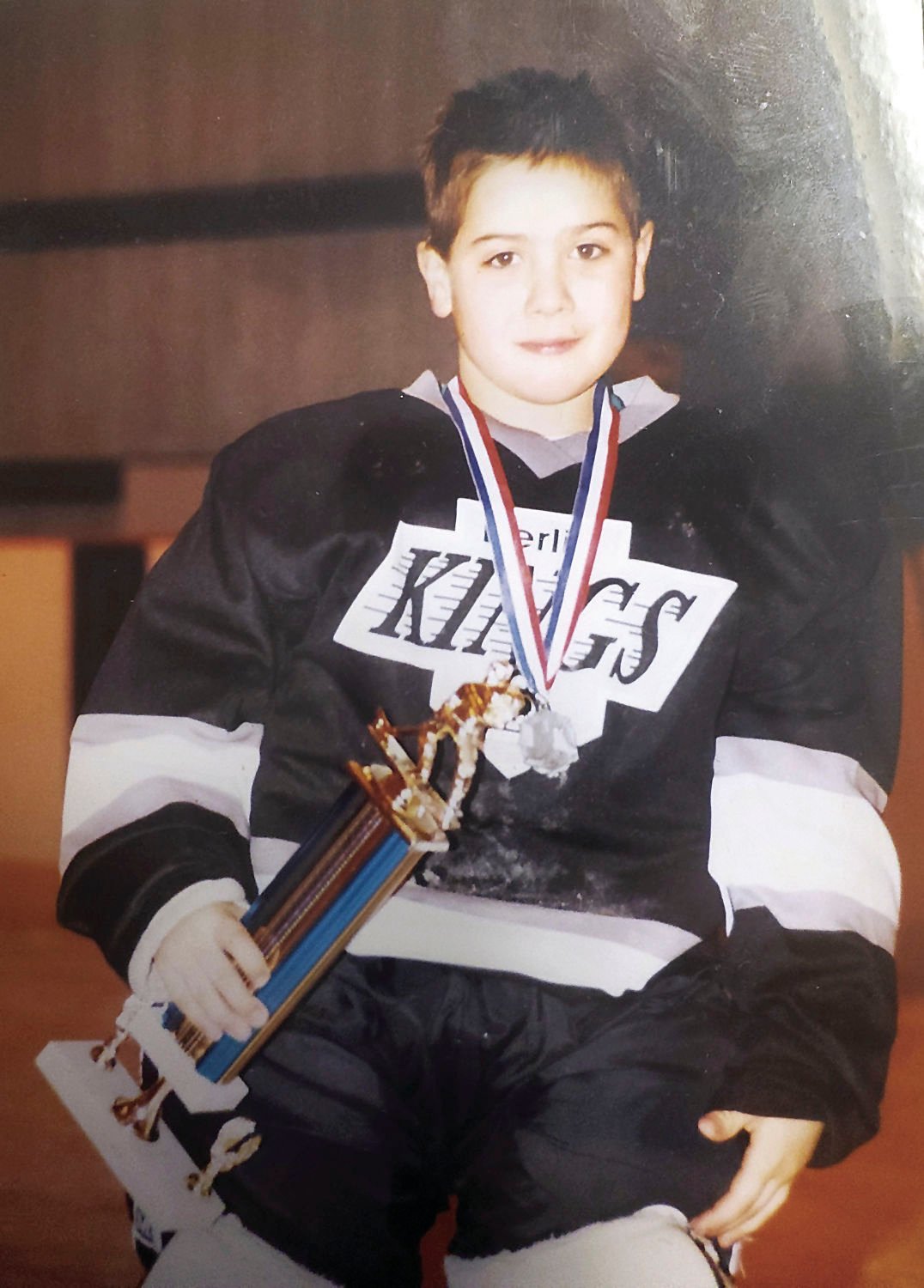 From 1992-2000 Dan Croteau was a member of the Berlin Youth Hockey Kings. (COURTESY PHOTO)

Dan Croteau was the starting goalie for Berlin High from 2000-2004. He took great pride in representing the community. (COURTESY PHOTO)

From 1992-2000 Dan Croteau was a member of the Berlin Youth Hockey Kings. (COURTESY PHOTO)

Today I am featuring Berlin's Dan Croteau as my next "Goalie Challenge" narrative. He is a guy I am familiar with and have been since my days of coaching him in Cal Ripken (minor and major leagues) All-Star teams. He had several things going for him as an athlete that always (and still does) impressed me. He was a "hard-nosed" kid, who wasn't afraid to get dirty, and he did at the hot corner and as a catcher, thus the affectionate, positive nick-name "pigpen.”

Dan always played with heart, did not enjoy losing, was a great teammate and enjoyed keeping everyone in the game with his constant positive baseball "chatter.” He brought that to his career as a hockey goalie, too!

Dan began his career as a Berlin Youth Hockey forward, not a goalie, but changed when before their first game they didn't have a goalie.

"One of my teammates stepped up and said he would give it a try as the goalie and we ended up losing that game 22-1 against the Rochester Blackhawks,” he recalled.

As mentioned the boy hated losing by any score but that one was "An embarrassment to us players, coaches, parents and the city of Berlin. That is when I took it upon myself to never let that happen again and I did it by approaching my coach at the time Peter Allain and asked him if I could give it a try."

The story goes that Coach Allain was hesitant at first but Dan was so persistent and determined to be the net-minder that he eventually said “OK why not?"

"Our next game was against the defending champions, Concord Capitals, in Concord at the Everett Arena,” Dan explained. “Even though we ended up losing the game 2-1 in overtime, I had 21 saves in the contest and from that point on I was the starting goaltender."

From 1992-2000 Dan Croteau was a member of the Berlin Youth Hockey Kings and then played for the Berlin High School Mountaineers from 2000-2004.

"I owe all of those guys a big 'thank you' as they all contributed in a big way to any success I had as a goal-tender,” Dan said.

The types of injuries Dan endured in his career included mostly lower-body injuries especially to the knees, one particular injury was caused by a slap shot to his left knee that worked its way beneath his pad. Although he does have permanent knee issues from playing goalie, he said, "it helped me stay in the best shape of my life."

There were many great players who Dan played with but he named guys like, "Brian Dumoulin who was a beast and a sniper out on the ice. He was hands down the best forward I played with in my high school career. Next, my top defenseman had to be Chad Brodeur, a smart player and smooth skater, who I could always rely on to make a big hit or sweep away a rebound. Chad was extremely smooth on his skates and very difficult to get around.

“I also wanna give a shout out to my enforcer Kyle Jacques, as he was a big, tough kid who didn't like anyone too close to me or my crease. He was one I could always count on to physically clean out the front of the net, so I could see the shot coming. Finally big Meesh — Jay Michaud — my "ride or die" out there on the ice. He was a great two-way hockey player who always had my back."

Throughout Dan's youth hockey career he consistently made the All-State team but a major highlight came when he was selected to the 1993-1994 All-State team. That year he played alongside goaltender Brian Foster who went on to be a four-year starter at the University of New Hampshire and a Florida Panthers draft pick.

Also on that team was a defenseman named Mike Green, who later played for the Detroit Red Wings. Another All-State selection that year was Nate Thompson, who played at UNH and then went to the NHL with the Pittsburgh Penguins, Anaheim Ducks and Montreal Canadiens.

"Playing alongside those guys was a major highlight of my career, as was beating the Concord Crimson Tide 3-2 on senior night at the Notre Dame Arena,” Dan said.

Finally, when asked if becoming an ice hockey goalie was a good choice, the response was:

"Absolutely, due to the fact I have always thrived and enjoyed high-pressure situations and being a goalie puts you there regularly. I would do it all over again, in a heartbeat, as it was definitely one of the best times in my life. All of the great memories and good friends I have made along the way certainly molded me into the man I am today."

Well-said Dan and thanks for responding to the challenge and sharing a bit of your story.

Berlin-Gorham No. 1 team split a doubleheader with Great Bay in Stratham on Sunday, losing 10-9 in opener before bouncing back to take the nightcap 12-6.

The Road Warriors, minus a couple of starters, gave up eight walks, and committed enough errors to give the hosts nine unearned runs on their way to the win. Jeremiah Dow and Karter Deming pitched well, giving up five hits and an earned run.

Game 2 had Kameron Huntoon and Brody Labounty combine for the win on the mound with some solid pitching. They got some help with defensive gems from Carter Poulin, Landyn Croteau, Isaac Langlois and Dow. Croteau, Labounty and Anthony Pizzuto had two hits apiece.

Coach DJ Johnson said, "This team is still trying to find its identity and play as a team, but I did see some signs of us getting into a good baseball groove and beginning to play up to its potential.”

The B-G2 team had the weekend off. Both teams are scheduled to play Tuesday night — B-G1 at Kennett; B-G 2 hosting Mt. Washington Valley — both at 6 p.m.