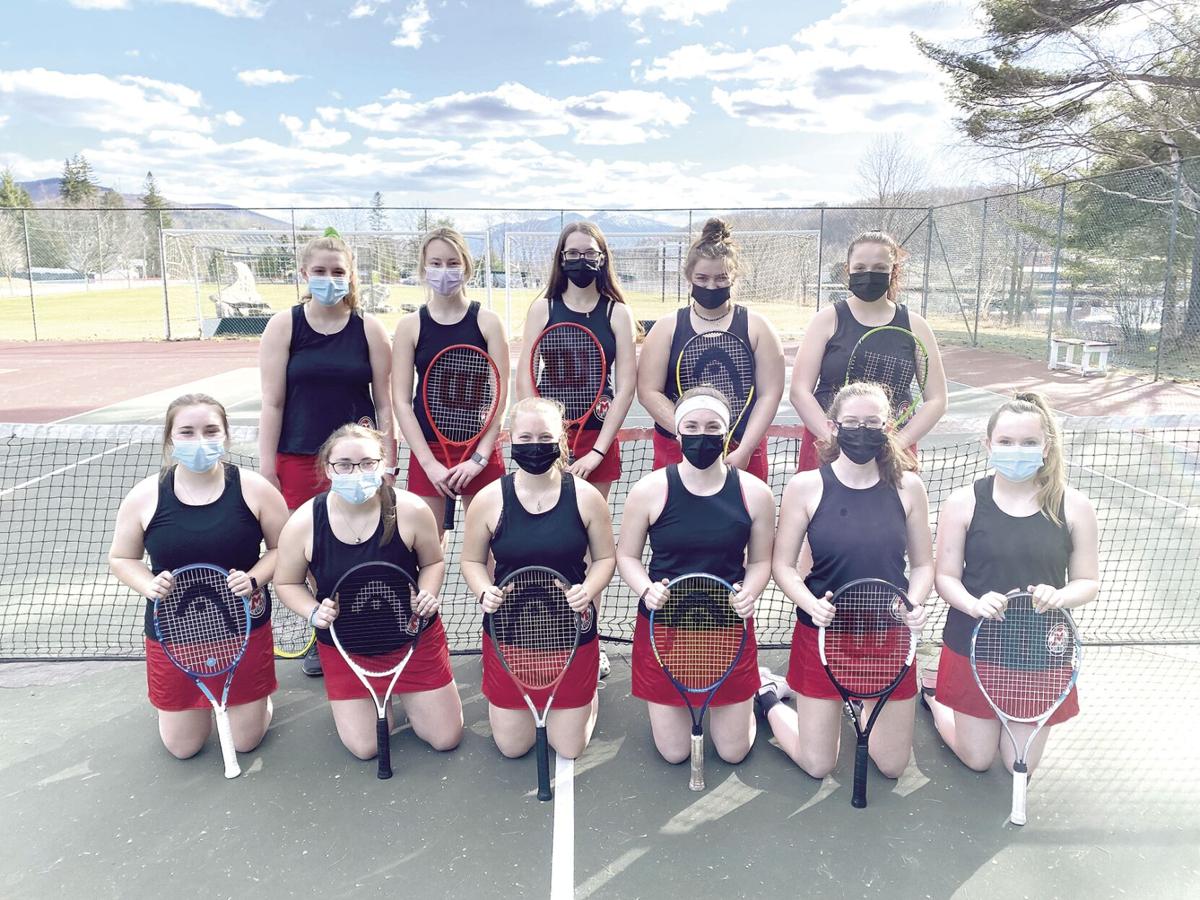 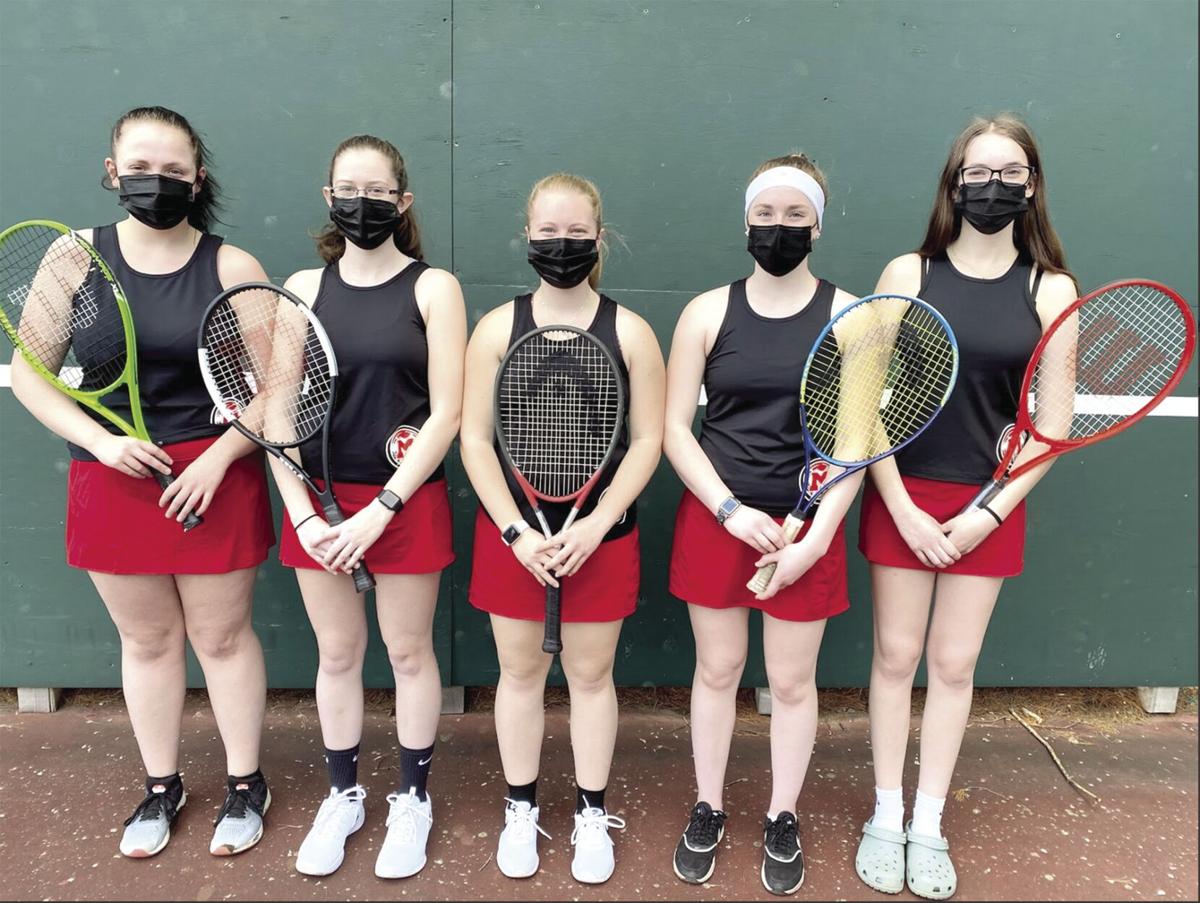 BERLIN — The Berlin High girls’ tennis team is serving notice — when you play the Mountaineers this season, expect to have your hands full.

The Mountaineers are already nearly a third of the way through their season, having played four matches in just six days. Berlin topped Moultonborough Academy 5-4 on the road to kick off a home-and-home series on April 13; won the rematch in Berlin the following day 6-3; topped Profile 7-2 at home on April 15; and fell 8-1 at White Mountains Regional on Monday.

Coach Andy Rancloes has a tennis team with some great senior leaders, including Kelly McCormick, Mickailey Walsh, Becca Pouliot and Emma Bergquist. The top four have been playing for three years and Emmelia has been with the team for two years.

Berlin has a lot of experience returning but as Coach "R" said, “Unfortunately, they missed last year, so we have a lot of work to do as the season progresses. We are going to treat every match this season as a way to self-reflect. We want to be ready when the postseason season starts.”

With five of the top six returning with experience, he “Believes we can really begin to work on the areas we are weak in. I want these girls to end their high school sports experience on a high note.”

There are two juniors and four freshmen, and the current seniors will be great leaders for the young girls.

In the first match of the season, that being the 5-4 advantage over Moultonborough, wins in singles came from Becca Pouliot, 9-8; Emma Bergquist, 8-4; and Emmelia Letendre, 8-1.

In doubles, the tandems of MicKailey Walsh and Kelly McCormick won 5-4, and Tiah Turmel with Letendre won handily 8-1, to give the Mountaineers the season-opening win.

Coach Rancloes said, "It was great to see the girls out there playing since it has been 2 years since they got to compete. We had first-game jitters but overall they played hard. Becca went into a tie-breaker and was able to hold on, 9-8. We also had four girls who made their varsity team debut."

The 6-3 win the following day, against Moultonborough, again, had Pouliot, 8-0; Bergquist, 8-3; Kadence Gendron, 9-7 (she was down 4-0 at one point but came back nicely); and Letendre, 8-1, all winning their singles matches with Becca and Kadence 8-4 winner in doubles and Turmel/Bergquist won 8-2 to help cement the team's win.

The third game in three days, last Thursday, resulted in a much easier 7-2 win over Profile, thanks to big wins by McCormick, 8-4; Pouliot, another tough 9-8 match-winning in a tie-break; Bergquist, 8-0; and Letendre, 8-6.

Three wins in the double's competition secured the victory for the Mountaineers, and they came off the rackets of Walsh/McCormick, 8-6; Pouliot/Gendron, 8-5; and Bergquist/Letendre 8-1.

"The girls were super-tired after three games in three days but they played hard,” said Rancloes. “We need to work on serving but every day we are making progress, and have had a great start. I am proud of the girls."

He added: “Becca had two tie-breaking wins in three matches, which was impressive. The double's teams have been quite successful thus far, having won seven and lost two in those three games.”

Rancloes wants his team “to understand that we are a family and when this is their team they will continue that tradition. I know our seniors will be excellent role models for the young girls. I believe that girls tennis is on a very strong path and we will be able to compete at high levels for a while."

As a final statement, Rancloes said, "Our goal will always to push as far as we can; we will continue to work on doubles. This is where matches are won or lost. The girls will build confidence and grit as the season progresses. I'm very excited about this next chapter. It's been two years since these girls have been part of the tennis team but it feels like we have never skipped a beat!"