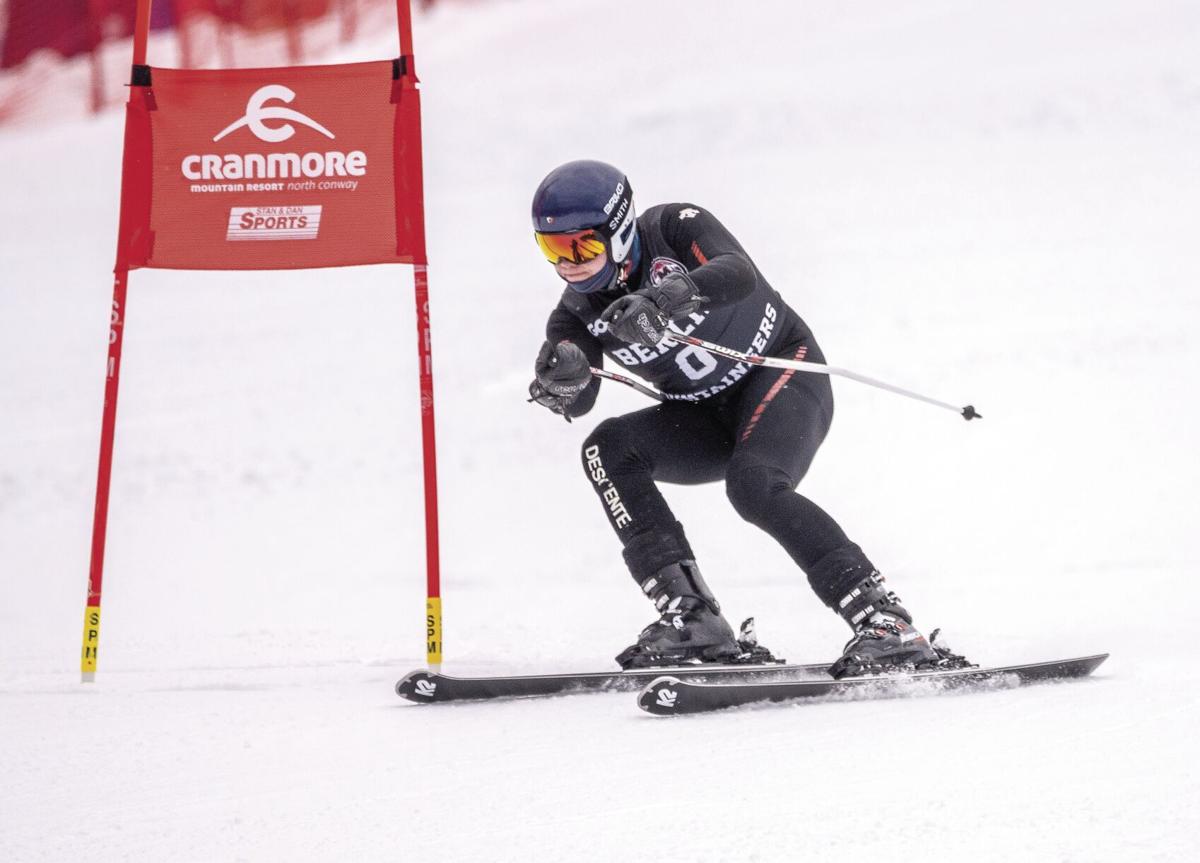 Hayden Munce was the lone Berlin High representative to race in the Division III Alpine Championships held last Friday. He was 34th out of 59 racers in the giant slalom. (JOE VIGER PHOTO) 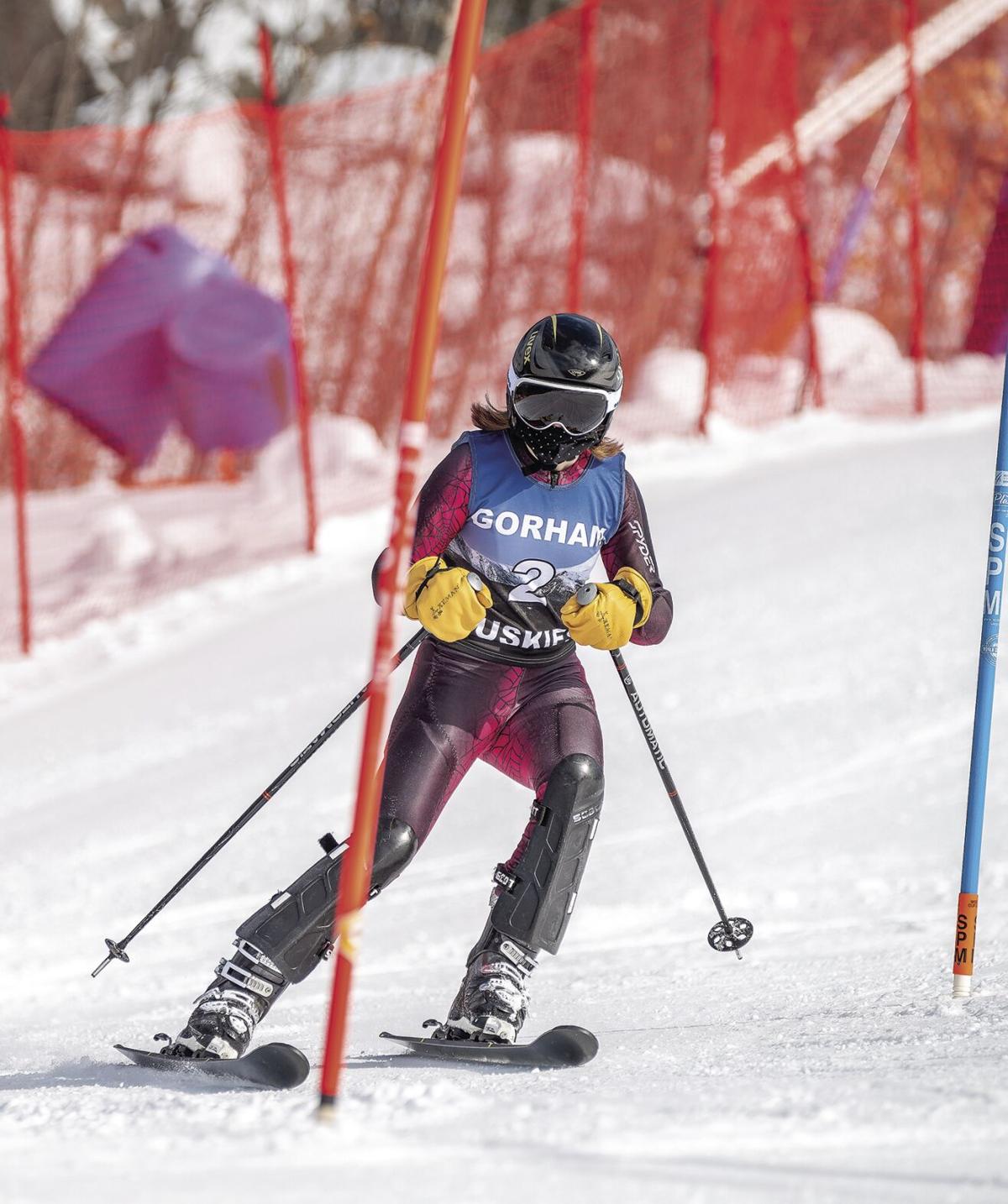 Hayden Munce was the lone Berlin High representative to race in the Division III Alpine Championships held last Friday. He was 34th out of 59 racers in the giant slalom. (JOE VIGER PHOTO)

Hello to all. I have lots of recent games and meet action to report and will start with this: I am presently working on a story of a long-time teacher/coach at Berlin High School, Rod Rand. If any of you readers out there have something unique to share, please send it to me at steenm6@aol.com. I am especially looking for information on former BHS skiers during his coaching era. Thanks.

Speaking of skiing, Berlin High’s skier Cora Treiss completed what I would consider a very successful season of Nordic skiing, specifically cross-country/skating, with a final race at Proctor Academy, where she finished 32nd out of 60 racers.

Her coach, Rick Triess said, "Even though she looked good her time was somewhat disappointing. The Kearsarge team that won the meet was loaded with some amazing middle-schoolers, and there was lots of support from opposing fans for Cora." That is the nature of cross country skiing and running. Rick went on to say that, "Cora was ranked 29th in the State of all U18-20 racers, which was 5 places out for a berth on the Team NH, definitely a goal to set for next year."

Great job Cora! Hopefully, as time goes on more skiers from Berlin will join up with the program.

Hayden Munce was the lone BHS representative on the Division III Alpine Championships held last week. He was 34th out of 59 racers in the giant slalom and then was disqualified on one of his slalom races so he did not place. As

Coach Robbie Munce said, "Hayden started out the season in the back of the pack but worked his way up to the middle in his first season of competition. Many DIII coaches commented that they were 'glad to see BHS back' and hopefully more racers will join up next year."

Years ago, in my era and later, Berlin High had excellent Nordic and alpine ski teams with plenty of competitors.

Coach Munce said, “They had solid building blocks for the next year as all three girls progressed nicely in their skiing during the season.”

Thanks, Robbie for keeping me informed of your teams' results throughout the season.

The Berlin-Gorham boys’ hockey team won two games in a home-and-home series with Kingswood, besting the Knights 7-3 in town and 6-2 on the road.

Game 1 had the Mountaineers wasting no time, scoring three goals in the first period. Griffin Melanson's, glove side, top shelf score with assistance from Jamison Walsh and Mike Cote, (3:19), was first followed by Tyler Rousseau from Brayden Riendeau and Cam Pake, (8:52), and then at 10:26, Melanson again with help from Walsh and Dom Paradis.

They continued the scoring when at 4:53 of the second period, Riendeau scored off a rebound on a Carter Poulin slap shot, and later Riendeau scored again (12:02) on a power play, thanks to nice passes from Ben Estrella and Brody Duquette. Before and after that last goal, the locals got a bit lax and let Kingswood back in with two goals to narrow the gap to 5-2.

Twenty seconds into the final period, the Knights scored again to make it 5-3, before Berlin-Gorham's Rousseau got it back on assists from Estrella and Riendeau, at 1:25, There was no more scoring until the 9:59 mark as Rousseau registered a hat trick with the assist coming from Pake. J. Oleg Sheahan had 43 saves and Anthony Pizzuto stopped 12.

Saturday night, the Mountaineers scored two goals in each of the three periods to win that game 6-2. The teams were tied a 2-2 after one. The B-G goals came from Jamison Walsh, assists going to Griffin Melanson and Dom Paradis, and Carter Poulin from Walsh and Melanson. Second-period action saw Mike Cote get into the scoring column thanks to Walsh and Melanson, and then Tyler Rousseau from Poulin and Ben Estrella.

Even though Estrella has been in the mix offensively with a ton of assists, he hadn't scored a goal this season until he hit the back of the net in the final frame, aided by Riendeau and Paradis. The final goal came off the stick of Cote and it wouldn't have happened without help from Melanson and Estrella. Berlin-Gorham had 43 shots on Sheahan.

Coach Mike Poulin said the boys, "Played well and it was nice to see Melanson (four assists)and his linemates of Cote (two goals) and Walsh (a goal and two assists) play well. Estrella had his first goal of the season and Kolin played a solid game in between the pipes with 21 saves."

The Mountaineers are now 8-1.

The locals were up 6-2 on the Cardinals down south, until the tide changed as the hosts scored two quick goals towards the end of the middle period and then exploded for 4 in the final period to beat the "upset-minded" Mountaineers.

At the Notre Dame Arena a few days later, things started out as bad as they finished the previous game as the visitors scored at 26 seconds of period one and followed that up with 3 more goals before heading to the first period intermission up 4-0.

The Mountaineers recovered nicely scoring their first goal a the 10-second mark to start period 2. Jillian Hallee scored with a nice assist going to Sydney Chapman. They scored again at 2:50, when Abby Blais got the puck to Becca Pouliot who somehow backhanded the puck, even with what appeared to be an impossible angle, into the net to close the gap to 4-2. Low and behold on a power play and at 6:26, Sophia Shoenbeck scored on an assist from Chapman (again) to make it a one-goal game. At that point in time, Berlin-Gorham definitely was on a roll but it ended abruptly when 12 seconds later and 2:05 after that the Cardinals got two goals back to go up 6-3.

Third-period action wasn't much better as the Mountaineers could not muster much offense while the Cardinals scored two more goals to win 8-3. The 10-0 Division I leader has averaged eight goals a game and handed the locals their sixth loss of the season.

Believe it or not, we outshot the visitors 28 to 27. Luma Berry and Olivia O'Neil shared the goaltending duties for the hosts while Sarah King helped preserve the win for Bishop Guertin. Lindsay Hult had half of the goals.

Senior players Sophia Shoenbeck, Mickailey Walsh, Becca Pouliot and Grace Bradley along with manager Aubree Poirier were honored before their final regular-season home game. The Mountaineers currently sit at 2-6 in what will be an open tournament playoff.

In the warmer confines of the BHS gym, the Berlin girl's and boy's basketball teams won their doubleheader games against Canaan-Pittsburg, 44-31 and 58-39, respectively.

This was a good bounce-back game after the BHS girls had previously blown a 22-17 halftime lead over Division IV powerhouse Colebrook and being outscored 40-4 in the second half to lose 57-26.

The Mountaineers did come back and beat Canaan-Pittsburg 44-3, in Berlin even though the locals trailed 11-7 after the opening quarter. The middle two periods saw the hosts outscore the visitors 29-13 to help seal the win.

Makenna Baldarrama had a whale of a game on both ends of the court, totally controlling the glass and scoring 17 points, while the other Makenna, Peare, chipped in with 11. Sophomore Alexa Goulet had a great game also with six points and several key rebounds. Cusson, and Rayna Bourbeau had four points each, and Kelly McCormick finished with two. Hannah Cote had seven points, Jessi Tracy and Olivia N'Degwa six points apiece. The team’s record is now 4-2.

Jared Lauze's BHS boys’ basketball team finally got into the win column with a 58-39 win over visiting Canaan-Pittsburg. Berlin was up 13-8 after one and increased that lead to 31-18 at halftime. Both teams were deadlocked at 7 apiece in the third period and then they opened up the offense scoring 34 points with Berlin netting 20 in the quarter to C-P’s 14.

The win lifted the Mountaineers to 1-7.

Owen Hawkins and Jacob Cooney were honored on senior night for their commitment and dedication.

The Gorham High girl's basketball team had a 10-point win over Profile last week in a game that Coach Joe Cassady said, "Even though we were shorthanded, we managed to play and win."

Gorham had a slim 14-13 halftime lead but a nine-point advantage, 20-11, in the second half gave them that 10-point margin and victory.

Coach "C" went on to say, "We had a good first quarter, not so good in period 2, hence the one-point advantage. We were only up by 2 points heading into the final period, and a strong offensive and defensive effort resulted in a 13-5 advantage and the 34-24 win."

Just a reminder that many of the local high school games can be viewed on NSN.net. Just go to that site and check out the upcoming schedule. It's the next best thing to being there!