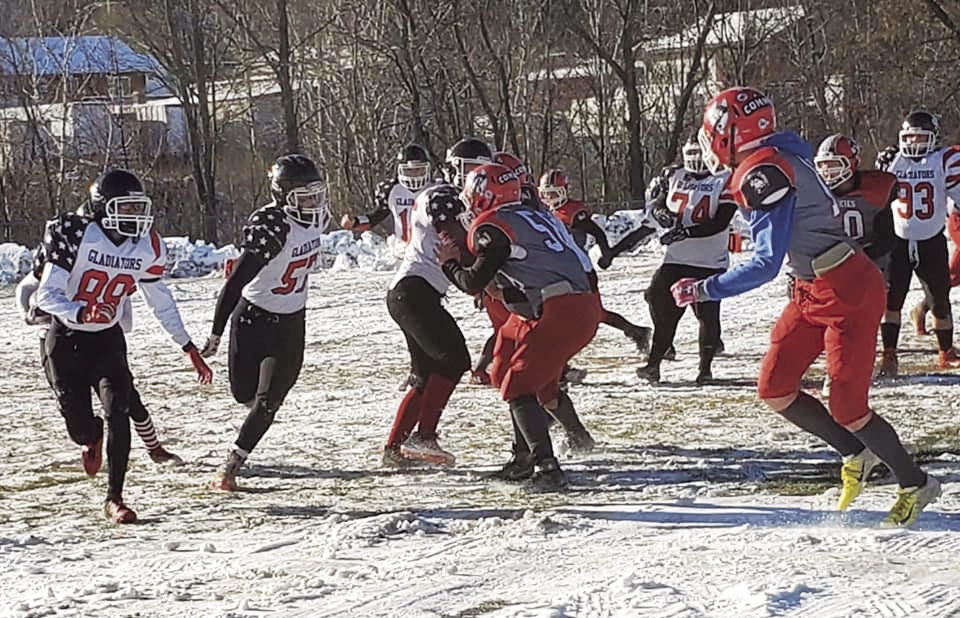 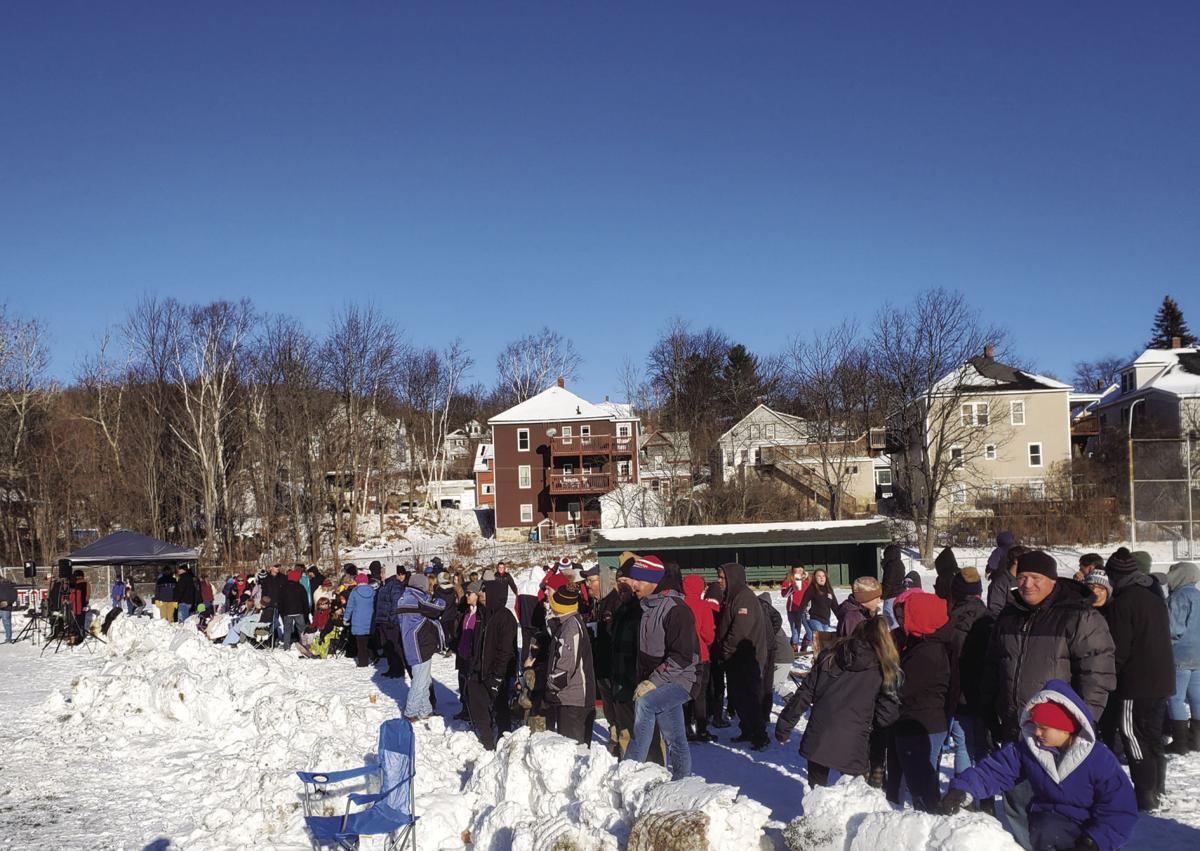 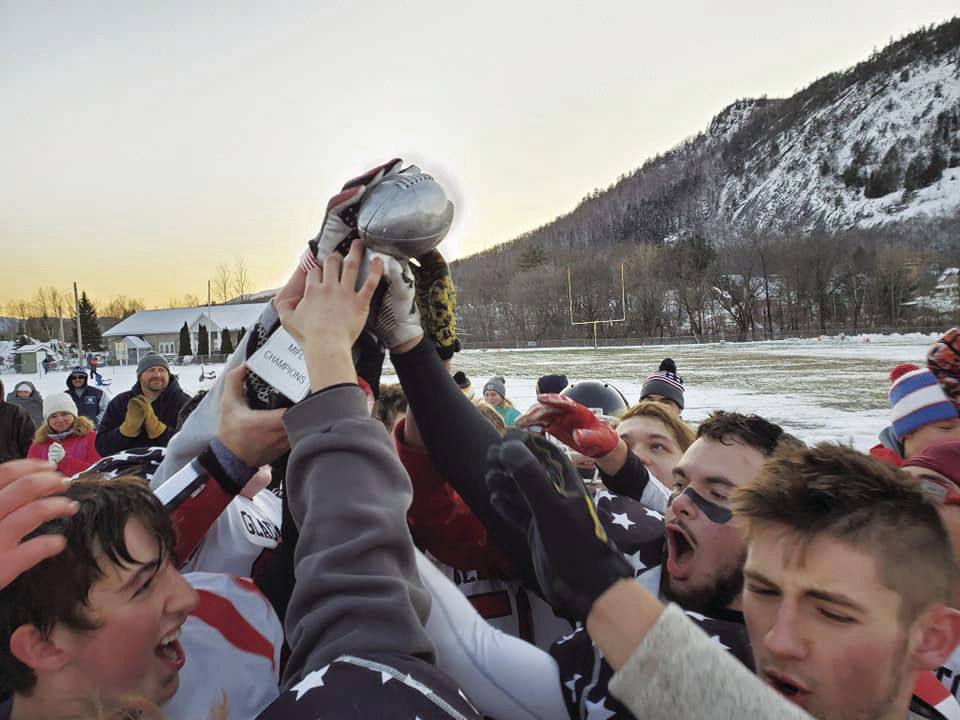 BERLIN — The Androscoggin Valley Gladiators Football Team copped the 2019 Independent League Football Championship this past Saturday, with an 18-0 shutout of the Aroostook Huskies, before a decent but cold crowd.

At Memorial Field in Berlin, the weather and field conditions were “normal” for a mid-November game, with bright sunshine (for the first half), shade (thanks to Mount Forrest) in the second half, a cool, steady breeze and a semi-frozen tundra of a field. The local recreation department had done an outstanding job in clearing the field of the snow that had fallen earlier in the month. Hopefully, my notes written in freezing cold temperatures, with gloves on and a partial brain freeze will end up being correct as I report on the game.

Those adverse conditions did affect play, as did some injuries, especially to the Huskies, in this hard-hitting defensive game.

There were a number of fumbles and interceptions by both teams throughout the game, I can remember playing under those conditions and loving it, as I am sure most of the current players did too.

Early on the Gladiators had a big pickup on a running play, were driving with things looking good until a fumble was recovered by the Huskies deep in their territory. A bad snap by the visitors and a fumble recovery by the host team gave them excellent field position inside the 10-yard line, with Forest Pribbernow scoring on a quarterback keeper to give the Gladiators a 6-0 lead.

The Gladiators held the Huskies on the next series, and took over on downs, with decent field position. Pribbernow had a run for a first down, then threw a nice pass with a substantial gain to Jacob Cooney, but shortly after a local fumble was recovered by Aroostook.

That ended Period 1, but the Gladiators took over on downs again early in the second quarter, when two great runs by Pribbernow and Greg Brown gave the Gladiators good field position.

Another great run by Pribbernow was nullified with a “block-in-the-back” penalty, but the combination of Pribbernow to Cooney netted a first down, goal-to-goal for the locals.

Victor Morales caught a touchdown pass to give his team a 12-0 lead. Once again the 2-point conversion failed. Shortly after, and just before halftime, the Gladiators just missed intercepting a Huskie pass, but then took over on downs.

I was about ready to put my note pad down, go in where it was warm, when the Huskies got the ball back and No. 74, Jared Johnson, intercepted the ball deep in Huskie territory and took it in for a touchdown to give Berlin an 18-0 lead headed going into the halftime break.

The sun went down behind Mount Forest at halftime, which just added to the uncomfortable conditions, and it did show as no more scoring took place in the second half, although most of the action did take place in the Huskies’ defensive end of the field, with the Gladiators dominating the action.

A small bench by both teams resulted in lots of guys going three ways — offense, defense and specialities, and a few key injuries for the Huskies certainly hurt them.

There was a nice, sustained drive by the Gladiators that was stalled in enemy territory and they had to turn the ball over on downs.

Pribbernow and Brown had some nice runs but they could not penetrate the end zone.

The Huskies did go for it on a fourth down deep in their end, which failed, but Berlin could not capitalize.

Later the Huskies mounted a sustained drive and had the ball inside the 10-yard line, first and goal, but a great defensive effort, one particular being a 8-yard loss, put the Huskies 12 yards away.

A last minute attempt to score was thwarted when Anthony Poirier intercepted the ball in the end zone to end the game and preserve the shutout.

Congratulations to the entire Androscoggin Valley Gladiators Football Organization for an outstanding season and a hard-fought win against a talented team, the Aroostook Huskies, in the Championship Game.