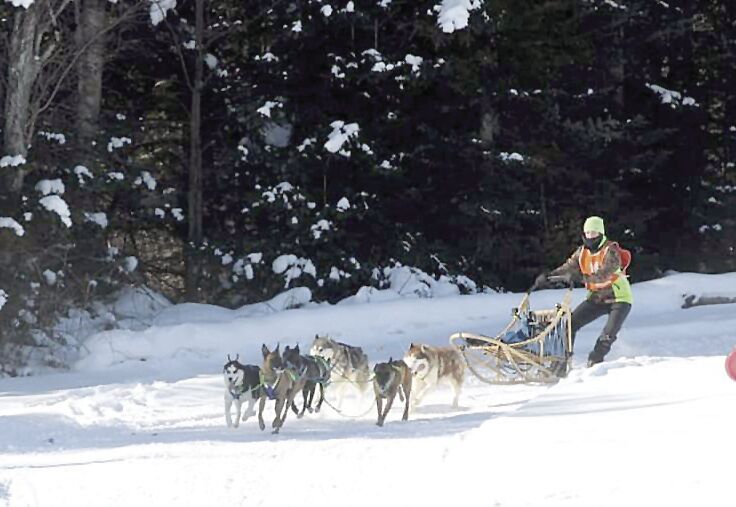 Sled dog races were last weekend at The Inn at Oxbow Acres in Milan, formerly the Mahoosuc Inn. Here, Christina Morin competes with her six-dog team in the 12.2 mile race. They finished third on Saturday and fourth on Sunday. (COURTESY PHOTO) 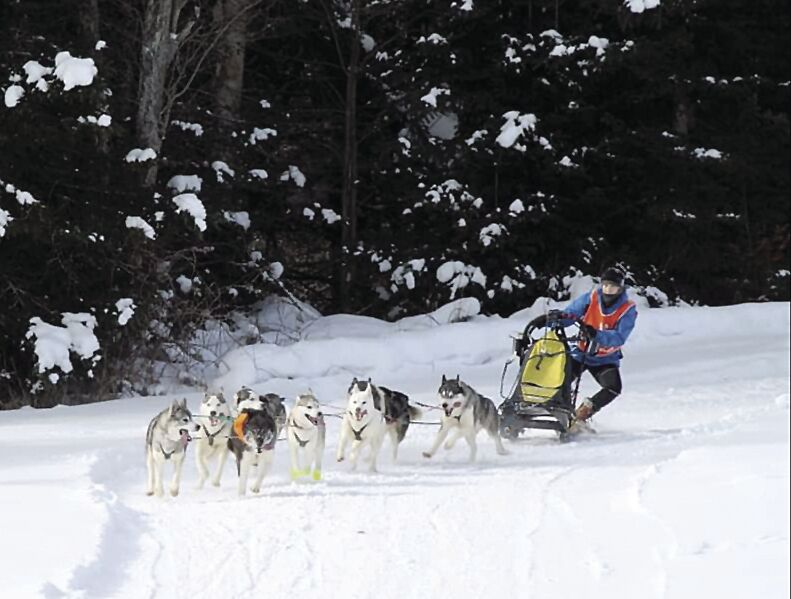 Sled dog races were last weekend at The Inn at Oxbow Acres in Milan, formerly the Mahoosuc Inn. Here, Kaitlyn Yacobucci competes with her eight-dog team in the 12.2 mile race. They finished fourth on Saturday and second on Sunday. (COURTESY PHOTO)

Sled dog races were last weekend at The Inn at Oxbow Acres in Milan, formerly the Mahoosuc Inn. Here, Christina Morin competes with her six-dog team in the 12.2 mile race. They finished third on Saturday and fourth on Sunday. (COURTESY PHOTO)

Sled dog races were last weekend at The Inn at Oxbow Acres in Milan, formerly the Mahoosuc Inn. Here, Kaitlyn Yacobucci competes with her eight-dog team in the 12.2 mile race. They finished fourth on Saturday and second on Sunday. (COURTESY PHOTO)

Good day to all of you.

Have you ever been so conscientious about not doing something that you do it anyway? That exact thing happened on Tuesday in my column when I credited Jameson Levesque with an assist in the Berlin-Gorham hockey game against Kennett (a 3-2 Mountaineers win).

Jameson was a pretty decent basketball player back a "few" years ago but would not qualify in terms of age and maybe hockey skills to play high school hockey, especially now. I meant to write Jamison Walsh, which I did later when he scored his first varsity goal. Sorry guys!

What a great tribute to and picture of Jules Roy, (in Tuesday's Sun) who passed away Jan. 27. The obituary told it all in a very sensitive and concise manner. I missed seeing Jules play high school and college hockey as I was in college and the military during those days. I did get to know him fairly well as teammates for a number of years in the local men's softball league and mainly with Fagin's Pub.

Even during Jules' struggles, whenever I would see him in town, he always knew who I was and we had great times reminiscing about those good old days and his hockey career. Ah, to go back to the days where we were a bit more innocent and more free from the sadness and struggles that life has.

And yes, as mentioned in the paper, he had an incredible memory and a great heart. RIP Jules! My thoughts and prayers go out to his family and friends.

The Gorham alpine ski teams competed at Loon Mountain on Monday and the boys did themselves proud with a third-place finish with a solid 359 points to 373 for Profile and 388 to the No. 1 team, LinWood.

The Mountaineers (3-2 in Division III) were 1-1 in their last two games with a nice 45-28 win over Inter-Lakes to start things off on Jan. 28. The Mountaineers had handled Inter-Lakes three days earlier (48-22) on the road, but as Coach Don Picard said, "It was much closer than our first of a home-and-home series."

At halftime, Berlin held a slim 19-17 lead but extended that to 33-21 in third quarter before a final period 12-7 advantage gave them the Mountaineers the win. Makenna Balderrama had a game-high 21 points, followed by Makena Peare with 13 (all in the second half) and Kelly McCormick with six.

In game No. 2, Berlin played much better against a Colebrook team (6-0 in Division IV) that beat it by 15 points earlier (59-44) in the season before losing 51-41 on Monday. Except for a slow start in the first quarter, which saw Colebrook jump out to a 15-8 lead, Berlin was right there until the end, being outscored by only three points, 36-33, the remaining three quarters.

Colebrook was led by Sage Smith with 21 points, while Samantha Howe added 19.

As Coach Picard explained, "We weren't able to match the intensity Colebrook showed in the first quarter but I was proud of the resilience we showed in battling back. Our quarter court defense was solid but we did give up too many transition hoops. We need to shoot it better and convert free throws at a better rate."

The Berlin-Gorham girls’ hockey team (0-4) lost a heartbreaker last weekend to St. Thomas-WNC-Dover 1-0, when they scored the winning and lone goal with 50 seconds or so to play in regulation.

Coach Craig Bartoli said the Mountaineers got a moral boost from this encounter after having lost 3-0 in the first meeting.

“That was the best girls’ goalie I’ve ever seen,” Bartoli said. “Everyone played great. We just need to find a way to score goals.”

Meanwhile, Berlin-Gorham boys’ hockey team lost its first game of the season 3-1 to Lebanon-Stevens-Mt Royal on Monday, while the Berlin boys’ basketball team lost on Monday to Colebrook 60-53. No details of these game were available at press time.

Sled dog races were last Saturday and Sunday at The Inn at Oxbow Acres in Milan, formerly the Mahoosuc Inn. The new owners hope to reopen in 2021.

Teams started heading onto the trail at 10 a.m. for a 12-mile race on trails maintained by the White Mountain Ridge Runners, who have done a great job grooming and maintaining trails. The races were hosted by North Country Mushers.