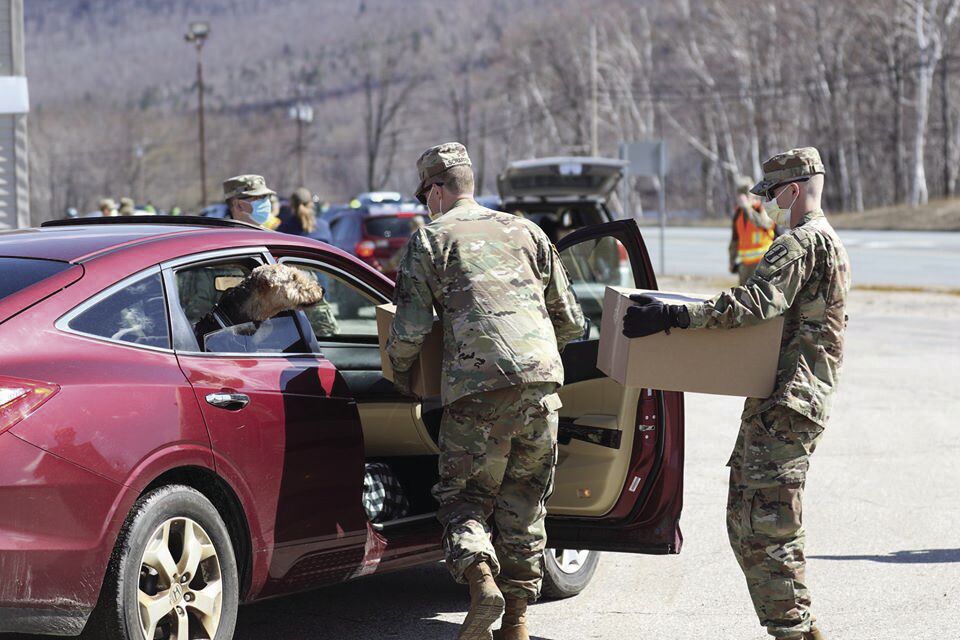 From left, Sgt. Justin-Allen Schaffer and Spc. Brendan Johnson of the New Hampshire National Guard load boxes of food during a mobile pantry in Gorham on May 2, 2020. The N.H. Food Bank returned several times throughout the year. (FILE PHOTO) 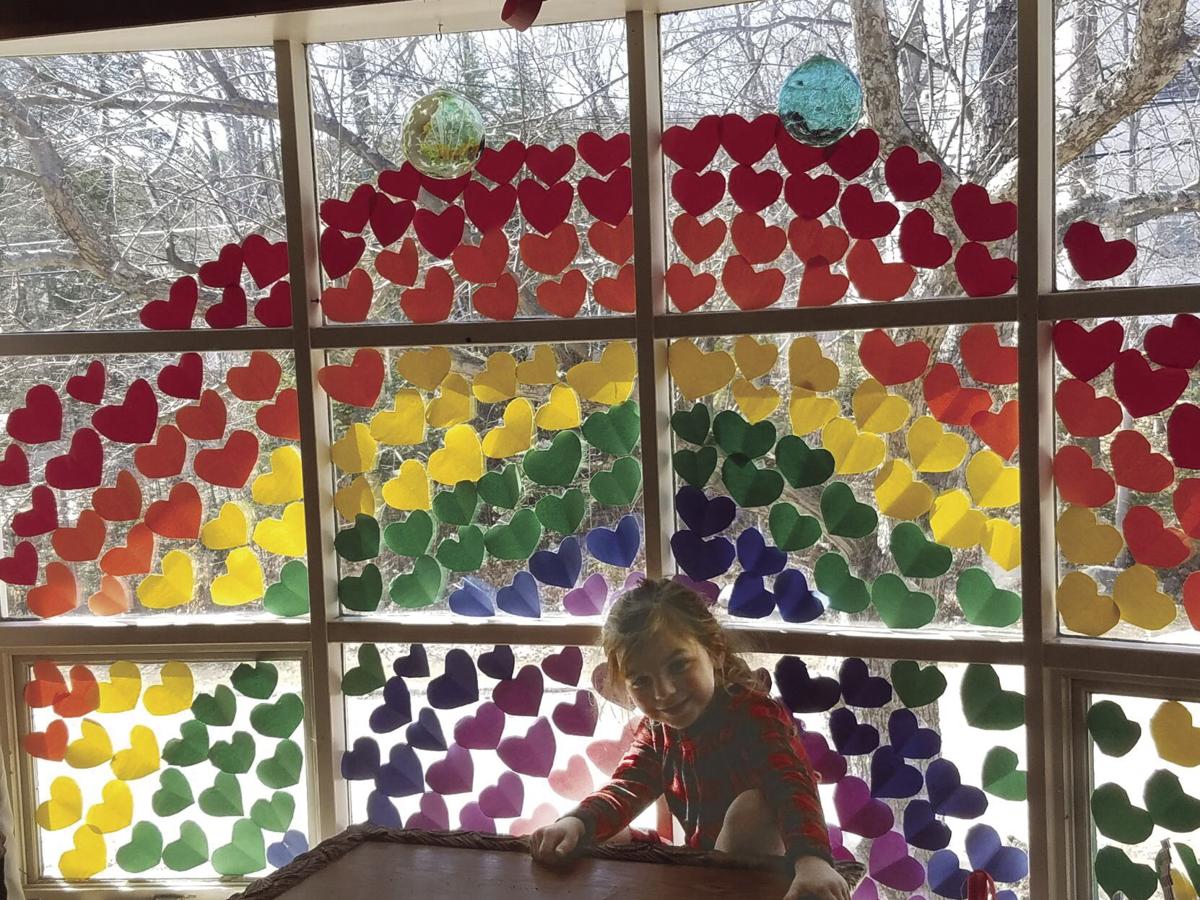 MaKenna Letendre (center) is seen in front of a “Hearts in the Window” movement to spread solidarity and hope. (FILE PHOTO) 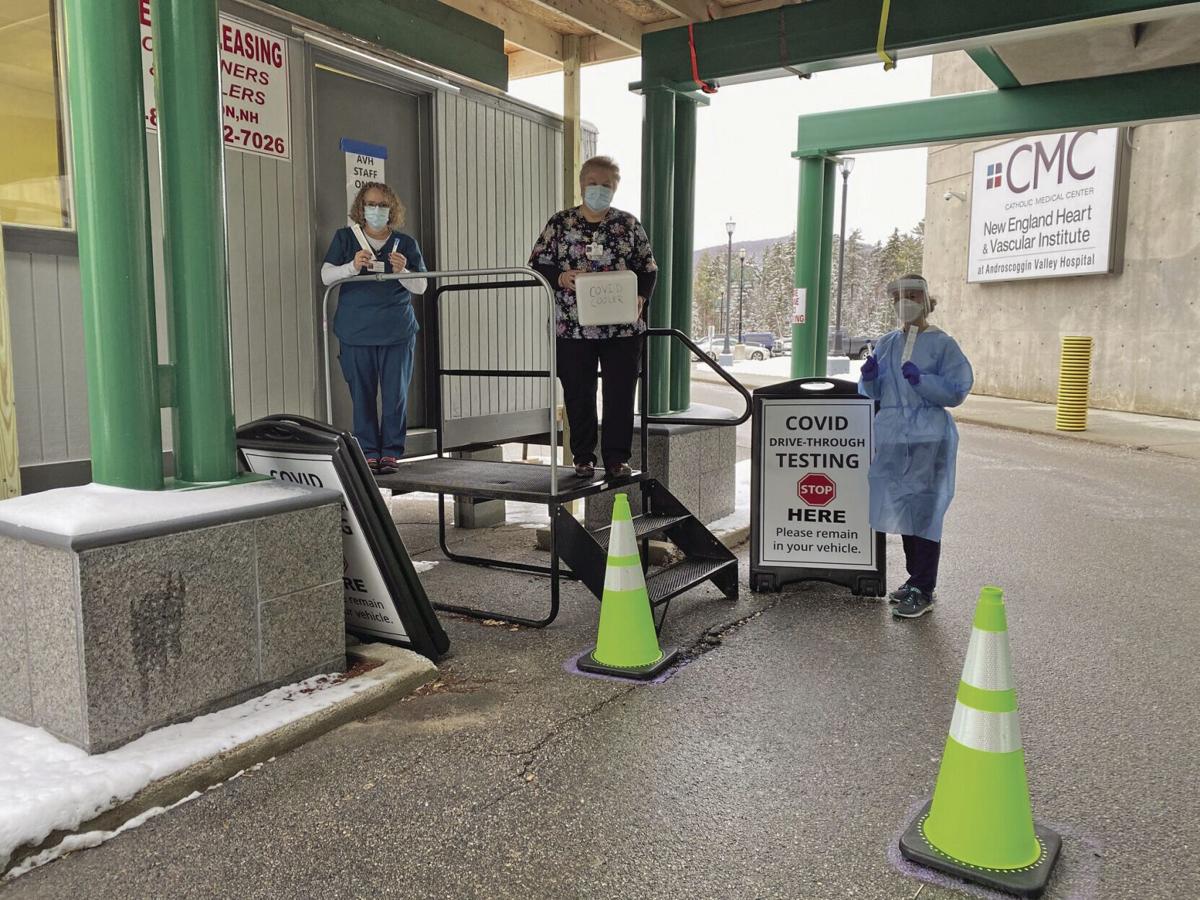 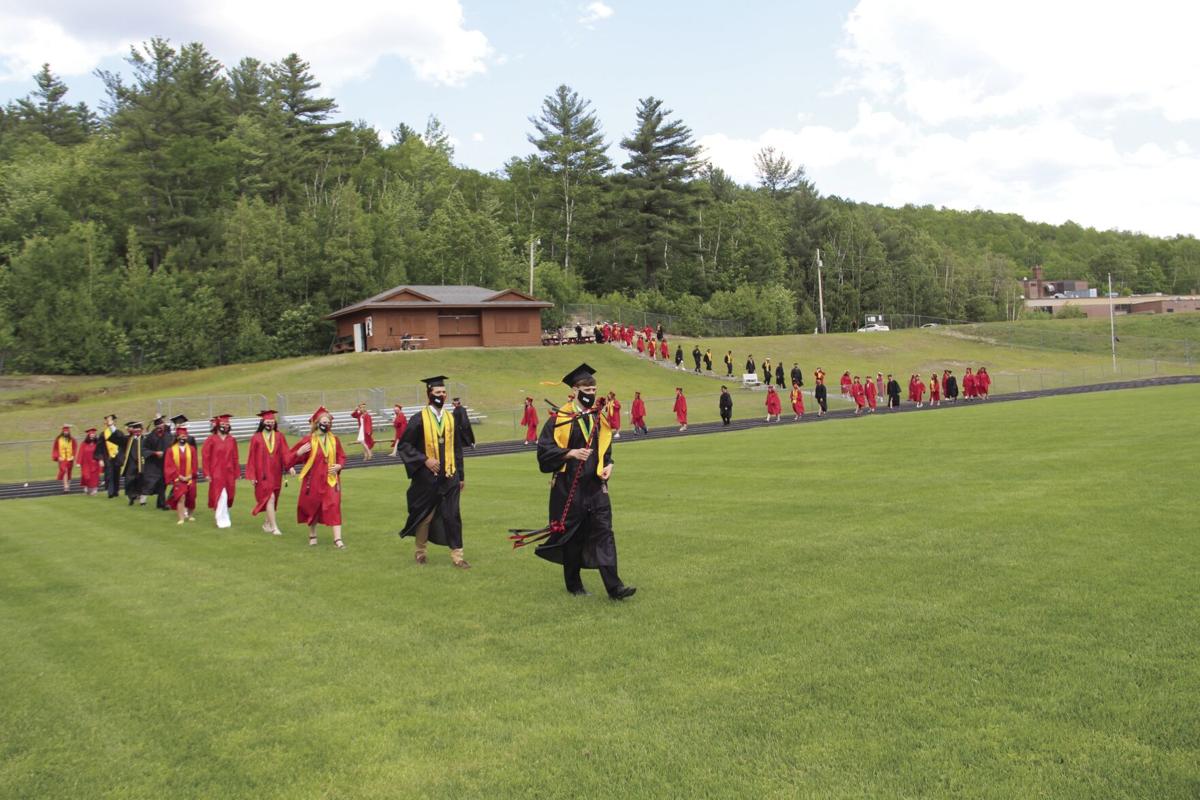 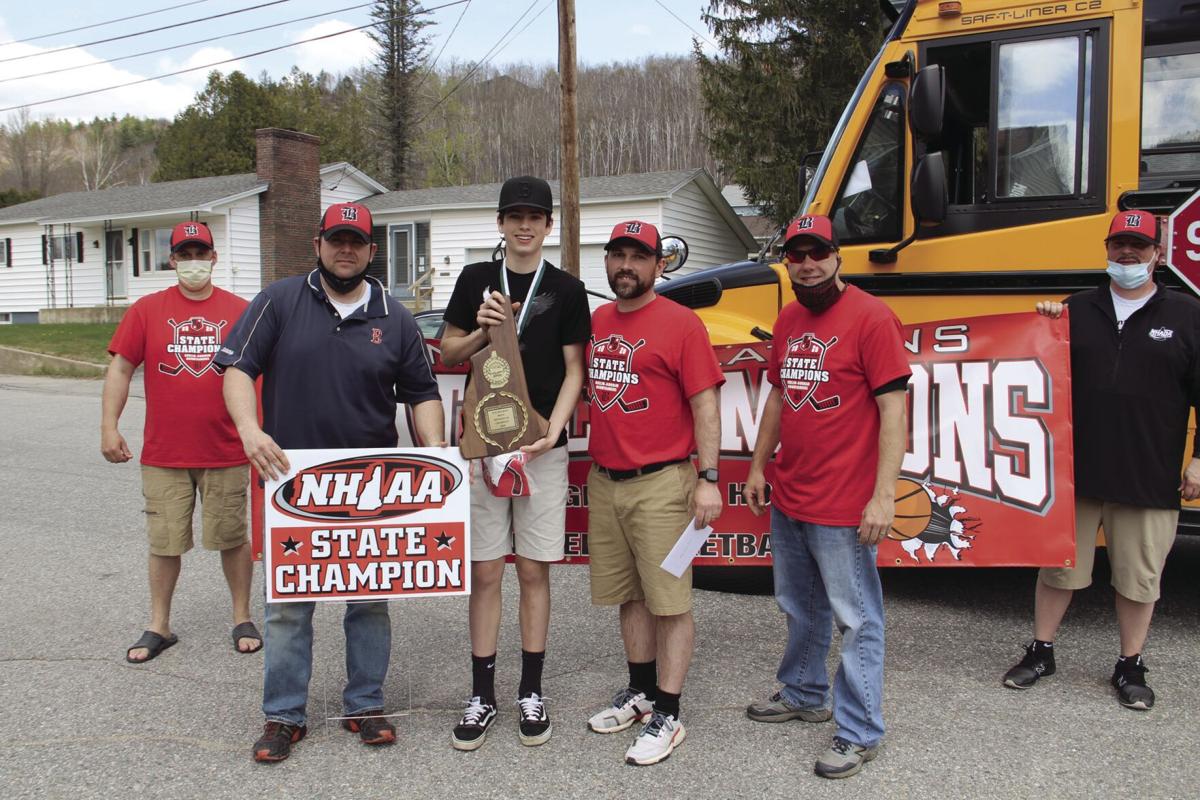 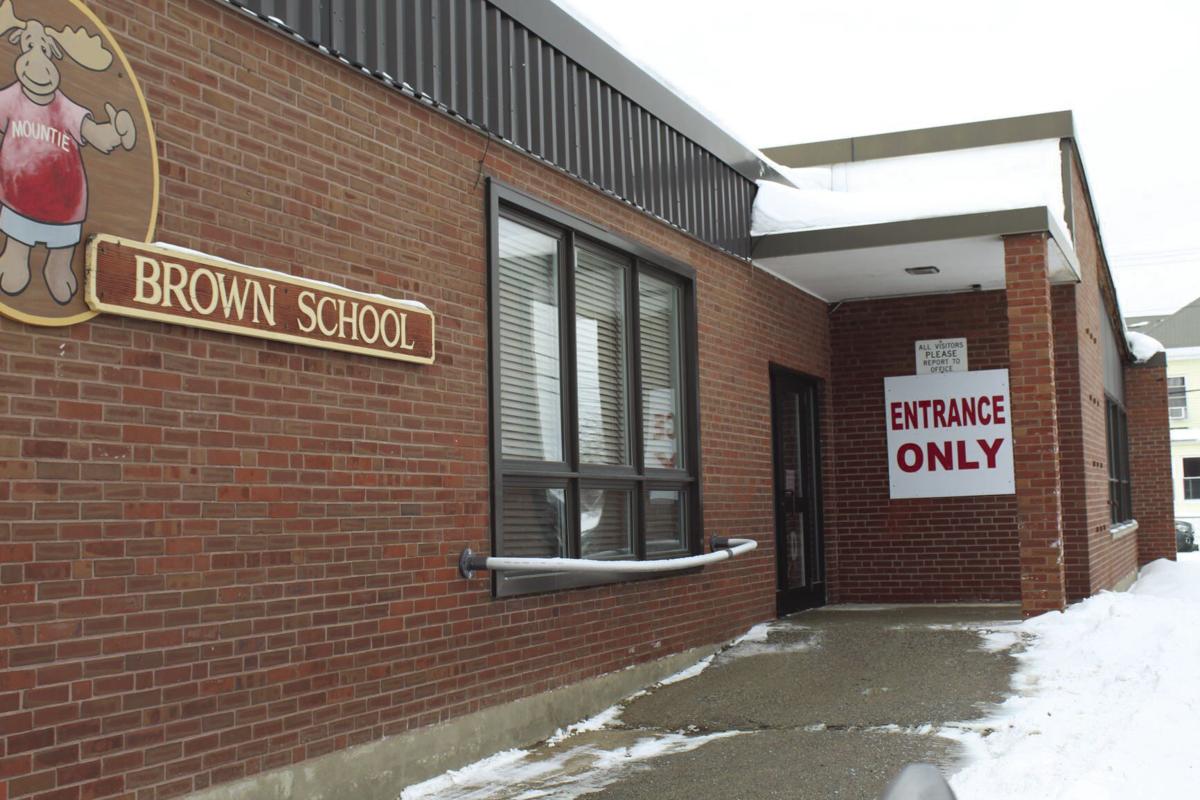 The former Brown School in Berlin is being used as the Androscoggin Valley Hospital's COVID-19 vaccination site. (FILE PHOTO)

From left, Sgt. Justin-Allen Schaffer and Spc. Brendan Johnson of the New Hampshire National Guard load boxes of food during a mobile pantry in Gorham on May 2, 2020. The N.H. Food Bank returned several times throughout the year. (FILE PHOTO)

MaKenna Letendre (center) is seen in front of a “Hearts in the Window” movement to spread solidarity and hope. (FILE PHOTO)

The former Brown School in Berlin is being used as the Androscoggin Valley Hospital's COVID-19 vaccination site. (FILE PHOTO)

ANDROSCOGGIN VALLEY— It has been over a year since Gov. Chris Sununu issued the emergency orders that closed schools and prohibited large public gatherings as the state acted to guard against the coronavirus.

The Androscoggin Valley had its first COVID-19 case on April 11, 2020 when the state Department of Health and Human Services reported a Randolph individual had tested positive.

Since then the state reports there have been 848 positive cases in the valley. Berlin has had 606 positive cases, Gorham 144, Milan 60, Randolph 12, Errol and Shelburne have both had 9, and Dummer has had 8 positive cases. Coos County has had a total of 1,540 test positive and lost 38 residents to the deadly virus.

The group also set an example for working as a community and the public responded. People delivered food and well wishes to those on the front line and the vast majority worn masks in public. Students did art work for the vaccination center and people donated money and food to local food pantries. Many ordered takeout food and made an effort to shop locally to help local businesses survive.

The warmer weather allowed people to get outside and move around. While the Androscoggin Valley Chamber of Commerce canceled its large summer and fall events and Gorham canceled its traditional Fourth of July festivities, people found escape in ATVing, hiking, paddling, and outdoor barbecues. After months of being closed to visitors, nursing homes opened to limited outdoor visits.

The number of positive cases, however, began to increase as the cold weather returned and people moved indoors.

The county’s worst outbreak began in late October and early November when four staff people at the Coos County Nursing Hospital in West Stewartstown tested positive. All employees and staff were tested and the numbers began to climb. At its peak, the week of Nov. 9, there were 39 positive cases among staff and residents. By the time the outbreak was declared closed on Dec. 30, the nursing home had a total of 134 positive cases and lost 15 residents to the virus.

In her year-end report, Nursing Home Administrator Laurie Mills described it as a very trying and emotional year.

“My heart breaks for our losses,” she wrote. “I will be forever grateful to our community, for all the businesses and individuals who stepped up and made us feel like heroes, even when we could not see it ourselves. You all kept us going in our darkest days.”

As cases surged in November, both the Berlin city council and Gorham select boards passed mask ordinances and urged residents to “Mask Up”. On Nov. 10, positive cases in the county topped 100.

Throughout the winter outbreaks would occur at both the state and federal prisons in Berlin. On Dec. 23, the N.H. prison announced 75 inmates and five staff had tested positive.

Berlin Mayor Paul Grenier worried the virus would spread to the city’s two nursing homes. His fears came true when Saint Vincent de Paul Nursing Homes suffered an outbreak in early January. The nursing home used antibody therapy to reduce the symptoms and promote a quicker recovery time. In total, 34 residents and 15 staff members would test positive for COVID-19. Two residents would die but all those treated with the antibody would survive.

Currently, the Coos County Nursing Home is in the middle of an outbreak with 10 positive cases among staff and residents.

By late March 2020, an estimated 4,000 vaccinations had been given at the Brown School site. Mobile clinics have administered vaccines on-site to residents of senior housing facilities and Walgreens is also providing vaccines.

As of early this week, the state estimated 18 percent of Granite Staters are fully vaccinated. The state has now opened vaccine registration to all 16 years of age and older.

Still, positive cases are on the rise across the state and the local COVID group said increasing numbers and community spread is seen in growing testing and positive results in the valley as well.

As of Tuesday, Coos County has 53 positive cases with Berlin accounting for 33 of them. Noting the state and region are close to finally turning the corner on the pandemic, the COVID work group is urging residents to continue to follow prevention protocols.

“As spring arrives and vaccine availability increases, we are very close to turning the corner, but we must work together to get there, “ the group states on its latest dashboard.

ANDROSCOGGIN VALLEY — Here are the key dates of the COVID-19 pandemic, as they occurred, from the first case, to the present, and all the emer…