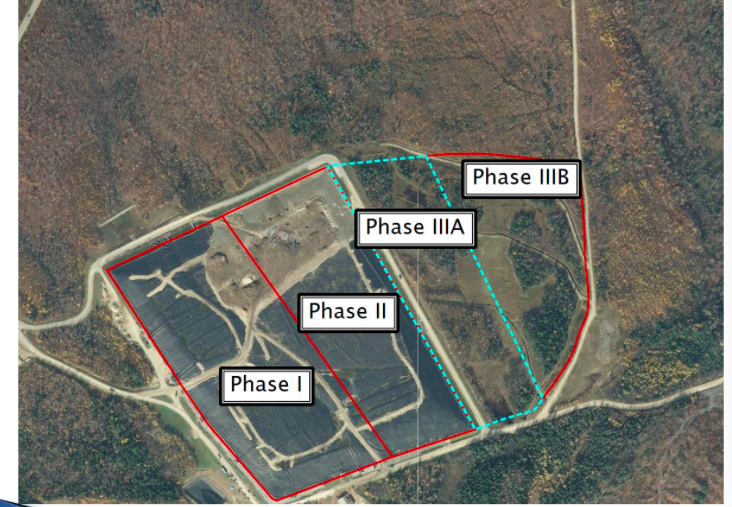 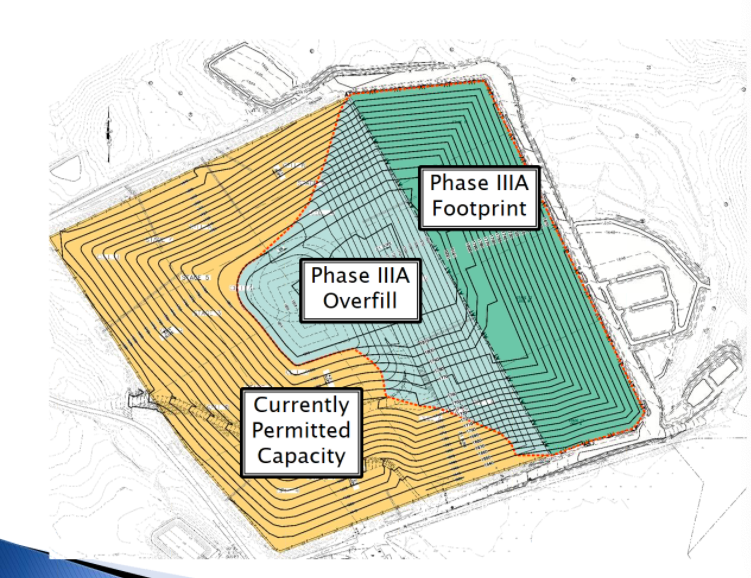 BERLIN — With five or six years of capacity left, the Androscoggin Valley Regional Refuse Disposal District is seeking permission to expand its existing Mt. Carberry landfill. The 24-acre expansion would allow an added 5 million cubic yards of waste or an estimated 16 years of additional capacity.

The NH Department of Environmental Services held a public hearing at Berlin city hall Thursday on the district’s request and is accepting public comments through Jan. 7. The footprint for the expansion was included in the original permit for the landfill but DES requested the district file a permit modification for the expansion because of solid waste regulation changes that have taken place since 1988-89.

DES Permit Engineer Jamie Colby said the solid waste district’s application has been deemed “complete” and is now undergoing technical review which includes soliciting public comments. Once the review is done, she said DES will issue a final decision.

Paul Schmidt of CMA Engineers outlined the proposal on behalf of AVRRDD. He said the publicly owned landfill has a total of 114 acres permitted, of which 67 acres are developed in Phases I and II. Schmidt said the developed section will reach its capacity in 2026-2027. The proposed expansion would be Phase IIIA. Most of that expansion, Schmidt said would be horizonal but the proposal allows for an additional 12 feet above the current stage with a maximum elevation of 1,830 feet. While adding capacity, Schmidt said the district would not increase the amount of waste it takes annually. He said it would continue to accept an average of 305,500 cubic yards of waste annually and there would be no significant change in traffic coming in and out of the landfill.

DES had requested additional information about the AVRRDD’s solid waste goals and the public benefit provided. The application stated the district provides for long-term and cost-effective management of solid waste in an environmentally sound manner for its member communities of Berlin, Gorham, Dummer, Northumberland, Stark, Jefferson, Randolph, Errol, Milan, and Coos County for the unincorporated places

The application notes the landfill expansion meets a state need for landfill space as well as a regional need for the northern part of the state. The Mt. Carberry landfill was originally developed by the Berlin paper mill and the application notes capital and operational infrastructure needed to operate and maintain the facility were significant. As a result, when the mill closed and the district purchased the landfill in 2002, it had to operate it as a commercial landfill for it to be financially viable. While dedicated to the region, the application states the district is forced to take some solid waste beyond the local region in New Hampshire in order to “make ends meet.”

Without the landfill, the district points out the member communities would be forced to send their wastes to the Concord waste to energy plant, Waste Management’s Turnkey landfill in Rochester, and Casella Waste System’s landfill in Bethlehem. Casella is close to capacity in Bethlehem and the other two are in the southern part of the state, increasing transportation costs.

While the state is predicted to face a shortage of landfill space in the next ten to 20 years, AVRRDD has capacity for at least another 30 years. Included are plans for a future Phase IIIB, which would add another 22.8 acres to the landfill and provide at least ten additional years of capacity.

That fact was noted by Adam Finkel of Dalton, the only person who offered comments on the application Thursday night. Dalton sends its municipal solid waste to Carberry and Finkel said he appreciates having the landfill as a resource. He said if the public reduced the amount of waste going into the landfill, the proposed Phase IIIA expansion could provide capacity up into the 2040’s.

Noting some elevated rates, Finkel suggested closer monitoring of ground water. But overall, he said the landfill appeared to be sited in a good location.

A copy of the application is available during review at the Androscoggin Valley Regional Refuse Disposal District at 3 Twelfth St., Berlin or at https://www.des.nh.gov/onestop-navigation.