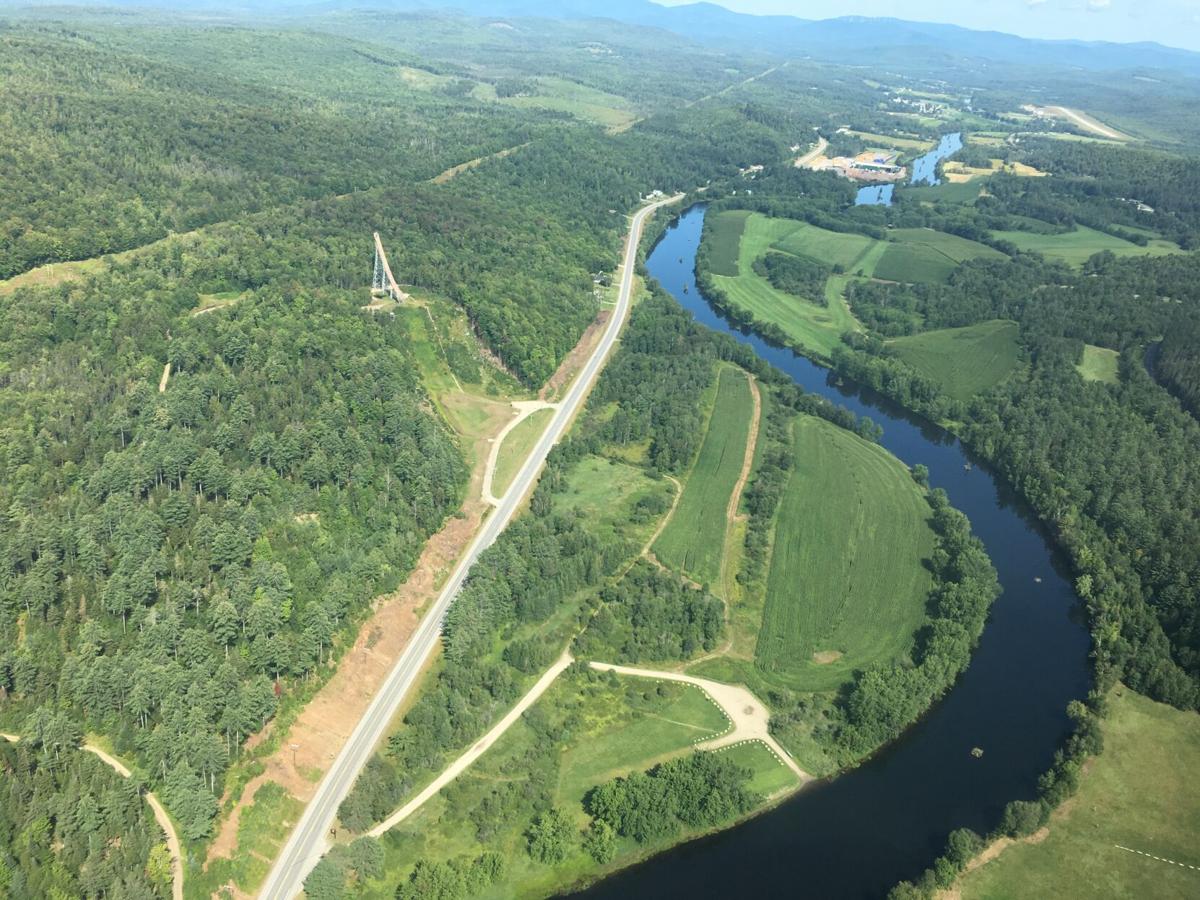 Two parcels of land acquired by the town of Milan for its community forest are near the Nansen Wayside Park. (SALLY MANIKIAN PHOTO) 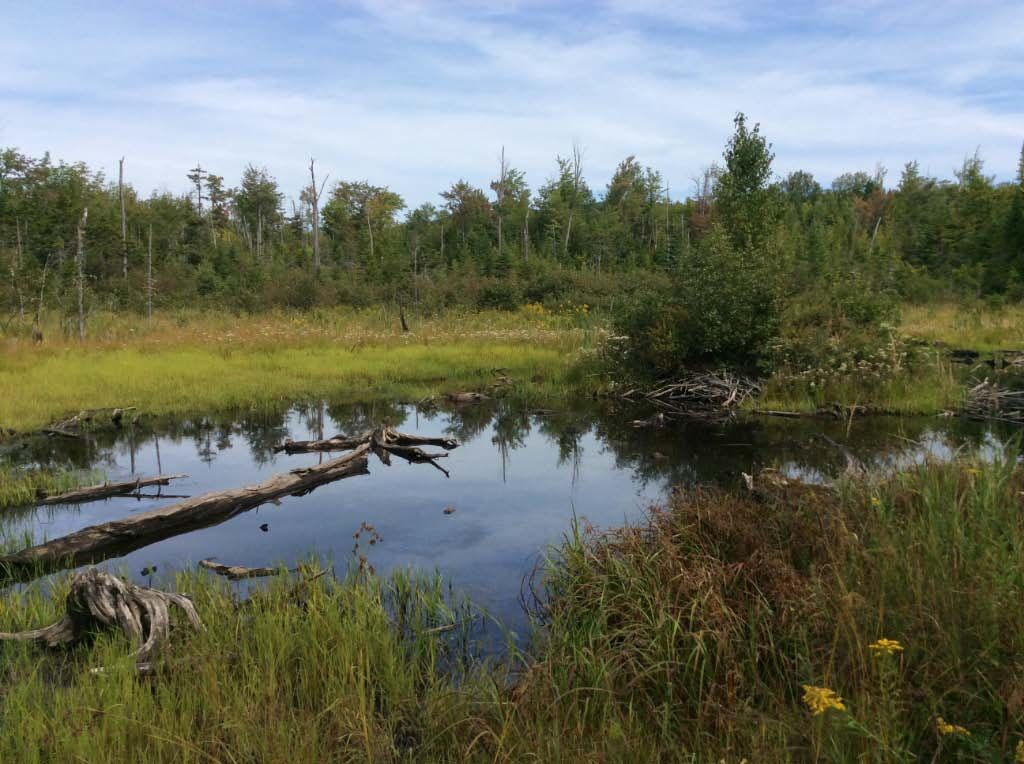 A beaver pond, marsh, and swamp on the just acquired land for the Gorham town forest. (SALLY MANIKIAN PHOTO)

Two parcels of land acquired by the town of Milan for its community forest are near the Nansen Wayside Park. (SALLY MANIKIAN PHOTO)

A beaver pond, marsh, and swamp on the just acquired land for the Gorham town forest. (SALLY MANIKIAN PHOTO)

GORHAM & MILAN — The towns of Gorham and Milan, in partnership with The Conservation Fund, both recently completed efforts to expand their town forests, with their town counsels filing deeds on Friday, July 31, in Lancaster.

Both Androscoggin Valley towns are surrounded by forests known for high-quality wildlife habitats and a variety of recreational opportunities.

Tourism and the timber and wood-and-fiber-related industries have long been key regional economic drivers. Increasing the size of these town-owned community forests is designed to generate income from sustainable timber harvesting and to provide opportunities for new recreational activities.

“Gorham has secured title to 2,020 acres of vitally important land adjacent to our Paul T. Doherty Memorial Forest,” explained Mike Waddell, who chairs the Gorham board of selectmen and the town's Forest Management Committee. “This 2,020-acre acquisition expands the Gorham Town Forest to 5,666 acres, protects in perpetuity our existing landscape, public access and recreational trails, including Corridor 19, and will provide the town economic opportunities with forestry and recreation. We are grateful to The Conservation Fund, whose patience and expertise allowed us to make this acquisition by partnering with state, federal and non-profit organizations.”

Selectmen Judy LeBlanc and Adam White worked with Waddell to move the project forward, most recently voting at their July 27 meeting to authorize the chairman to sign deeds that include conservation restrictions.

In 2014, TCF bought these parcels in both Gorham and Milan from Bayroot, LLC, a timber investment company then managed by Wagner Forest Management of Lyme, to give both towns a chance to consider their options. These local “buys” by TCF were part of its far larger 30,000-acre purchase of forest parcels in four states, negotiated by Nancy Bell, TCF’s then-Vermont-New Hampshrie representative, who has since retired.

Voters at Gorham’s 2019 Town Meeting authorized the selectmen under Article 8 to negotiate buying the 2,005-acre Tinker Brook Parcel to add to the Doherty Memorial Town Forest as well as the sale of some 200 acres for $225,000 to the Town of Randolph, providing a needed cash match. No local tax dollars were spent on the project.

One of the oldest town forests in the state, the Gorham Town Forest — named the Paul T. Doherty Memorial Forest in honor of a well-known Fish and Game conservation officer who lived in Gorham — was established in 1936 to ensure clean drinking water for 90 percent percent of its residents. It also serves as an educational resource for local schoolchildren and offers recreational access to residents and visitors. Revenue from timber management has funded various town projects: the renovation of Town Hall, including the Medallion Opera House, and repairs to the fire station.

The Town of Randolph not only acquired some 205 acres to add to the Randolph Community Forest, but also benefited from the placement of a long-desired conservation easement on that portion of the Doherty Forest that is located within its town boundaries. Randolph’s acquisition was funded by a grant from the Randolph Area Conservation Opportunity Fund, a donor-advised fund established in 2018 at the New Hampshire Charitable Foundation.

“The Town of Milan is pleased with this addition to our Community Forest,” said Milan select board chair Randy Fortin, who works closely with his fellow board members Peter Nolet and Kenneth Lee Dube. “We are very grateful to the agencies and organizations that provided the grants that made this purchase possible.”

Over the past century, Milan came to own scattered forested parcels around town. Inspired by the success of community forests in Gorham, Randolph and Errol, the Milan Community Forest was approved by town meeting action in 2012.

Its 2014 charter established a community-led effort to acquire additional lands to create landscape connectivity and allow the town itself to manage for forestry, wildlife and recreational goals.

The 678 acres that Milan just acquired is made up of two parcels near the Nansen Wayside Park: one directly to the west of Route 16 and the Androscoggin River, and the other directly to the east of East Side River Road and south of Stearns Brook.

These acquisitions advance the town’s efforts to own and manage 5,000 acres and also protects the first River crossing, provides a scenic "Gateway" at the southern end of town, and creates a connected recreational landscape nearby, including trails for skiing, snowshoeing and hiking.

Both towns acquired their new acreage from The Conservation Fund, a national non-profit whose dual mission focuses on providing environmental and economic solutions to communities across the country.

During the years in which TCF owned these lands, it was managed through its Working Forest Fund program, dedicated to mitigating climate change, strengthening rural economies and protecting natural ecosystems through the permanent conservation of at-risk working forests.

“The Gorham and Milan Community Forests, anchoring the historical timeline as one of the oldest and one of the newest community forests, are extraordinary examples of the unique forms these truly local ownerships can take,” explained Sally Manikian of Shelburne, TCF’s Vermont-New Hampshire representative, who four years ago joined the non-profit national conservation organization.

“Both of them share the common vision of public access, timber management and educational opportunity, but have unique values that define them: Gorham with its emphasis on drinking water; and Milan with its bold goal of ecological connectivity and forest ownership at scale," she said. "As a Coos resident, who lives within 10 miles of both projects, it’s meaningful to work with my neighbors and friends to achieve their visions for their communities and landscapes.”

It was TCF’s purchase of these forested parcels in 2014 that gave Gorham and Milan the time they needed to secure funding that allowed them to add the parcels to their community forests.

The USDA-CFP program is funded every year by the U.S. Congress with support from N.H.’s Congressional delegation.

“I join our leaders in Gorham and Milan in celebrating this news, which is a ‘win’ for the North Country’s regional economy and New Hampshire’s longstanding commitment to conservation efforts,” said U.S. Sen. Jeanne Shaheen. “This land purchase will help ensure the protection of our forests while also allowing for sustainable timber harvests and investments in our state’s outdoor recreation economy, which is significant for the North Country’s workforce.”

“I am pleased that the towns of Gorham and Milan have partnered with The Conservation Fund to add nearly 2,700 acres of forested land to the Gorham Town Forest and the Milan Community Forest,” U.S. Sen. Maggie Hassan said.

“Local conservation efforts are central to environmental protection in New Hampshire,” said Congresswoman Annie Kuster. “The expansion of the Gorham and Milan Community Forests was a true team effort.”

“The Open Space Institute congratulates Milan and Gorham for stepping forward to conserve lands so vital to their communities, for drinking water, wildlife, wood products and way of life,” said Jennifer Melville, vice president for conservation grants at OSI, which granted $130,000 toward the two projects through its Community Forest Fund.

The Conservation Fund’s mission is to create “solutions that make environmental and economic sense by redefining conservation to demonstrate its essential role in our future prosperity.”

TCF has worked in all 50 states since 1985 to protect more than 8 million acres of land, including nearly 55,000 acres in the Granite State.