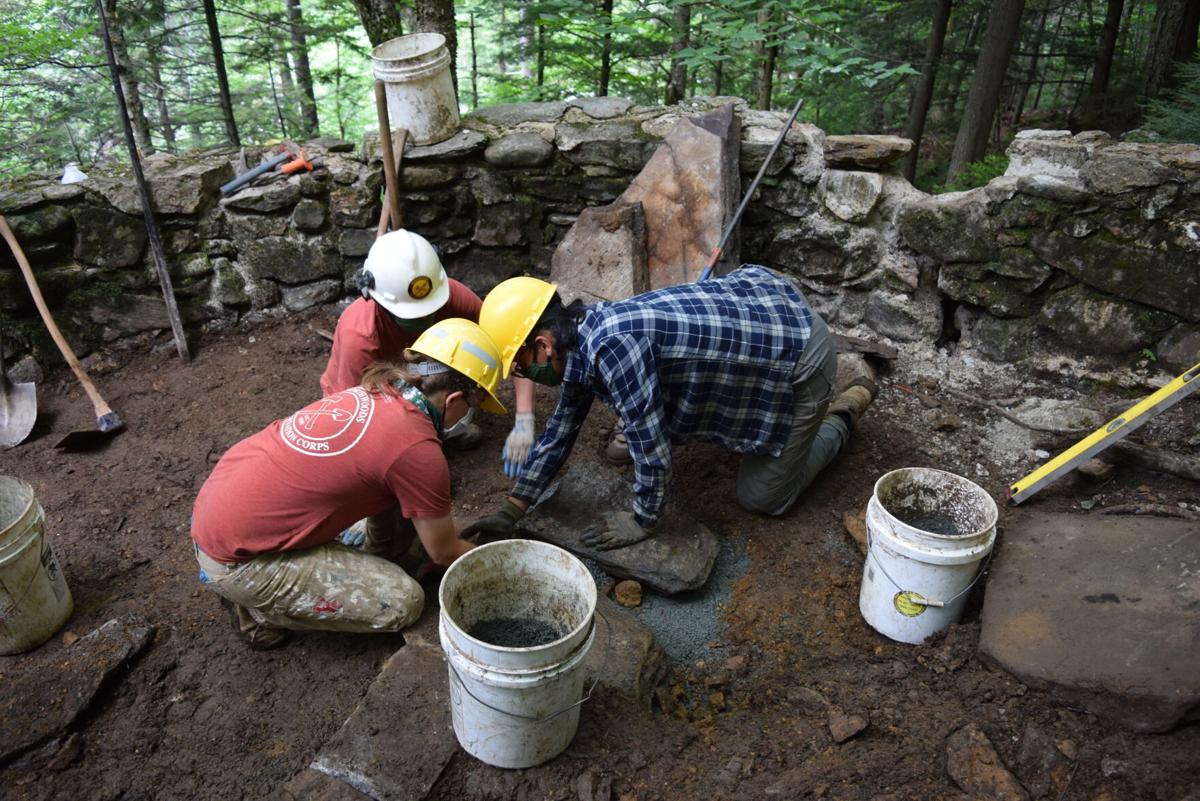 After severe drainage problems were remedied on the only switchback on the WMNF Glen Ellis Trail in Pinkham’s Notch, 3 “Pro-crew” members from the VT-based NorthWoods Stewardship Center used staymat to hold schist rocks in place as part of a 10-week repair and improvement project. (Edith Tucker photo) 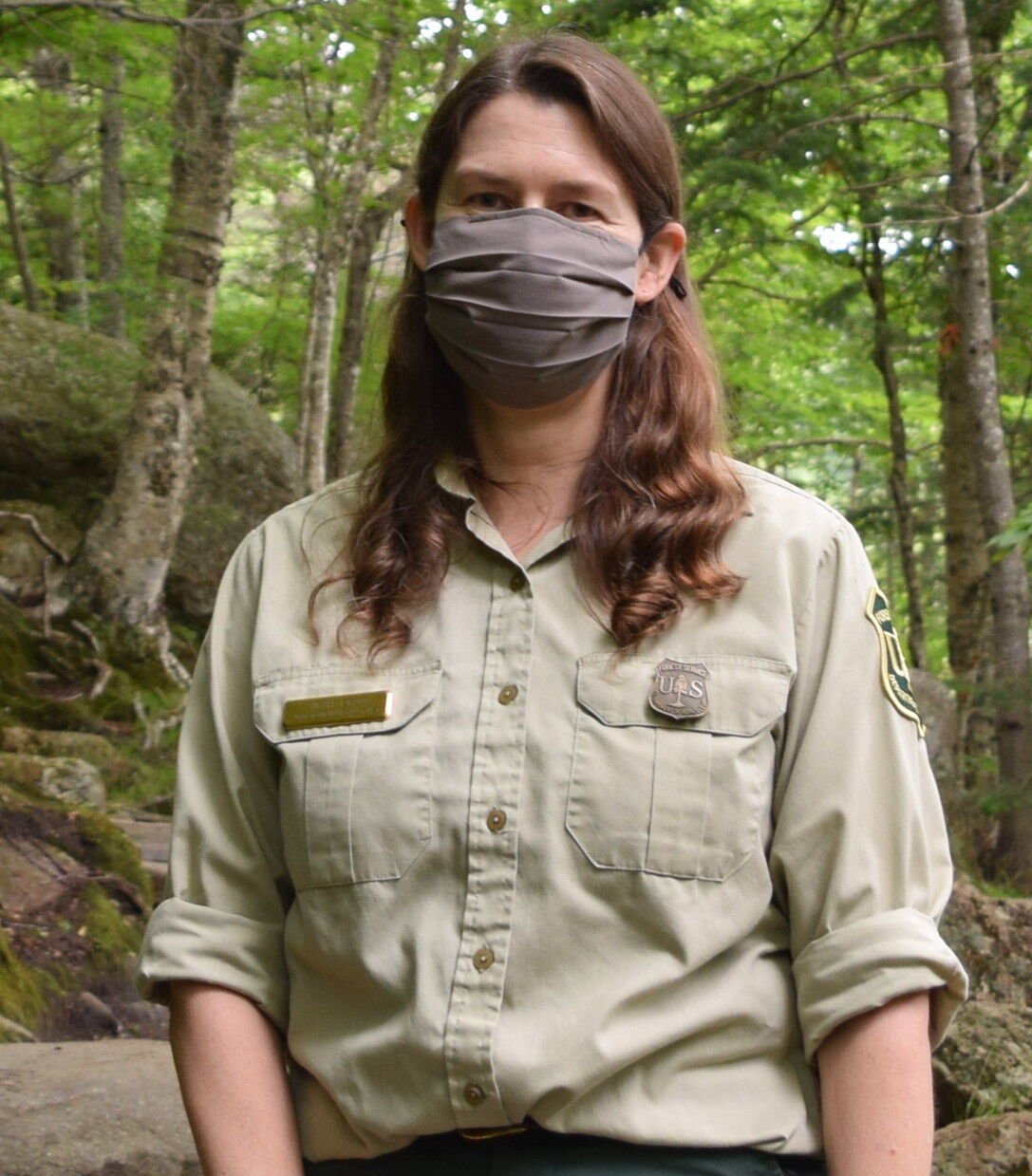 WMNF Archaeologist and Heritage Program Manager Sarah Jordan, who served on the scoping team that planned the work now underway to repair and improve the Glen Ellis Day Use Area, was pleased to see the laborious work begin.

After severe drainage problems were remedied on the only switchback on the WMNF Glen Ellis Trail in Pinkham’s Notch, 3 “Pro-crew” members from the VT-based NorthWoods Stewardship Center used staymat to hold schist rocks in place as part of a 10-week repair and improvement project. (Edith Tucker photo)

WMNF Archaeologist and Heritage Program Manager Sarah Jordan, who served on the scoping team that planned the work now underway to repair and improve the Glen Ellis Day Use Area, was pleased to see the laborious work begin.

Because it was built in 1938-39 under the federal Civilian Conservation Corps public works program, the Glen Ellis Day Use Area qualifies for listing on the National Register of Historic Places. Both the State Historic Preservation Officer and the U.S. Forest Service have pledged to ensure that the work at Glen Ellis be undertaken with a keen appreciation of the area’s outstanding natural beauty, cultural and heritage importance and unique recreational opportunities.

“The historic CCC stonework and woodwork materials and styles of construction will be preserved, as guided by WMNF heritage specialists in consultation with the N. H. State Historic Preservation Office,” states the May 2015 record of decision on the scoping document issued earlier that year.

To back up that pledge, the USFS and the nonprofit White Mountain Trail Collective sought the services of the nonprofit HistoriCorps for help.

The largest number of the dozen or do workers on site on Thursday, July 16, were concentrated at the Trail’s only switchback, not far from the base of the Falls.

“We think we’ve solved the drainage issues at the switchback,” said HistoriCorps volunteer John Burnell, who operates a restoration masonry company in Kent, Ohio. “It actually was helpful that it rained very hard this week, so we could analyze these problem areas,” he said. “The switchback had the Trail’s worst problems, so we decided to focus our attention there first to make sure they’re addressed this summer.” Burnell pointed out that the CCC construction crew had built the rustic-looking Trail using native stone — rock schist on steps and flat platforms and granite on the side-walls — held in place by mortar and metal reinforcing rods, that were concealed as much as possible. “As a longtime mason who specializes in conservation and diagnostic services, I was able to learn how the original CCC crews built the features here by carefully watching the workers who took them apart to renovate them,” Burnell explained.

The entire Day Use Area, which typically attracts some 500 tourists a week during the summer, was closed to the public on Monday, July 13.

By Thursday, a lot of schist rock steps had been pried up, and both broken and undersized drainpipes excavated. Workers, including USFS trail crew members, dug up red clay pipes, some of which could be reused, as well as a number of collapsed black Bermico pipes, a locally invented and patented product made from wood fiber at the Brown Company of Berlin. New white PVC pipe is now being buried that will divert the many little streams of water off the hillside so that it all flows under the switchback. Much of the stairs and flat areas are being repaired with the original schist rock but news slabs have also been ordered from a vendor on Tamworth. The schist rocks are being held firmly in place with a small-stone formulation — staymat — that was not in use in the 1930s. A truckload of staymat (not a brand) was dumped in the Glen Ellis parking lot, and trail crew members carried buckets of down to where the schist was being laid.

“The Trail’s design called for the incorporation of natural features, and stones used in walls were to have natural, uncut surfaces with no attempt to lay them in regular courses,” reads a trail history provided by Sarah Jordan, WMNF Archaeologist and Heritage Program Manager. Jordan was part of the USFS team who worked on the 2015 planning-scoping document and was delighted to see this long-needed project become a reality. “The heaviest possible stone was used in construction of the stairs and Trail so that the stability obtained through greater weight would minimize the use of concrete for anchorage…. Trail design, construction materials and workmanship lend to the feeling of a rugged outdoor forest feature clearly fitting with the natural surroundings.”

Members of the nonprofit NorthWoods Stewardship Center of East Charleston, VT expect to work straight through to mid-Sept. Because of the complexity of the masonry and drainage work to be done, NorthWoods assigned its 4-member “Pro-crew” to the project, made up of experienced trail workers in their 20s, plus supervisor Kelsey Morganwalt of Gorham.

The HistoriCorps volunteers are staying at an Airbnb in Jackson, and the Pro-Crew is camping in the just-renovated Dolly Copp Campground.

Trail Collective assistant project manager Ally Scholtz, who is coordinating the project is on site every day, working wherever extra hands are needed. It was CCC Company 155 from Camp Peabody — recently renamed AMC Camp Dodge — that constructed the Glen Ellis Falls Trail and other amenities under Forest Service supervision during the Great Depression.

The WMNF had a total of 18 CCC camps within its boundaries, and their enrollees — all males — built a range of rustic-appearing infrastructure projects.

Part of the CCC’s scope of work in 1938-1939 included making the pedestrian underpass that had been constructed in the 1920s when Route 16 was realigned look compatible with the rustic rockwork. When the underpass was installed it led to both wooden boardwalks and staircases.

Although modifications were made to the underpass, parking area, and sanitation facilities in both the 1960s and 1980s, the CCC’s stone and masonry work remained largely intact for 82 years.

“Funding is coming to the White Mountain Trail Collective as a project grant from the nonprofit National Forest Foundation, headquartered in Missoula, MT, and is a combination of donor funds and USFS cost-share funds,” explained WMNF public affairs specialist Colleen Mainville in an email. “The total budget is $150,000.”