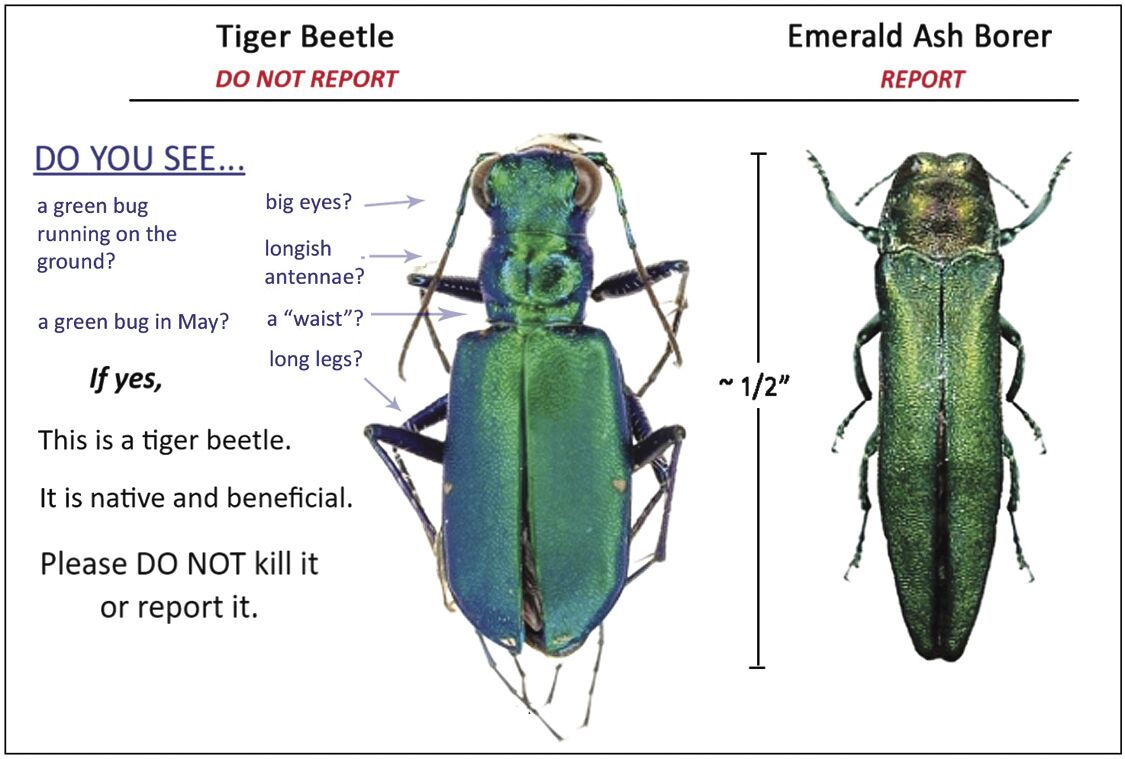 The State of Maine asks people to report sightings of Emerald Ash Borers but not Tiger Beetles. To make a report go to tinyurl.com/hh59xh9a. (COURTESY IMAGE) 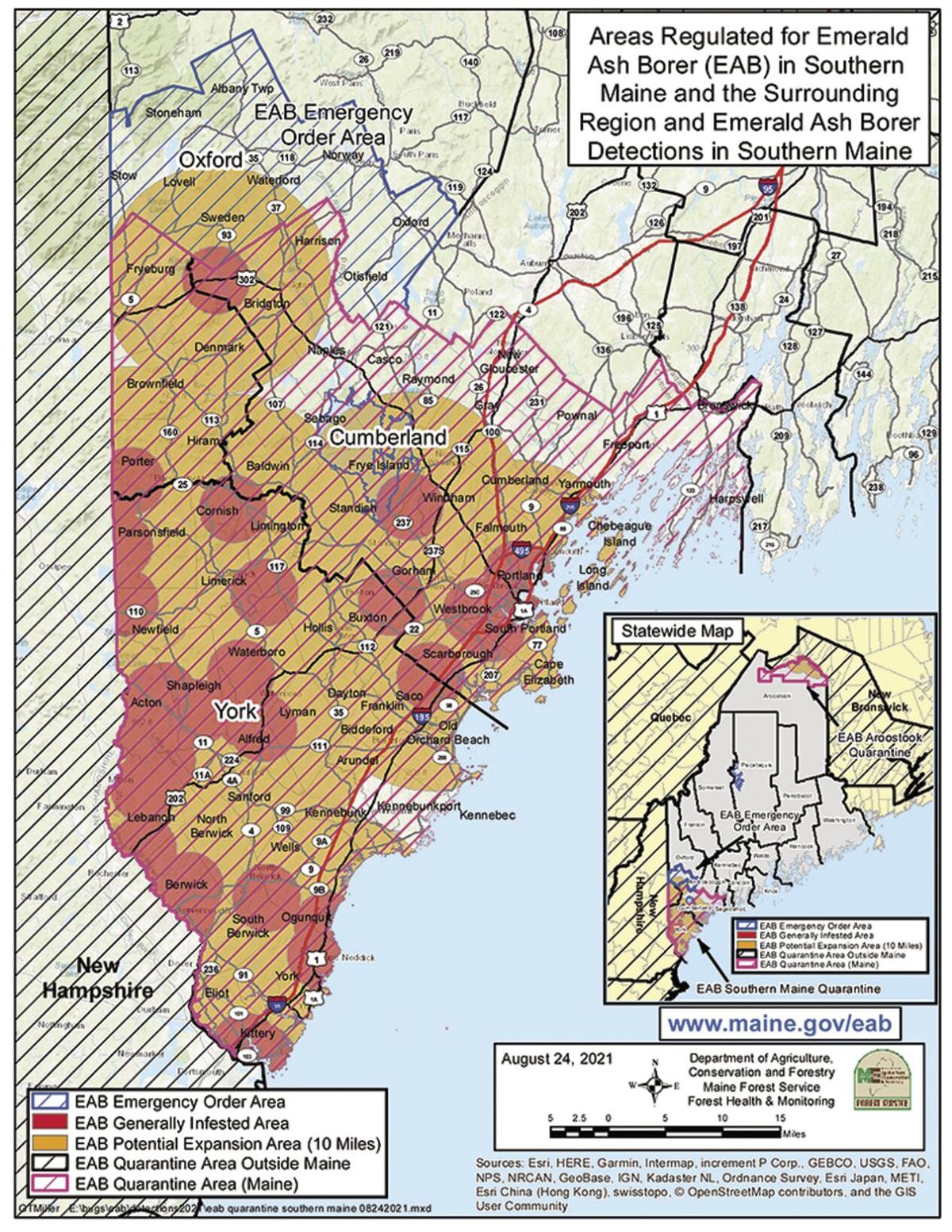 This state map issued Aug. 24 shows that several southern Oxford County towns are under an emergency order due to the Emerald Ash Borer, an invasive insect. (MAINE.GOV IMAGE) 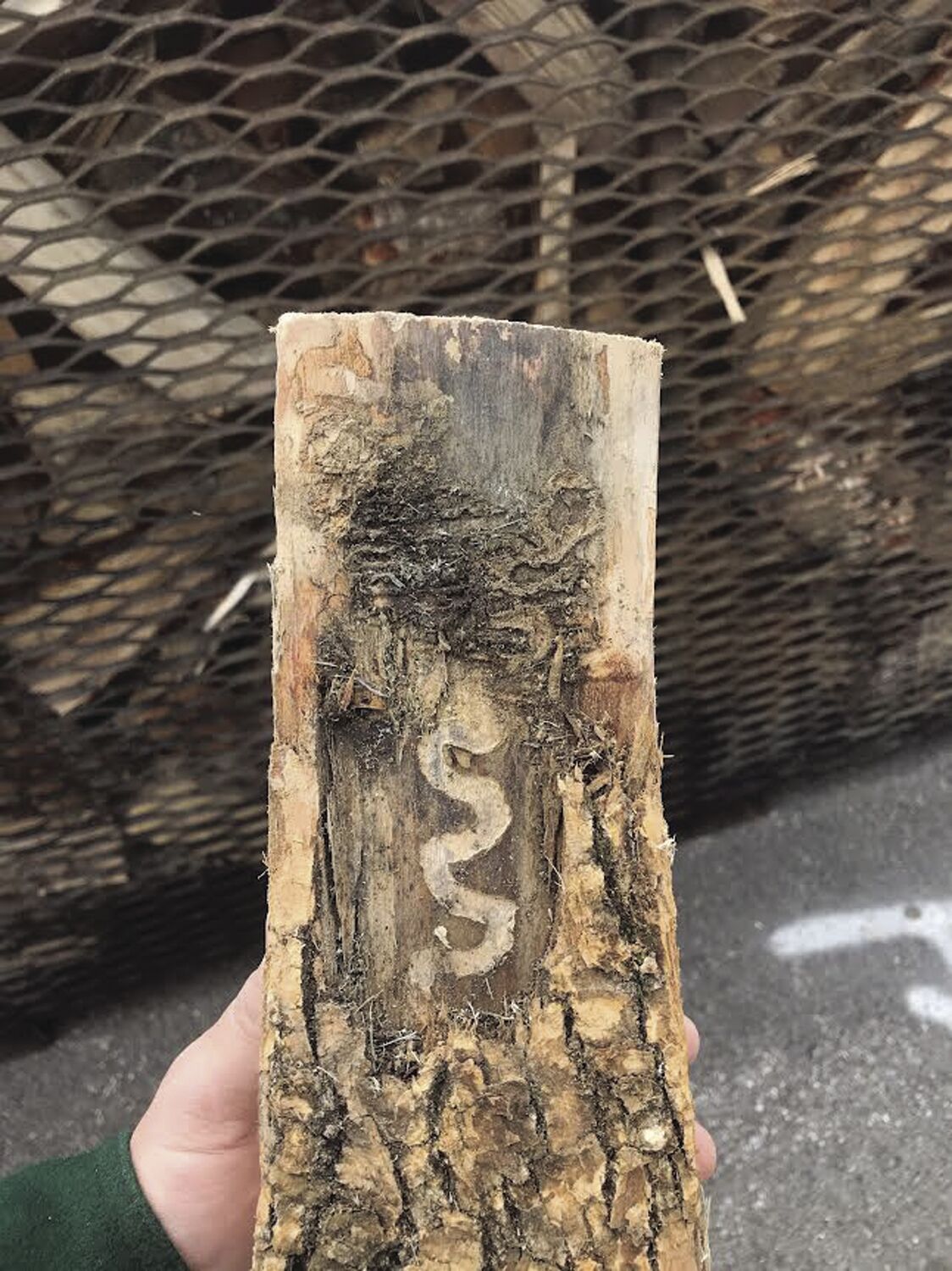 A piece of firewood that is invested with the Emerald Ash Borer. The S shape pattern is a tell tale sign. (MAINE FOREST SERVICE PHOTO)

The State of Maine asks people to report sightings of Emerald Ash Borers but not Tiger Beetles. To make a report go to tinyurl.com/hh59xh9a. (COURTESY IMAGE)

This state map issued Aug. 24 shows that several southern Oxford County towns are under an emergency order due to the Emerald Ash Borer, an invasive insect. (MAINE.GOV IMAGE)

A piece of firewood that is invested with the Emerald Ash Borer. The S shape pattern is a tell tale sign. (MAINE FOREST SERVICE PHOTO)

AUGUSTA, Maine — The state of Maine recently issued an emergency order on wood products from several Oxford County towns to prevent the spread of an invasive insect called the emerald ash borer.

Originally from Asia, the emerald ash borer, is a metallic green colored beetle about a half-inch long. The insect larva kill the trees by feeding under the bark.

“Since its discovery in the United States in 2002, emerald ash borer has killed millions of ash trees,” according to the website maine.gov.

The insect threatens ash tree species (except for the mountain ash) “and will have significant ecological and economic impacts on the state,” according to the website.

At the end of last month, the Maine Department of Agriculture, Conservation and Forestry’s Maine Forest Service issued an order limiting the movement of ash trees for planting and ash tree products such as logs, pulpwood, green lumber and hardwood firewood from the order area.

“This order area is in addition to areas described in the existing state quarantine,” maine.gov reported.

Maine Forest Service entomologist Mike Parisio told the Sun on Tuesday: “The thing to stress right now and into the future is that people should move firewood as short a distance as possible from where it was harvested while paying attention to state regulations.”

He added that New Hampshire has similar rules prohibiting imported firewood. “The only firewood that should be moving across the border into Maine is certified heat-treated firewood, which means it’s been heated to a core temperature of 160 degrees F. for no less than 75 minutes.”

“This is an essential requirement to kill pests of all kinds in firewood, and it’s important that people know this is different from ‘seasoned’ or ‘kiln-dried’ firewood,” Parisio said. “Although ash and emerald ash borer are at the forefront of concerns for the order, there are other well-known and lesser-known forest pests of concern that move in firewood, and so it’s not just ash we all need to worry about,” he added.

He said most firewood is unlabeled in terms of wood species and it’s possible that ash could end up in a batch of hardwood firewood that isn’t supposed to have ash in it. For this reason, “our emerald ash borer regulations include all hardwood firewood and not just ash firewood,” he said.

The emergency order instituted Aug. 30 will be in place for 180 days but could be renewed.

“In this particular instance, we are coming up on the end of our emerald ash borer monitoring season here in Maine, traps will start coming down soon, and trap trees will be processed from mid-September through October,” said Parisio.

“By November, we should have all the related data compiled and can look at amending the state quarantine.”

A Maine.gov map shows other Oxford Maine towns such as Fryeburg, Denmark and Brownfield are under an existing quarantine as there is an infestation on the eastern end of Fryeburg, northern Denmark, southern Sweden and northwestern Bridgton.

Oxford County as a whole runs from Porter and Hiram in the south to North Oxford, which reaches the Canadian border.

To report an emerald ash borer sighting in Maine, go to tinyurl.com/hh59xh9a.