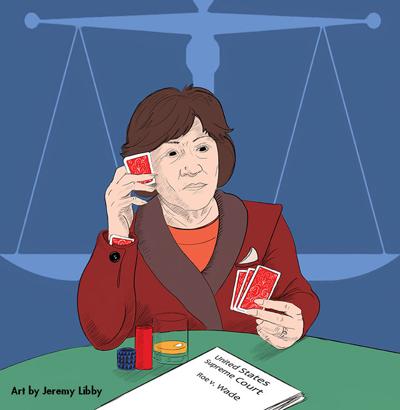 The most convincing claim that Susan Collins has had to her career-long status as a political moderate is her commitment to reproductive rights.

It’s grimly ironic, then, that a single looming vote has the potential to recast the Maine senator in national memory as one of the biggest anti-abortion villains in 40 years.

Monday night at 9 pm EST, in a spectacle better suited for a sports draft or Oscar Award announcement, President Trump made a show of naming Brett Kavanaugh, a staunchly conservative judge and former George W. Bush aide, as his nomination for the Supreme Court Justice seat vacated by Anthony Ken- nedy.

As the entire country has since noted, that move positions Susan Collins as a potential deciding vote in a decision to confirm Kavanaugh, which Senate Majority Leader Mitch McConnell has pledged will occur before November’s midterm elections.

If everyone votes according to party lines in a Senate controlled by 51 Republicans, Susan Collins' career-long willingness to break ranks with her party in favor of abortion rights will be given the ultimate challenge. (GOP Senator John McCain has been ill for much of the Congressional session, and could potentially sit out the vote.) Indeed, in the history of reproductive rights since Roe, a timeline that spans 45 years, it's possible that Collins' vote to confirm Kavanaugh will become the single most significant, high-leverage decision on the issue of abortion. A Kaiser Health News report Tuesday estimated that in a Supreme Court reversal of Roe v. Wade, up to 22 states could face an immediate abortion ban.

WHAT'LL IT BE, SENATOR?

For the record, here's Susan Collins' official statement on nominee Brett Kavanaugh, sent to the Phoenix by email Tuesday:

“Judge Kavanaugh has impressive credentials and extensive experience, having served more than a decade on the D.C. Circuit Court of Appeals," Collins wrote.

“I will conduct a careful, thorough vetting of the President’s nominee to the Supreme Court, as I have done with the five previous Supreme Court Justices whom I have considered. I look forward to Judge Kavanaugh’s public hearing before the Senate Judiciary Committee and to questioning him in a meeting in my office.” (Aides in Collins' office were not able to confirm whether an office meeting with Brett Kavanaugh was scheduled.)

So, uh (*squints*), there's obviously not much to extract there. But there it is. She's gonna meet with this guy.

There is, however, a flood of analysis and expert opinion on the issue. But we can't say it looks good.

Like the statement above, everything about the language Collins has used to discuss the issue to this point has been vague, nuanced, or multivalent, leaving analysts to think that a vote to confirm Kavanaugh is in the cards.

Last week, Collins told the Portland Press Herald that she will not use support for Roe v. Wade as a litmus test in determining whether to vote for a nominee. Then she said that a candidate who openly “demonstrated hostility” to Roe would be a non-starter for her, because it would demonstrate an "activist agenda" that she disapproves of in a Supreme Court Justice.

"A nominee's personal views on Roe v. Wade are not relevant to my decision," Collins told NewsCenter Maine last week. "What is relevant is whether they're committed to longstanding precedent."

As the Press Herald's Colin Woodard writes, "this approach in no way protects Roe, both because Supreme Court justices overturn precedents all the time — including in a landmark case regarding public sector unions at the end of last month — and because the real danger to abortion rights isn’t an outright repeal but rather a narrowing of how the right is defined to the point where access is difficult or impossible for many women."

Beyond the soundbites, experts point to Collins' disappointing votes on such crucial confirmations as Justice Neil Gorsuch, and the shockingly-still-employed Secretary of Education Betsy DeVos (for whom she did not vote to confirm in the Senate vote in a 51-50 vote that was ultimately decided by Vice President Mike Pence, but did vote to advance the nomination in a more decisive 12-11 vote in the Senate Committee.)

"She voted for Justice Gorsuch and he was clearly a conservative," writes Ed Goldman, an attorney and professor in the University of Michigan Department of Obstetrics and Gynecology, where he manages the program on sexual rights and reproductive justice in an email to the Phoenix, "which means she is also very likely to vote to confirm Judge Kavanaugh."

"While she may be interested in reproductive rights and have a strong NARAL rating (83 percent) and voting record, she is not likely to break ranks on the confirmation vote," added Goldman in an email to the Phoenix, who said that while he is a reproductive rights lawyer and scholar, he is not an expert on Collins.

Susan Collins was a more reliable vote for the GOP in 2017 than any other year | Analysis by CNN's Harry Enten https://t.co/As0mon8efA pic.twitter.com/bCkQLYP4fe

IS THERE ANY HOPE?

Sure. Some have hope. While many in the national media have all but resigned to the senator rubber-stamping Kavanaugh, pro-choice advocates in Maine who have worked with Collins on upholding reproductive rights are trying to remain optimistic.

"I think we understand that Senator Collins has a deep commitment to ensuring that women have access to reproductive health care and abortion," said Nicole Clegg, Vice President of Public Policy with Planned Parenthood of Northern New England, on the phone to the Phoenix. "We trust that she's going to approach this process with those women in mind."

Possibly the most compelling argument progressives have to blocking Kavanaugh may be that a sitting president under federal investigation should not be able to make Supreme Court appointments. If Collins were to somehow break precedent with her previous confirmation votes, such as Neil Gorsuch (confirmed in April 2017, before the official federal investigation was opened), this is a line of reasoning she could potentially take.

Other Maine-based organizations working in women's health and reproductive rights joined in urging the Senator in rejecting Kavanaugh.

"Kavanaugh’s record indicates he would roll back women’s rights, LGBTQ+ rights, voting rights, and workers’ rights while favoring corporate interests and right-wing extremists," stated a press release from Maine Family Planning, who urged both Senator Susan Collins and Angus King to oppose Kavanaugh's nomination. "We also call on Sen. Collins to use her role on the Judiciary Committee to ensure that Kavanaugh’s position on Roe v. Wade is thoroughly investigated throughout the confirmation process."

Of course, Collins has broken rank with Republicans before. She voted against a Obamacare repeal last year (though effectively reversed it by voting for Trump's upward-redistributive tax bill a few months later, the Tax Cuts and Jobs Act, which had the effect of gutting Obamacare funding.) Her official voting record on abortion rights is ranked favorably due to her support for pro-choice platforms on smaller, common sense bills (like her dissent on an absurd one that would have defined an unborn child as eligible for CHIP funding). But there's been nothing as high-stakes as this.

WAS IT ALWAYS GOING TO BE KAVANAUGH?

"When we examine nominee Kavanaugh's record," added Clegg, "we are concerned, and don't believe that he should be approved to serve a lifetime appointment on the Supreme Court."

There is little doubt that if Kavanaugh is to be confirmed, abortion rights are imperiled, specifically with the overruling of landmark case Roe v. Wade. Kavanaugh, a 53-year-old Yale graduate currently sitting on the U.S. Court of Appeals for the District of Columbia Circuit, is widely assumed to be hostile to the decision.

"Just last year," wrote Maine Family Planning. "Kavanaugh voted to block Jane Doe, an undocumented teen in federal custody, from getting an abortion. He has supported allowing employers to deny their employees access to no-copay birth control coverage. And Kavanaugh, like all the nominees on Donald Trump’s short-list, was vetted and approved by extreme anti-abortion conservative groups whose mission is to overturn Roe v. Wade."

Furthermore, the five names Trump added to his list of Federalist Approved judges last November was to get Kavanaugh on that list. The other four names were considered cover, per source. In other words: the decision has been baked for a while:W/ @frankthorp

That "extreme anti-abortion conservative group" is the Federalist Society, who provided Trump with a list of "acceptable judges" last year. According to a report Tuesday by Leigh Ann Caldwell, Kavanaugh was added to that shortlist last November, along with the names of four other judges "for cover." This suggests, and Caldwell also reports, that the intention to replace Kennedy with Kavanaugh had been building for awhile.

As far as the Phoenix is aware, Kavanaugh has not recorded any official statements stating he would vote to overturn Roe v. Wade. While that may seem reassuring on its face, it's no less alarming. The fact that there are no recorded opinions means that Kavanaugh could fit Senator Collins' criterion that a nominee not carry an "activist agenda" on Roe.

[Update: On Wednesday, the Daily Beast reported that Kavanaugh gave a speech to the American Enterprise Institute in 2017 in which he disparaged the Roe decision, calling it a “freewheeling judicial creation of unenumerated rights that were not rooted in the nation’s history and tradition.”]

THE COUNTRY DOESN'T WANT THIS

Abortion rights, we should remember, are something that a solid majority of the country agrees upon. A 2017 Quinnipiac poll found that 70 percent of the country do not wish to see Roe v. Wade overturned.

"Brett Kavanaugh, contrary to 200 years of Supreme Court precedent, believes a president 'may decline to enforce a statute . . . when the president deems the statute unconstitutional.' He ruled against a migrant teenager seeking to be released from custody in order to obtain an abortion. He believes a president can only be indicted after he leaves office and should not be subjected to civil suits while in office. He ruled the Consumer Financial Protection Bureau was unconstitutional. And he would not uphold the Affordable Care Act’s contraception mandate."

For what it's worth, Susan Collins didn't attend Trump's announcement of judge Kavanaugh Monday night. Along with Lisa Murkowski, a fellow GOP Senator with pro-choice leanings, she did not appear alongside the majority of her party. All that means is that she's not telegraphing her decision to approve Trump's agenda, but for progressives looking for a glimmer of hope, it's something.

Collins has been a Maine Senator for 22 years, buoyed in large part by her support from women and women's rights groups. Given the magnitude of this vote, those same people and their supporters are sure to remember her forthcoming decision on Kavanaugh, not just for her re-election bid in 2020, but for her legacy in office.

[Edit: This article has been corrected. An early version stated that Susan Collins voted to confirm Scott Pruitt as EPA Administrator — she did not. Senator Collins voted against Pruitt in a 52-46 decision. It also clarified language about her vote for Betsy DeVos.]