You are the owner of this article.
Edit Article Add New Article
Home
News
Calendar
Sports
Opinion
Community
Things To Do
Classifieds
Share This
1 of 10

The nine-episode "Star Wars" series that began with 1977's "Star Wars" — now dubbed the "Skywalker Saga" — concludes with "The Rise of Skywalker." (COURTESY OF LUCASFILMS) 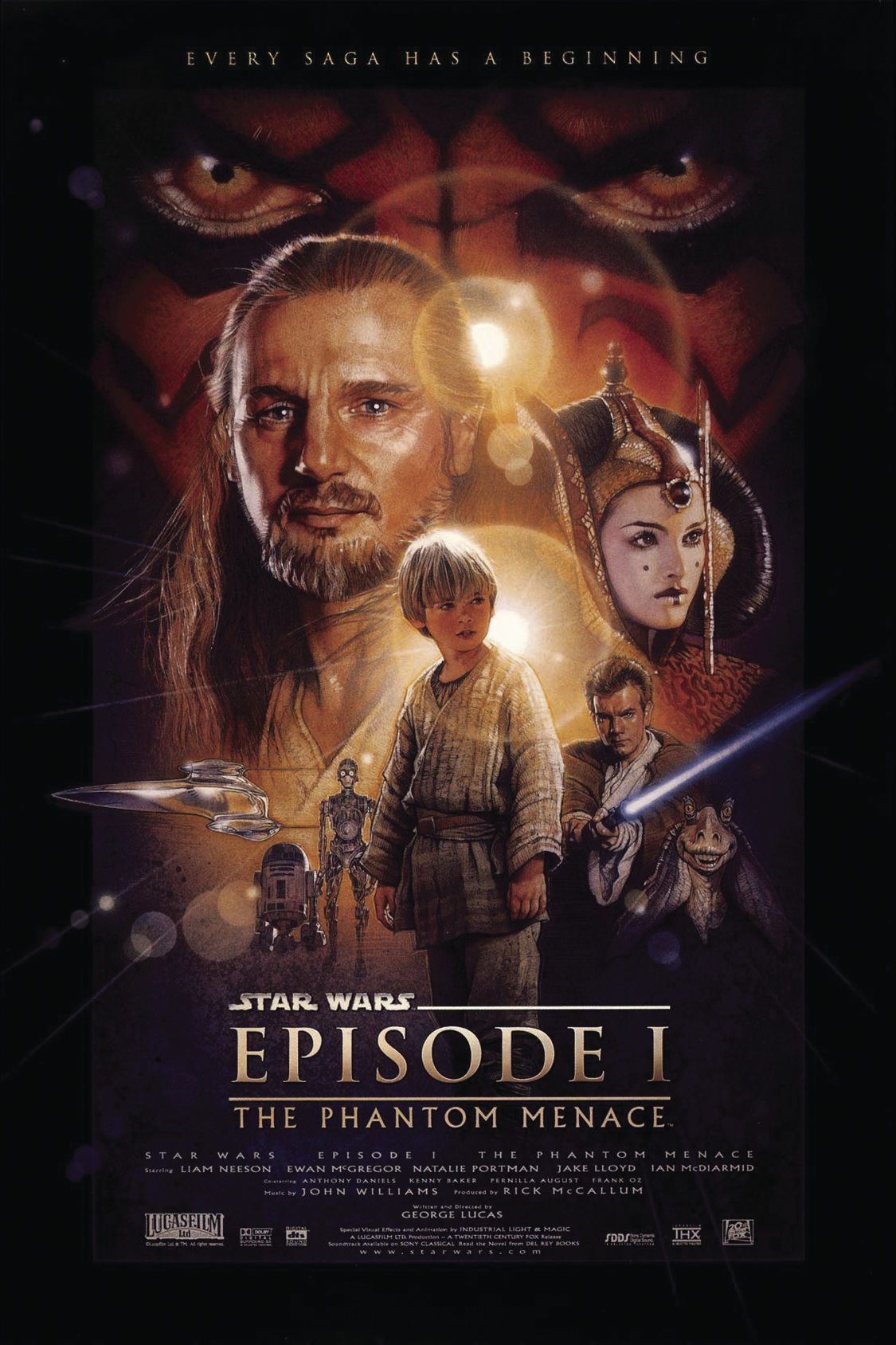 The "Star Wars" franchise returned with after a 16 year gap with "The Phantom Menace." (COURTESY OF LUCASFILMS) 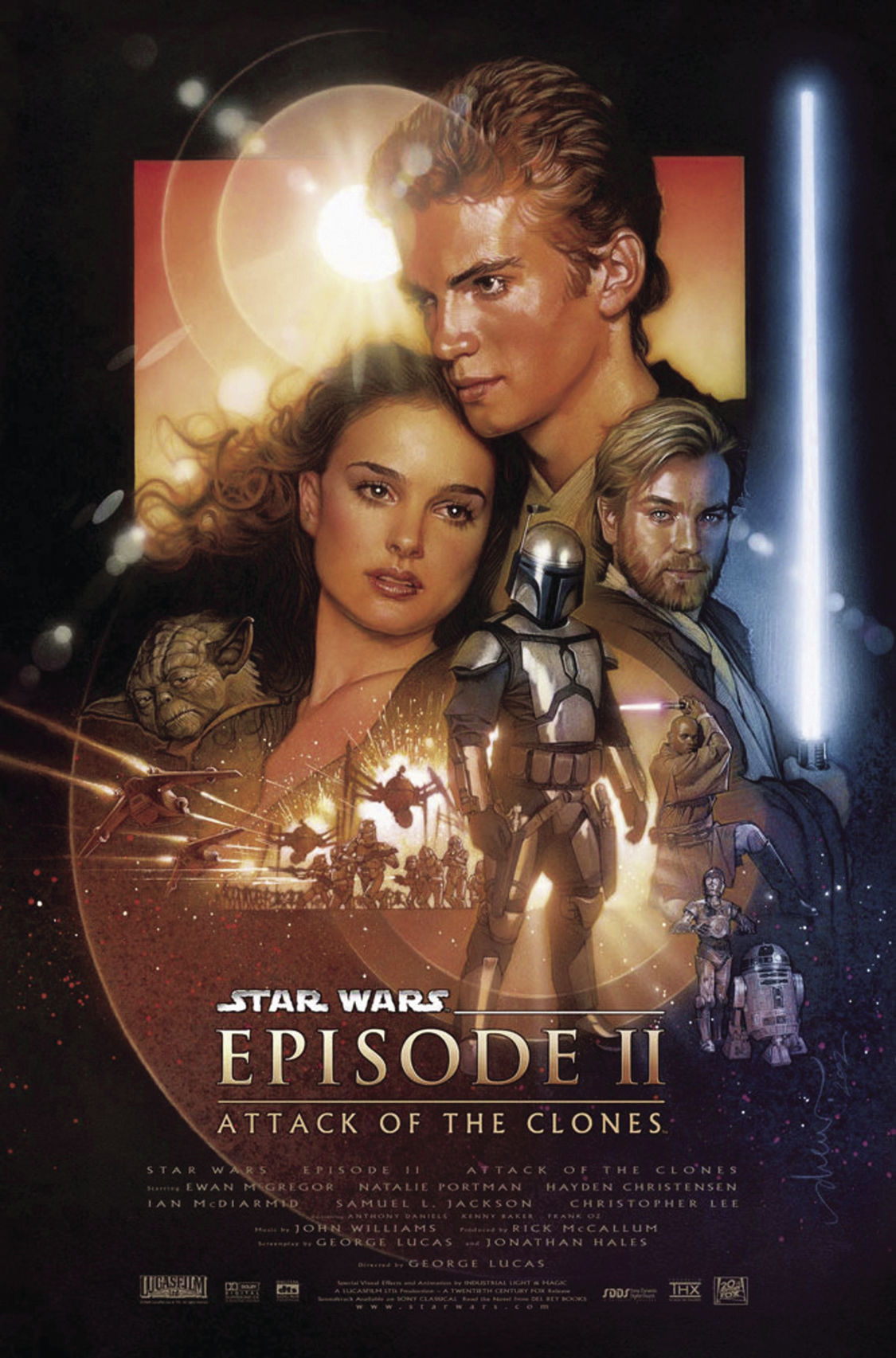 "Attack of the Clones" clumsily continued the prequel trilogy. (COURTESY OF LUCASFILMS) 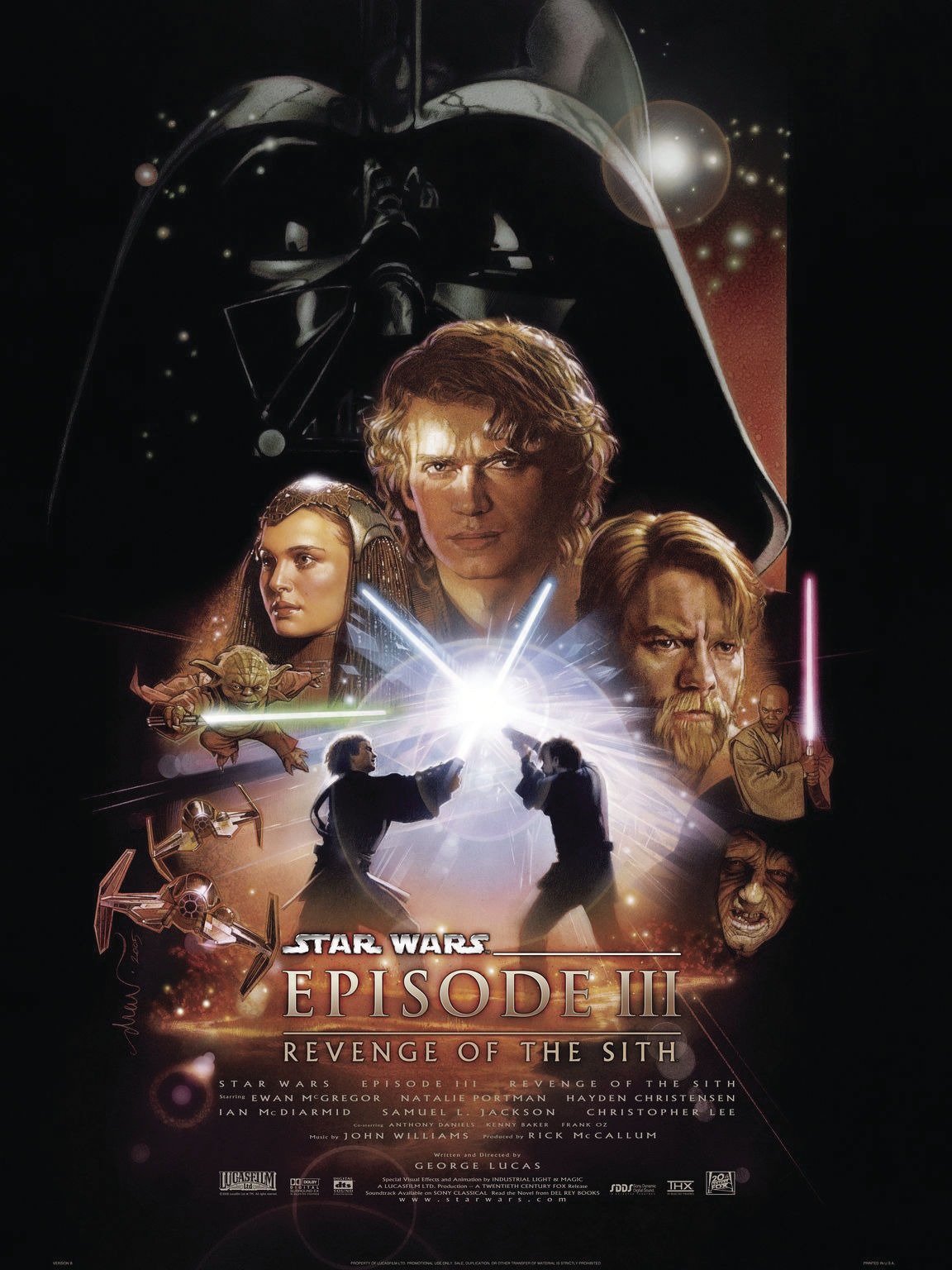 "Revenge of the Sith" concluded the the prequel trilogy. (COURTESY OF 20TH LUCASFILMS) 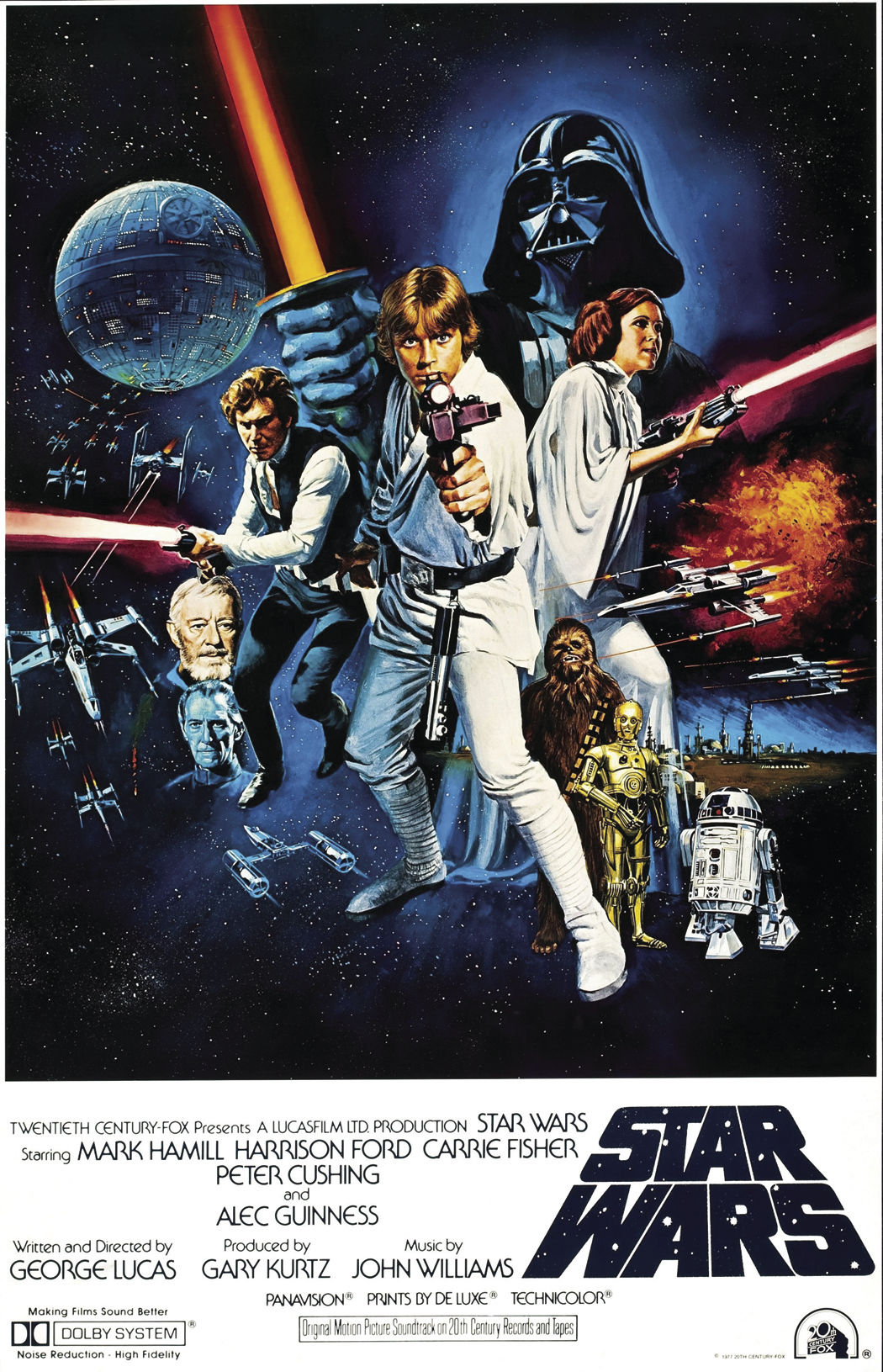 The original "Star Wars" was released in 1977 and its popularity changed the movie industry moving forward. (COURTESY OF LUCASFILMS) 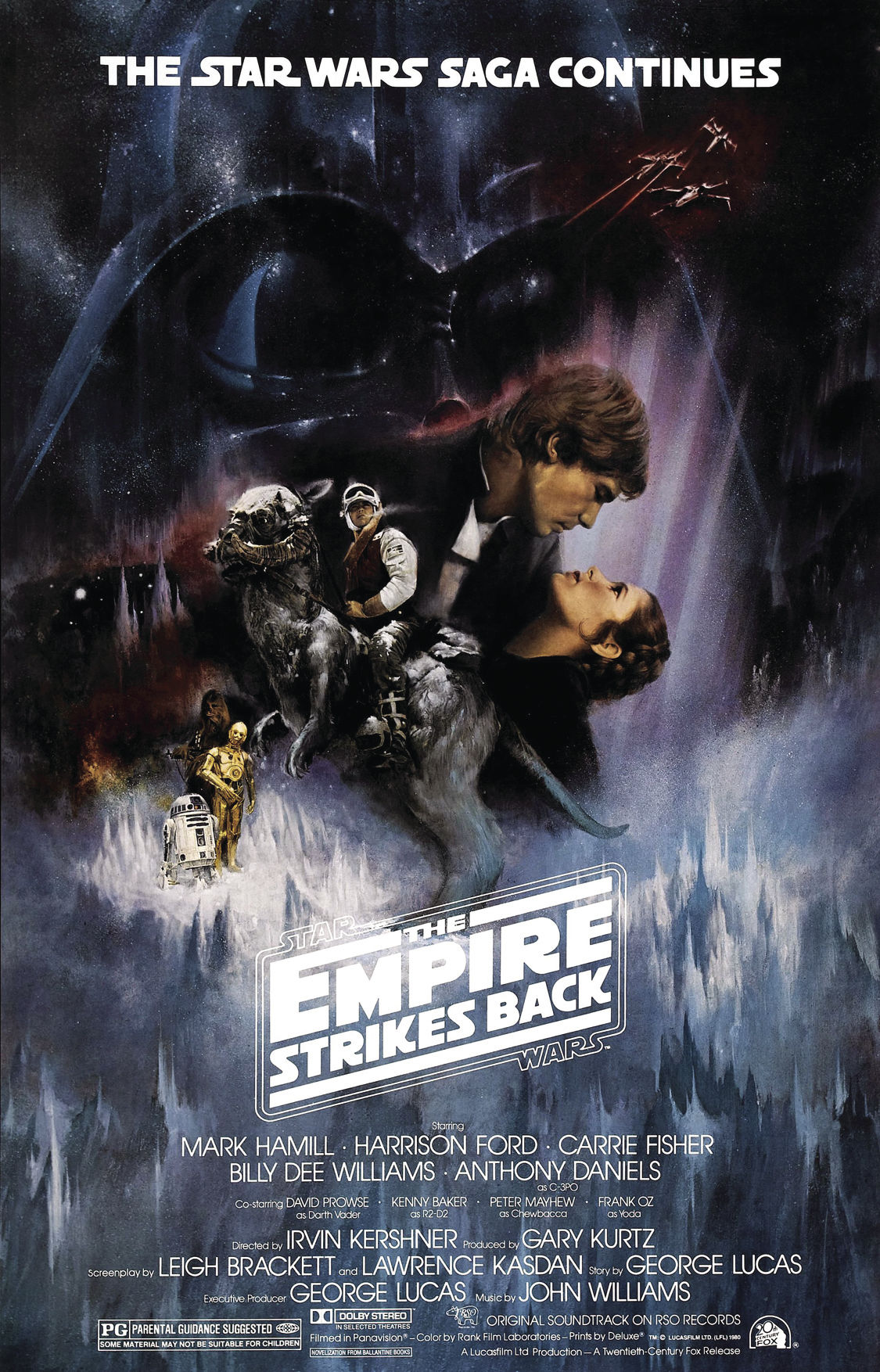 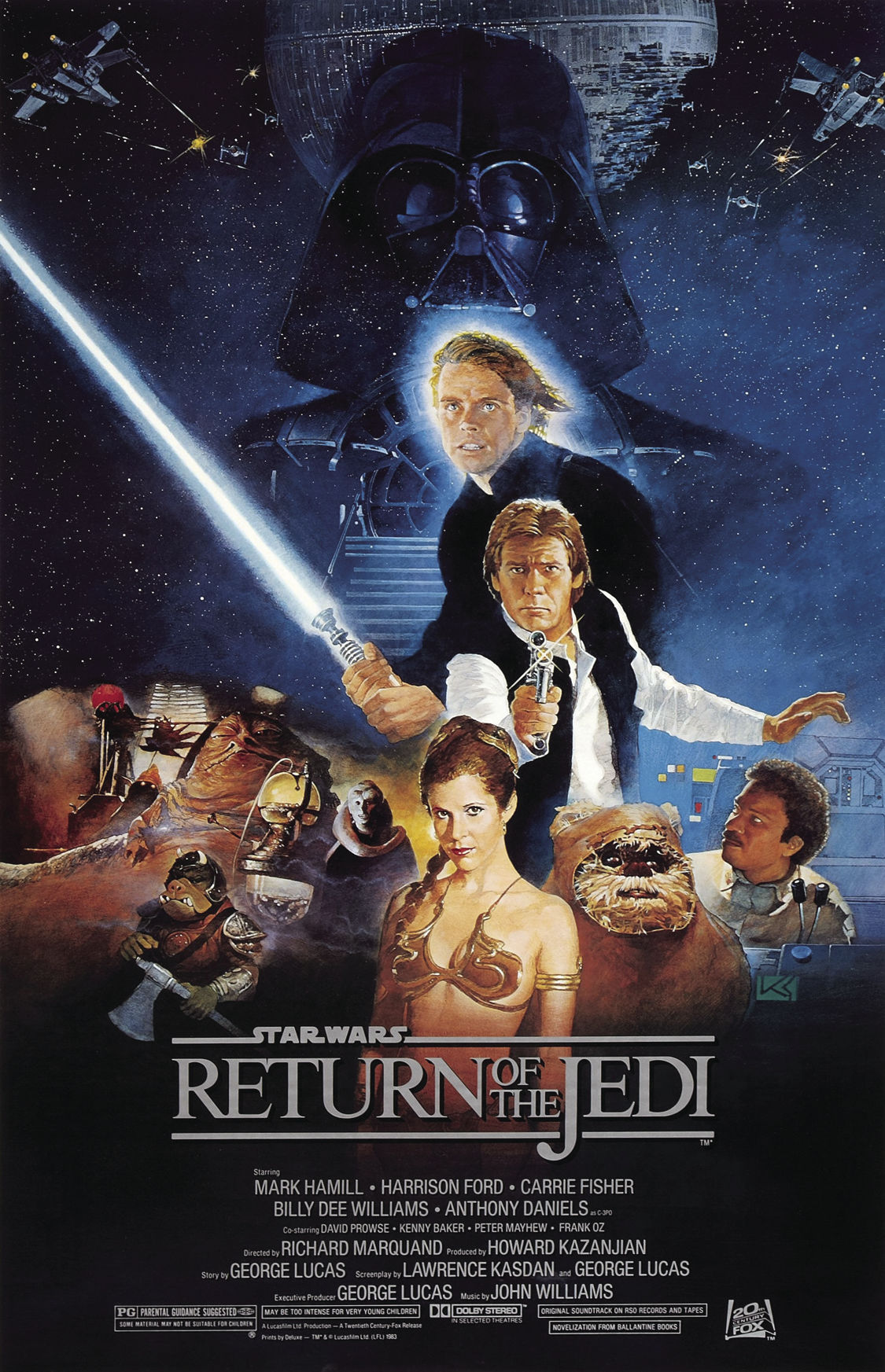 "Return of the Jedi" concluded the original trilogy in 1983 and, for 16 years seemed like it would be the last "Star Wars" movie. (COURTESY OF 20TH CENTURY FOX) 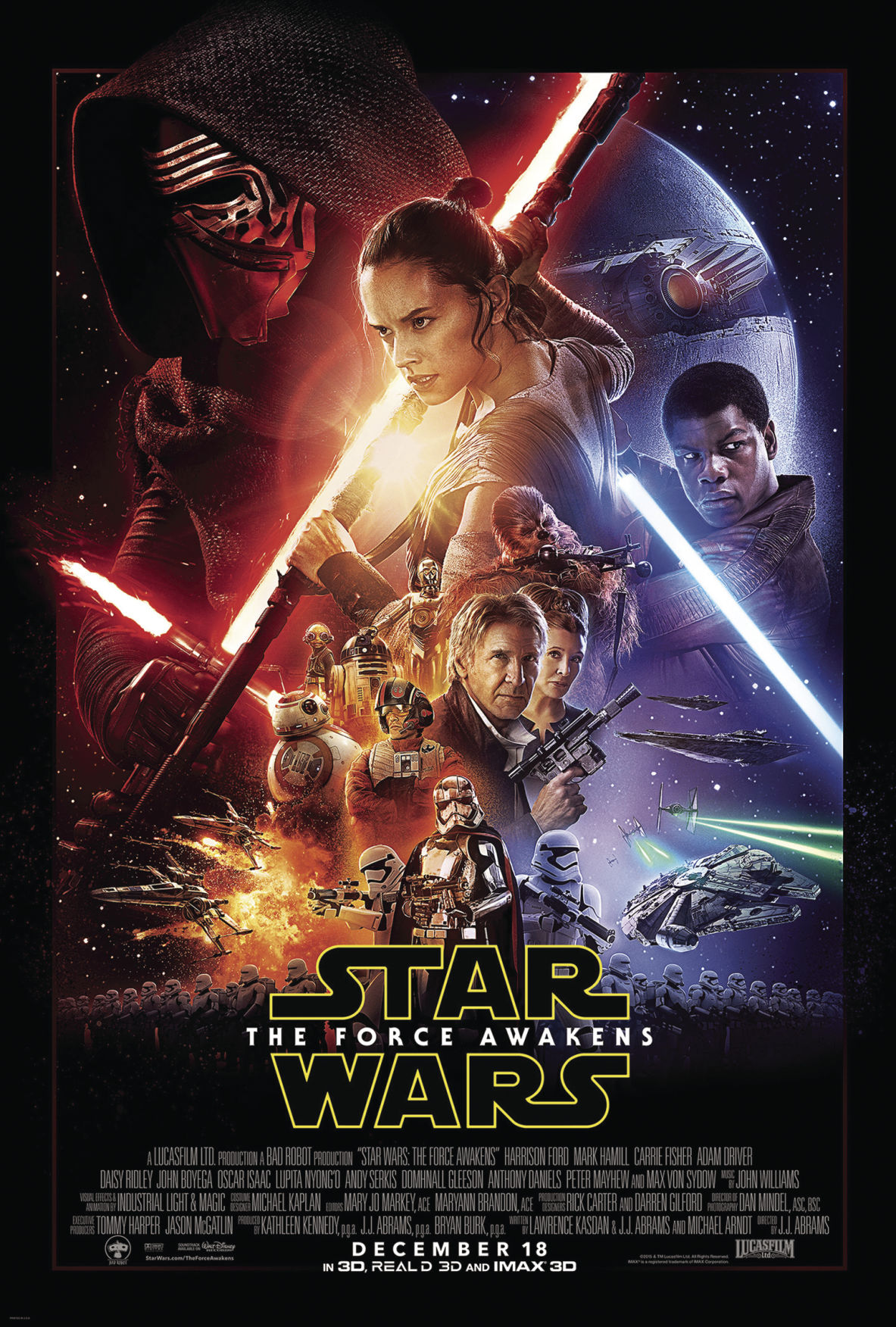 J.J. Abrams "Star Wars: The Force Awakens" was the first film produced by Disney after acquiring LucasFilms. (COURTESY OF LUCASFILMS) 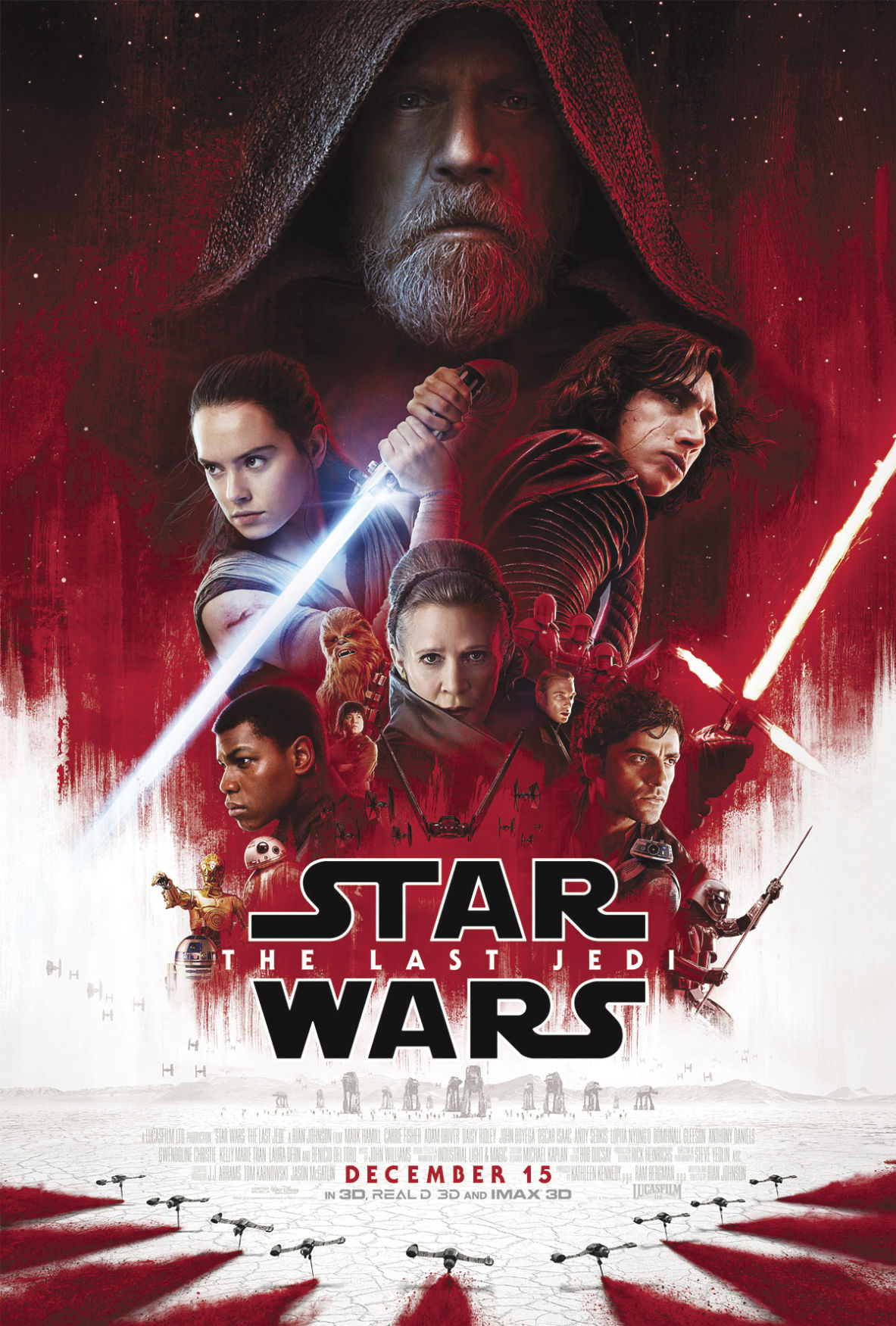 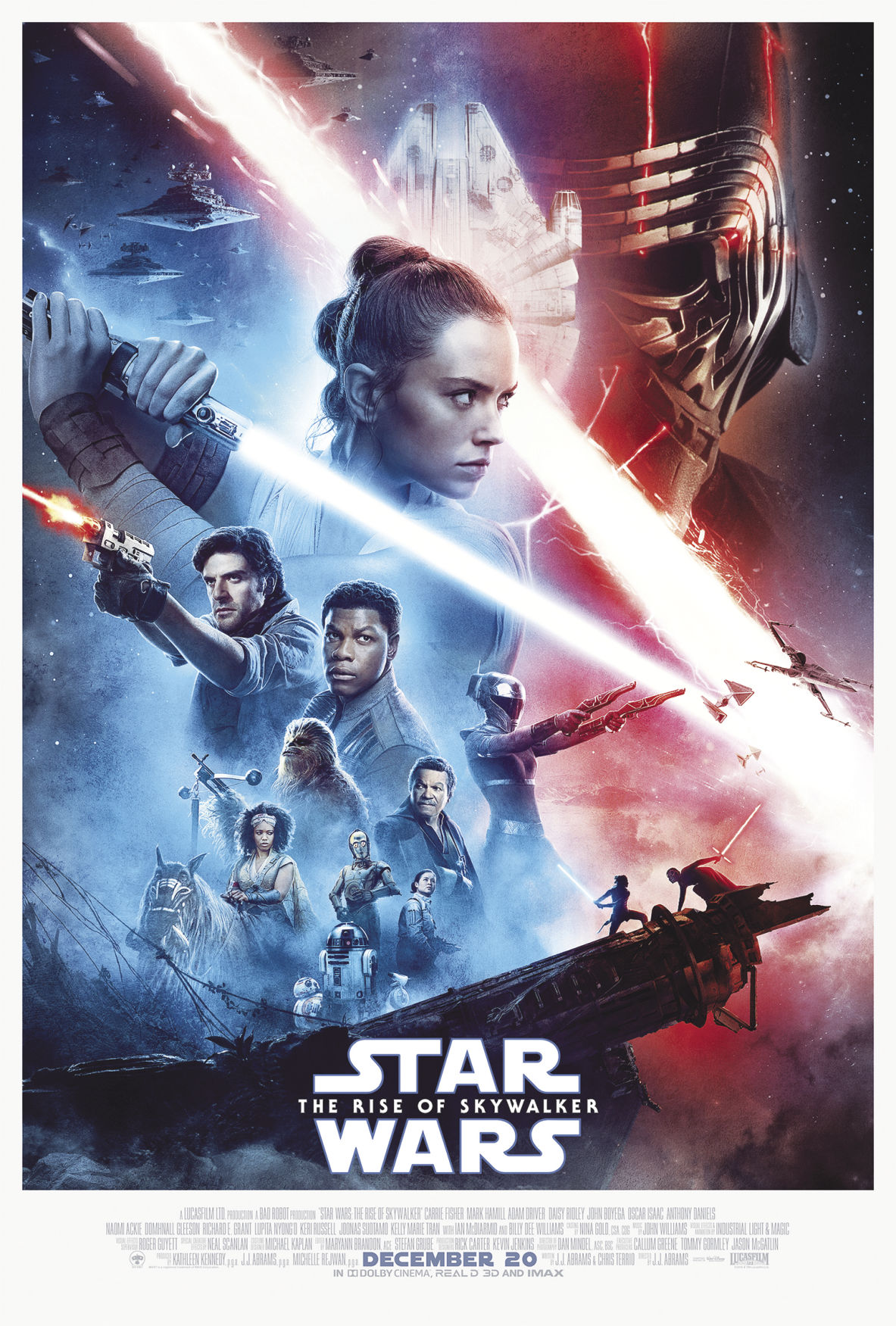 With the release of “Star Wars: The Rise of Skywalker,” the nine-film Skywalker Saga that began with 1977’s “Star Wars” has come to a close. While there will certainly be more “Star Wars” films, this is the end of the episodic adventures of Luke Skywalker, et al.

This weekend, I rewatched the eight films available for home viewing in chronological order for the first time. I skipped the side films “Rogue One” and “Solo” and focused on just the episodic films. Here are my capsule reviews of each film:

A deadly slow introduction makes this difficult to get into. The film does pick up with the pod-race sequence, and it ends strong with the lightsaber fight between Qui-Gon Gun (Liam Neeson), Obi-Wan Kenobi (Ewan McGregor) and Darth Maul (Ray Park), which remains one of the best of the whole series. The rightly maligned Jar Jar Binks is insufferably annoying, and Jake Lloyd as the young Anakin can’t carry the role. To be fair, it is hard to imagine anyone doing little Ani justice as the character is terribly written, a trait that would continue in the subsequent episodes.

Director George Lucas’ fixation on computer-generated effects fully takes over. Everything is too glossy and cartoony and lacks the grounded, tangible quality of the original series. This could be ignored if the characters, story and dialogue held interest. Alas, the love story between Anakin Skywalker (Hayden Christensen) and Senator Padme Amidela (Natalie Portman) is so poorly written and acted that we have zero understanding of their connection. Anakin comes off as a creepy stalker, who, at one point, says he is OK with dictatorships and admits to murdering women and children. Girl, you need to run. While we begin to see how the future Emperor Palpatine (Ian McDiarmid) manipulates the galaxy into war, which is potentially compelling, the execution is muddled and doesn’t carry the dramatic weight it should. For my money, this is the worst of the bunch.

The best of the prequel films, the film benefits from strong scenes of Palpatine’s attempt to manipulate Anakin into turning to the dark side of the Force. Palpatine feeds into Anakin’s ego, pride, jealousy and fear of the death of his loved one in way that is truly tragic, but Anakin is written too dumb, gullible and easily swayed. The final turn to the dark side is far too sudden. Still, for the first time in the prequels, there are some dramatic beats that work. McGregor and McDiarmid, the only two consistent elements in the prequels, deliver their strongest work.

The one that started it all. Lucas does a great job using familiar story structures and character archetypes to create a sci-fi/fantasy world the likes of which had never been seen. He seamlessly paired cutting-edge effects with fun and memorable characters, including Luke Skywalker (Mark Hamill), Han Solo (Harrison Ford), Princess Leia (Carrie Fisher), Obi-Wan (Alec Guinness), R2-D2 (Kenny Baker), C-3PO (Anthony Daniels), Chewbacca (Peter Mayhew), and Darth Vader (voice of James Earl Jones). While it is easy to rag on Lucas for what he would go on to do in the prequels, his creation of this beloved universe can’t be undersold. From this first film, it feels like a fully realized lived-in universe that is grungy, gritty and populated with weird and wonderful creatures.

While Lucas still wrote the story, he stepped back into a producer role and gave up screenwriting and directing duties for the first time, resulting in the strongest film in the franchise. Leigh Brackett and Lawrence Kasden’s script deepens and expands the story by punching up the humor and emotions. The banter-filled love story between Han and Leia feels genuine, and Ford and Fisher have palpable chemistry. Luke’s scene with Yoda (voice of Frank Oz) are so well-written and performed that we forget Yoda is a puppet. The climactic confrontation between Vader and Luke is thrilling and features one of the best twists in film history.

While it is the least successful of the original three, “Return of the Jedi” still offers a satisfying conclusion to Episodes I to VI by showing the redemption of Anakin/Vader. The scenes between Luke, Vader and Palpatine are among the most dramatically satisfying of the whole saga. You also get the scenes in Jabba the Hutt’s place, which are full of quirky aliens and the fight with the monstrous rancor. With the climax featuring a new Death Star, a lot of the film, unfortunately, feels like a rehash of “A New Hope.” As for the Ewoks, I’m fine with them. They’re cute, and I enjoy their contributions to the final battle.

J.J. Abrams’ “The Force Awakens” has taken criticism for essentially remaking “A New Hope,” but the new collection of characters — Rey (Daisy Ridley), Finn (John Boyega), Poe (Oscar Isaac), Kylo Ren (Adam Driver), and the droid BB8 — are immensely appealing and feel vital. Original characters are back and mix nicely with the new ones, and there’s just enough variations on themes to keep things fresh. Following the prequels, there’s a welcome return of sharp humor, real-world environments and emotional stakes that actually stick. It recaptures that same feeling of being introduced to a world that Lucas first gave us in “A New Hope.”

Perhaps the most divisive film in the whole franchise. Writer/director Rian Johnson takes over from Abrams and blends elements of both “Empire Strikes Back” and “Return of the Jedi.” Rey seeks out Luke for training, but he’s become disillusioned and bitter. Johnson subverts expectations and questions our ideas of the Force and the Jedi order. The film offers an exploration of failure and how to deal with and learn from it. There’s a subplot involving Finn and a new character, Rose (Kelly Marie Tran), that slows down the middle part, but, over all, this is a bold film that set up the potential to do something completely unique in “Episode IX.”

Abrams returns to co-write and direct the final installment and disregards much of what Johnson set up to do his own thing. Whether this is seen as a positive or negative depends on your response to “Last Jedi,” but, either way, it ultimately points to the biggest problem with this final trilogy: no clear voice and overall vision. Long-presumed dead Palpatine is back, and it is more of the same with tempting someone to the dark side. Still, the characters, humor and action remain strong, and it is a well-crafted film. Most important, the final moments hit the right emotional notes, which is all you can hope for.