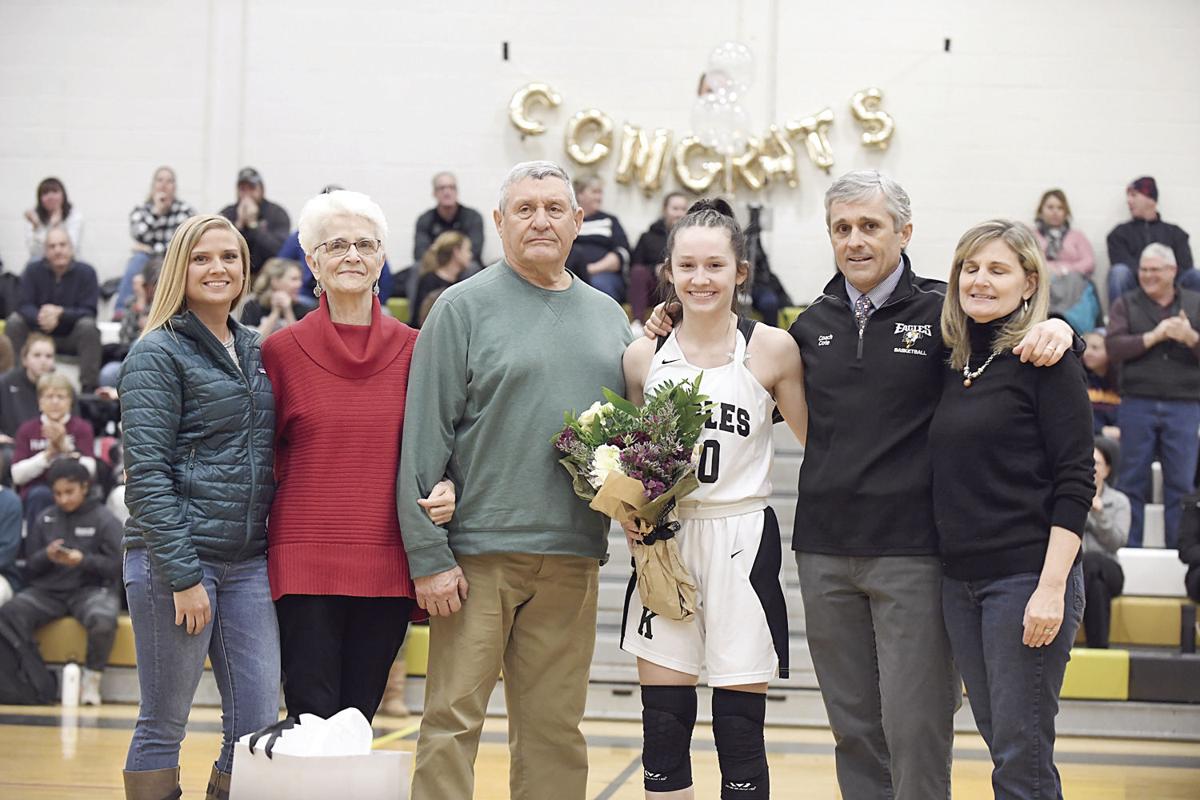 Liz Cote (center) was honored as the lone senior on the Kennett High girls' basketball team prior to the final regular season home game on Friday. On hand or the ceremony (from left) were her sister, Kim, grandparents Cathy and Dick Cote and her parents Steve and Lisa. (JAMIE GEMMITI PHOTO) 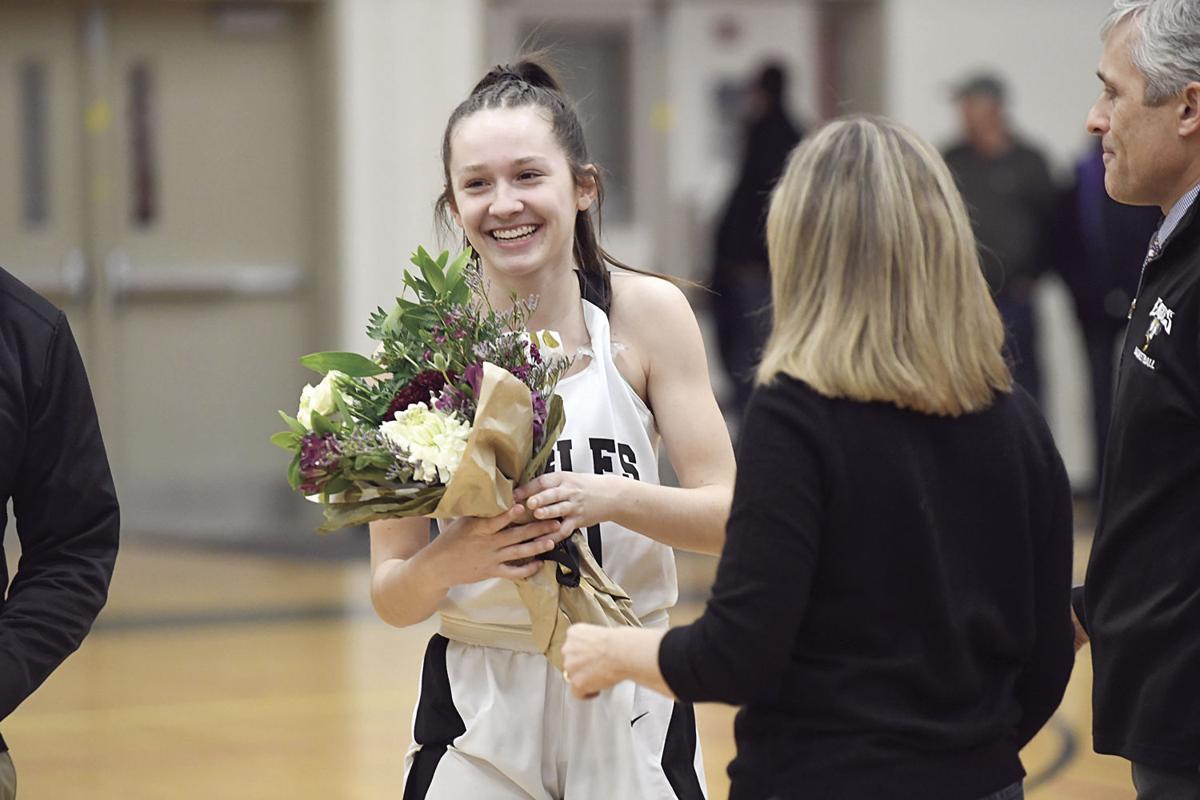 Liz Cote (left) was honored as the lone senior on the Kennett High girls' basketball team prior to the final regular season home game on Friday. (JAMIE GEMMITI PHOTO) 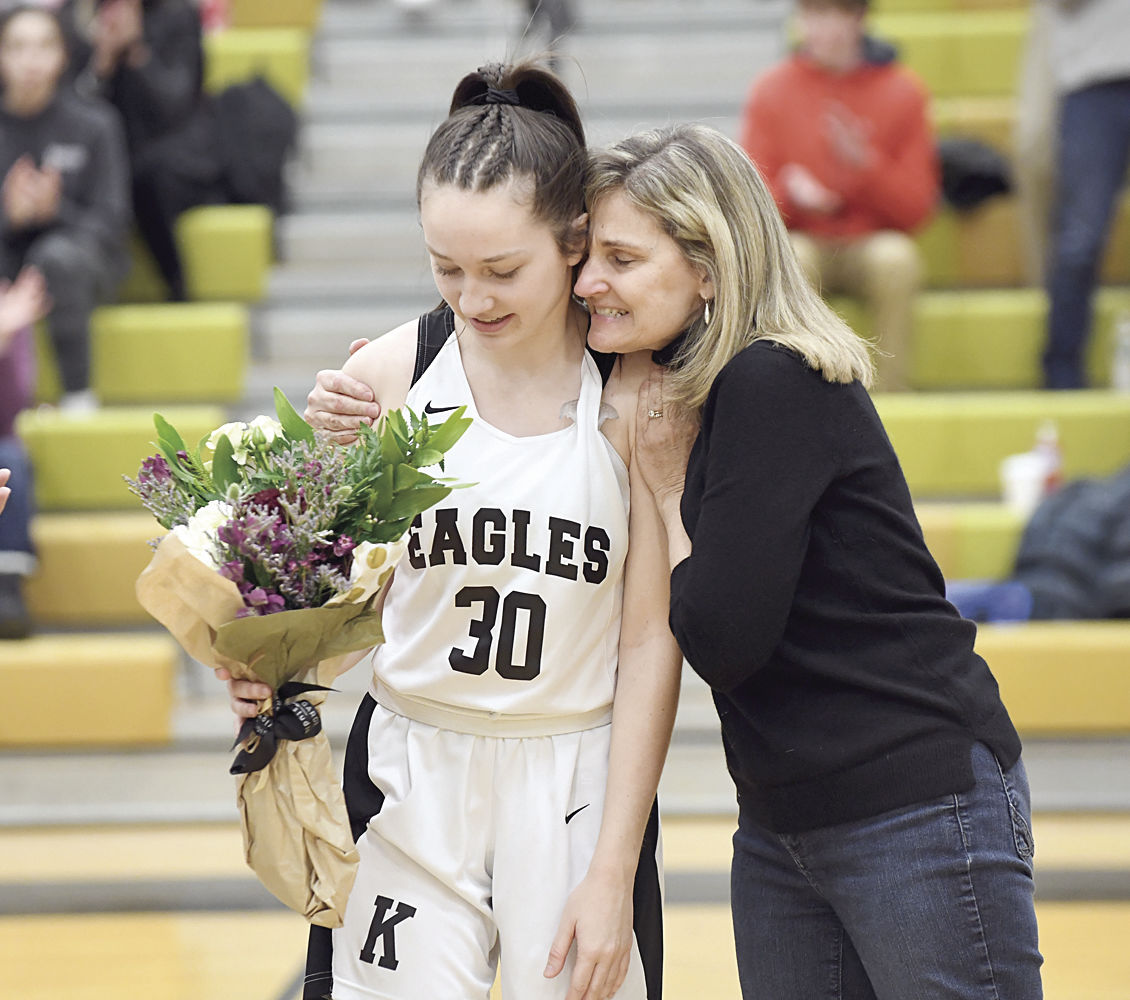 Liz Cote (left) gets a hug from her mom, Lisa, prior to the final regular season home game on Friday. (JAMIE GEMMITI PHOTO) 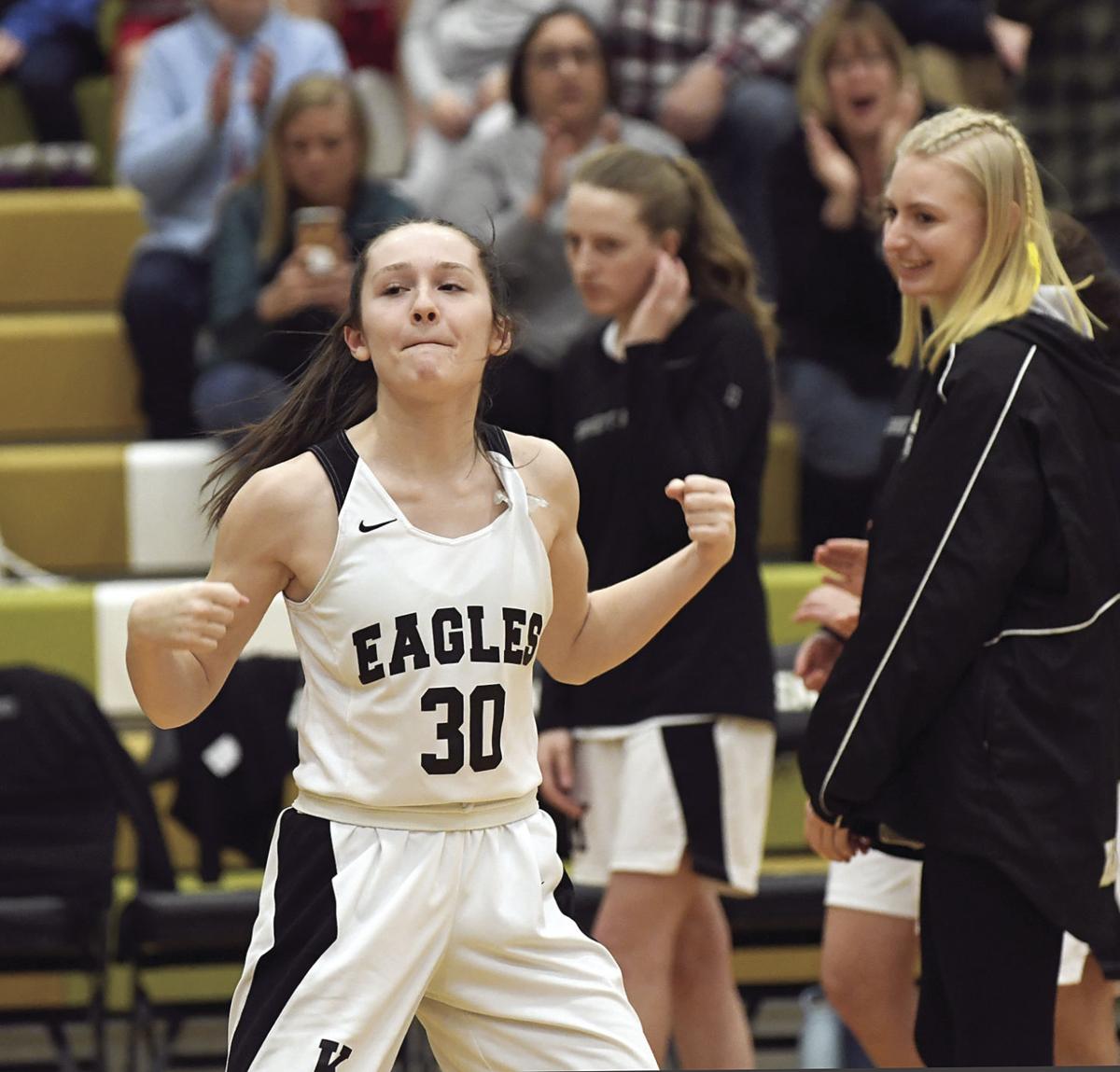 Liz Cote, the lone senior on the Kennett High girls' basketball team, is introduced on Senior Night prior to Friday's game against Hanover. (JAMIE GEMMITI PHOTO) 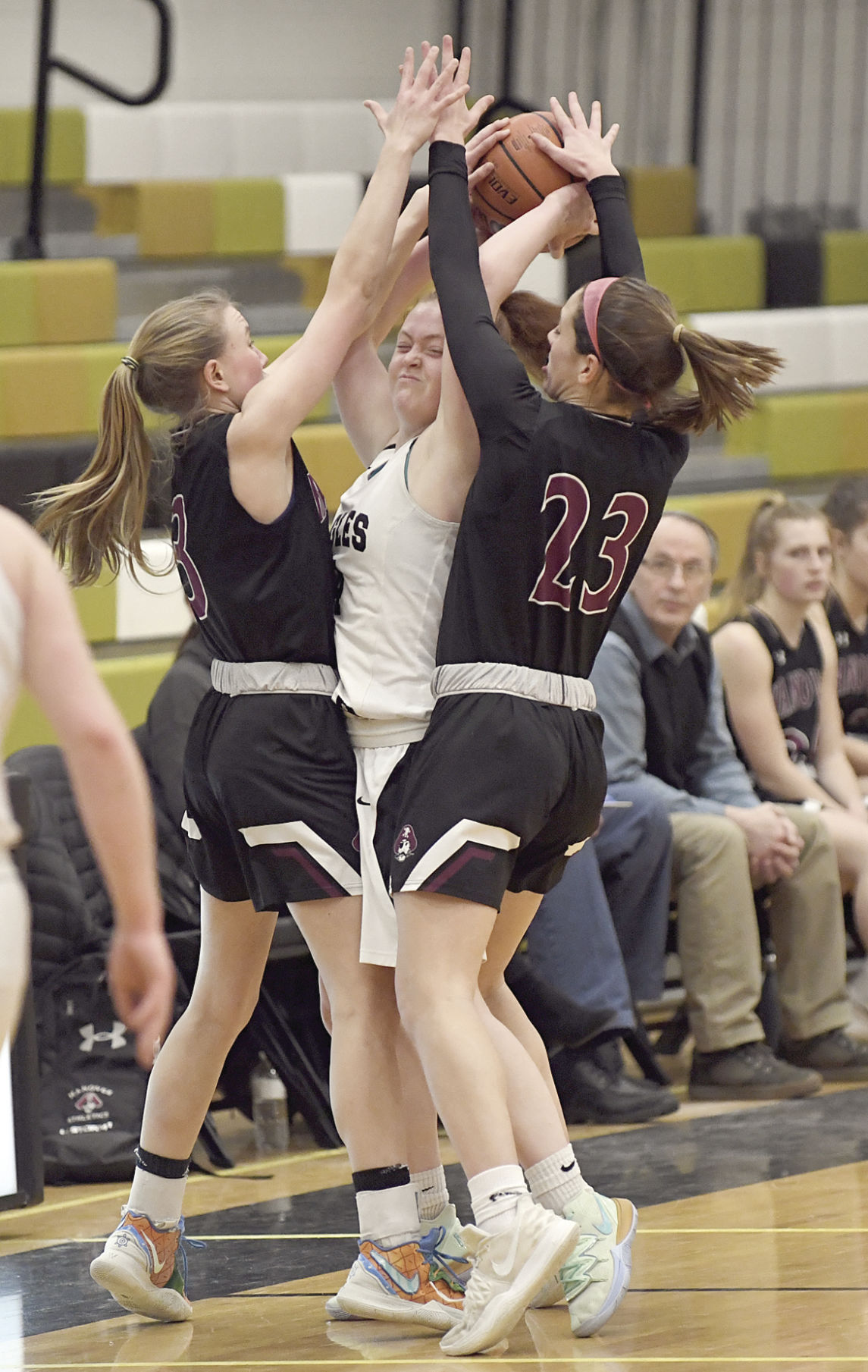 Liz Cote (center) was honored as the lone senior on the Kennett High girls' basketball team prior to the final regular season home game on Friday. On hand or the ceremony (from left) were her sister, Kim, grandparents Cathy and Dick Cote and her parents Steve and Lisa. (JAMIE GEMMITI PHOTO)

Liz Cote (left) was honored as the lone senior on the Kennett High girls' basketball team prior to the final regular season home game on Friday. (JAMIE GEMMITI PHOTO)

Liz Cote (left) gets a hug from her mom, Lisa, prior to the final regular season home game on Friday. (JAMIE GEMMITI PHOTO)

Liz Cote, the lone senior on the Kennett High girls' basketball team, is introduced on Senior Night prior to Friday's game against Hanover. (JAMIE GEMMITI PHOTO)

CONWAY — In the first meeting with Hanover since the state title game last March, the Kennett High girls’ basketball team found out first hand Friday night (Feb. 21) what many around the Granite State already knew — this group of Marauders might be better than the one that won the Division II championship. Hanover put the defensive clamps on the Eagles, holding the hometown flock to a season-low five first-half points on its way to a 59-23 victory in the Peter Ames Gymnasium.

“I think they’re better than last year,” said Larry Meader, Eagles’ head coach. “They’ve got 10 kids who can play, and play well. Their coach (Dan O’Rourke) can sub five at a time and not miss a beat. They’re very good. I think they’ll be tough to beat.”

The loss dropped Kennett to 13-4 on the season and into fifth place in the Division II standings.

It was tough night for the Eagles, who were a long way from full strength. Sophomore Sam Habert (injured ankle) and freshman Catherine Chick (injured knee) missed the game, while juniors Jaelin Cummings and Olivia Scribner along with freshman Sydnie Chin had been sidelined with flu but tried to play Friday.

“I’m glad this all happened last week and not this week,” Meader said, laughing. “Hopefully, we’ll get as healthy as can for Bow on Friday and be ready to go in the playoffs next week.”

Meader gave the team the weekend off to get well.

Kennett has just one game left on the regular-season schedule — trip to Bow — to play the 10-6 Falcons, who currently reside in ninth in the league table.

“They’re a good team,” Meader said. “We know we’re going to have to play well. Hopefully, we’ll get in four good days of practice to get ready.”

Kennett went 20-2 last winter and reached the state championship game against Hanover (21-1) at Southern New Hampshire University in Manchester. The Marauders beat the Eagles 52-41 in the title game.

Prior to Friday’s tipoff, the Eagles honored their lone senior Liz Cote for her four years of commitment and dedication to the program. It was quite a ceremony with fans holding up Liz Cote faces as a tribute to player who has meant so much to this team,

Jon Judge, the voice of the Eagles, read a write-up prepared by Meader.

“Our one and only senior this year is a pretty special one. She is a four-year varsity player, a four-year starter and a captain the last two seasons.

“When she came in as a freshman, she immediately became an impact player off the bench before eventually earning a spot in the starting lineup. Her freshman year she helped her team qualify for the tournament for the first time in four seasons. One of the main contributors her sophomore year, she helped lead her team to a 14-4 record and the No. 5 seed in the state tournament.

“She followed that season up with a 17-1 junior season and a trip to the state championship game — the first for the Eagles since 2020. In addition she was named to the All-State Honorable Mention team and was awarded the prestigious New Hampshire Basketball Officials Sportsmanship Award.

“This year she having arguably the best season of her career, leading her team in scoring, second in rebounding as our point guard in what should be a First-Team All-State season. She is one of the main reasons for her team’s success. An outstanding captain for the team and representative for our school. After graduation she will be continuing her basketball career at the University of New England in Biddeford, Maine, while majoring in business.

“Thank you Liz for everything you have given to the program the last four years. You leave it in a better place. We will miss you and our loss is UNE’s gain. Please congratulate No. 30 Liz Cote.”

Cote, who has over 900 points in her Kennett career, was joined at center court by her parents, Lisa and Steve, and her sister, Kim, and grandparents, Cathy and Dick Cote, who seldom miss a game.

“It’s easy to talk about Liz, she’s such a great player and great person,” Meader said. “She’s meant a ton to our program. She helped turn it around. I think we had a good celebration for Liz. She enjoyed it, other than the end result.”

Hanover jumped out to a quick 4-0 lead on baskets by seniors Isabella Bardales and Madison McCorkle, a favorite for Division II Player of the Year.

The Eagles got some good looks at the basket but not a lot fell and they were limited to one shot and done most of the night. Sierra Parsons put KHS on the scoreboard with 2:49 to play in the first quarter with a runner off the glass to trim the deficit to 4-2.

The Marauders went on a 6-0 run (a Willet Parkins free throw and two layups and free throw by Stella Galanes) to grow the lead to 10-2.

Hanover led 12-4 after the opening eight minutes. The guests then outscored KHS 14-1 in the second period to lead 26-5 at halftime.

Cote opened the third quarter with the first of three three-pointers on the night, but the Marauders outscored the Eagles 12-9 in the frame to lead 38-14 heading into the fourth qaurter.

Cote led the Eagles with nine points; Ella Chandler and Parsons both added four points; while Mariah Parker and Scribner each had three points.

Galanes, a freshman, led all scorers with a game-high 14 points. Parkins and McCorkle also had double-figures, finish gin with 11 and 10 points, respectively.

Earlier in the week, on Tuesday, Kennett beat Plymouth 40-31 in a close contest. The Eagles led 12-9 after the first period and 20-19 at halftime.

KHS outscored the (5-10) Bobcats 12-7 in the third quarter to open up some breathing room in the final quarter.