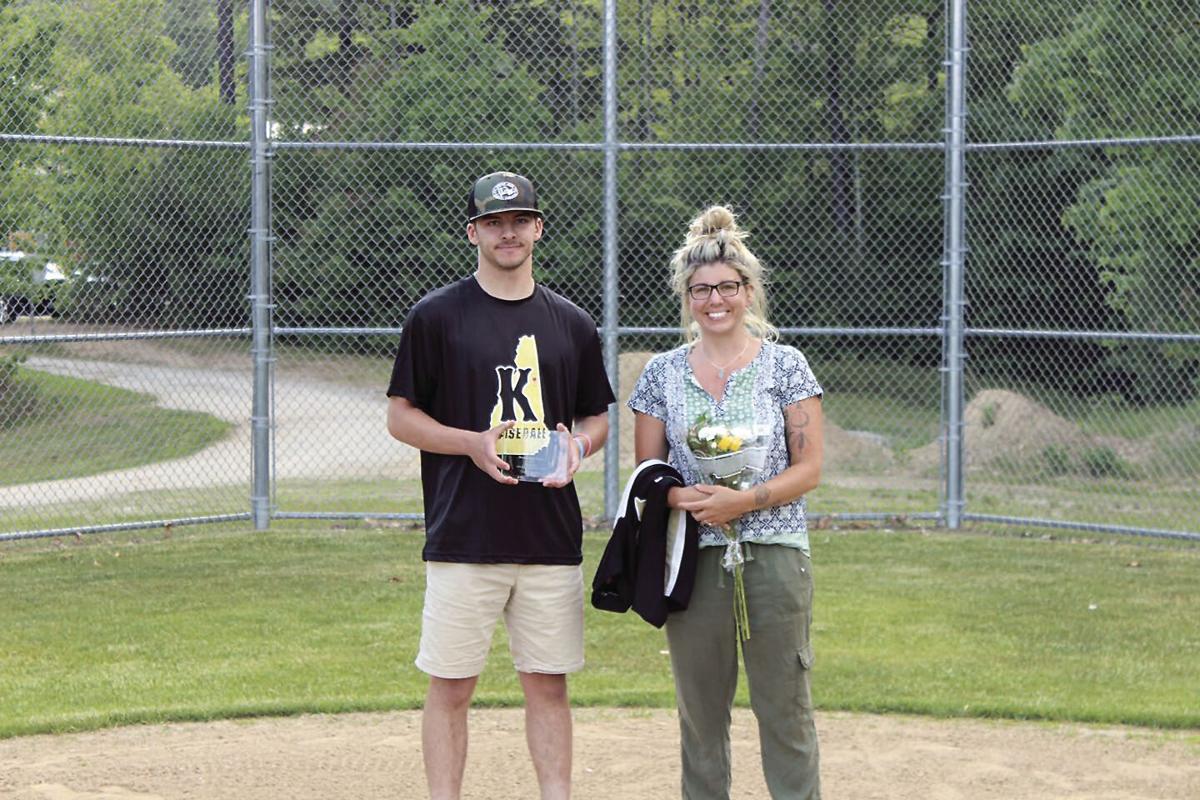 Zach Smith with a family member on senior day for Kennett High baseball. Coach Josh McAllister presented Zach with his third letter in the sport on June 12. (COURTESY PHOTO) 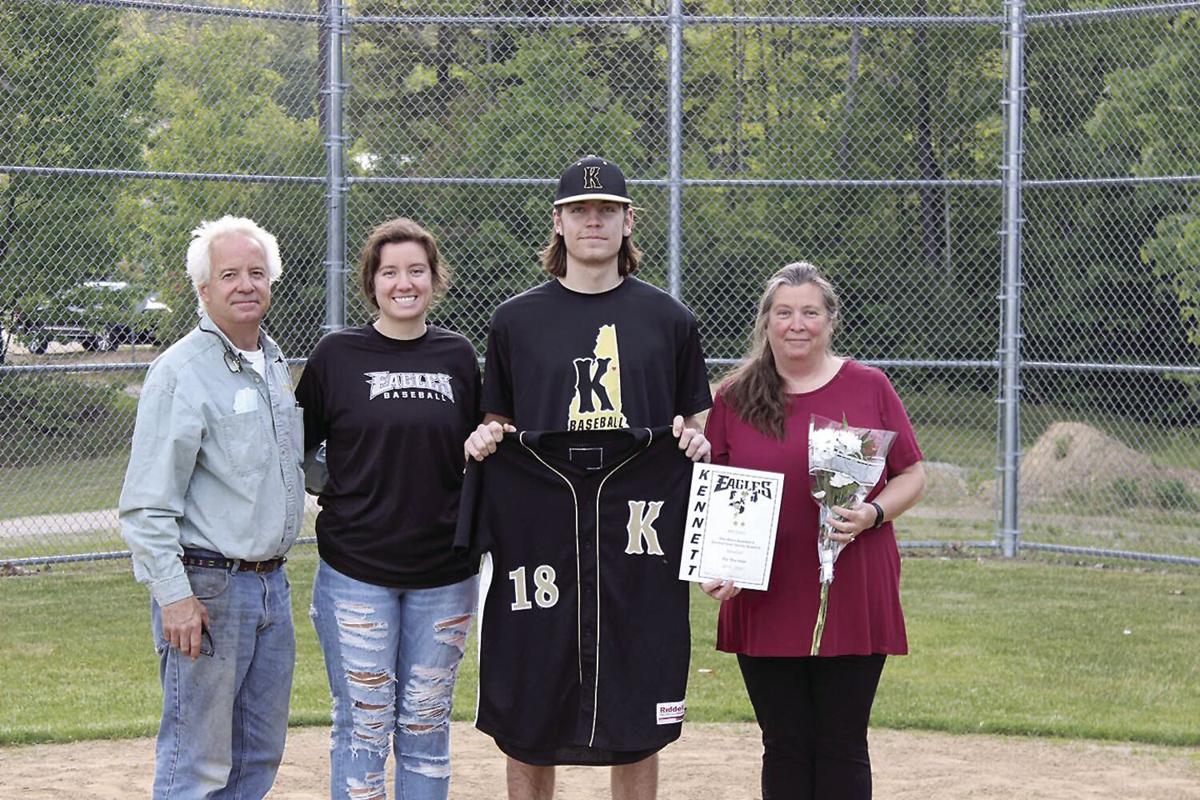 Will Eaton with family members on senior day for Kennett High baseball. Coach Josh McAllister presented Will with his second letter in the sport on June 12. (COURTESY PHOTO) 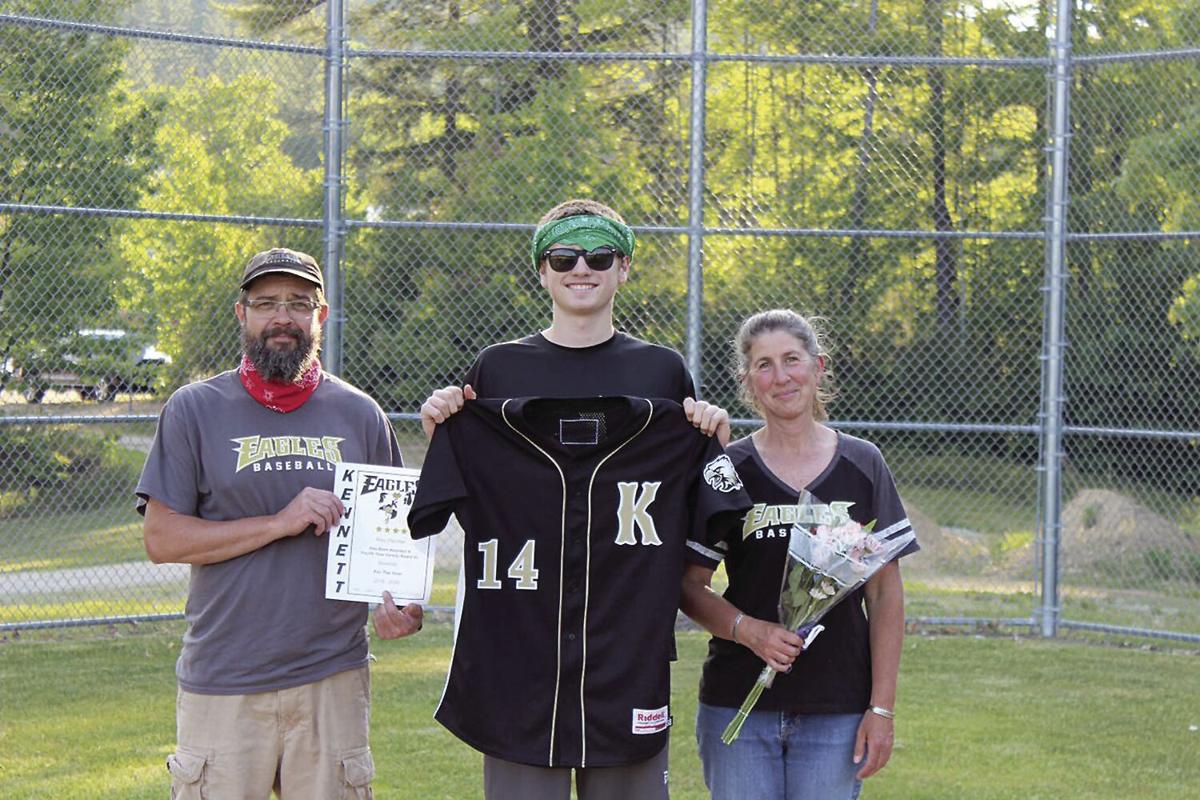 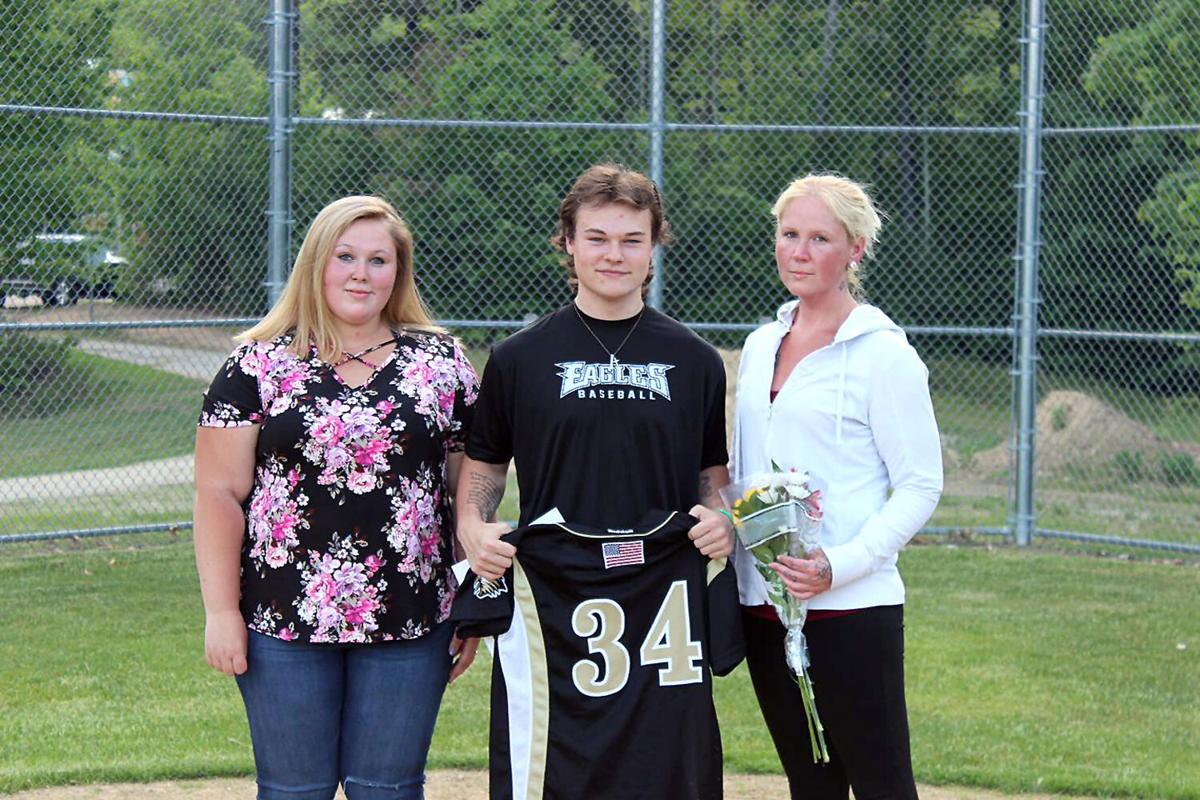 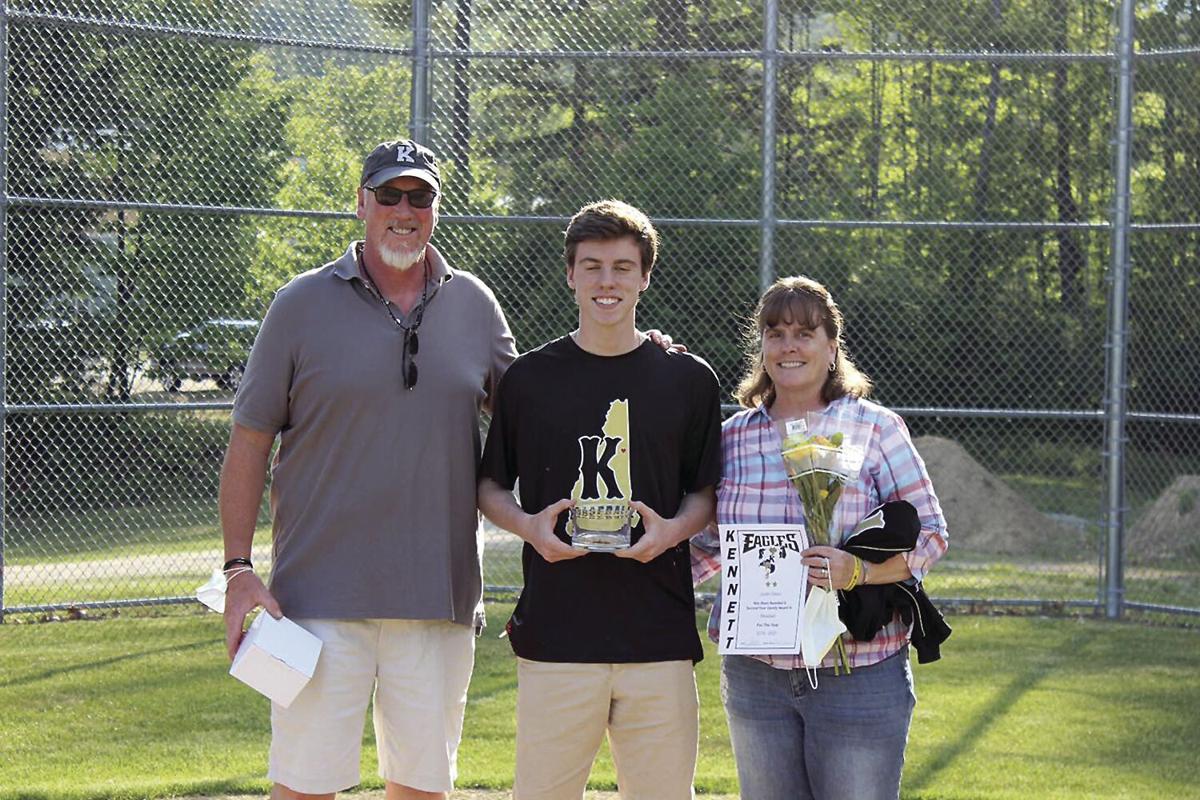 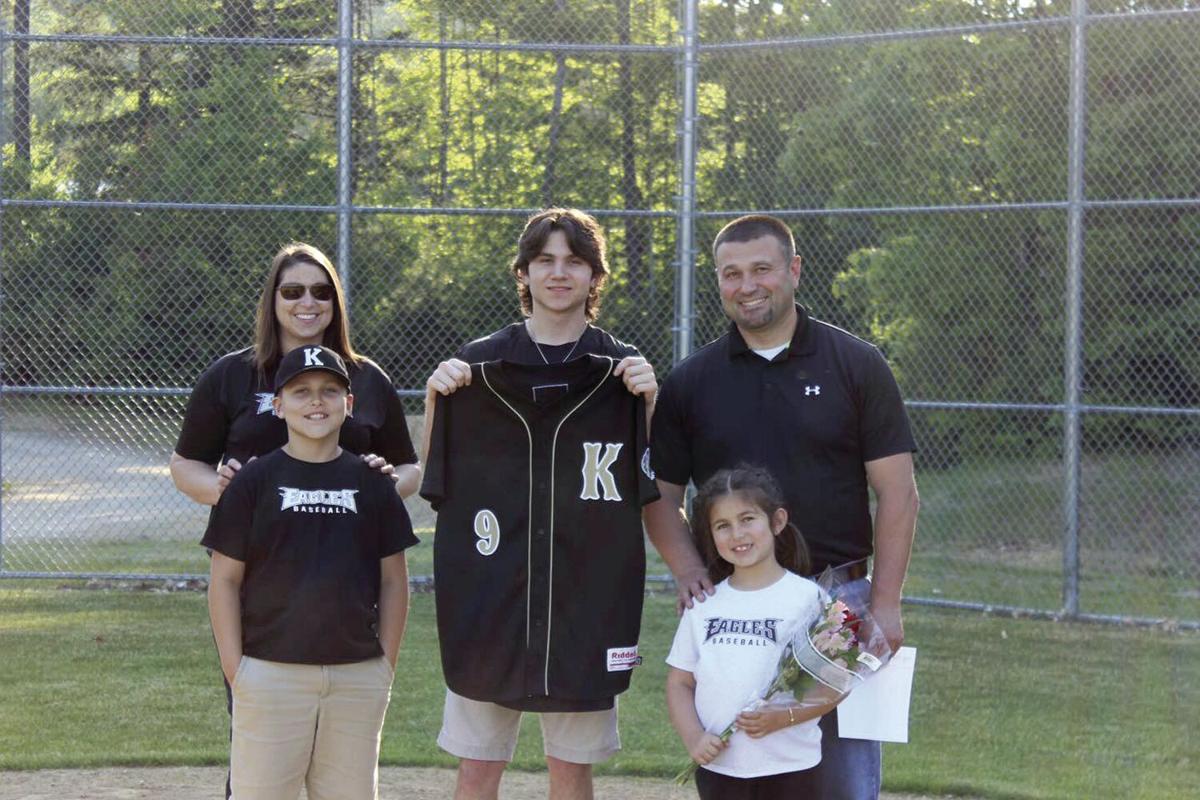 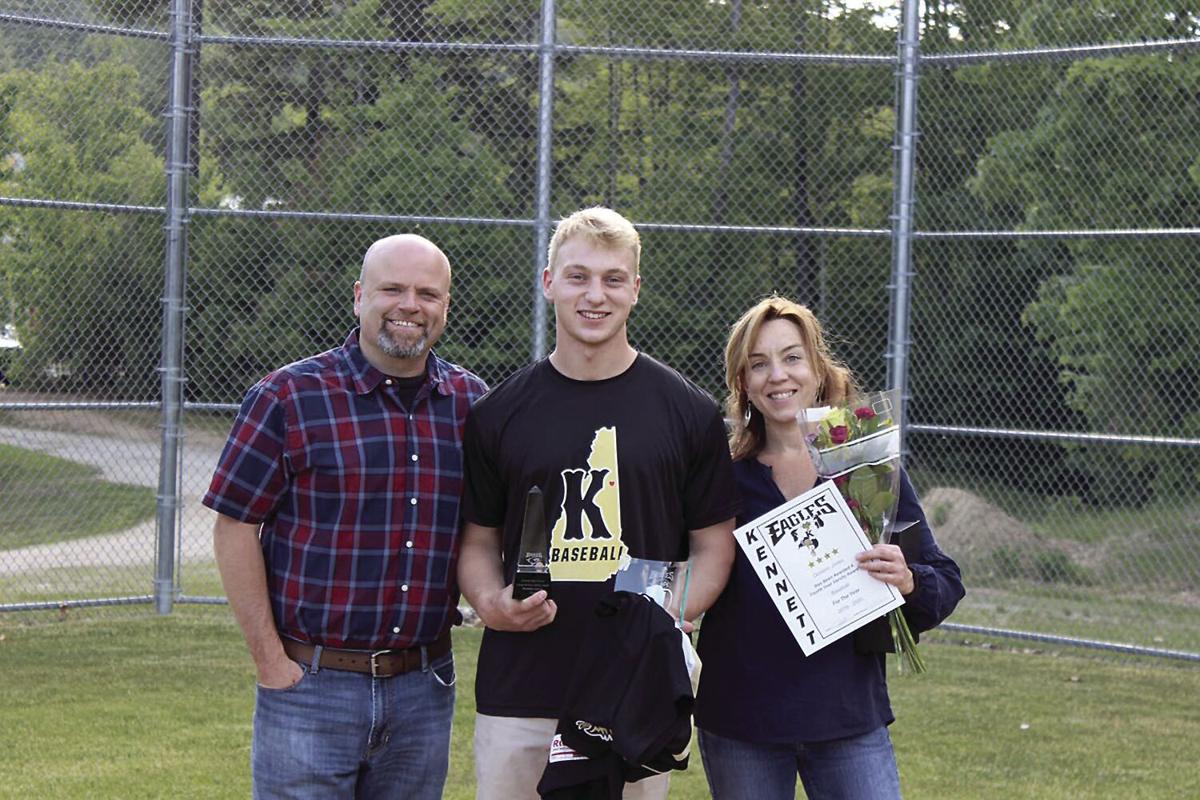 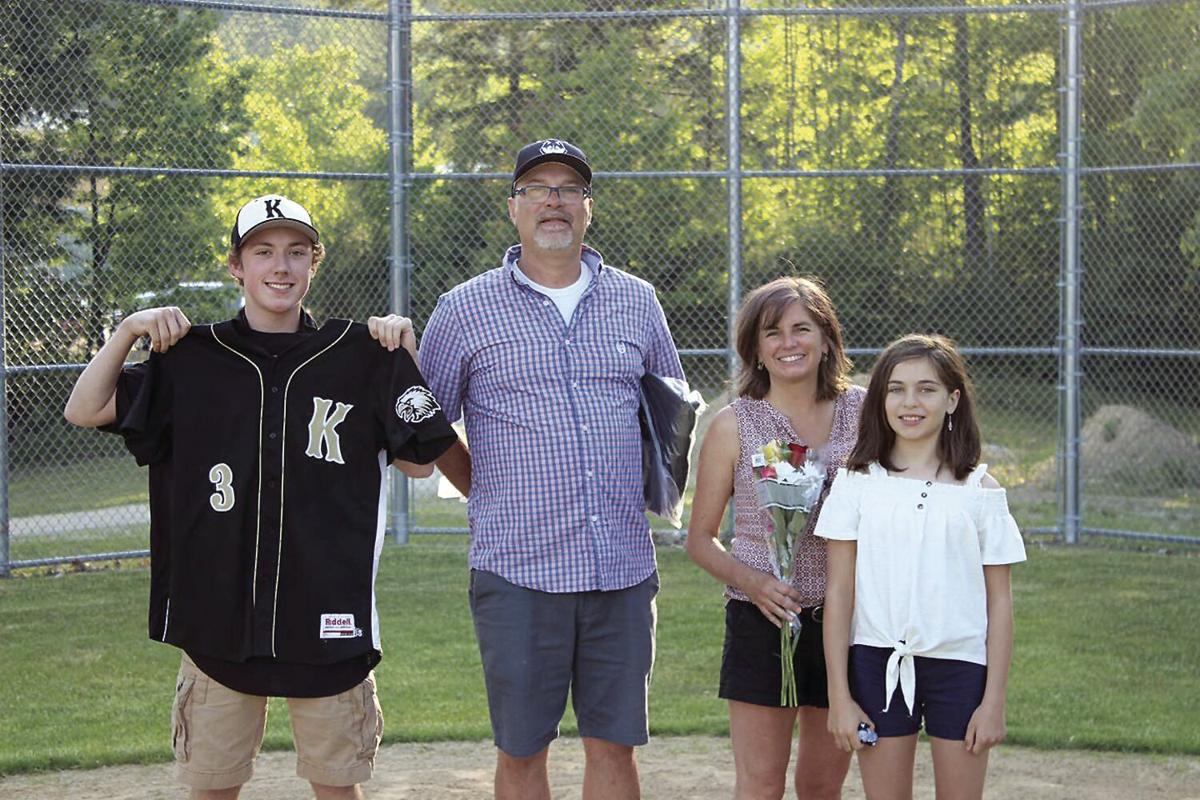 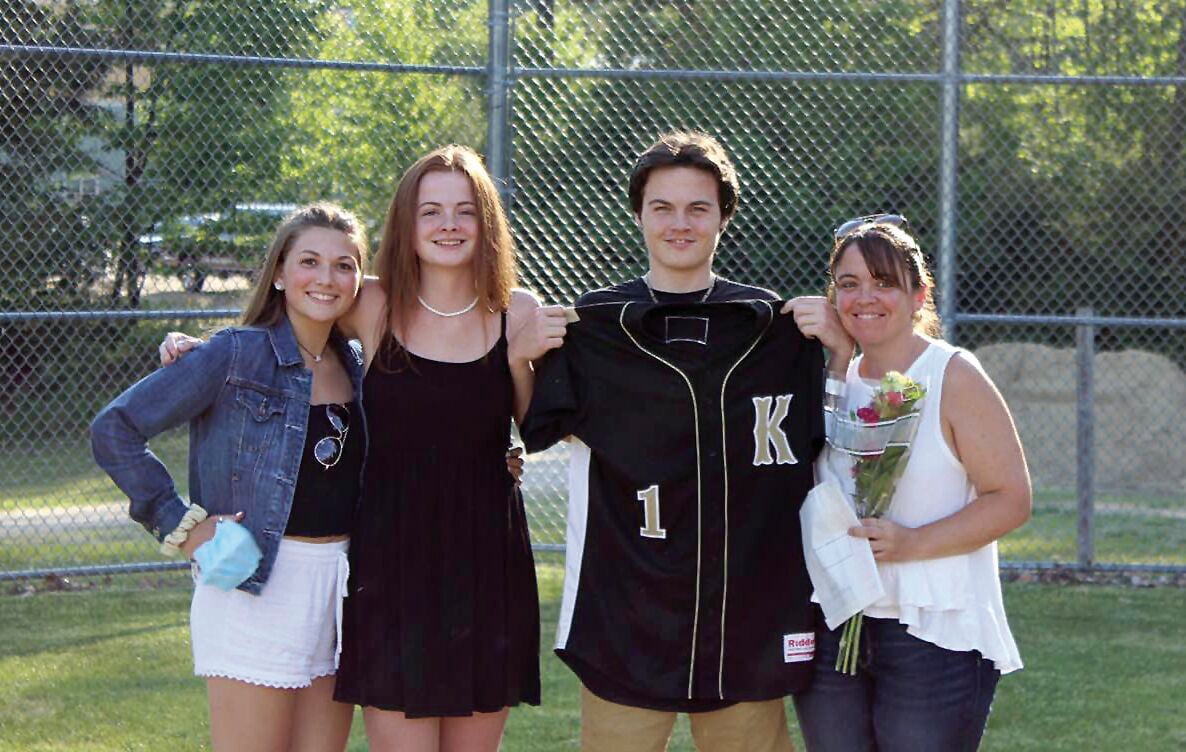 Zach Smith with a family member on senior day for Kennett High baseball. Coach Josh McAllister presented Zach with his third letter in the sport on June 12. (COURTESY PHOTO)

Will Eaton with family members on senior day for Kennett High baseball. Coach Josh McAllister presented Will with his second letter in the sport on June 12. (COURTESY PHOTO)

CONWAY — The Kennett High baseball team came into this season as legitimate contenders for the Division II State Championship. Unfortunately, before a pitch was throw or a ball batted, the New Hampshire Interscholastic Athletic Association made the decision to cancel the season due to the COVID-19 pandemic.

The Eagles, however, remained in contact with Coach Josh McAllister and the coaching staff, chatting remotely and even doing drills. The remote season wrapped up last month with McAllister meeting with his seniors and their parents to celebrate their commitment and dedication to the program over the years.

Seniors recognized were Riley Fletcher, Nate Grames, Dom Jones and Ethan Ouellette, who received their fourth varsity letter; Zach Smith got his third letter; Will Eaton, Justin Olson and Austin Parker received their second letter; and Devin Nordlund got his first in a ceremony on the Bob Burns Baseball Field.

“The last chapter in a great story has been written,” McAllister posted on the team’s Facebook page. “The ending was certainly unexpected; a curveball so to speak.

“The Kennett Baseball Class of 2020 has completed their careers in our program. A program they helped bring back to life. A program that will forever be impacted by the things they accomplished and their desire for success.

“Their first year in the program, we were a two-win team. Their second year, we were in the Final Four with many of them starting s sophomores. As seniors, we hoped to be competing for a state championship.

“The on-field success is obvious and important, but the culture of winning that this group has fostered, each of them with their own and different contributions, is the lasting impact of this great class of seniors.

“We loved every minute of it with you guys.”

For two-thirds of the seniors, they’ve been able to return to the diamond this summer and are playing ball for Coach McAllister in a New England Independent Baseball League at the Eagles, who made a successful home debut last Thursday at Coach Burns Field.

“That class of senior was so special from a cultural standpoint,” McAllister said by phone on Friday, “that’s why having some of them play with me and the younger guys in the summer league was so important. We’re lucky to have Zach, Riley, Devon, Will, Austin and Ethan with us. I couldn’t ask for better mentors for our program.”

The Eagles, who had played their first games on the road are one of 20 teams in the NEBL this summer. On Thursday, they hosted and defeated Moultonborough/Interlakes. 9-3.

“The No. 1 goal for me was to see what I have coming back net year,” said McAllister. “I know we have Harrison Keeler to pitch, and he’ll be a legit No. 1, but who else? This is a great opportunity for our younger guys to get innings on the mound, at-bats and have fun. Of the graduating class we had 183 career hits, and only have 40 career hits returning. For me, it’s fun to get a glimpse of what we might look like next spring.”

McAllister is getting his fill of baseball this summer. He’s also coaching his son Jack’s U10 team in the New England Elite Baseball League.

The Eagles are scheduled back in action at The Bob on Tuesday at 5:30 p.m. when Portsmouth comes to Conway. The local nine are also slated to host Lincoln/Littleton on Thursday at 5:30 p.m.

In Thursday’s win, the Eagles stole a season-high 11 bases.

Fletcher, Parker, Brady Robitaille and Ryan Allen each had a pair of hits in the win. Allen also swiped two bases and scored two runs.

Nodlund started on the mound, tossing three solid innings, and four other Eagles also saw the bump on the night. There are 18 boys on the team.

“We have four freshmen on the team this summer, and three of them (Bridger Viger, Jack Robinson and Sam Seavey) have legitimate potential to impact the varsity program next season,” McAllister, who is joined in the dugout by assistant coach Seth Allen and bullpen guru David “Doc” Walker, said. “We have an interesting balance on the team. I play everybody. The goal is to get everyone the same amount of innings pitched and at-bats.”

He added: “The seniors are always working with the younger guys. (Catcher) Jack Robinson has been working with Will. Will Eaton will be a wonderful baseball coach in the future. He has such a great demeanor.”

The team is scheduled to wrap up the regular season with a double-header on Aug. 1.

In this new challenge with the COVID-19, McAllister, who helped write Gov. Chris Sununu’s COVID-19 Ropening Guidance for Amateur and Youth Sports with DJ Bettencourt, director of policy for Sununu, and Rep. Ed Butler (D-Hart’s Location), said people are adjusting.

“Having helped write the guidelines, I had some idea of what the challenges might be,” he said. “We have very little contact between players and coaches. We play with our own game ball, and our opponents have their own game ball. All the parents sit in different pods, and we have a designated area by the dugout where the players spread out in their lawn chairs.”

He added with a grin: “It’s hard to coach without spitting sunflower seeds. (Laughing) The guys just get to hear me talk a lot more.”

McAllister likes his team, and above all, is thrilled to see America’s favorite pastime in full swing.

“I feel really good about the future,” he said. “We lose a ton of great people, but we have another quality group of kids ready for their opportunity. We might now win 27 games like we did over the past two years, but next year, we could have 40 kids who aren’t already in the program trying out. We had 25 freshmen this past season, and are looking at 18 or more next season. As a coach, I couldn’t be happier.”