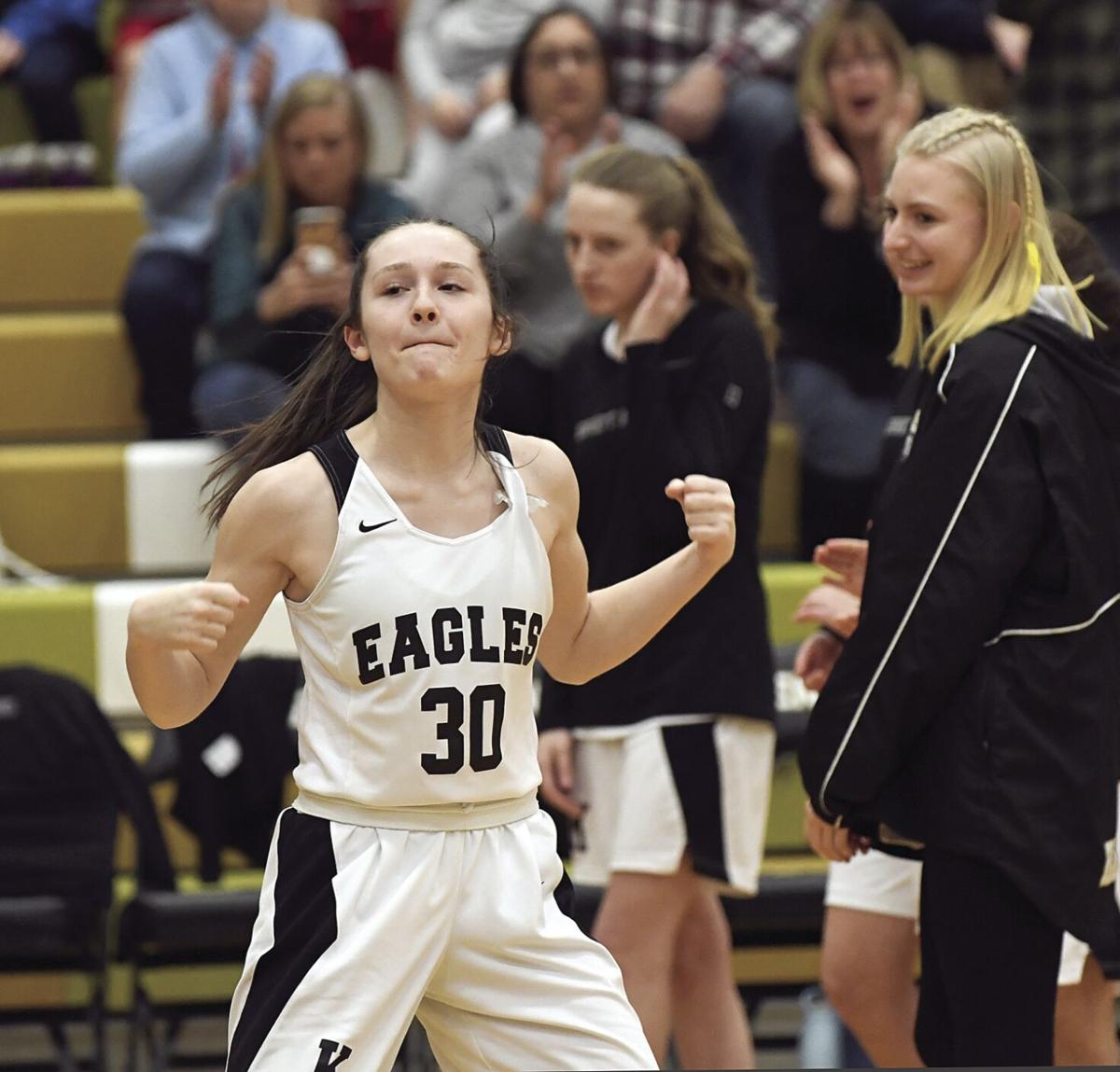 Liz Cote, the lone senior on the Kennett High girls' basketball team, is introduced on Senior Night prior to the final game against Hanover. (JAMIE GEMMITI PHOTO) 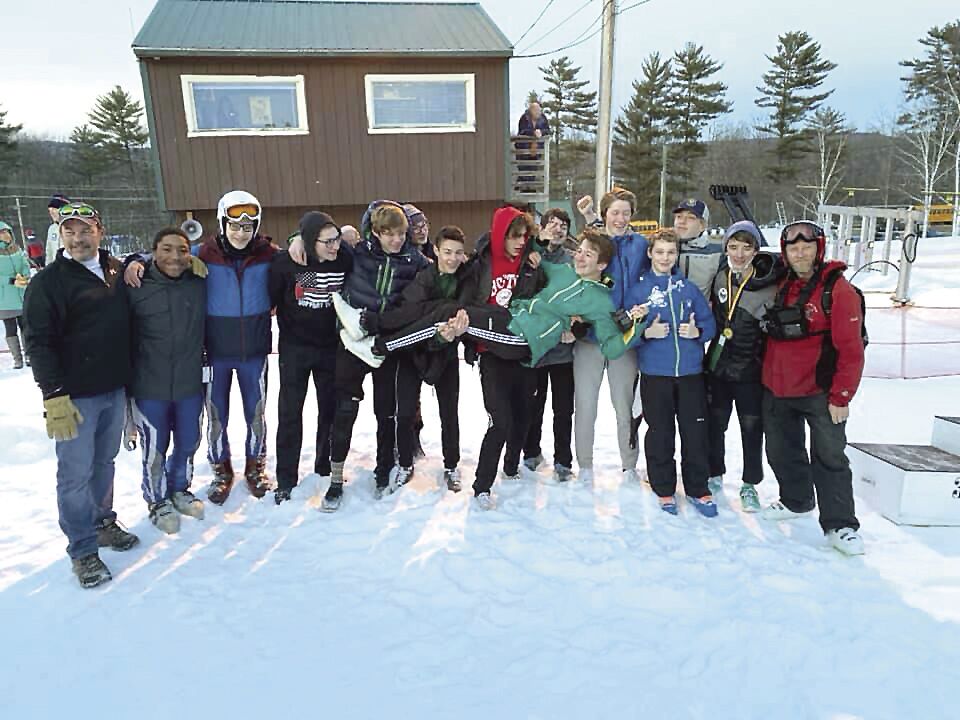 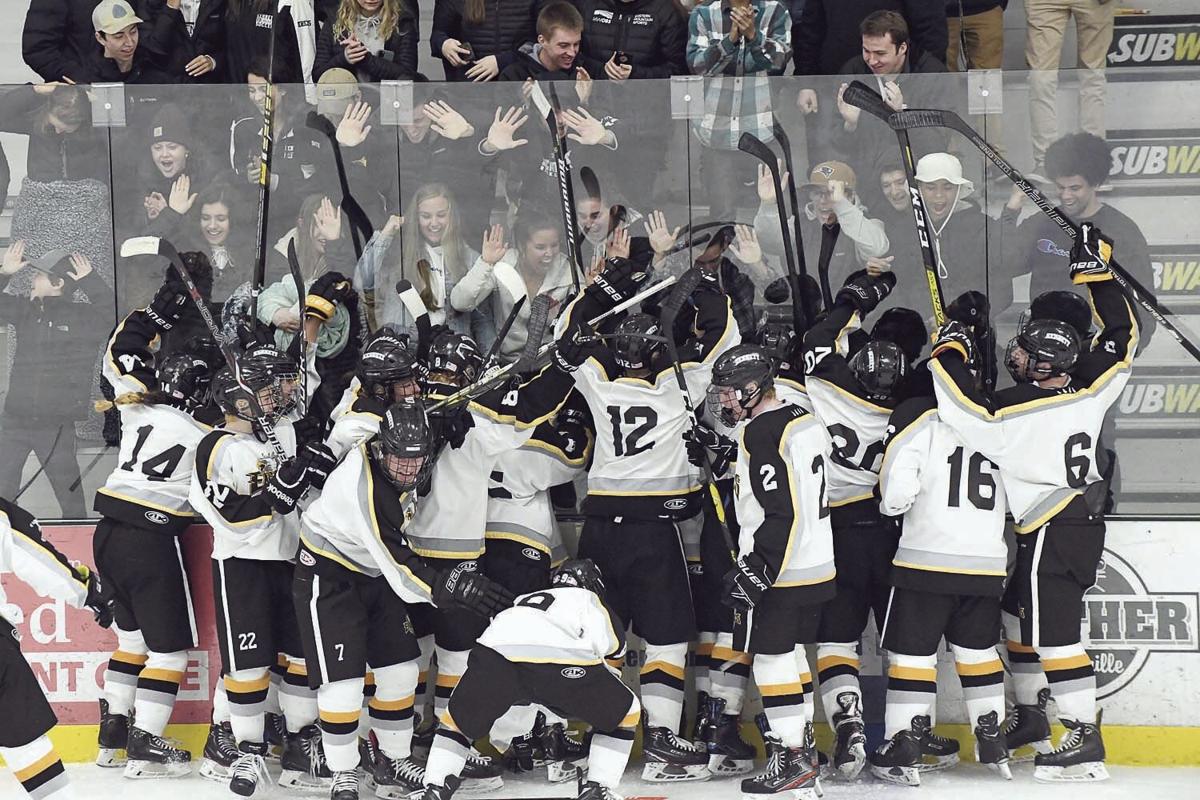 Members of the Kennett High ice hockey team celebrate with classmates after the final horn sounded in an 8-0 semifinal victory over ConVal-Conant at Plymouth State University on March 11. Little did anyone know that two days later the winter sports season would be canceled due to COVID-19. (JAMIE GEMMITI PHOTO) 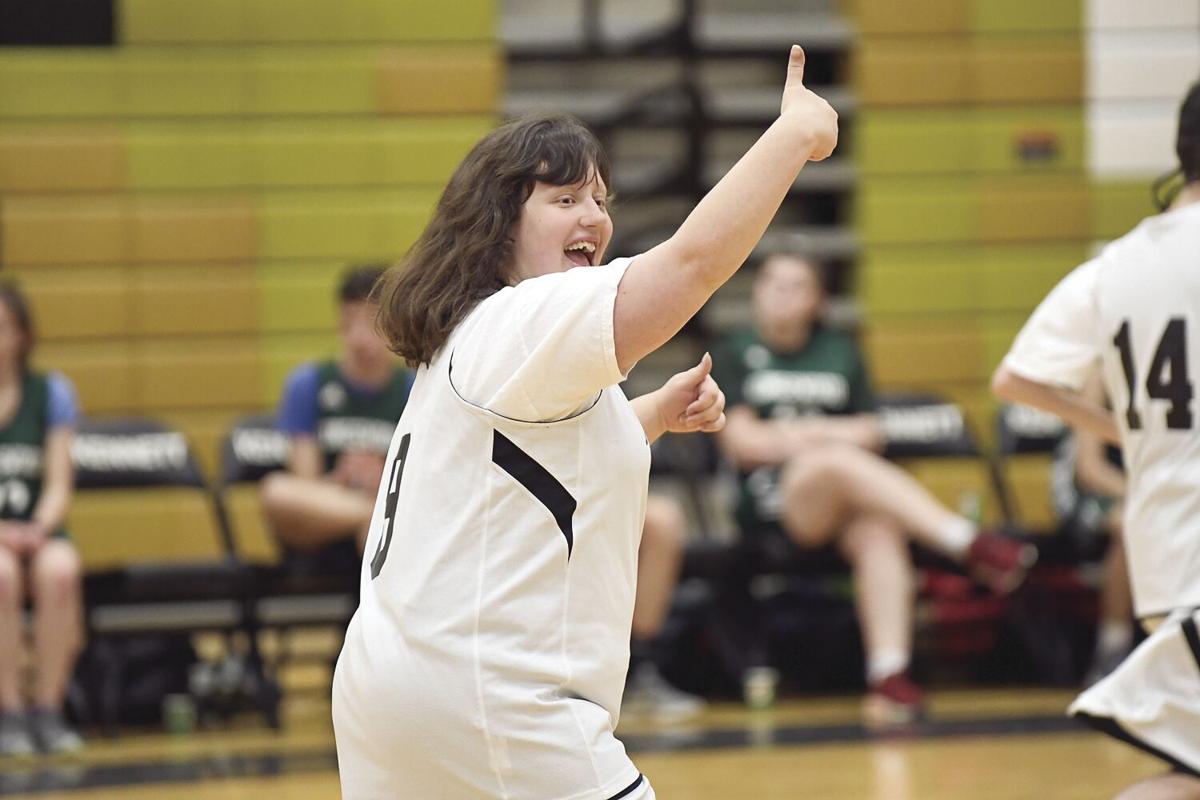 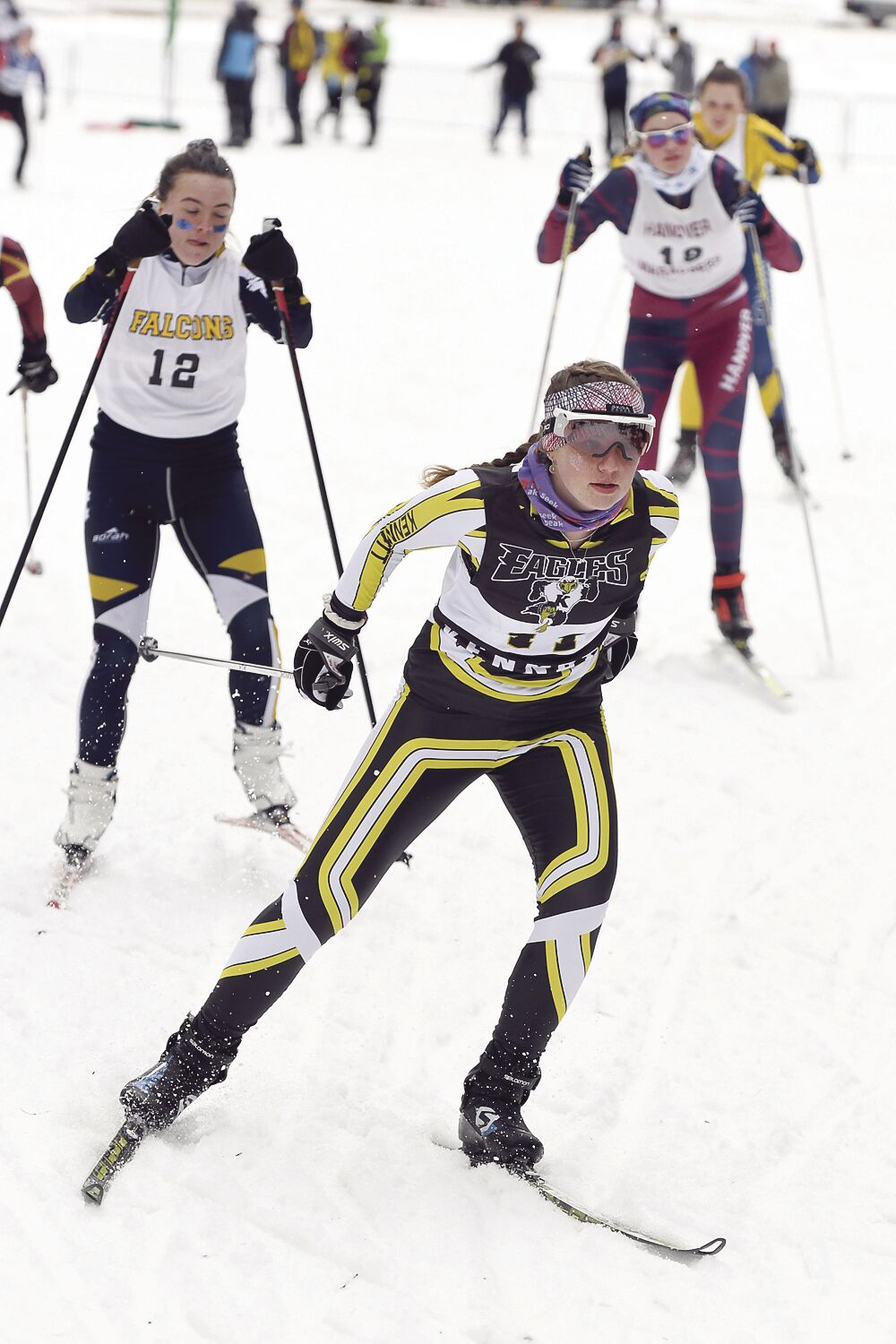 Helen Badger takes an early lead in her wave of racers on her way to win the girls freestyle race in the Division II State Meet at Great Glen Trails. (JAMIE GEMMITI PHOTO) 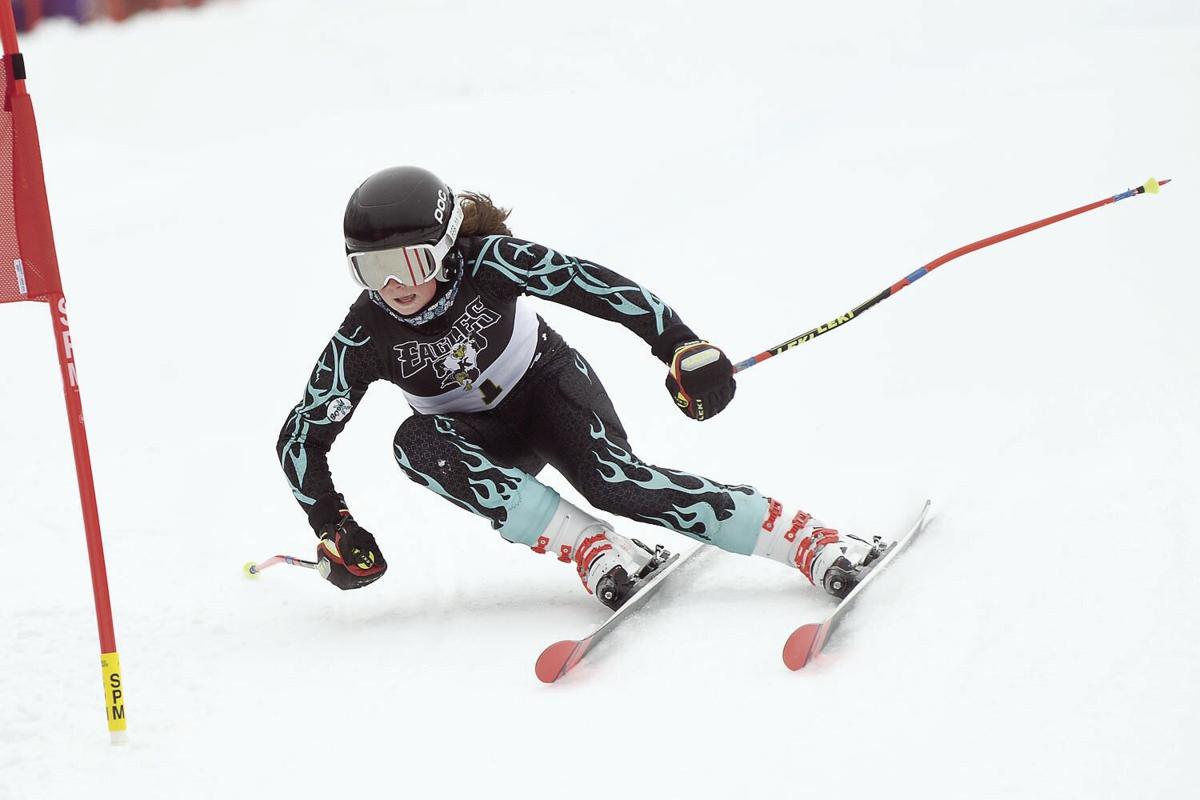 Kennett’s Ashley Garside is the state giant slalom champion and she helped the Eagles win the state alpine championship at Cranmore on Feb. 11. (JAMIE GEMMITI PHOTO)

Liz Cote, the lone senior on the Kennett High girls' basketball team, is introduced on Senior Night prior to the final game against Hanover. (JAMIE GEMMITI PHOTO)

Members of the Kennett High ice hockey team celebrate with classmates after the final horn sounded in an 8-0 semifinal victory over ConVal-Conant at Plymouth State University on March 11. Little did anyone know that two days later the winter sports season would be canceled due to COVID-19. (JAMIE GEMMITI PHOTO)

Helen Badger takes an early lead in her wave of racers on her way to win the girls freestyle race in the Division II State Meet at Great Glen Trails. (JAMIE GEMMITI PHOTO)

Kennett’s Ashley Garside is the state giant slalom champion and she helped the Eagles win the state alpine championship at Cranmore on Feb. 11. (JAMIE GEMMITI PHOTO)

To many, the best thing about 2020 was seeing it in the rearview mirror. It was a year that started out with such promise and optimism with winter sports kick off the year with a number of great games and exciting finishes. Unfortunately, one day, Friday, March 13, of all days, changed the high school sports landscape and that landscape still looks different in 2021.

On Jan. 17, the Kennett High girls’ basketball team put the defensive clamps on high-scoring visiting Bishop Brady to win a 58-55 thriller at the Peter Ames Gymnasium.

“It was an awesome game to win,” said Larry Meader, Eagles’ head coach. “The girls executed the game plan almost to perfection, especially in the first half. Brady likes to run and shoot the first three-pointer they get. We did a great job of limiting their second and third scoring opportunities. If we had an easy fast-break we took it otherwise we tried to limit (Brady’s) possessions. To hold a team like that to just 17 points in the first half was impressive.”

Over 90 people turned out on Jan. 20 for an exciting Unified basketball game that went right done to the wire when Kennett High hosted Kingswood in its second game of the season.

The visiting Knights came out on top with a 50-46 win in an entertaining contest, but everyone was a winner on this day, including the players, who were beaming from opening warm-ups to the final whistle and post-game pizza party for both schools; proud parents, some with tears in their eyes; faculty members cheering throughout for both teams; and the casual observer who might have just dropped by the Peter Ames Gymnasium to see what one of newest New Hampshire Interscholastic Athletic Association's sport was all about and immediately became hooked.

It was the final game of Leah Jones’ career. The energetic, wide-smiling Leah turned 21 in December and left the nest four days later. She had a grand time on the hardwood, scoring 16 points, and with each basket, her grin got even wider.

On Jan. 23, Kennett High boys’ basketball team rallied from an 8-point fourth-quarter deficit to beat Laconia in an overtime thriller 62-59 at Peter Ames Gymnasium sending fans of the hometown flock home with smiles on their face but emotionally drained.

“It’s the way they like it,” Coach Jack Loynd said following the win. “(Laughing) I don’t think anyone who knows our basketball team doesn’t know why I have high blood pressure.”

Trailing 46-38 after three quarters, the Eagles clawed their way back and drew level with 44 seconds to play when Grady Livingston calmly sank two clutch foul shots. Free throws proved to be the difference on the night, especially in overtime, knocking down all four attempts. Kennett was 14-19 from the line (73.7 percent), while Laconia shot 14-25 (56 percent). Seniors Wyatt Arriaga and Justin Olson led all scorers with 17 points apiece in the win.

For years the Fryeburg Academy boys’ alpine team struggled to field enough skiers to post a team result in meets. That’s not the case anymore — the Raiders are the 2020 Western Maine Alpine team champions after a fantastic day on the slopes at Shawnee Peak in Bridgton, Maine on Feb. 5. The Fryeburg boys scored 69 points to win the championship, topping runner-up Greely (104).

The Fryeburg Academy boys’ and girls’ cross-country teams hosted the Western Maine Conference Championships the first week in February. FA sophomore Alanna Nataluk had a great showing, winning the skate race, placing third in the classic and second overall in the pursuit.

In the GS, Fryeburg junior Will Marshall was fourth after the first run but turned in the fastest second run (40.36) by more than a second to win the race in 1:21.20. He was joined on the podium by fellow Raider Matthew Gunther, who was third in 1:24.15.

“All four guys really showed tremendous improvement — they all set PRs,” Bernie Livingston, Eagles’ head coach said. “The handoffs were outstanding. I was really happy with how well they all performed.”

After Hanover snapped Kennett High girls’ alpine team’s record-setting six-year run as champs at Pats Peak in Henniker in 2019, the hometown Eagles were all business on Feb. 10 at Cranmore Resort and took care of business, too, winning the morning GS and the afternoon slalom team events to win the championship. Kennett won the overall title with 761 points, topping Hanover, 720.

Individually, Kennett’s Ashley Garside is the state giant slalom champion, while teammate Mackenzie Carr was the runner up in GS. Skyler Sayers also had a podium finish for the hometown flock, placing third in the slalom.

Individually, three Eagles landed on the podium twice during the day. Seniors Helen Badger and Grace Castonguay finished first and second in both the morning classic and afternoon freestyle (skate) races. For the boys, sophomore Theo Castonguay was third overall in both races.

“It was a great day of high school ski racing,” said Steve Vosburgh, Eagles’ head coach. “Everyone competed to the best of their abilities. I’m proud of them all.”

On March 5, Coach Jack Loynd’s cardiac kids went down to the wire again, beating the Kingswood Knights 70-66 in overtime in Wolfeboro.

“Six overtime games this season, what’s new,” Loynd said, laughing. “Kingswood is a good team. While we’re not the most physically-gifted group, what I love is that they compete. They never feel like they’re out of a game.”

Overtime seemed like a popular theme for Kennett teams during the winter. The KHS hockey team went to overtime in the Division III quarterfinals when the No. 6 seeded Eagles scored a 4-3 victory over No. 3 Hollis-Brookline-Derryfield at Conway Arena in Nashua on March 7. Senior Miles Woodbury scored 3:21 into overtime sending the hometown flock to their 11th Frozen Four in 13 years.

“This was a big win for our program and I’m really happy for this team,” Coach Michael Lane said. “They overcame a lot of adversity this winter with our injuries and they fought through it. I wouldn’t say it was puck luck, we earned this.”

Woodbury continued to have the hot hand in the playoffs when he lit the lamp four times in an 8-0 semifinal victory over ConVal-Conant at Plymouth State University Ice Arena on March 11.

A day after announcing that postseason hockey and basketball games would proceed with some attendance restrictions, the New Hampshire Interscholastic Athletic Association on Friday, March 13 suspended all tournament games.

“It’s the first time on All-State for all three of them,” said Michael Lane, Eagles’ head coach. “I’m happy for Connor, Miles and Bryson, they’re all very deserving of the honor.”

While both Berlin and Kennett High would have preferred to settle the Division III State Hockey Finals on the ice, the New Hampshire Interscholastic Athletic Association announced on March 23 that due to the final game being called off, the Mountaineers and Eagles will be co-champions.

Meanwhile, the No. 7 Kennett boys’ basketball team, which had reached the Elite 8 in Division II and was scheduled to play No. 2 seed Bow in the quarterfinals on March 12, has been bestowed state runner-up honors along with five other schools (Oyster River, Hollis-Brookline, Hanover, Pelham and Lebanon). Bow and No. 1 seed ConVal, which had identical 18-1 records, were crowned co-champions.

Michael Lane, head hockey coach for Kennett High, reacted by saying, “That’s some good news amid all this chaos.

“I’m happy for our seniors. They did all they could, and to see them go out on top means a lot. No one wanted to win the championship this way. We all wanted to see the championship settled on the ice. It’s no one's fault. The NHIAA was put in a tough spot and made the best decision it felt it could."

2020 was a sports year like no other we’ve seen