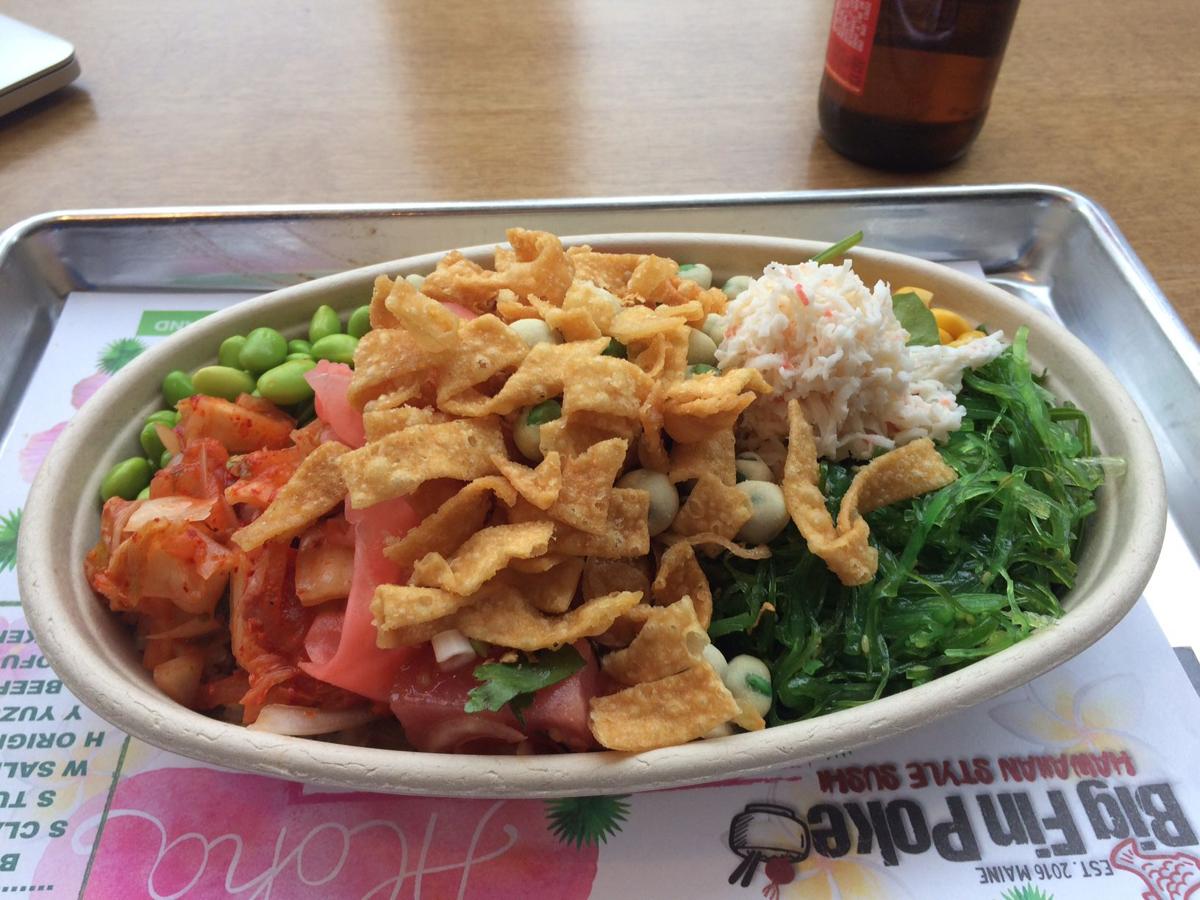 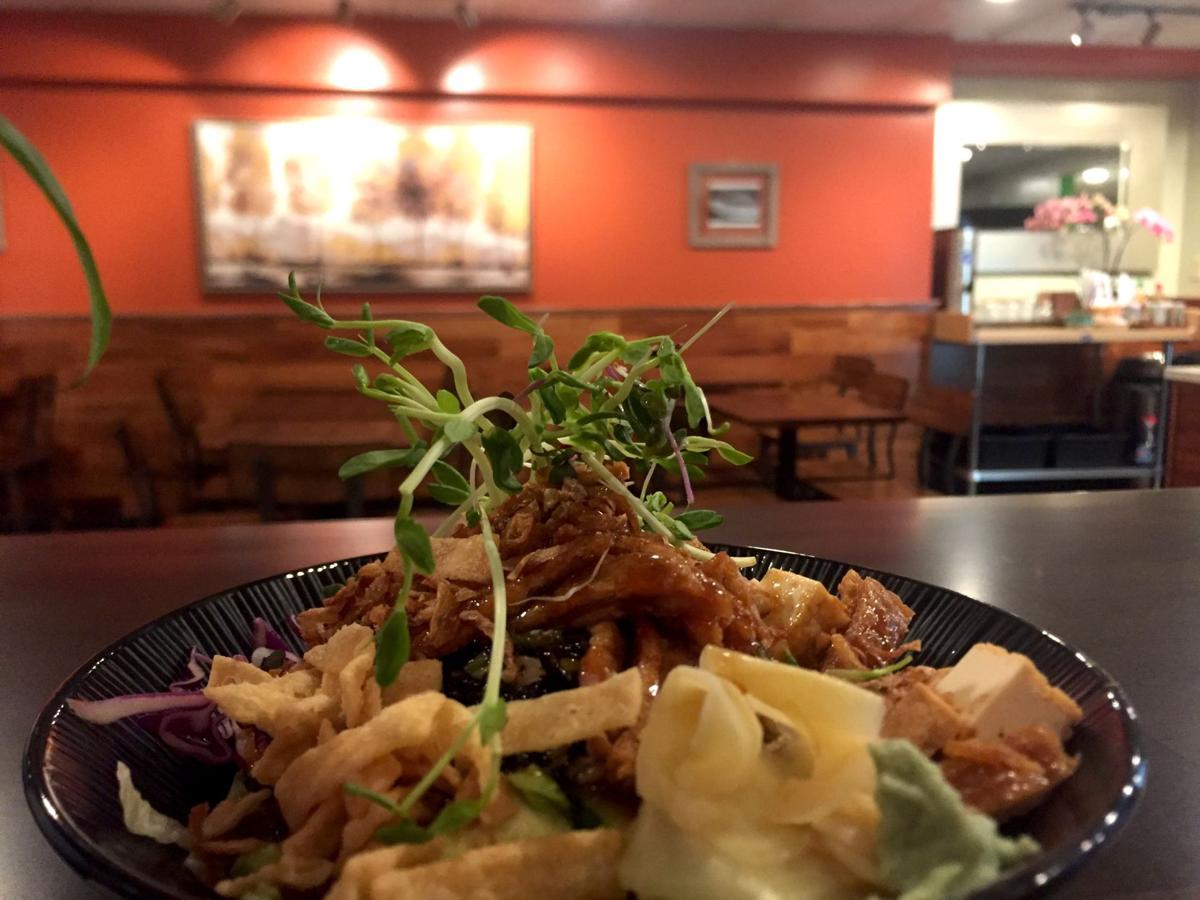 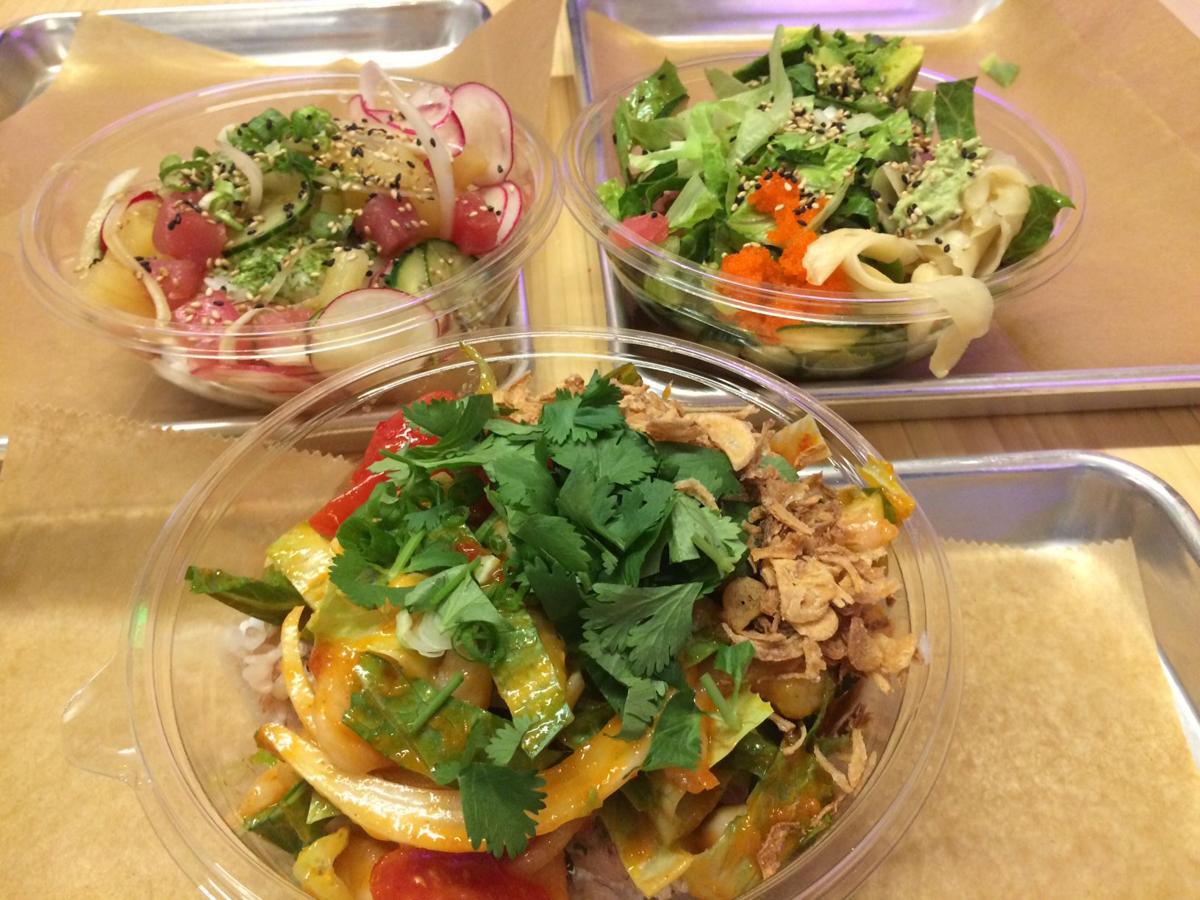 Every recent year some new thing descends upon us here in Portland — luxury condos, kayaks for rent, people from Brooklyn, Subaru Crosstreks. Like biblical horsemen, they portend the coming (cultural/political/environmental) apocalypse. But the most recent and telling sign of end-times may be the proliferation of poke restaurants. No new arrival in town has harmonized so sweetly with the particulars of our coming annihilation. When the angry, rising oceans reveal just how tenuous are the accomplishments of “civilization,” the poke bowl will make for a worthy last meal.

When that day comes, there should be plenty to go around, with four restaurants now devoted to poke in the area (Poke Pop, Crunchy Poke, and Big Fin Poke in two locations). Each does poke in the “California” style: cubed raw fish splashed with sauce, and then paired with rice and various accoutrements in a healthy-seeming bowl. In Hawaii the fish (usually ahi), sits in a marinade (usually sesame and soy), and is served by the scoop with sides. Here the approach is more like Chipotle or a salad place. You get less fish and less full. (Ours costs less too — around $11 a bowl.)

And what you get is pretty good, especially if you don’t choose yourself. While Crunch and Pop emphasize the house’s pre-designed combinations, Big Fin’s chalkboard is dominated by a “build your own” section, nudging you to select from dozens of “mix-ins” and toppings and proteins. Inevitably you choose too many, and the toppings pile up in the wide paper bowl. What are you gonna do, not get more stuff? If we had that kind of restraint we would not be in this mess.

At Big Fin it can be hard to find the chunks of ahi and hamachi tucked in with your onions, kimchi, seaweed, edamame, crab salad, corn, greens, etc. When you do, the yellowtail is creamy and sweet, the tuna with a touch more chew. The gochu sauce tasted of spicy seaweed, in a good way. Their “house favorite” poke bowls are barely more restrained in piling on ingredients. Big Fin’s original location has a nice counter, looking out big windows onto Westbrook’s main street. Their new South Portland location, because it is in a strip mall, seems more Hawaiian even if the poke is not.

The West End’s Poke Pop has self-conscious style with a Japanese energy and aesthetic. Their clever fishbowl logo appears in neon up front, and a projection of it spins on the floor. An LCD screen scrolls through Yelp reviews of what you are already there to eat. It feels manic, but the house bowls at Pop show some restraint. The “classic Hawaiian” — rather simple with a light spicy/sweet sauce, green onion, cucumber and radish — is marred only by pineapple. The ahi is a lovely pale pink.

Poke Pop’s “chirashi” bowl is named for the Japanese dish of rice, fish and vegetables that mainland poke actually resembles. The flavors are Japanese too, with creamy wasabi, sesame, and a strong dash of earthy furikake. It is a good bowl, though the orange roe seemed dry, and the lettuce excessive. The space is spartan, a single row of tables under a swooping modernist wood awning.

In the Old Port, Crunchy Poke is the newest and most pleasing of the bunch. The proprietors, a couple, have easy charm. Their ingredients seem a cut above, and the bowls more lovingly crafted. You appreciate details like ginger soaked in beet juice, mellowed in flavor and brightened in color. In addition to the typical bright and crunchy wakame seaweed, they offer a dark and funky hijiki. The bowls feature bigger chunks of redder tuna, pale yellowtail, and bright salmon. The vibrant masago roe have crunch and pop.

Crunchy Poke offers as many add-on options as Big Fin. But since (if you skip their “signature” bowls) you choose with the help of paper and pencil, it encourages thoughtfulness and self-control. Their very good “house poke” features all three fish, both dark and bright seaweeds, and chewy lotus root, touched with a spicy sesame-shoyu sauce. A spicy tuna bowl features the only marinated fish in all of Portland poke. It is the closest thing in town to the Hawaiian original.

Crunchy’s ceramic bowls class the experience up, as do the leafy sprigs perched on top. The room is bright, as rooms are in all of Portland’s poke spots, which highlights the lovely colors these poke bowls display — the ahi pinks and seaweed greens, the vivid oranges of salmon and roe. Some ingredients seem chosen exclusively for their aesthetic contribution to the appearance of the bowls.

Of course, the horses of the apocalypse will come in striking colors too — the exact same colors (white, red, black and pale) as the Crosstrek (Revelations 6:2, look it up!). While the rest of the globe receives their own forewarnings of the end times — this week Bolsonaro’s victory and Merkel’s retirement come to mind — it is appropriate that here in Portland the portents involve all-wheel drive and food trends. These poke places may brag of organic ingredients; meanwhile, the murmur of Thanatos calls us to return to the inorganic.

It is common to note that mainland poke does not respect Hawaiian heritage. In fact, our lighter/healthier approach disrespects Hawaii’s dark futurism. Poke’s original incarnation reflected the ocean’s effortless abundance: a simple mix of seaweed, salt and shore-fish. Now the oceans absorb our abundant heat, and we pillage the dwindling remnants of sea-life. Contemporary Hawaiian poke — in which huge servings of ahi (adopted to suit Japanese tastes) are often paired with heavy pasta salads — makes no concessions to health or sustainability.

And why should it? In Hawaii the land spits fire and poison, phones buzz with nuclear missile warnings, and billionaires privatize and bunkerize whole islands. Why not embrace, and taste, the end times upon us? There is an app (weCroak) that periodically reminds you that you will die. It is supposed to give you perspective and peace. The poke bowl can accomplish the same thing on a cultural/culinary level. Let’s not be fooled by the light and bright flavors, colors, and attitudes of Portland’s new poke scene. As the oceans rise we will vainly seek higher ground, as Revelations 6:16 warns, “in the rocks of the mountains,… hiding from the wrath” of the sea. We might as well consume what the oceans offer while we can.